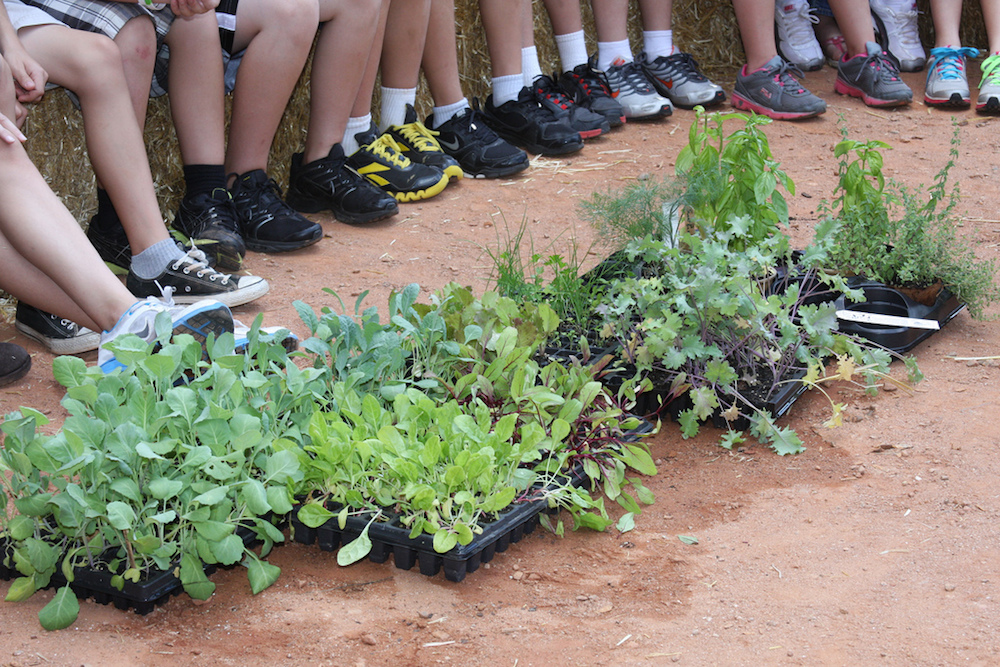 I worked all of my life as a costumer. Feature films (from The Outsiders to Spiderman 2) and television series took me across the world—from Tulsa, Oklahoma and Austin, Texas to communist Poland and Paris. My husband was also a costume designer, and we raised our two daughters on set; they grew up traveling in trunks. They grew up to be costumers, too.

When my granddaughter, Veronica, was born six years ago, I knew I wanted to be a deeply connected part of her life. I believe that involvement—being there—is what makes a difference. So, after 50 years in the business, I retired.

I started to pick up Veronica at school—and stay with her until I put her to bed. And then there came Wednesdays, my day to be at her elementary school’s garden. It began at 10:30 AM, when Veronica and her 40 classmates arrive. They were in the garden for 45 minutes. I was there all day long, working with each class up to fifth grade. At the end of the day, I couldn’t be more tired.

Every session in the garden starts the same way. The five- and six-year-olds are greeted by Charlie Herman-Wurmfeld, a director who lives up the street and is something of a dream weaver. Charlie always calls them “young scholars,” sits them in a circle, and speaks of gentleness: how the children can be gentle to themselves, to others, to their families, and to the garden. He says that the word of the garden is gentleness. And he speaks of the importance of the circle—the idea that in a garden, in nature, in a community, what goes around comes around.

Charlie finishes, and, like a flash flood, forty children are suddenly noisily streaming toward me and another parent volunteer. We wait in the outdoor kitchen, where we’ve put out bowls of cut-up cantaloupe, watermelon, and cucumbers. We’ve made pitchers of water with limes and mint. All of this bounty was grown in this garden. The children attack the fruit as if they were on a desert island.

When the young scholars have finished eating, they are shepherded by their teachers—in small groups to visit various parts of the garden. Charlie shows his group how not to act around bees. He does a wonderful silly dance and they all laugh. But his point is made. They stand quietly so as not to disturb the swarm of bees harvesting nectar from the basil. Miss Amy has a group at the lavender. She demonstrates how they can rub their hands together over the blossoms and breathe in the calming effect of the aroma. Miss Abbe has taken her group to the corn that her son planted the previous year. She explains how corn is pollinated as she walks the children through the stalks. Over in another section of the garden, some of the children have formed their own group at the piano. Their teacher, Mr. Sanchez, tells me that one of the parents comes in the classroom and teaches music to his class. They’re singing, “Let it Be.”

When I decided to volunteer in Veronica’s school, I thought I’d be in the classroom working with the teachers. But at an introductory barbecue for new students, one parent, Helen, handed me a clipboard and urged me to “sign up for the garden..” A few weeks later I stepped into the garden for the first time. We were doing a major clean up after summer break. The mice had moved in and it was up to us to move them out. The day ended in exhaustion and a wonderful sense of accomplishment. The team spoke of schedules and classes and teaching. I could only sit in the shade and wonder what I had gotten myself into.

Now Every Wednesday in the garden brings new groups and new adventures. A little girl finds a handful of slugs. She comes running up to me with her open hands covered in squirming blobs. I direct her to the chicken cage where those chickens peck her palms clean. Suddenly all the children turn into slug finders—racing all over the garden in complete glee looking for slugs. It gets hot and we fill cups with Helen’s magic water potion. The children want to make more. So I take them to the mint.

There is chopping to be done in wheelbarrows for the compost and a solar powered fountain that needs to be re-installed. There’s a red-and-black bug that we’ve never seen. It turns out to be a Box Elder bug, sometimes called a Halloween bug because it shows up in the garden in September and October. We find a family of ladybugs—a hundred teeny little specks moving around on the leaf with their adult ladybugs. We all get surprised by giant green flying beetles that send the children screaming. But not in a frightened way; they are laugh-screaming. Then there are milkweed seed pods, which the children call flying seeds. That’s such fun. They send the fluffy white puffs over the fence where they travel onto Sunset Boulevard and beyond.

The garden has connected Veronica and me even more. We take the lessons from the school garden to our own gardens. We’ll plant cuttings. We’ll plant seeds. She and I communicate a great deal in the garden—more so than if that wasn’t the focal point.

One thing I love about grandparenting—and volunteering—is the luxury of having a single focus. I can devote myself to my granddaughter when she is with me, or to the garden when I’m there. I don’t have to juggle so many things, like parents do, or like costumers do—wrangling 14 hours a day, getting actors dressed, keeping designers happy. I see this as a way of paying back for days when I didn’t have the focus for my own children.

At the end of the school day, all the kindergarteners are wrangled onto the play-yard and released to their caretakers. The other day, I was waiting on that side of the fence, with the parents, when a small gaggle of boys noticed me.

“Hey, you live in the garden!” they shouted.