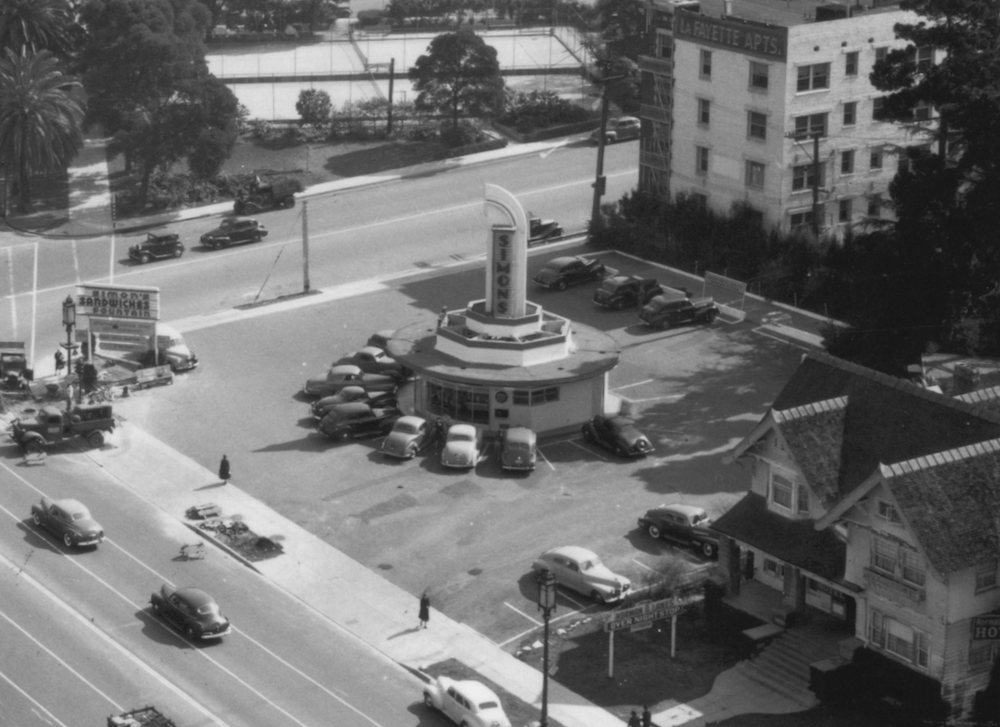 When I first moved into the Rampart neighborhood of Los Angeles in 1986, the gunfire down the alley outside our bedroom often kept me awake at night—not just the pop-pop of single shots but the stuttering rat-a-tat of automatic weapons. Police helicopters beat the air overhead, seemingly for hours at a time, shining down bright conical beams that swept across the windows.

There was a kind of Blade Runner feeling to the neighborhood in those days, the sense that things had gotten out of hand, and the citizens were scuttling for cover, beneath some perpetual eye in the sky. It was funny to think that in 1910 this was the toniest neighborhood in L.A., the place where Otis Chandler built his mansion. It’s also where Raymond Chandler first lived when he moved to the city in 1912, and where he set one of his earliest stories, Pearls Are A Nuisance. The old lady in that story whose pearls have been stolen lived on my street, Carondelet.

I settled into the 1930s Spanish-style apartment building the summer I married my husband, artist-photographer Anthony Hernandez. He had lived in the apartment since returning from Vietnam in 1970. The rent was cheap, and we were young and committed to living off our art. I had just sold my first book, a collection of short stories, and begun working on a novel. He was about to begin a body of work called Landscapes for the Homeless. It was an exciting time, and an exciting neighborhood—the sort of place a person could write about or photograph.

The desk where I wrote looked down on the alley where a lot of the action took place. Teenage kids gathered there to smoke dope, and elderly Mexican men sat playing cards in an open garage lined with girlie pictures. Every day, the grandmothers came out to do their shopping from the vegetable trucks that plied the area, or buy tamales from a guy who sold them out of the trunk of his car.

There were a lot of homeless people in the neighborhood in those days, drifting between Lafayette and MacArthur parks. Most days, I awoke in darkness to the sound of a shopping cart rattling down the brick-lined alley, the cans and bottles jouncing against the metal as the early bird recyclers headed out at 3 or 4 a.m. in order to get a jump on their competitors.

After I long day of writing, I would head out in the afternoon and ride my bike over to the Ambassador Hotel. You could join a swim club there and use the pool. It was still a beautiful place in those days, though going slightly to seed. I rode down Rampart Boulevard and through Lafayette Park, weaving my way through the groups of homeless men hanging out on the benches, often stopping to talk with a guy named Tommy. He had a bum leg, and was once a short-order cook before living on the street. He drank too much, but he was a sweetie and we soon became friends. 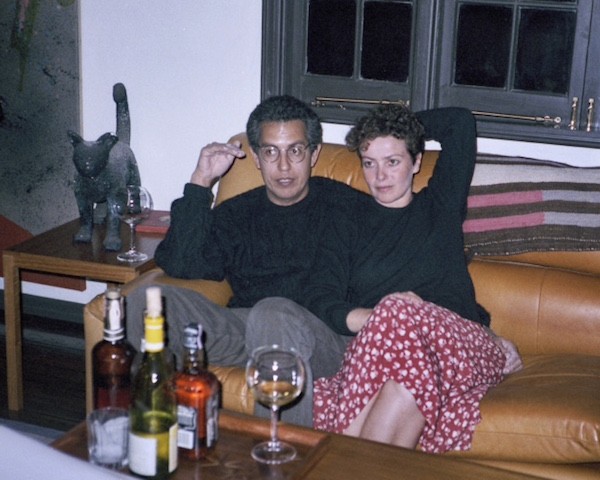 Anthony Hernandez and Judith Freeman, around the time they were married in 1986

I started taking pictures every day, carrying a 35-millimeter camera on my walks and rides through the neighborhood. I photographed Tommy and other homeless men, the beautiful children of Salvadoran and Mexican immigrants who were playing on the sidewalks, and mothers pushing strollers to and from the Big 6 Market. Making pictures became a way of taking a harder look at the neighborhood, which eventually found its way into the novel I was then writing, The Chinchilla Farm.

When the Ambassador finally closed, I moved over to the Sheraton Townhouse where there was also a lovely pool. A lot of Europeans stayed in the Townhouse, having booked their visits without knowing that the area became rough after dark when the spectral figures of pushers and addicts began emerging from the bushes in the park across the way.

The European visitors always asked the same questions when they realized I was a local: Where is the city center, and how do you get there? They knew they’d somehow landed in no man’s land.

In time, the Townhouse closed, a victim of the unrest that followed the beating of Rodney King, and the area went even further downhill. The little nearby public library—the Felipe de Nueve branch—was also closed, leaving the homeless to find somewhere else to take their afternoon naps.

By the mid-1990s, it was hard to find a patch of living grass in LaFayette Park. The Townhouse Hotel was transformed into low-cost housing, its pool cemented in, the garden walls topped with razor wire. The bright white neon sign atop its roof that for decades had proudly spelled out TOWNHOUSE gradually began to go dark, letter by letter, until all that was left was an O, as in O, neighborhood! What has happened to you?

A police substation was installed in MacArthur Park with round-the-clock patrols. Otis Art Institute, where I had once seen a performance artist belt out an edgy rendition of “It’s My Party and I’ll Cry If I Want To” while sticking Ritz crackers covered in Cheese Whiz to her naked body, moved to a safer neighborhood out by the airport. With the closing of Otis, and the Ambassador, and the Townhouse, as well as the little library, it began to feel as if the neighborhood, or at least a part of it, was slowly dying, a victim of economic desertion, the recent unrest, and neglect.

What few people fully understood then was how a cadre of truly rotten cops from the Rampart narcotics division had been terrorizing locals for years, extorting money, planting evidence, stealing drugs, even shooting people. They covered up their crimes with lies and violence against an easily intimidated immigrant population. When the Rampart police story broke, it became a national scandal and shocked people. But somehow it didn’t surprise me.

I had seen the young men limping down sidewalks, walking with canes, victims of the endemic violence. I’d passed the little shrines set up on sidewalks to commemorate the dead. I’d watched the cops harassing citizens—wearing the signature mirrored glasses and sometimes even smoking cigars while they frisked kids lined up against brick walls.

Rampart has always served as a place where filmmakers could find an edge, whether it was locations for Barfly (the Bryson Apartments and Silver Dollar Bar), or the more recent Drive (Big Six Market), or the little wooden houses shown in the opening scenes of L.A. Confidential. The television show Adam-12 (1968 to 1975) followed two cops—one played by Martin Milner, who died recently—in LAPD’s Rampart Division station. If you wanted tough, noir, or seedy and run-down, Rampart was your district, even though lots of ordinary families lived in those older apartments and houses.

Over the years I’ve watched the neighborhood change, but really not that much. There’s less violence these days, almost no gunfire at night, and gang activity isn’t much visible, though there’s also not much evidence of gentrification going on—just a remodeled house here and there, proof that the Silver-Lake-Echo-Park crowd is searching for something cheaper in the adjoining turf. That’s probably a good thing for the immigrant families who in large part still make up the neighborhood: they can continue to afford to live here. No upscale coffee shops or cafes have moved in, there’s still only Maggie’s Donuts and the Taco Bell, and the little pupusa place and marisco joint, and of course the original Tommy’s Hamburgers, which opened back in 1946.

The little branch library has reopened, though unfortunately there are more homeless than ever on the streets, and occasionally something happens to remind you Rampart’s still a tough place. Last spring we returned from an early dinner with friends to find the neighborhood on lock-down. We were stopped at the head of our street by a cop who, after learning our address, told us we couldn’t go home. A man with a rifle was holding a woman hostage in the apartment building next to ours.

So we killed some time by visiting friends who lived in Silver Lake, monitoring the unfolding hostage situation on the news, until finally we heard it was over and could head home around midnight. The cops had set up an impressive command center on Beverly Boulevard which they were in the process of dismantling, removing the last scarlet flares from the road so we could pass. It’s funny to think Anthony has lived in our apartment for 45 years and I’ve been there almost 30. I sometimes think we’re going for the record—artist who has lived in the same Los Angeles apartment for the longest number of years. The rent has hardly changed in all that time. It’s worked out the way we hoped it would, allowing us to live simply and pursue our art without taking jobs. In that sense you could say the neighborhood has been very kind to us. We feel we owe it a lot.