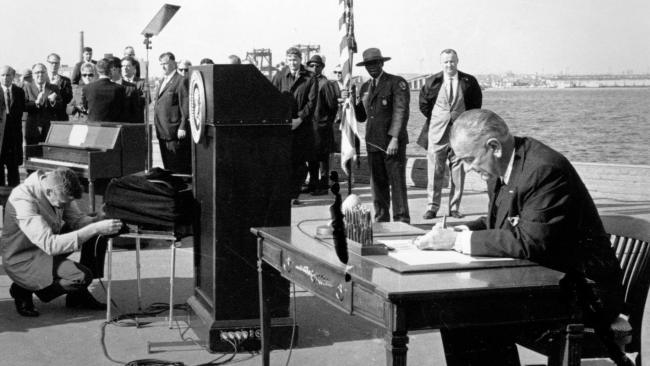 At a time when immigration has become a polarizing and toxic topic in our politics, it’s worth remembering that 50 years ago this week President Lyndon B. Johnson signed the Immigration and Nationality Act into law at the foot of the Statue of Liberty. Part of the trilogy of civil rights acts that outlawed discrimination in American life, the 1965 Immigration Act transformed America. Record numbers of new immigrants have arrived in the subsequent five decades—along with border fences, detention centers, and xenophobia. A look back at the 1965 Act helps us understand how we got to where we are today and how we might move forward in the future.

The immigration system that was in place prior to 1965 was highly discriminatory. A century of immigration law had excluded several categories of people, including criminals, prostitutes, paupers, lunatics, idiots, those likely to become public charges, contract laborers, polygamists, anarchists, illiterates, and aliens convicted of a crime involving “moral turpitude,” a clause aimed at gays and lesbians. Asian immigrants were also mostly barred through specific exclusion laws like the Chinese Exclusion Act of 1882, the 1917 Immigration Act with its “Asiatic Barred Zone,” and through diplomatic agreements. Based on blatant race prejudice that considered the so-called “Nordic” and “Anglo Saxon” “races” to be the “purest” types of immigrants, the 1924 Johnson-Reed Act restricted immigration even further. It created a system of numerical annual quotas that allowed in greater numbers of immigrants from northern Europe while restricting immigration from southern and eastern Europe and barring even more immigration from Asia. Immigration plummeted, and by the 1960s, immigration to the United States was at a historic low.

The road to immigration reform began during World War II when some of the most egregious laws excluding Asian immigrants were repealed to reflect our new alliances with China, India, and the Philippines. Token numbers of immigrants from those countries—around 100 each—were let into the U.S. Some limited reform measures were also enacted in the 1952 Immigration and Nationality Act. By the 1960s, strong leadership on immigration reform came from the White House under President John F. Kennedy, whose 1958 book, A Nation of Immigrants, was an unabashed celebration of America’s immigrant heritage and a call for immigration reform.

Kennedy presented Congress with his proposal to revise and modernize the country’s immigration laws in July 1963, just over four months before he was assassinated. The bill was meant to “serve the national interest and reflect in every detail the principals of equality and human dignity to which our nation subscribes.” Foreign policy was also a consideration: At a time when the United States emphasized its virtues of freedom and democracy over the totalitarianism of communism, the unequal treatment of immigrants based on race exposed America’s hypocrisy. Following Kennedy’s death, President Johnson embraced the cause of immigration reform and declared the current system to be “incompatible with our basic American tradition.”

Passed in the aftermath of the landmark Civil Rights and Voting Rights Acts, the 1965 Immigration and Nationality Act (also known as the Hart-Cellar Act) had four major provisions. It abolished the old quota system that unequally distributed immigrant visas based on national origin; explicitly prohibited discrimination on the basis of race, sex, nationality, place of birth, or place of residence in the U.S. government’s decisions to issue immigrant visas; established a new preference system based on professional status and family reunification; and, lastly, set global and per-country ceilings on the annual number of immigrants that were the same for every country. For the first time, however, restrictions were placed on immigration from other countries in the Americas. In other words, the law diversified the sources of immigration while allowing the U.S. to continue to pick and choose which immigrants it wanted, but instead of using race and nationality as the primary criteria for admission, the law placed a premium on skills and family ties.

When President Johnson signed the bill into law, he praised its egalitarianism while downplaying any massive societal change it might cause. The new law, he claimed, repaired a “very deep and painful flaw in the fabric of American justice,” and as such, was “one of the most important acts” of his administration. But the president also hinted that no dramatic increase in immigration would result. This was not a “revolutionary bill,” he declared, and it would “not affect the lives of millions [or] reshape the structure of our daily lives.”

The president would be proven wrong: A half-century later, the United States has been transformed, and millions of immigrant lives have been affected—if in very different ways.

America’s foreign-born population now numbers nearly 41 million, or around 13 percent of the total population, not far off the historical high of nearly 15 percent in 1890. Immigrants are settling in places that have traditionally welcomed newcomers like New York City, San Francisco, and Chicago, as well as in other cities and areas where such large-scale immigration is new: Atlanta, Minneapolis-St. Paul, Charlotte, and Salt Lake City. Our immigration patterns have also shifted decisively away from Europe and towards Asia and Latin America.

No group has benefited more from the ’65 Act than Asian immigrants. Taking advantage of new pathways into the United States through family reunification and professional skills, Asian immigration has increased exponentially. After decades of being separated from loved ones, Asian immigrants sponsored family members in such large numbers that the 1965 Act was nicknamed the “brothers and sisters act.” Many are also recruited to work in certain industries, such as the high-tech sector. Asian immigrants receive about three quarters of H-1B visas granted to highly skilled “guest workers” today, and Chinese are now the single largest group of new arrivals coming into the country.

On the other hand, the new restrictions on immigration from the Western Hemisphere dramatically reduced other immigrants’ access to the United States. The 20,000 spots granted to Mexico were just a fraction of the more than 400,000 immigrants and temporary workers who had been admitted into the U.S. each year from Mexico in the decade prior to 1965. Mexicans could still apply for admission through the family reunification clause, but demand outweighed supply. The waiting list for visas grew quickly and was soon years-long for applications of Mexican citizens. Nowadays critics of unauthorized immigration complain that immigrants need to stand in “line” like others, without necessarily acknowledging that the line is almost 4.5 million people long.

The new law also left few options for unskilled and low-skilled workers to enter the U.S. just as global demand for such labor (in agriculture, industry, hospitality, and service) was increasing. The result was a perfect storm of conditions that allowed unauthorized immigration to grow to unprecedented levels by the end of the 20th century. The latest statistics from the Department of Homeland Security estimate that there are around 11.6 million immigrants living without authorization in the U.S. today, mostly from Mexico and Central America. In 2013, the Obama administration deported a record 438,421 unauthorized immigrants, continuing a trend of increased enforcement that has resulted in more than 2 million deportations during his administration.

The Immigration and Nationality Act of 1965 remains the cornerstone of U.S. immigration policy today, heralding a new era that was simultaneously more inclusive for some and more exclusionary for others. It’s now time to decide which of these legacies to advance into the future. We have not yet achieved President Johnson’s goal of establishing an immigration law that helps the United States create “a world without war [and] a world made safe for diversity, in which all men, goods, and ideas can freely move across every border and every boundary.” But the need has never been greater. As we become increasingly interconnected to each other across national borders through technology and transportation, we are no longer isolated from events halfway around the world. The current refugee crisis in Europe is likely not a singular anomaly, but rather a sign of things to come. As was the case in 1965, how the United States will respond to this new age of global migration will be another test of how it lives up to, or fails to live up to its values and its reputation as a “nation of immigrants.”