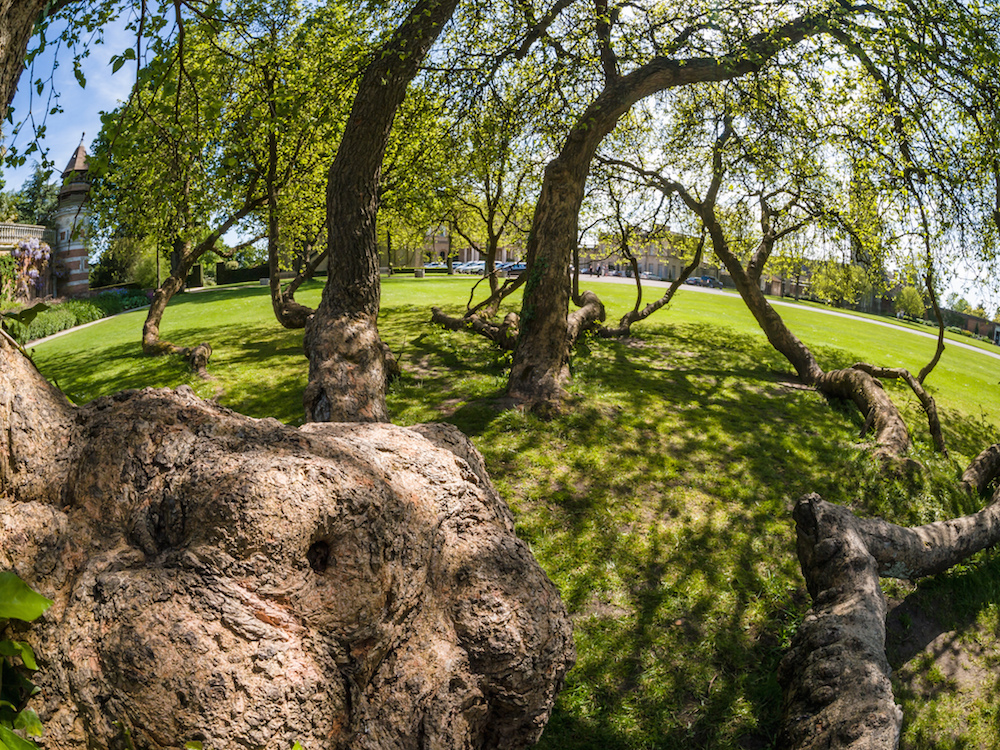 I.
The teenaged girl’s parents
knew not to wait till the night before prom
to tell her she couldn’t go.
They started watching her weeks earlier,
wiping lipstick off the landline and untangling
a net of hair from the shower drain.
There was the night she came home five minutes
past curfew. In chemistry, she failed
to bring up a B. Her father informed her that
all her privileges were henceforth revoked—
a sentence long enough to eclipse prom.
The girl agreed it was mostly her fault.

The night of the festivities, she sulked in her room,
wearing her bedspread like a cape.
She could hear the small-town drums beating.
She could almost hear the horns. From her window,
she watched a hooded, faceless man
walk out of the corn and up her street slowly
till he disappeared.
It was the first time something objectively scary
had not frightened her at all.

II.
The mulberry tree needed to come down.
It threatened the roof and the children of the house,
who couldn’t be trusted alone with its
rotten limbs and hollow trunk.
The man from Dayton said he could do it
for nine hundred dollars, but the man
from Baton Rouge bid eight.
Who saves that kind of money to fell a tree?
And then I remembered my father,
the agile climber, the day laborer, the drunk
who could always be depended on
to be looking for work.
The first day,
he harnessed himself to the top of the tree
and, by hand, tore its crackling branches off.
At twilight he demanded his pay
and on the second morning didn’t show.
The third evening he returned with a chain
hitched to the tailgate of a truck,
which he looped around the base of the tree
and pulled, madly, trying to extract it
like a loose tooth.
The tree didn’t budge.

Today is the fourth day.
Sweat pools on my father’s forehead
as he yanks the cord of the electric saw.
The machine is so loud I go inside.
I shudder when I hear the blade
make contact with the wood.
It certainly doesn’t sound hollow.
In the living room, I wait for the earth to shake,
clutching a handful of borrowed cash.

III.
I used to know a woman named Wanda
who’d been a flight attendant
in the ’70s, who said she almost didn’t get
the job because she was too tall.
Other girls were too wide or too heavy,
or their disposition was too
acidic, like stale coffee. This was before
airlines were more or less gobbled up
by conglomerates, when smokers
could still smoke. I watched
the loose skin around Wanda’s neck wobble
as she talked, feeling that it added some
pathos to her story. “You wouldn’t believe
how much thinner I was,” she leaned in,
the most elegant woman
on the plane, the most skilled in the art
of accommodation. Wanda was from Nebraska,
which to her was the size
of her father’s heavy, Catholic thumb.
Wanda no longer drank
but when I accepted the invitation to sleep
in her guest room
I discovered she kept a fully stocked bar
because it made her feel “classy.” She poured me
I can’t remember how many glasses of Scotch,
but it was more than I’d ever had.
The stories came faster than the drinks:
royals, restaurants, the names of various rivers
and cottages in Europe,
it all flew out of Wanda’s mouth and into my ears.
I was not expected to contribute.
I just had to drink, listen, and,
when I couldn’t take anymore, crash.