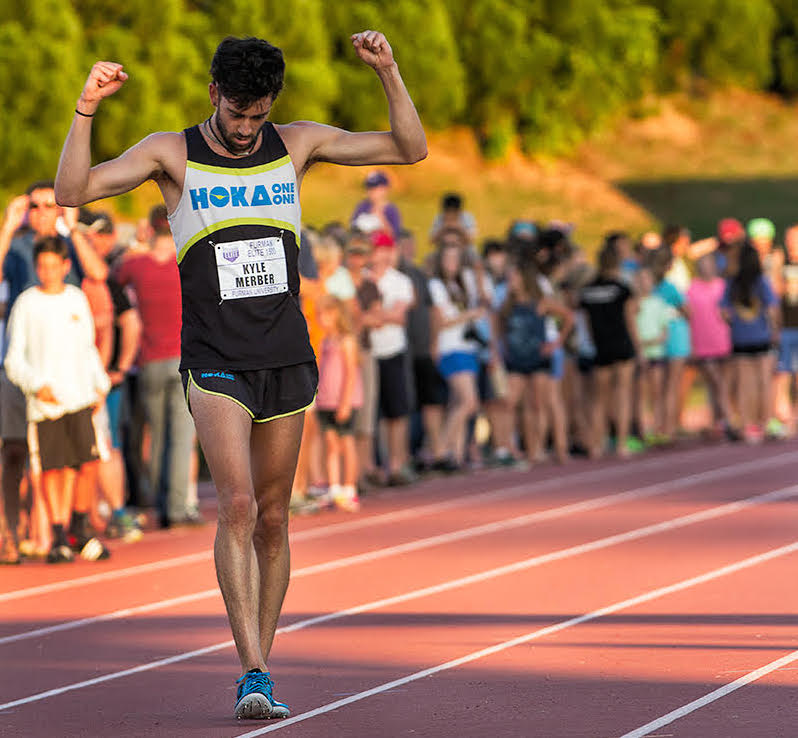 Three years ago, on a rain-soaked track in rural Pennsylvania, I ran the fastest 1,500-meter race by an American college student in history. My time was 3:35.59. Add an extra 109 meters to that pace, and it’s a 3:52 mile. I didn’t realize just how quick it was until someone put it in that perspective for me.

I hadn’t expected to run anywhere near that. My best 1,500 time going into the race was 3:42—still a very respectable time by collegiate standards, but far from record- breaking. As one of the athletes who had to beg his way for a spot on the starting line—it was a late-season race, held specifically for some of the country’s top runners to lock down good times—I was just there to play follow the leader, and hopefully get carried along to a personal best, maybe even a qualifying time for that year’s Olympic trials. Instead, I won.

I can recall key parts of the race, but much of it is a blur. The last of the evening’s raindrops splashed against the track as the athletes peeled off their warm-ups. A surprising number of fans lined the track’s perimeter. After the starter fired his pistol, I fell into position toward the back of the 15-person field and focused only on the damp jerseys in front of me. I knew fatigue was due to set in soon, but once we passed the halfway point, instead of losing ground, I began to move through the field. Soon the leaders were in sight. There was life still in my legs around the final turn (how did we get here so soon)? With my eyes forward and my head up, I made my bid for the front.

Engulfed by the moment, I crossed the finish line oblivious to what I had just achieved. My legs were numb. I turned around to see who came in behind me. Then one runner a few strides back yelled to me in disbelief. He must’ve seen the clock. My coaches sprinted toward me with their hands in the air shouting just how fast I had gone.

Euphoria always follows a great race—a validation of all the work and sacrifices leading up to that moment. But this performance was different. It was difficult to understand what had happened. On paper, I was seven seconds faster than I had been when I woke up that morning, a difference that takes most competitive runners years of chipping away to achieve. Suddenly, I was part of an entirely different tier of athlete. Now I had to convince myself I belonged.

Three weeks after setting the record, I had the most devastating race of my career. At the NCAA National Championships, I bombed out of the preliminary rounds of the 1,500 meters, not even making the final. With the echo of the stadium’s crowd still audible through a tunnel and my breath still heavy, I had to compose myself before facing the media. What had happened? I was supposed to be among the best now—people wanted great things. How does the American collegiate record holder run so slow?

I’d had one goal going into those championships: to win. But entering a race with a win-or-lose attitude is a dangerous approach. With new personal records come new expectations, and after I failed to live up to mine, I quickly became haunted by doubts and disillusionment. Would that lightning ever strike twice?

The ecstasy of just a few weeks earlier began to feel like a dream.

It took me three years to run as fast as 3:35 again. After graduating from college, injuries, missed chances, and bad luck plagued each season. Eventually, I had to go back to the basics. Keep it simple. Stop the overthinking. Staying healthy became my first priority; putting one foot in front of the other the second. There was no curse to be lifted, I told myself. That quiet track in the backwoods of Pennsylvania was the same distance around as every other. I just needed the right opportunity.

It finally came last May, when I found myself just off the leader’s shoulder in the final stretch of a 1,500 in South Carolina. The race’s pacers had been hasty, and the field was competitive. Now was my time. The impulse to win overrode the pain of each step, and once again, I felt those chills shooting through my spine, masking the temptation to let up. The numbers on the big clock by the finish were lower than I had ever seen. I leaned my head forward to cut a few hundredths of a second as I crossed the line. Occasions like this are rare, and I wanted it all.

In track, as in all other sports, failure is determined by the level of success you achieve—where you set the bar for yourself, based on past accomplishments. If I hadn’t run that one extraordinary time in college, I’d have been thrilled just to be at nationals that year. But once I proved what I was capable of, I had to try to live up to it.

In this way, paradoxically, a runner’s victories are forbidding as well as euphoric. Success means new goals to obsess over and fall short of.

Last May, with the ghost of my college-self behind me, it didn’t take me long to forget my recent years of frustration. Finally, I’m able to look ahead—specifically, to next year’s Olympics. But I’m already starting to sense once again the creeping demons of my own ambitions. How do I suppress them? So far, the only trick I’ve found is to embrace the disappointment—to recall the crushing moments, and to use them as fuel to never feel that way again.

Then: keep it simple. Take the next step.