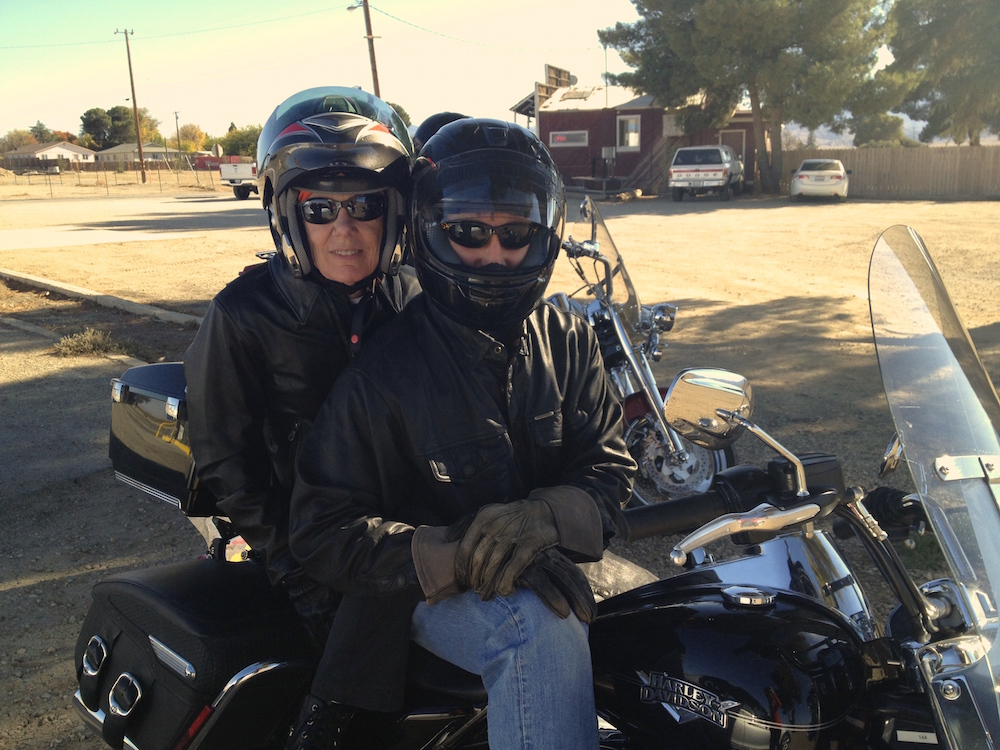 I’m a 77-year-old Biker Babe—that would be me. And my Biker Boy is no boy— he’s pressing 60 although he doesn’t look it. When I first started riding Harleys about 10 years ago, my children and grandchildren shrugged and said: “Well, that’s it. She’s finally gone crazy.”

So what possessed me? I’m mild-mannered, wear Anne Klein’s designs, and actually read the Los Angeles Times every day.

Here’s how it began. As a member of Governor Arnold Schwarzenegger’s staff, I gave a speech on the state budget at a downtown Los Angeles club. Afterwards, up came a guy named Mike to ask if the governor still rode his motorcycle and to invite me on a ride with his group of friends. My response was: Not sure about the governor and no!

But he persisted and soon I got on my first Harley-Davidson—behind Mike—with a borrowed helmet and hand-me down duds to go to Santa Barbara for the day. My legs were shaking and eyes fixated on the speedometer. I wondered if I had truly lost my mind—even though it turned out to be a sparkling day at the beach. The residuals of that first ride? Frayed nerves and helmet hair. Not an auspicious beginning.

But it wasn’t my last time. Adventure beckoned. It wasn’t long before I was riding with Mike, wearing a smile on my face and full-on leathers, the best brand of helmets, and Harley glitter shirts.

I am the only woman who travels regularly with the group—a core of 10 longtime friends. We bring wine and luggage and are grateful when friends and spouses, including Mike’s wife, occasionally accompany us by car. Otherwise, it’s just a few changes of clothes for me. Our group includes CEOs, attorneys, insurance brokers, and the like. Mike is a senior vice president at a major brokerage house. Among the group, there are some tattoos—including a full upper body’s work of art—but not many. No Hells Angels here.

I’ve learned that motorcycle culture has its own unique traditions. One is determining nicknames for everyone. It’s a group decision, but be wary. If you say you actually like the new name you’ve been given, you’ve blown it. Forget it. No nickname for you. Usually assigned nicknames reflect something about the person or his habits. Psychologists, take note. Say hello to Buzzard, Stink Bug, Buckle Boy, Three Gallon, Answer Man, and Splinter, among others. Mine? The First Lady—with the upmost respect given to Michelle Obama.

Riding is one of my greatest pleasures. It’s given me 10 brothers who look out for me, and I love them. Each ride provides a new adventure. The focus is on the moment, with daily distractions set aside. Mike and I are not “wired” for sound because talking to each other or blasting music gets in the way of what we are seeing and feeling. I just hit him on the back when need be, to point out a young deer on the side of the road or a particularly beautiful waterfall.

On the road, there is nothing like feeling the wind streaming across your body and the thrill of approaching a hairpin curve. I’ve never been scared, as Mike is one of the best on the road. However, the risks heighten the experience. Yes, we do lane split, but with intense concentration. And, I will not forget a Death Valley trip when Mike said, “Hold on.” That was the first time I experienced traveling well over 100 mph. I feel pretty cool for a great-grandmother.

Harleys are people magnets. Whenever we pull up to a gas station to refuel or go into a café, someone invariably comes over to ask where we are headed and recount an experience of being on the road. Stories and laughter abound. At one motel we stayed in, a staff member was fascinated with our group. Before waving us off in the morning, she turned to me and whispered, “You are one badass.” I had to verify with my grandchildren that this was a major compliment. 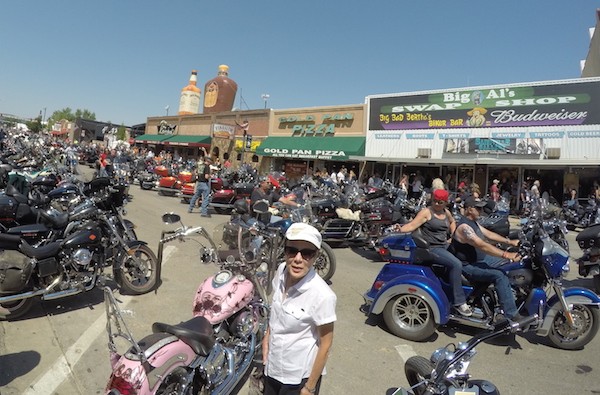 We’ve taken many trips through beautiful areas, staying in historic hotels and motels, where we frequently get odd looks. And we always seek out fantastic Italian restaurants along the way. Surprisingly, motorcycling can be good for your wardrobe. We rode through Madrid, a small community not far from Santa Fe, New Mexico. It’s a former ghost town, full of artists, hippies, bikers, and other counterculture types. And, what did I find there? A dress that cost next to nothing, which I wore two months later as I walked the Emmys’ red carpet. No more expensive designers for me.

The coup de grâce for me was our trip this summer to Sturgis, a small town in the Badlands of South Dakota, for the 75th annual Harley-Davidson rally. The guys had been before, but it was the first time for me. Some of us decided to take a leisurely route, heading up Route 1 along the California coast and then hugging the ocean through Oregon and Washington and entering Canada through Vancouver. Then east through Canada dropping down to the Dakotas, traveling 3,300 miles in 10 days. (Don’t worry about my backside. Mike and I ride a big Harley touring bike. For me, it’s just like sitting on a couch.)

The Sturgis experience was almost indescribable. There we were, along with 739,000 other bikers, to celebrate motorcycling. The noise was unbelievable. Spirits ran high. We couldn’t get enough of people watching. Lots of letting it “all hang out” in the crowd—including American flag pasties on breasts of all sizes. There were bars, bars, and more bars—some large enough to accommodate bikers riding in on their motorcycles. Live entertainment, soundstages, and several million t-shirts coming off the shelves. Many races and Evel Knievel-like competitions to savor.

I was asked once if I felt safe while in Sturgis. My answer was a strong yes. Good planning by the rally organizers carried the day. Bikers were respectful, as were the police, who were present in large numbers. DUIs were down this year, and no major incidents occurred. However, there were 13 fatal accidents in the Black Hills area related to the rally that saddened all of us.

What’s next? More trips. Adventure. Fun. I can’t wait to experience the magic of the open road again—and to tell my new great-grandson that yes, your great-grandmother is definitely one badass.