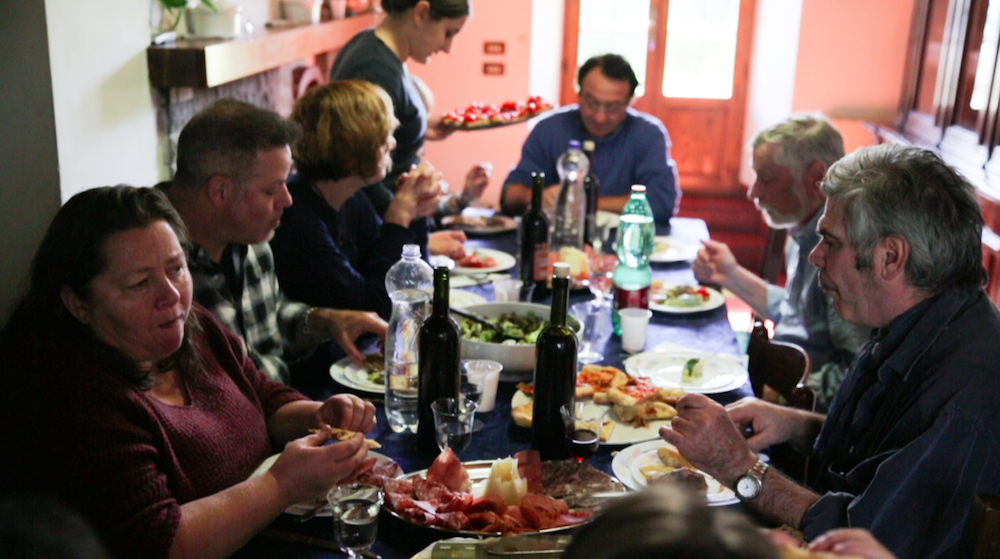 As a so-called “international gypsy,” a child raised by journalist parents around the globe (mostly the Mediterranean), I suppose it’s natural for me to be drawn to food. I have cooked professionally in many parts of the world, and eventually opened my own restaurant in New York City. But for me the turning point came in 1971 when my parents bought a tumble-down farmhouse in a small town in Tuscany. The villagers still lived as they had for centuries, raising what they needed to live on and bartering for anything they didn’t produce. That was when I become aware of food as something to be celebrated and cherished—and even occasionally indulged in with utter abandon.

As I write this, I’m still full. I just returned from my neighbors’ house and a long, extravagant Sunday lunch. We feasted to celebrate my successful olive harvest. First we fired up their 300-year-old wood oven and cooked some quick flatbreads. Then, as the oven cooled, we piled in traditional dishes like lasagna, roasted farm chickens and rabbits, and potatoes soaked in salt water and coated with olive oil and aromatic herbs from the garden. We sat at a table laid for 15 people and covered with bottles of wine, baskets of bread, and trays of crostini and house-cured salumi. We struggled mightily not to overeat, knowing all the delicious courses that were to follow.

My neighbors and I have not enjoyed a meal this gluttonous together for many years. Harvest traditions have fallen by the wayside as even this remote hamlet moves into the 21st century. These are the traditions I discovered when I first met my neighbors, the Antolinis, in the early 1970s. It was early June, I was 8 years old, and it seemed like we had extravagant meals every day at a long table under a grape arbor. My family had arrived for the summer just as the wheat harvest was getting underway, and we were quickly invited over to participate in the trebbiatura, or threshing of the wheat—no doubt because it was just assumed that every able-bodied adult in the community would join in the day’s labor during the time of the harvest.

But at the end of the summer, I learned that the feasting was an exception, a necessary reward for the hard work of threshing wheat on a June day under a relentless hot sun.

Back then, my neighbors seemed to straddle the 19th and the 20th centuries. The old sharecropping system called mezzadria was finally dying off (the Italian government ended it in 1964). My neighbors owned their property; the patriarch Agostino bought it with his World War I mustering-out pay. But many people in the village were still tenant farmers who did all the work on the farm and paid half their agricultural production to the landowner. This system had been in use since the Middle Ages in Italy and across Europe.

When my family arrived, we didn’t understand what profound changes, good and bad, the demise of mezzadria would have on the lifestyles of our neighbors. They went from living without electricity or indoor plumbing—as basically slaves to the land, whether they owned the property or not—to owning cars, watching TV, and growing cash crops like tobacco to pay for it all.

The Antolinis had three children—the youngest of whom, Arnaldo, was 17 when we first met them. He was the first child to complete high school and remembered a childhood of abject poverty and struggle. Gluttonous feasting was rare, privation the norm—even in the ’70s. Though the Antolinis owned their property and thus didn’t have to split their crops with anyone, they still survived off their land and what they raised on it. Perhaps because they lived so frugally most of the time, feast days were celebrated without restraint. We ate more food on a harvest day in a single meal then we ever consumed otherwise. There was wine and, eventually, music and dance. All of this was shared freely and with joy, as though entering fully into the experience cancelled out all the sober times.

In retrospect, these meals and the many other feasts I have shared over 40 years with my neighbors and “adopted” Italian family—from Christmas parties to the marriage of their son, Arnaldo—were quite gluttonous. I usually end one of these meals with a half hour spent walking it off, just to begin to feel normal and not stuffed to bursting. 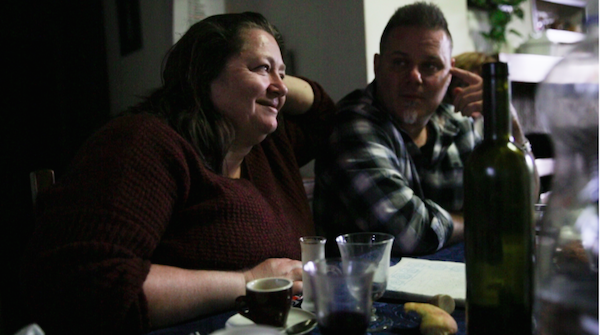 Gluttony is about excess, taking more than what one needs or can comfortably consume. Yet excess of any sort can be intoxicatingly pleasurable. As a sensualist who absolutely believes in pleasure for its own sake, I don’t consider it wrong to enjoy gorging on a fine Sunday afternoon after the harvest has been reaped and stored. I don’t think it’s immoral to be seated amongst friends and family, enjoying the warm embrace of affection and contentment and sharing well-loved foods and wine, guzzling after-dinner digestifs as an accordion player accompanies a friend’s spontaneous song.

Gluttony has its place in a balanced life. Indeed gluttony can be part of the joy and pleasure of life. After all, it’s really just enjoying to excess—and why is that wrong? Is it wrong to enjoy the sweet perfume of a summer’s day on a fresh-cut lawn or field? Must we deny ourselves an apex of joy, since we have no ability to control the nadir of misery? Isn’t the occasional indulgence in anything—including food—to be respected and enjoyed as part of living?

To me, the idea of self-induced sober deprivation is a sour vestige of puritanical thinking, a remnant of a time when people were expected to suffer the miseries of human existence by consoling themselves with the promise of a hereafter filled with glorious pleasure. We shouldn’t deny ourselves the pleasures of the table in this life. We also probably shouldn’t have gluttonous meals like the one I just enjoyed every day. But we can relish them on occasion and enjoy a feast like that for what it is—a sensual pleasure followed through to the extreme.