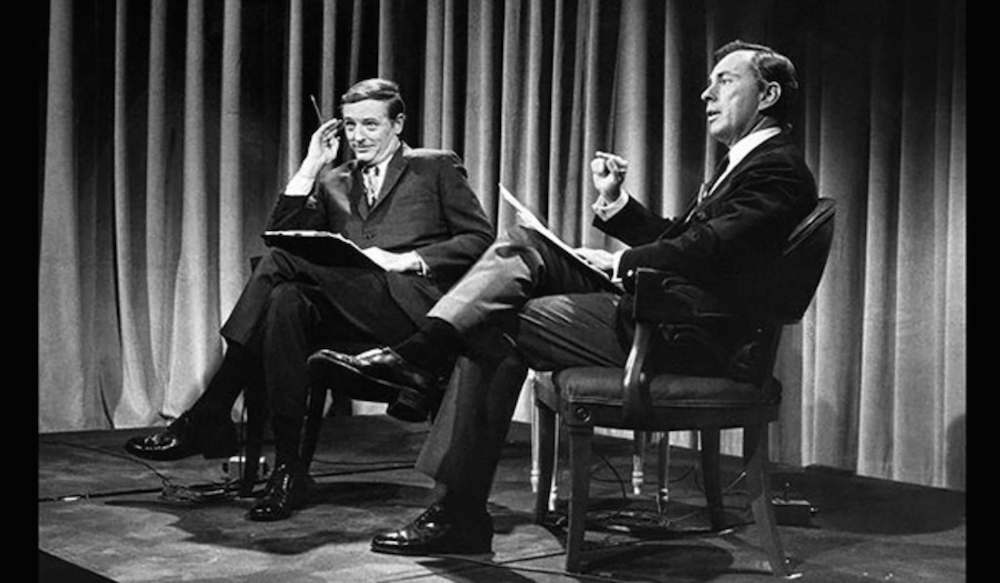 In our defense, we were a bit desperate. It was 1968 and ABC News was starved for resources and significantly smaller than its rivals NBC and CBS. We had to do something, anything, to get noticed. I should know: I was ABC News’ director of public relations.

As the presidential nominating conventions loomed that year (Miami Beach for Republicans, Chicago for Democrats) ABC News executives came up with the novel idea of a nightly 90-minute highlight show instead of providing the standard—and endless—gavel-to-gavel coverage. To make this new show even more compelling, the news division hired two of the most articulate and telegenic observers of the political scene—the conservative William F. Buckley, Jr., and the liberal Gore Vidal. TV and politics have never been the same.

Buckley and Vidal were leading public intellectuals of a type our society rarely produces anymore. Buckley, who oozed intellectual elitism and good-humored disdain for lesser minds, was the author of multiple philosophical books about government, the founder of The National Review and a quixotic candidate for mayor of New York on the Conservative Party ticket. Asked what he would do if he won the race, Buckley said, “Demand a recount.” No recount was necessary, he lost to liberal Republican congressman John V. Lindsay.

Vidal, for his part, was a liberal icon of equal gravitas. Author of 28 nonfiction books, eight plays, 31 novels (many of them mega bestsellers), and 15 screenplays. In nonfiction books and essays, he advocated for sexual freedom and claimed any sexual linking of any combination of genders in any circumstances was okay as long as no one was hurt. Biographies and tell-alls later portrayed Vidal as being occasionally bisexual but mostly gay. In contrast, Buckley—a devout Roman Catholic—was an unbending moralist.

Buckley and Vidal were formidable substantive thinkers, but they engaged in TV combat with extremist, often tasteless, mud-slinging gusto. On the penultimate night of the Democratic convention, a nadir for civility, Vidal called Buckley a “crypto-Nazi” and Buckley responded by calling Vidal a “queer” and threatening to “sock you in your goddamn nose.” The next and last night of coverage, ABC News’ producers separated them by a curtain, even though they sat on the same stage.

Let’s be clear: Politicians engaged in intemperate, hyper-partisan histrionics and demagoguery long before the arrival of TV. In fact, in earlier, more innocent times, TV played a moderating influence on the tenor of political discourse. Sen. Joe McCarthy’s anti-communist showmanship, for instance, was not created by TV; on the contrary, television, and especially the courageous coverage by Edward R. Murrow, ultimately diffused his toxic shenanigans and helped lead to his ruination.

Regrettably, an unintended consequence of the Buckley-Vidal skirmishes in 1968 was a fundamental reversal of TV’s influence on politics. Television went from being a moderating, elevating force to being an agitator for less civility and more cynical showmanship. Of course, the times were changing, the nation’s streets were filled with protests, and many people—particularly the young—distrusted politics and politicians. So civility was bound to erode, but television energetically joined the bandwagon of forces pushing for a more “lively,” contentious politics.

All of this was driven home for me by the critically-acclaimed documentary Best of Enemies, which looks back at the Buckley-Vidal confrontations that so shook the media world.

At the time I—like most of my colleagues—wasn’t thinking of the long-term impact of what we were doing, I was just trying to promote it then and there. My job was to get as much publicity for the broadcasts as possible, and the best way to do that was to trot out Buckley and Vidal for press interviews. Buckley refused to do any of them. Vidal, however, was promoting the newly-issued paperback version of his bestseller, Myra Breckinridge, and was agreeable to any media request at any time in any venue. (He joked that he would do phone interviews from his hotel room shower if need be.)

At the first convention, where Richard Nixon’s nomination was a foregone conclusion, Buckley just showed up, having done no research. He was going to coast on his wit and brilliance. Vidal came loaded for bear: He had hired a researcher who had delved deeply into Buckley’s magazine, The National Review, finding errors, inaccuracies, and extreme positions. It didn’t matter. Vidal would throw out something outrageous Buckley had written and Buckley would deny he had written it and Vidal would say, “I have it right here,” and Buckley would insist that Vidal was making it up. It was clear to all there was no fact-checking in a live and lively exchange.

Buckley frequently counterattacked by calling Vidal a pornographer and labeling Myra Breckenridge as a pornographic novel. Although Buckley had not read Myra, the book had gotten so much publicity he knew its main character underwent a sex change—twice—and that it contained almost every kind of sex act—performed by every conceivable combination of genders—one could imagine. The book challenged every one of Buckley’s assumptions about gender and sexuality.

Every time Buckley had a moralistic outburst about the book, Vidal smiled slyly because he believed Buckley was selling thousands of books for him. For his part, Vidal refused to return the favor, never naming The National Review and instead referring to it as “that publication whose name shall never pass my lips.” By the time the second convention convened—in Chicago—Buckley had done scads of research, but the scene outside the convention hall quickly devolved into a combat zone with police tear-gassing and clubbing protestors and anti-war demonstrators raising Viet Cong flags. The riot outside dictated the discussions in the studio and any planned ambushes by the participants went by the wayside.

The 90-minute wrap-ups, and especially the Buckley-Vidal confrontations, were a huge hit. In fact, no broadcast network ever again did gavel-to-gavel coverage of a political convention. The two key takeaways from Buckley-Vidal for the next generation of TV news producers: Audiences respond more to heat than to light and “facts” on TV are what you say they are and need not be, well, factual.

A little more than a month after the conventions, CBS News debuted 60 Minutes. Within 18 months, that program was spiced up with its “Point/Counterpoint” feature, a contentious debate between the liberal commentator Nicholas von Hoffman and conservative commentator James J. Kilpatrick. In short order, Shana Alexander, a noted columnist who was both a liberal and a feminist, replaced the lower-key von Hoffman. (The cast change supplied grist for Saturday Night Live’s parody starring Dan Aykroyd and Jane Curtin. The Alexander-Kirkpatrick discussions were as contentious—although not as funny—as the parodies.) The show resurrected Point/Counterpoint in 2003 with former President Bill Clinton and former Sen. Bob Dole, but the effort was abandoned in short order, perhaps because Clinton and Dole treated each other with respect and their subject matter with rational discussion.

Volatile confrontation would become the norm on TV. Years later, in the 1970s, as a producer and then executive producer of Good Morning America, I oversaw dozens of red-faced, left-right smackdowns about everything from politics to vaccinations, from unions to the Middle East, in our daily six-minute “Faceoff” feature. The McLaughlin Group debuted in 1982, followed by imitators on both the national and local level, just in time to set the tone for cable TV’s political commentary. CNN’s Crossfire was the 1990s epitome of the genre, though it soon felt quaintly dated since it was a half-hour of combat at a time when newer entrants into the cable space—Fox News and MSNBC—were filling the whole day with confrontational political shouting matches.

It was uncivil, fact-free argument all day and night. As comedian Jon Stewart—in a moment of seriousness—told the anchors of Crossfire not long before it was cancelled, this kind of coverage “hurts America.” That may be, but politicians have learned that TV rewards sensationalism and sizzle over judiciousness and substance (and not just in this campaign cycle).

Buckley and Vidal, two towering intellectuals (at least when they weren’t on TV), would have been appalled to be accused of cheapening public discourse as a result of their infamous 1968 confrontations. If they were alive today, I suspect the “pornographer” and the “crypto-Nazi” would agree on one point: How dare you blame us? This isn’t what we intended.