When I moved from big-city California to small-town Mississippi earlier this year, one thing I did to participate in my community was sign up as an election worker. It was a way to make some pocket money, though $115 for a 14-hour day was hardly the major draw.

Voting in my precinct took place in the fellowship hall of a rural Baptist church. Judging by the great piles of folding tables and chairs lining one long side of the pine-paneled space, some 200 souls could comfortably gather for a meal in the place where 486 people came the other week to participate in their representative democracy.

I had worked a primary and a runoff in the summer, but the general election on November 3 was the busiest day in my short tenure. I reported for work a bit before 6 and business was brisk from the stroke of 7 o’clock. There were occasional rushes, such as around the shift change at the chicken-processing plant down the road. It was satisfying to play a supporting role in keeping the process fair and as trouble-free as possible. No one had to wait more than about five minutes to vote while I was manning the machines.

I loved watching people take their kids around the machines with them, just as my folks did when I was little. We don’t use booths with curtains in my county, but the video screen adds to the allure for today’s youth.

“Mama, let me push the button!”
“Mama has to do it, but you can watch.”
Parents would whisper conspiratorially.
“See this one? We don’t like him. We like…”—beep—” … this one.”
Beep, beep, beep.

There are several jobs at a poll. In the primary, I had manned the check-in desk, comparing people’s IDs to their names in the registration book. Mississippi’s voter ID requirements are among the strictest in the nation, and a few would-be voters arrived unequipped. Their only choices were to go home and fetch their ID or complete a provisional paper ballot that would only be counted if the voter appeared at the courthouse with ID within five days. It hurt not to allow eager citizens to vote then and there, but the law is the law.

For the general election in November, my assignment was the Diebold machines, which had been delivered to the church and set up overnight. After voters showed their IDs and signed the register, I directed them to one of four machines. To activate a machine you must insert a plastic card, just as you would when paying at a grocery store checkout. The card must first have been encoded by me, using a little device that hung from a lanyard around my neck. Arrive, present ID, sign in, take a card, insert card, read the screen, vote.

We were glad to be busy; the veteran election workers described runoffs involving only a minor race or two in which the turnout was measured in dozens. The large kitchen at one end of the fellowship hall made it easy to imagine the countless squash casseroles and pots of chicken and dumplings that had been reheated in it over the years, but most of us subsisted on cold sandwiches and potato chips on Election Day. One kind woman brought blueberry muffins. The continuous flow of humanity left little time for conversation, but most people appreciated our help in making it easy to vote. Even the woman whom I asked to remove a campaign button took it in stride.

By mid-afternoon, we were downright gleeful. “We’re going to hit 60 percent!” And when the bailiff locked the doors at 7 p.m., 62 percent of the precinct’s registered voters had taken time from their day to express their opinions at the Diebold electronic voting machine. Our election, in a county whose entire population is smaller than many San Diego suburbs, demonstrated a remarkable level of interest and engagement. I wish elections had been so engaging back in Los Angeles. 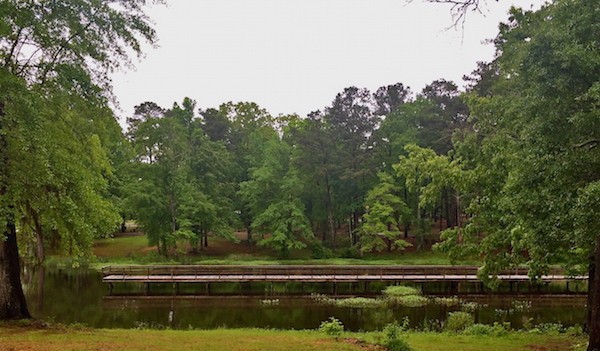 As soon as voting ended, the six or seven of us commenced a long checklist of wrap-up tasks. From each of the machines, a report was printed showing vote tallies in every race. These reports, resembling fast food receipts and measuring 5 or 6 feet apiece, were then taped to the wall, where anyone who wanted to inspect them had the right. Indeed, several representatives of candidates or campaigns waited to look at numbers. Duplicate printouts were gathered, along with provisional ballots and curbside ballots—which came from voters with mobility challenges who voted from their cars, in the presence of two poll workers—then all the ballots were sealed in a canvas box. Just as every slip of paper was checked as it came out of the box in the morning, everything was accounted for when it went back. Finally, the ballot box was sealed with a numbered wire clasp, and the poll manager drove it to the county courthouse. My work was done by 8 p.m.

For all the delight in the poll over our impressive turnout, something gnawed at me: the fact that four out of 10 people in my precinct didn’t vote. And that’s just among the registered voters. When you consider the entire population that is eligible to vote, turnout numbers drop considerably. In America, voter participation ranks near the bottom among developed democracies.

For a period of about seven years, I worked in California state government, in a job that required me to travel from my home in Los Angeles to Sacramento for several days each week. I became acquainted with the speaker of the state assembly, in whose central-L.A. district I lived. He always treated me with courtesy, though I often wondered if that was just because I was the only person in the Capitol—400 miles from Los Angeles—who actually had the power to vote for him.

This man was arguably the most powerful Democrat in the nation’s most populous state, yet he had won his seat with fewer than 45,000 votes, in a district with a population of almost a half million. In fact, fewer people had voted in his district than in any of the state’s 80 assembly districts. I would ask if the situation didn’t seem strange to him. He could only shrug.

Why don’t more Americans vote? Some people don’t think their single vote matters, while others simply don’t know how the process works: where to register, where and when to go, primary vs. general elections, etc. People might read about electoral fraud and assume the entire process stinks.

And sometimes the ballot itself confuses. In Mississippi, we experienced that phenomenon this month, via a pair of ballot measures in the general election.

When two measures are on the same topic, Mississippi requires two different votes—one in which you consider the two measures together, and another where you choose between the two of them. The thinking is that you get more choices; even voters who want neither initiative get to decide which measure is the lesser of two evils, in case they pass.

But this is confusing in practice. When voters looked at their ballots, what they saw, after a brief summary of the measures, was this:

Dozens of people motioned me over to their machines and asked me to explain. I was limited in what I could say—certainly nothing that could be taken as advocacy of one side or another—but I tried to help them navigate the language. Voters of apparent higher-than-average intelligence scowled and remarked on the complication of the thing. “This is so confusing!” they’d complain.

Many said they would just skip the second question, rather than risk voting the wrong way. In the end, almost a quarter of the people statewide who registered a vote on the first question skipped the second question, despite the ballot’s use of the phrase “and vote for one” (of the initiatives). I see this as evidence of the widespread confusion.

By the way, both initiatives went down, the people having answered “no” to the first question. Was the issue purposely convoluted in order to achieve a specific outcome? One legislator acknowledged precisely as much, as reported by the Jackson Clarion-Ledger: “’Is 42A intended to make it more difficult to pass initiative 42? Of course it is,’ said [state representative Greg] Snowden, a Republican from Meridian.” And we wonder why people are sufficiently discouraged about voting to stay home on Election Day.

It would be a satisfying bonus to my part-time work if I were able to do more than just hand voters their little cards to slide into the voting machine, and help them, one at a time, navigate their ballot. But my reach is not very far. Ironically, while I am on the front lines of democracy with my work at the polls, I am prohibited from campaigning for any candidate or issue. I may not even put a yard sign in front of my house. Still, I will continue to work the polls and do my little part in helping people participate and stay engaged with their government. I’ll also cash the $115 checks and figure that the county got me at a bargain.