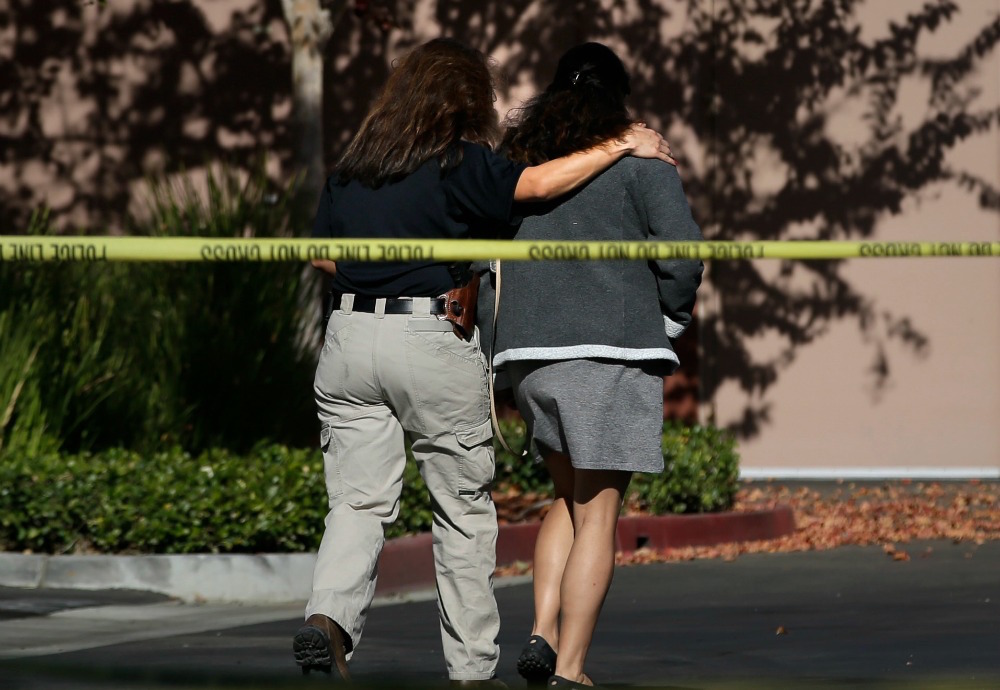 There was no hashtag or meme or Facebook artwork on August 1, 2012, when San Bernardino, California, filed for bankruptcy after a long fiscal breakdown. Massive budget cuts followed. The police force was reduced by a quarter and murders predictably went up. City Attorney James Penman later told residents at a public meeting to “lock your doors and load your guns.”

Such talk wasn’t new. San Bernardino, where I grew up, was already famous for violent crime and drug-dealing and shootings that came in three categories: gang-related, drug-related, or police-related. Sirens were as commonplace as barking dogs and mailboxes. There was no hashtag or meme or shareable Facebook post to rally behind.

So when I heard the phrase “there was a shooting in San Bernardino” on December 2, my initial thought was: “What’s new?”

The violence is why people leave. I moved from San Bernardino to neighboring Redlands hoping to escape. And so I wound up living about 75 yards away, and nine doors down, from the townhome rented by Syed Rizwan Farook and Tashfeen Malik. I walked my dogs by the place, but don’t remember ever seeing them. On the day of the shooting, I stayed inside and listened to my hometown next door become a worldwide talking point for the first time in my life.

My childhood friends and I, all living elsewhere now, texted each other. We shook our heads at the misspelled #SanBernadinoShooting (the second “r” in Bernardino had disappeared, but perhaps that is the reality of the social media attention span). We noted the irony that such a hashtag could have described most days in the city, only now the world was no longer indifferent.

Within hours, MRAPs—military-grade mine-resistant vehicles—were circling my neighborhood. Helicopters were overhead. I am used to these vehicles and noises and sirens. San Bernardino had come back to me. By night I was locked down, and by Thursday morning the area was a federal investigation site.

Two days after the massacre, I walked outside and found that the police tape had been taken down. News production trucks filled the empty spaces where law enforcement mobile command centers had been parked. I could move freely, so I chose to go see my neighbor’s house in person, without a pundit or newscaster guiding me.

I stood at the edge of the press pit and watched landlord Doyle Miller peel back plywood on the home he rented to Farook and Malik. Watching news crews crawl through the shooter’s realm was a perfect crystallization of how fast the media eye flickers. This was a “better story” than the office party carnage—here were a driver’s license and baby toys and prayer mats and ammunition.

Many times last week, I was asked by reporters “what I would do now” and how I felt about Farook and Malik “living in my neighborhood.” The problem is this type of question is a better fit in tight-knit communities—and that doesn’t describe the one I co-habited in with Farook and Malik.

Growing up in San Bernardino, you live in a radius of violence, so you come to expect horror being within walking distance.

I live amidst all kinds of people here from all kinds of places. Some of these people are older. They have lived here for 20 and more years. They are usually Caucasian and have lawn signs for Republican candidates. They were the ones reporters most often sought out. They are the American, home-owning neighbors, drawn into this “I can’t believe they were right there, in our neighborhood” narrative. This is easy journalistic fodder because a discourse of fear makes for prime viewership. Being scared is a relatable emotion. But when I heard some of my neighbors express that outlook on camera, it pained me.

Outside of the older demographic, there are a few young families. I am good friends with a Tunisian family a few doors down. A single father lives across the street from me; we have different views on politics, but we get along because we’re both young. That is more or less my social circle. Generally, I don’t know most of my neighbors because they are ever-changing.

There always seems to be a new family coming or going. This is usually job-related. We live within walking distance of the headquarters of ESRI—the largest global mapping company. ESRI has an international workforce, and they often bring in employees on H-1B visas. These employees and their families will rent a home close to the campus, work for a time, and eventually leave.

In “small-town America,” the new Muslim family on the block might cause a stir. But in my neighborhood, that is not the case. Passing ESRI employees as they walk to or from campus is common. Many are of South Asian or North African descent. Seeing men and women in traditional garb is not new or different. This is why Farook and Malik fit in.

The Thursday immediately following the shooting and the home search, I was interviewed by a Los Angeles news station. “How does that make you feel?” the news anchor asked me, “that they were right there. That they had bombs.” My answer to the news anchor was along the lines of, “That’s the world we live in, I guess.” I saw a clear disappointment in the man’s face. While I know his job is to report and perpetuate a version of the news, one that makes people shudder in fear, I couldn’t give the reaction he wanted.

In the recent years, after a mass shooting, the narrative always falls back to the neighbors giving witness to the perpetrator. We tend to trade the conversation about assault rifles and increasing violence for first-person accounts on how the shooters were perceived.

I did feel disturbed when it was revealed that Farook and Malik had concocted nebulous plans involving schools in San Bernardino. My mother was a principal in San Bernardino for a number of years, and they had looked at her school and others. I do indeed fear the terrorist next door, but there were all kinds of terrors in San Bernardino, and odds are that a terrorist is more likely to look like me (a guy with fair skin and brown hair) than like Farook or Malik.

So, was I shocked that a terrorist lived in my neighborhood? Not really. Growing up in San Bernardino, you live in a radius of violence, so you come to expect horror being within walking distance.

For a too-brief moment, my hometown—finally—was the focal point of intersecting conversations about gun control and violent crimes. And then, quickly, the 2015 San Bernardino story veered toward terrorism. That’s understandable, but heartbreaking. San Bernardino’s other problems are put on mute. The terrorism story will come and go, but the concerns with violence and bankruptcy and poverty were here before and will remain on our minds.

I look at the hashtags about San Bernardino. There is the picture with a heart within a California silhouette. It doesn’t take more than a few seconds to share the image on Facebook or Twitter. But the city, and the victims of the shooting, deserve much more than just digital sympathy.

What will become of San Bernardino when the national conversation turns elsewhere? Won’t things go back to the violent normal? I ask myself where the calls for prayer, the memes, and assertive Facebook posts were prior to the Inland Regional Center shooting, the darkest moment of a tragedy that has been going on for a long time, in slow motion.