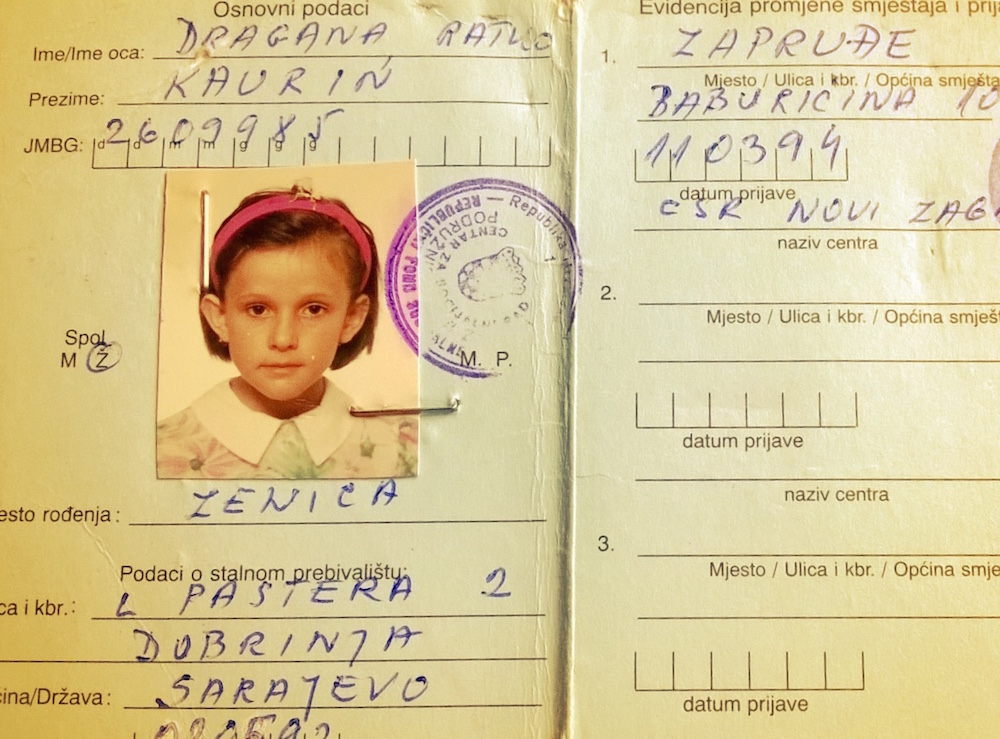 I recognized Basel immediately when the shot cut to a group of refugees standing in the rain, and he turned to look briefly at the camera. I was at home a couple of months back watching a Sky News report showing Syrian refugees wading through muddy water and being pushed by Croatian border police, an embarrassing image of Europe’s refugee policy. It was chilling to recognize a person in such a tragic scene.

Basel had owned a bakery in the heart of Old Damascus, and he rarely charged me for my morning maamouls in another life, when I was an Arabic student in Syria. We’d chat through my very limited vocabulary while I waited for orange juice from the next stall. Now here he was on Sky News, standing in mud in what was once my country.

In Bosnia, we’ve been reliving our nightmare watching the Syrian war unfold. We’ve noted many similarities: mass displacement, loss, U.N. shortcomings, a recalcitrance to take refugees, a Russia-backed tyrant, a quiet international community. For me, following the recent crisis has been profoundly personal. Not only because I found a second home living in Damascus, but because what’s happening to the Syrian refugees is so disturbingly familiar.

We recently observed the 20th anniversary of the Dayton Accords. The agreement may have ended the Bosnian War, but it left us in a political limbo. Bosnia inherited a messy power-sharing agreement that institutionalized ethnic divisions and a countryside sown with signs reading, “Warning! Mines!” It is all a relentless reminder of our past, and a foreshadowing of Syria’s future.

In early spring of 1992, war crept quickly into our delightfully ordinary lives in Sarajevo. I first noticed that fewer and fewer of my classmates were coming to school. One day the teacher separated the few of us left by ethnicity: Bosniak and Croat kids were shoved to the back, and Serbs were to sit up front. Being of split parentage, I didn’t know where to sit. That was the last day I went to school. The shootings came closer every night in our suburban neighborhood, and we started sleeping in the bathroom, away from the windows. One shooting even happened in our building. It took days to wash all the blood off the walls and stairwell.

I remember some months into the violence when a parade of pristine white vehicles with their blue-helmeted passengers drove into Sarajevo. They honked, and we cheered in relief. My father knelt down so he was at my eye level, and pointed at them. “Look, Dragana,” he said to me, “That’s the United Nations. They’re here to stop the shootings. We’re safe now.”

On a particularly warm spring day, soon after the U.N. convoy arrived, I snuck out onto our balcony to play with my neighbor Zinka. I don’t know which she heard first, the shots or the glass shattering behind us, but she screamed “Sniper!” and sprinted across the long balcony back into the apartment. Instead of following, I froze. Even as everyone inside shouted at me to get up and run into the house, I couldn’t move. I was petrified. My father finally ran out and grabbed me.

Once we were inside, he shook me and yelled at me for going out. Others reasoned with him that I was in shock, and so was he. When you’re living under siege, it’s easy to forget that war is abnormal. People dying in barrel bomb attacks, and children washing up ashore are abnormal. Shooting at six-year-old girls is abnormal. 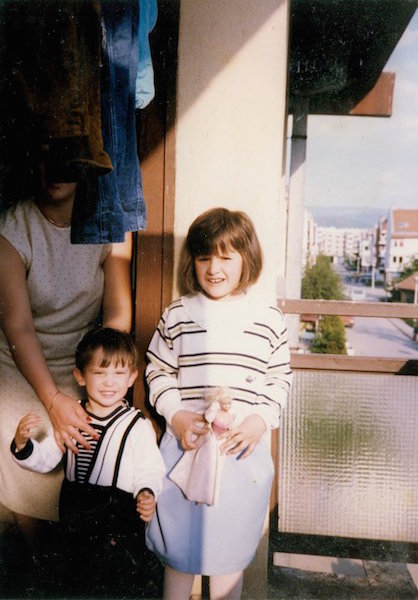 Not long after the balcony shooting, my mother, brother, and I escaped the siege. My parents put together all the money we had for the three of us to be smuggled out of Sarajevo on a cargo plane. My father stayed behind. I clung to him tightly at the airport and sobbed so hard that my whole face was wet. They lied to me, and to each other, that we would only be gone for a few weeks, just until the U.N. stopped the fighting.

We hung tightly onto each other as the cargo plane took off. We slid and screamed, and there was a loud explosion behind us once we were in the air. It was my first time on a plane, and I cried the whole time; everyone cried. Once we landed, we saw that the plane had been hit in the tail section by Serb forces during takeoff, and realized how close we had come to dying.

When our cargo plane landed, it was at a military base outside of Belgrade, much to my mother’s horror. No one knew where to go. A uniformed officer came out and walked sharply towards us carrying something in his hand, and a gun was visible in his holster. My mother held her breath and squeezed my hand tightly. My family is mixed—my father Bosnian Serb and my mother Bosnian Muslim. My name is a common name in Serbia, but my brother’s isn’t. We were too young to understand the significance of this.

“You just flew in from Sarajevo, didn’t you? I was informed a cargo plane was rerouted here,” he said in a way that made it sound like we were on holiday. He left out the part where his army nearly shot us down from the sky.

There is simply no way of lying when one is carrying two small children in pajamas, and a plastic bag full of documents, passports, diapers, and underwear. We could have passed for a homeless family if it weren’t for mom’s manicure and Ferragamos. Life, after all, was still somewhat normal until that afternoon, when we became refugees.

The Serbian officer knelt down next to my brother and studied us. Which child would he talk to, and ask for our name? If we said too much, even if my brother just said his name or my mom’s name, we could be detained or attacked on the spot.

“I’m Dragana,” I volunteered, before he even asked. My mother audibly sighed and squeezed my hand twice in appreciation, a code not discussed but understood. The officer pinched my cheek and gave me the box of sweets he was carrying before walking away.

The most important part of being a refugee is being a good loser; it’s the only way to survive this.

Like Basel from Damascus, even after fleeing the terror of war, we still were not safe. I remember the danger we faced as I see scenes of refugees like Basel desperately making their way across Europe. We had to deal with the legions of those eager to take advantage of our vulnerability—the smugglers, the criminals, the traffickers, and the violent xenophobes. Countries like Hungary also closed their borders to us, as they are doing now to Syrians. Others humiliated us to deter more refugees from coming. One of my cousins fled to Denmark, where she was denied freedom of movement and kept in a barracks for a year. Another two were held in long quarantine after they arrived in the Czech Republic, as if they might contaminate the population with their sense of loss. Even those who welcomed us did so only to a point. When the refugee population swelled, when we overstayed our welcome, we were blamed for everything from overcrowded schools to currency inflation.

At some point, refugees must make a definitive choice regarding their identity. Some adopt an Anglicized nickname, a new persona, a new history to be proud of, a new flag to pledge allegiance to, a new city to love. Others, like myself, continued to identify as a Sarajevan and a refugee, clinging to memories. I had to remember where I sat in my classroom, the name of the boy I liked, the lady at the newspaper stand downstairs. If I forgot, that meant giving up hope that we would go back one day. I would have given anything on this earth to wake up at home in Sarajevo on a dull day, watch my parents rush around getting ready for work, and run downstairs to get the paper and a pack of Walter Wolf cigarettes for my mother. Just one more time.

The most important part of being a refugee is being a good loser; it’s the only way to survive this. You learn to lose your nationality, your home to strangers with bigger guns, your father to mental illness, one aunt to genocide, and another to nationalism and ignorance. You learn to lose your kids, friends, dreams, neighbors, loves, diplomas, careers, photo albums, home movies, schools, museums, histories, landmarks, limbs, teeth, eyesight, sense of safety, sanity, and your sense of belonging in the world.

Basel, and all Syrian refugees, must master living with whatever is left of a person after everything is stripped away. Once he arrives where he’s going and sets his bags down, that’s when Basel will have to process everything, when he will count everything he’s had to leave behind. He will reflect on the past four years and wonder how the world watched and did nothing. 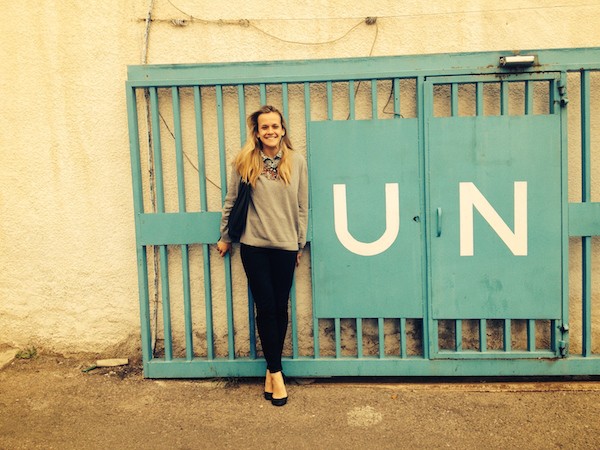 In 2014, I went back to Damascus as part of a UNICEF mission. Crossing the Lebanese border into Syria, in a sea of women carrying children and bags of clothes, I saw my mother everywhere. It was profoundly disturbing to put on a blue helmet every day before going out, and I struggled greatly to reconcile my U.N., refugee and survivor identities.

One morning in April 2014, I put on that blue helmet to tour the schools with a colleague in Damascus. We were about 30 meters from the school entrance when the mortar hit in front of us, and I fell to the ground. A guard shouted at me to get up and run inside before the next one hit, but I was too scared to move. That’s when I remembered Zinka and the balcony shooting. There is a low, soft whistle that is heard before a mortar hits very close. It happens just a fraction of a second before it hits, and somewhere deep inside, I had buried that sound and that memory.

The most difficult part of my journey as a refugee is the coming to terms with the fact that I can’t prevent this from happening to someone else. In Damascus, I often found myself telling displaced children whom I worked with that “schools and houses can be rebuilt when the war is over.” Perhaps I should have said something more pragmatic, told them they would never go home again, at least not to the place where they left their toys and friends, where they felt safe and loved. But instead, I said things like, “You’ll go back home when the war is over.” It’s obvious now that I not only lied to them, but also to myself. I only stopped identifying as a refugee when I stopped fighting, and I acknowledged that nothing will ever put my family and my life back together the way it was.

Despite these dark recollections, it’s generally not war that refugees choose to remember, but the people who help you. My mother’s colleague who snuck us out of Serbia, French volunteers who took refugee kids camping, and those who came to welcome us at the airport when we were resettled in Ohio; those are the people I think of daily. I hope Basel finds such people on his path too.