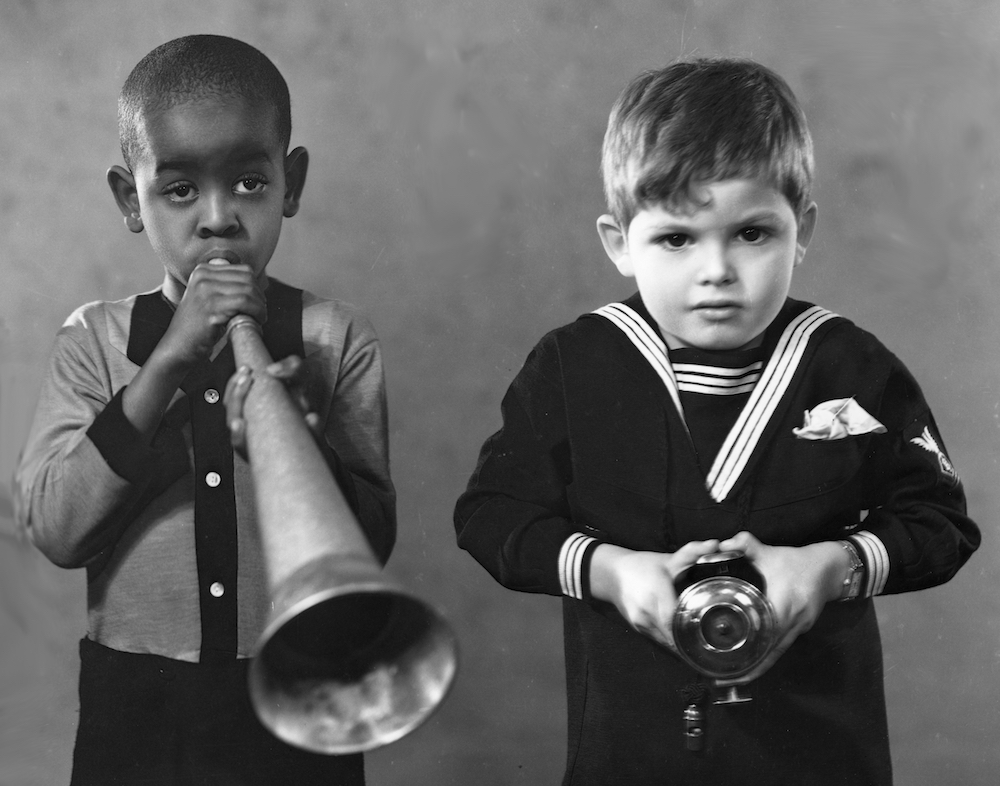 When I was a kid, I used to watch episodes of The Little Rascals on TV in our living room in Los Angeles. My parents were Korean immigrants who had moved to the city in the 1970s, the first in a wave of Korean immigrants who would transform the city’s racial makeup. I had no idea the series had been filmed 50 years earlier, that most of the stars were dead, and that it was once unusual for black and white kids to play together. By watching The Little Rascals, I was introduced to a powerful fantasy of America as racial utopia: Here was a group of kids of vastly different backgrounds who somehow managed to get along.

The Little Rascals, originally known as Our Gang, was created by Hal Roach in 1921. The films, which were originally shown in theaters nationwide and syndicated to television decades later, were an immediate hit—kids and adults loved the slapstick gags and the fiction of a kiddie society uniting to confound authority. Over the next 23 years, 220 films were produced. The success of Little Rascals was all the more surprising considering the racial climate of the time. It was the age of Jim Crow, a term that originated in a 19th-century caricatured minstrel song and was soon applied to racial segregation laws that lasted through the 1960s. With Woodrow Wilson as president and the return of soldiers from World War I, the years before 1921 had seen dozens of deadly attacks on blacks in American cities along with a resurgent Klu Klux Klan in rural areas.

Our Gang was a child-like, idealized vision of America, one that offered an alternative to the racial strife going on outside the theater. Critics are still debating whether the show reinforced the racial stereotyping of the time or whether it actually challenged the status quo in the guise of something familiar. Sunshine Sammy and Farina, Our Gang’s two original black members, were often depicted as comic “pickaninnies,” falling into barrels of flour and eating watermelon. Buckwheat, their 1930s successor, was best known for his incoherent speech and wild hair. Still, Our Gang was curiously ahead of its time in its celebration of diversity. The kids squabbled, sure, but they were also friends. They were a miniature melting pot, a slapstick version of democracy itself.

One of my favorite Rascals was Matthew Beard, who played Stymie, a wisecracking black kid in a natty vest and a bowler hat, reportedly a gift from comedian Stan Laurel. Stymie got his nickname (which he used the rest of his life) from his habit of getting underfoot on the set. Director Bob McGowan used to joke, “Well, boy, this kid’s beautiful, but he stymies me all the time.” On screen, Stymie was smart and resourceful, a heroic underdog able to outwit even adults.

Years later, when I tried to understand what Little Rascals meant, I read a biography of the cast. As an adult, Stymie derided the series’ racist caricatures: “It was mammy this and mammy that in those days.” I had wondered what it was like for him as a child on the set. Was he friends with the other kids in the cast? Or were they simply performing a fantasy of integration on screen that ended the minute the cameras stopped rolling?

It turns out that Stymie’s best friend on the set was Dickie Moore, who was white. They were an unlikely duo: Dickie usually played the rich kid while Stymie usually played the role of the urbane wise-guy. In real life, Dickie had started his career playing an infant John Barrymore in The Beloved Rogue. Stymie had started his career playing a nameless “pickaninny” in Hallellujah!

What they shared was precocity and talent, as well as the loneliness and burden of being child stars. Both were Depression kids, responsible for supporting their entire families at a time when one-quarter of the labor force was unemployed. They also shared onscreen chemistry in films such as Free Wheeling (1932), where Stymie cures Dickie the rich kid’s stiff neck by taking him on a wild ride.

Offscreen the two became close friends. Dickie fondly remembered being invited to Stymie’s house, where the two boys played on a tire swing and made ice cream. Their playdate required crossing Los Angeles’s strict color line of the 1930s. Stymie lived in east Los Angeles, where the “colored” neighborhoods were, while Dickie went home to the Westside, where racial covenants kept out blacks, Mexicans, Japanese, Jews, Italians, Russians—anyone who wasn’t “100 percent American.”

When it came time for the Moores to invite Stymie to their home, the boys played cops and robbers and feasted on a leg of lamb with garlic Dickie’s mom roasted in honor of their guest. After a night’s sleep, the two boys went to a vacant lot to play—just like the kids they played in Our Gang. “Stymie was the only child actor who spent the night at our house,” Dickie said. “Of all the kids in pictures, Stymie was my best friend.”

The boys’ interracial friendship seemed like something out of a Hollywood movie. But reality wasn’t far off-screen. When Stymie’s parents didn’t show up at Dickie’s house, as scheduled, at 5 o’clock to pick up their son, Dickie’s father went on a walk looking for them. He found Stymie’s parents a block away, seated in their parked car. With the boys now with him, Mr. Moore leaned in, and joked, “Mrs. Beard, what’s the big idea of parking way up here? We live down the block.”

Years later, Dickie still remembered Mrs. Beard’s response. “Oh, you know how it is, Mr. Moore,” she said. “We didn’t want your neighbors thinking you go around with colored folks.”

Neither fame nor their friendship protected the Little Rascals from the reality that awaited them. Dickie left Our Gang soon after, starred in Oliver Twist, and reportedly gave Shirley Temple her first on-screen kiss in Miss Annie Rooney. In later life, he became a PR executive. Stymie lasted a few years longer with the Gang, retiring from show business halfway through the 1935 season at the age of 10,and later serving time in prison for selling heroin. The two boys lost touch but still remembered each other fondly. When they reunited almost 50 years later, Stymie waved off Dickie’s questions about the series’ problematic racial humor, perhaps reluctant to mar the occasion.

It’s easy to see the friendship of Dickie and Stymie as a testament to childhood innocence and the transcendence of the color line. But this is a mistake. As an adult, Dickie was brutally honest about why he could be friends with Stymie: “Today, I wonder if I really felt superior or was less afraid of Stymie because we could not compete for roles,” he said. Stymie would never be considered for the title role in Oliver Twist, just as Dickie would never be considered for the “pickaninny” roles available to Stymie. The two boys weren’t friends despite their race; they were friends because of it.

In the years since, the Little Rascals’ bright vision of interracial friendship has not come to pass: We have gone through cycles of “colorblind” optimism and sometimes violent reminders that reality doesn’t conform to the dream. Los Angeles is still haunted by its racial past. When my parents purchased their first home in a neighborhood adjacent to Culver City, on L.A.’s Westside, my father was shocked to find that the house’s deed stipulated that “no person of African or Negro blood, lineage, or extraction” could buy or rent the property. By then, racial covenants had been declared unconstitutional, but there the history was, still in black and white. The unresolved issues in Los Angeles’s multicultural stew bubbled over in 1992, when I was 15, triggered by the acquittal of four white police officers in the videotaped beating of the black motorist, Rodney King. The L.A. Riots exposed new interracial tensions, too—between blacks in South L.A. and Korean storeowners. My own parents nearly lost their store. A generation later, Barack Obama’s election in 2008 was hailed as a sign that the U.S. was finally “postracial,” but seven years afterwards it’s clear that the fantasy of a multiracial America remains as elusive as ever.