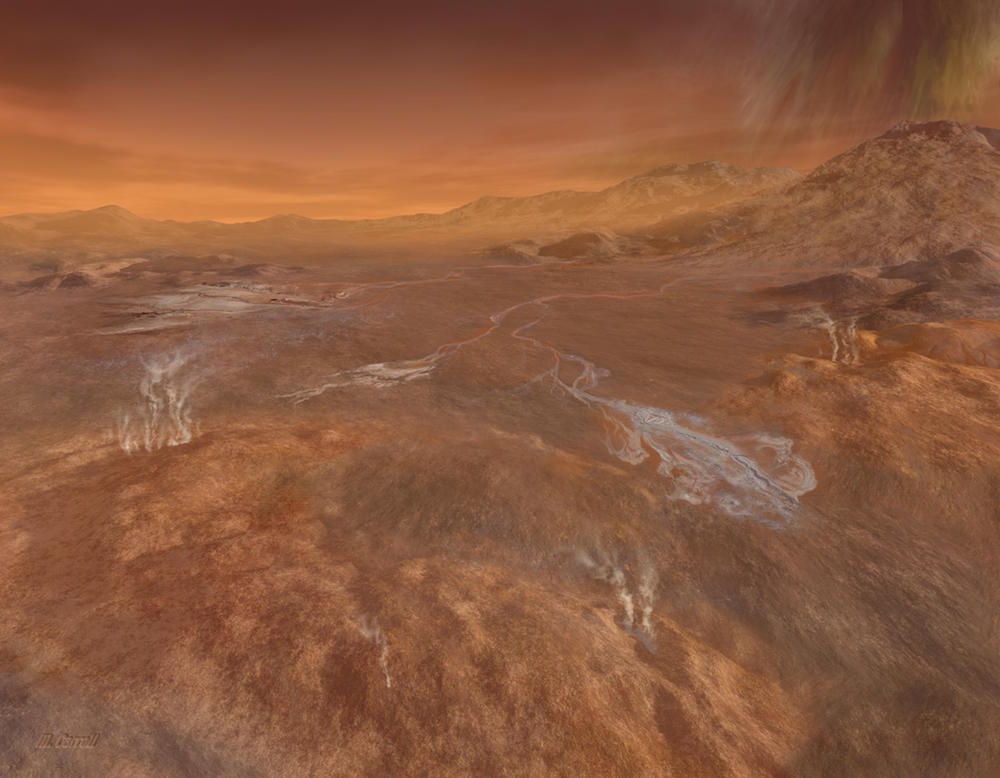 Living in Tucson, Arizona—a Sonoran desert city surrounded by tall mountains—can make you obsess about rain. In 1993, I had just moved into a new office at the University of Arizona’s Lunar and Planetary Laboratory that had a floor-to-ceiling view of the 9,000-foot-high Catalina Mountains. I had a ringside seat to an art gallery of beautiful convective cloud towers, which send hot air up over the desert mountains on late summer afternoons. Rain was rare, but when it happened, it came in a torrent. It would soak the soil and flood the streets, as dramatic shows of lightning and thunder played overhead. It was an annual tradition in Tucson, by the time late spring’s torrid heat baked the desert, to wonder how soon this “monsoon” weather pattern would arrive to bring relief. 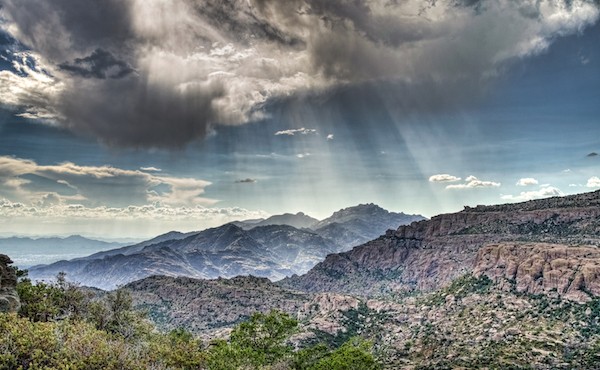 Rays of light during monsoon rains over the Catalina Mountains outside Tucson, Arizona.

This obsession with desert rain also meant it was hard to resist dreaming about the possibility of rainstorms on Titan, my favorite moon of Saturn, which I was studying (and continue to study) through the NASA and European Space Agency Cassini-Huygens mission. But we knew from data gathered in 1980 by Voyager—the first spacecraft to visit the Saturn system close-up—that there was essentially no water in the moon’s nitrogen atmosphere because it was too cold.

So what would rain on Titan even be made of? Methane takes water’s place on the moon as cloud-forming gas, and thus would be the main ingredient of raindrops, if there were any. And because nitrogen is so soluble in methane, each droplet of rain would have to be 20 percent nitrogen, as opposed to Earth’s droplets, which carry carbon dioxide but essentially no nitrogen. How would these exotic methane rains behave? Would they be gentle and steady, or violent downpours like those in the desert?

First, to know if rain was even a possibility, we had to figure out where the methane on Titan was and wasn’t. Voyager told us that the lowermost part of the moon’s atmosphere was not saturated in methane; the “humidity” (which means the ratio of the methane in the air to the amount required for saturation) at the equator was about 50 percent. That’s not a desert—more like New York City or Chicago. Saturn is almost 10 times farther from the sun than Earth, so there is not as much solar energy to warm the air and push it upwards to the altitudes where clouds can form (and then release its moisture as rain when it cools). It seemed that for any rain to get going, special conditions—mountain ramparts to force moist air upward, and seasonal shifts in winds and sunlight—would be needed.

Armed with these ideas and my picture-window view of the desert mountains, I worked with Maria Awal, a master’s student in atmospheric sciences, to model what it would take for methane rainstorms to form on Titan. We found that a rising column, or “plume,” of methane-rich air that was buoyant compared to its surroundings would be needed, and that Titan’s atmosphere could in fact create one. But the distant sun could provide only enough energy to trigger one or two storms anywhere on Titan at a given time. In other words, Titan storms, if they existed, had to be sporadic but violent—gully washers of the true desert style.

What about the nature of the raindrops? Shortly before he arrived at our laboratory, the planetary scientist Ralph Lorenz speculated that they must be giant and flattened, falling so slowly that the storms that produced them might drift away before the drops even hit the ground. And those drops that evaporate in the dry air—which might be most of them—leave behind “ghost droplets” of ethane—a sister molecule made from methane’s destructive encounter with ultraviolet sunlight high up in the atmosphere.

With Lorenz and another scientist, Caitlin Griffith, who came to Arizona in 2002, our Tucson lab became a thundercloud of research on Titan’s storms as we awaited an up-close and personal view of the moon. That view would come from Cassini-Huygens, the Saturn-orbiting spacecraft launched in 1997 that carried a probe designed to land on Titan. The mission would tell us whether all our guesswork was right or wrong.

In 2004, Cassini-Huygens dropped into Saturn orbit. Early images of Titan showed a south pole bathed in early summer sun with masses of slow-moving convective clouds. Evidence of dark spots under the clouds led us to wonder: Could those be ponds of methane that collected after storms? When Huygens made its descent through Titan’s atmosphere the following year, one of its instruments measured the amount of methane at different altitudes in its descent, and found that it was quite a bit higher than typical cumulus clouds on the Earth.

Most striking were the pictures taken during descent. As the probe drifted over a rocky hill—the rocks on Titan are actually made of extremely chilled water ice—at roughly the cruising altitude of a jetliner, it captured a series of vein-like channels, carved into the hillside in just the way one would expect from rainfall. Bathed in the dim twilight from a distant sun, they had to be caused by streams of methane as they ran down to a dark plain—the signature of occasional and intense methane storms. 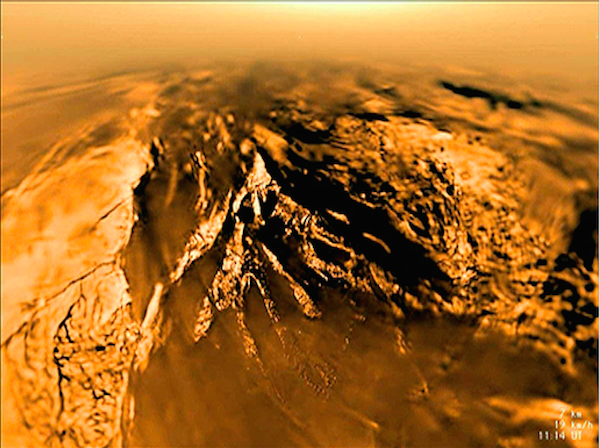 The Huygens probe captured this image of Titan’s landscape as it descended through the moon’s atmosphere.

As the seasons changed, Cassini saw vast clouds, covering thousands of miles of terrain, appearing and disappearing around Titan’s equator. They left behind a dramatically darkened surface, which then brightened again. We know that moist soils on Earth look dark in space when they are doused with rain, so why couldn’t Titan’s icy “soil” be darkened by intense methane rain?

What the spacecraft had found was an active methane weather pattern—yes, clouds and rain—on a moon a billion miles from the Earth. Mars has dust storms, Io has volcanic eruptions, and Pluto may have methane snow, but Titan is the only place we know of in the solar system that has liquid rainfall like we have on Earth. Only Titan has environments that allow clouds to make rain, which carves out gullies and valleys in the landscape, ultimately to find its way to the polar seas—seas, as Cassini has discovered, that are so vast that they contain hundreds of times more hydrocarbon in the form of methane than all the known oil and gas reserves on the Earth. What secrets do they hold?

Five years ago, I left the Sonoran desert for wetter and cooler climes back east. The snow outside my window in Ithaca, New York, has no analog on Titan—it’s too warm for methane snow anywhere there. But Titan’s methane cycle has almost everything else that Earth’s hydrological cycle has—clouds, rain, streams, rivers, and seas. (Titan just lacks the globe-girdling ocean.) Titan is our home world transcribed into a minor key. The only witnesses have been our robotic emissaries Cassini and Huygens. Will human eyes someday witness firsthand a Titan monsoon rainstorm?

As I think back to that Tucson office with the panorama of summer thunderstorms moving off the Catalina mountains, I conjure up a fantasy of the future: a lonely base halfway across the solar system with a picture-window view of methane rain falling on an icy hillside, perched next to the final resting place of the Huygens probe, an artifact from long ago.