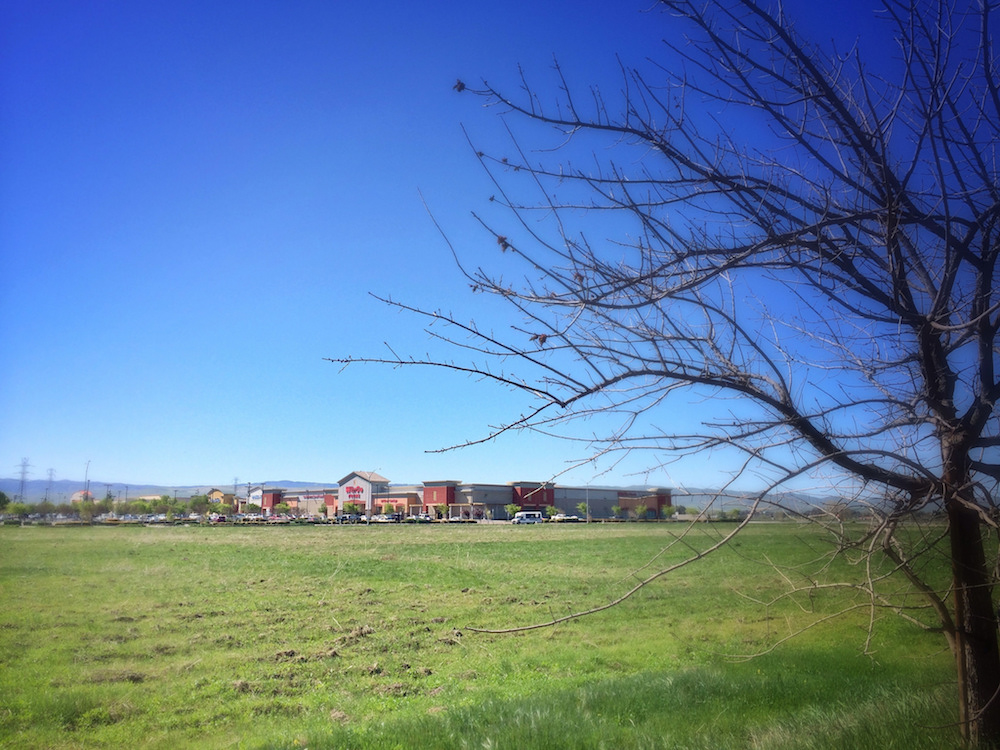 You might know Tracy, California, if you’ve traveled along Interstates 5 and 580, and had to decide if you want to head towards the Bay Area or Sacramento. What we call the “Tracy Triangle”—hard to get out of, not unlike the Bermuda Triangle—sits within those freeways and a conjoining interstate built in 1970 that’s now called “Business Interstate-205.”

Nobody would have thought to reside in Tracy if it weren’t for the need to stop over on the way to somewhere else. “I never met a person from Tracy who didn’t apologize for it,” said Malcolm Margolin, founder of the California publisher Heyday Books, and longtime observer of all things California. For better and for worse, my hometown is a place where the booms and busts of nearby cities pass through and reshape lives; today, Tracy is part of a region from Oakland to Stockton with the fastest job growth in the state, as the Bay Area boom grows beyond the East Bay.

Once home of the native Yokuts people, so prone to flood that a Catholic priest, Father Pedro Font, described it in 1776 as uninhabitable (“I have never seen an uglier country”), this American city got started providing services for early travelers. As the San Francisco Bay Area and Sacramento communities developed underneath the Mother Lode during the Gold Rush, places like Tracy later provided the brothels, saloons, and gambling, as a town dubbed “Poker City” during the Prohibition era might do. On the epic road trip Jack Kerouac made famous in the late 1940s, Tracy was still a transient kind of place—a town where trains howled and brakemen ate surly meals in diners by the tracks.

But Tracy didn’t stay a brothel—or a railroad—town. In the middle of World War II, Tracy got a defense depot. And as America boomed with post-war affluence, the Bay Area drew free thinkers and freedom seekers from the U.S. and the world. Occasionally strange things spilled eastward over the Altamont Pass. And if it could go wrong, it sometimes went violently wrong, as it did at the Altamont Speedway’s 1969 Free Festival, a purported Woodstock of the West. The Hell’s Angels spilt blood during the Rolling Stone’s December 6 set, reckoned as perhaps rock ’n’ roll’s all-time worst day.

Tracy is a place where ideals can get punched in the face by hard-nosed reality. Only a few years after the Deuel Vocational Institute opened in 1953 as the California’s Department of Corrections’ progressive idea for bringing disruptive young (potentially “salvageable”) inmates together with adult offenders in a new rehabilitative scheme, it gave birth to the Mexican Mafia (La Eme) in 1957. As young men from Mexican-American L.A. street gangs got tired of being stepped on, they emerged as the prison system’s ruthless powerhouse.

Rising prices for proper Bay Area homes meant the California Dream moved further inland in the 1970s and 80s, fueled by developers who marketed Tracy as an affordable version of suburbia in the middle of fields of walnuts, sugar beets, and tomatoes. My father followed that trajectory to this “agriburbia,” starting a business first in his garage in the early ’80s and later on the town’s old thoroughfare. My grandfather knew Tracy before my father moved there because he was a trucker. And while I grew up, he’d still occasionally come through Tracy on his runs elsewhere, driving for Thrifty, romancing the road.

A common thing shouted on my small agriburban street, where truckers sometimes parked their big rigs and cars raced through faster than they should, was my dad’s “Slow down!” Where was everyone going? My elementary classmates and I would take field trips to the San Francisco Exploratorium and to the Sacramento train museum; we shopped at malls in Stockton and Modesto. So what were we connected to? The Bay Area? Sacramento? The San Joaquin Valley?

This strange nowhere added to our identity issues, which were mixed with the confluence of so many racial and social identities in one place. My friends were mostly Mexican-American; the family across the street was African-American. In addition to the truckers, we had one neighbor who worked at the town recycling center, another who worked for the post office, and another who was known for breaking up the family across the street with calculated sexual escapades. A gay couple lived on my street, often the victims of hurled abuses and at least once of manure catapulted onto their doorstep.

As the Bay Area funneled in, reverse migration-style, and as new subdivisions popped up everywhere, vandals got busy in Central Valley fashion. Many second-generation immigrant youth sought identity through gangs through the 1980s and ’90s (though, of course not all did, and gang members are not always easy to define). Even as local law enforcement policed people during those decades, contributing to California mass incarceration, Tracy youth gangs grew strong, competing with those in more urban hotbeds in the Bay Area, Stockton, and Sacramento.

And the drugs came through.

It seemed like everyone had to fight in those days when I was growing up—for power and identity, for a place in the world. Tracy became a hellhole, trapped between the constant pressure to grow without appropriate infrastructure, and the crime that was hard to ignore. Former mayors Clyde Bland and Brent Ives tried to squelch the idea of a strong gang presence in Tracy, purportedly minimizing crime statistics to continue to pitch the place as suburbia. A slow-growth ballot measure was eventually passed in 2000 to counteract the land rush of Bay Area incomers. Of course, developers found ways to circumvent the limitations. A new planned community of Mountain House—five miles neighboring Tracy, just north of the I-205—sprang up in the early 2000s, though it faltered in the 2008 recession.

Every time I go back to Tracy, it looks smaller and smaller, more and more insignificant. Perhaps I’ve just grown out of it. Or maybe it looks smaller with the Bay Area having grown around it, spilling into Lathrop, Manteca, and elsewhere. Many of the city’s former leaders – who may have some apologizing to do for exploiting this place and its people—have moved on, as is fitting for a transitional place. But most people there are working harder than ever and keep dreaming the dream, in spite of the odds. Even though there are public housing projects on the southside or westside that developers won’t touch, many of my former classmates are still selling real estate, peddling the wood and stucco that goes into new homes, or building around the city and its slow-growth limits.

B-list celebrities still move to Tracy, looking for a fresh start—like MC Hammer after his bankruptcy and fall in the music industry, as he transitioned to the life of a preacher. Tracy doesn’t suffer pretension: When the 27-year run Dried Bean Festival tried to rebrand itself as the “Taste of the Valley Art and Food Festival,” it wasn’t long before it shut for good in 2014.

I left Tracy at age 16, and then after a brief return departed again at age 20 for college. It remains a place I have no desire to go back to. From afar it seems to remain riddled with complexities and irresponsible people, with transients and opportunists who form all sorts of alliances without ever committing fully to one another or to the place.

Yet while I cannot imagine returning to stay, if I ever did, I certainly wouldn’t apologize for Tracy nor would I apologize for being from there. The only apologizing I’d need to do is for having left.