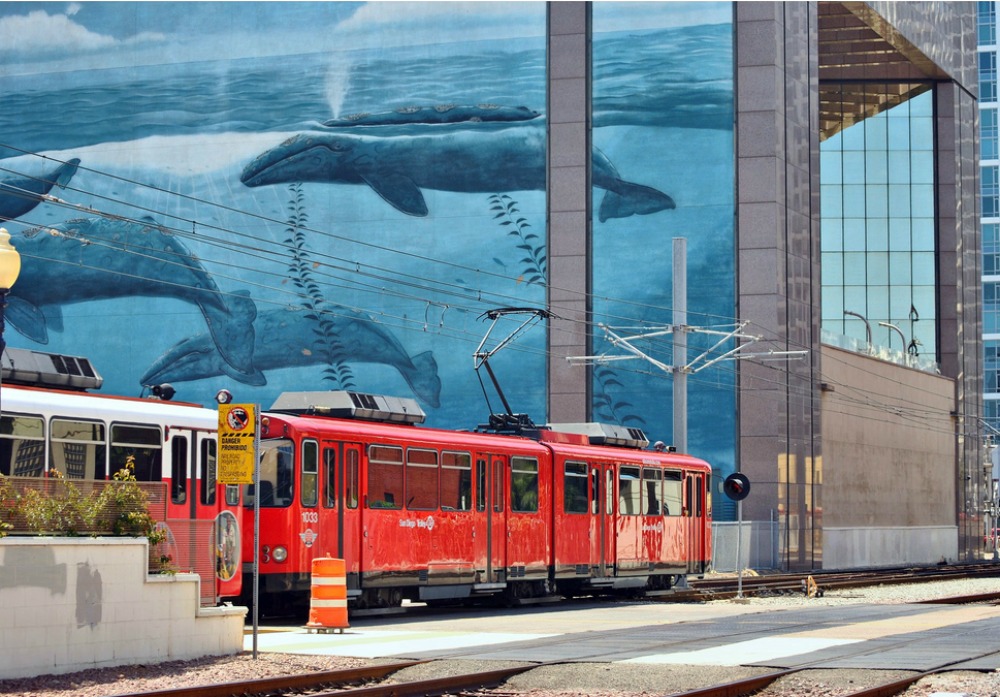 In 2011, the San Diego Performing Arts League was in trouble. Once one of the Southern California city’s leading arts organizations, the Performing Arts League, a nonprofit that provides marketing and ticketing for performance groups, had gone through a tumultuous period of leadership changes and funding mismanagement that brought it to the brink of collapse. League members met that summer and considered shutting the venerable institution down.

From the near-closure of the San Diego Opera to controversies surrounding the heads of the city’s museums and cultural programs, San Diego has struggled to maintain a lively, accessible arts scene. Yet in size and wealth, the city rivals America’s most culturally rich destinations. What’s holding it back?

In recent years, the city has made a big push to bolster arts institutions and offerings. New people are running arts organizations. The long-delayed construction of a central city park, which will double as a large performance space, finally is underway. And the San Diego Performing Arts League, back from the brink, is poised to launch the city’s first-ever Theater Week.

Is San Diego finally on track to make its mark in the arts globally? Or will it always be relegated to the shadows of America’s arts leaders like San Francisco and New York? In advance of the February 20 Zócalo event “Will San Diego Ever Become a Great Art City?,” we asked experts in the city’s arts scene: What attributes—cultural, economic, and social—must San Diego develop to become a world-class arts city?

It’s a critical moment for San Diego cultural institutions, many of which are in a state of transition. The San Diego Symphony, under a new, innovative CEO, is looking for a new music director; the San Diego Opera, under new leadership, is looking to become more relevant to the community. The La Jolla Music Society, also under new leadership, is building a new concert hall, and the Museum of Contemporary Art is planning a significant expansion. The San Diego Museum of Art is renovating its galleries and exploring ways to better engage the community.

While virtually all of these endeavors could contribute to San Diego fulfilling its potential as a “world-class” cultural center, the only thing standing in the their way is the quality of their volunteer leadership. The people hired on staff are largely in place to do something special, but seemingly every year something happens on a cultural board that makes you wonder about the commitment and the seriousness of the broader San Diego community, whom the volunteer board members represent.

In 2014, the San Diego Opera’s board, citing donor exhaustion and declining ticket sales, tried to shut the company down (fortunately the board, after numerous resignations, reversed its vote). In mid-2015, the board of arguably San Diego’s most successful museum, the New Children’s Museum, severed its relationship with its highly effective director less than a month after the museum set records for attendance and fundraising. Go figure.

There’s no question that San Diego’s arts institutions are moving in a promising direction with renewed vigor. What they need most of all is more “world-class” volunteers and board members with the commitment, energy, and vision (all which lead to the ability to raise cash) to help them fulfill their “world-class” potential.

James Chute is the former music and art critic of the San Diego Union Tribune. Find him at facebook.com/jchutearts.

I don’t accept the premise. In my corner of the arts sector—the theatre—San Diego is a world-class city. The Old Globe, the city’s flagship arts institution for 80 years, is now the sixth-largest regional theatre in the country. Three musicals that originated here are running on Broadway this season and will tour internationally. Plays that we premiere routinely enter the national repertory, and artists we train go on to major careers on stage and on camera.

And the Globe is only one part of San Diego’s thriving theatre scene. The La Jolla Playhouse, San Diego Repertory Theater, and dozens of smaller companies thrive beside us in an ecosystem that is as vibrant as any in the country.

Still, there are issues we must address as we lead the way for the other arts organizations in town. Our audience, like those at large non-profits around the country, is largely white, older, and wealthy. Demographically, it doesn’t match our city, which is majority non-white, young, and lower-income. We are devoting enormous energy to breaking down the barriers that prevent this majority from participating in our programming. Our new “Globe for All” program, for example, brings professional Shakespeare for free to community-based organizations around San Diego—homeless shelters, senior centers, public libraries, refugee centers, military installations, and even correctional facilities.

This is the work that our city needs to do on a macro scale. It is made possible solely through contributed income, and that’s the big story. To sustain San Diego theater as a world-class force, and to make the arts a resource for all, corporations, government, institutional philanthropies, and, most of all, individual donors need to join us in expressing a core value: The arts matter, and they should be part of life for every citizen in a great 21st-century American metropolis.

Barry Edelstein is the artistic director of the Old Globe theater.

It is the responsibility of museums to select and present great works of art. It is also a priority to make art more accessible, whether via community outreach, creative content, discounted admission, or education programs. And technology must be embraced—rather than be seen as an impediment to experiencing the essence of a painting or a sculpture.

The 92101 ZIP code is said to have more museums than any other in the U.S., and San Diego County is fourth out of all counties in total number of museums. With such a large population of cultural resources, as well as exceptional university programs, it is incumbent upon us to collaborate to elevate this experience and increase reach.

To want to become a world-class arts city, we must also encourage creative disruption. San Diego is an innovative city, and we can take cues from this willingness to do things differently by presenting art in ways that people aren’t used to seeing. The most significant works of art are based in conflict, because they challenge conventional thinking and provoke conversation.

At the San Diego Museum of Art, we continue to build on the strength of the art to invite and entice a multicultural audience. As cultural institutions in San Diego, it is our obligation and our pursuit to be kinetic and nimble, to adapt our tools and ways of communicating in order to share our best art experiences.

Roxana Velásquez is the executive director of the San Diego Museum of Art.

In many ways, San Diego already is a world-class arts region. Though former Chamber of Commerce director Jack Borchers once said San Diego was more like “Nebraska with palm trees” when he arrived in the 1940s, we can’t discount the many artists, arts donors, and arts advocates over the years that have given San Diego something people aren’t used to finding in a resort environment: museums, galleries, theatres, and performing arts centers. We have vibrancy and culture. We have the arts.

Today, Travelocity has referred to San Diego as the “newest cultural mecca in the United States.” The San Jose Mercury News called San Diego a “Sun-filled paradise brimming with culture.” Even The New York Times said that in San Diego, “the air is as redolent of greasepaint as it is of the sea.” Why? In the past 20 years, more shows on Broadway got their start in San Diego than any other city except London.

As Westways magazine told its readers, the city’s unofficial civic motto has changed from “surf’s up” to “curtain’s up.”

To continue this progress, we need to plan for the next 30 years. From my perspective, this requires the following: growing the audience for performing arts and buyers of art from San Diego-based artists; developing both affordable housing to keep artists in San Diego and affordable studio and gallery space for the public to see their work; bridging the increasing divides that traffic creates around the county so it’s easier for artists, arts organizations, audiences to connect; and bolstering civic, business, and foundation support for the arts, which isn’t keeping pace with the growth of the arts sector.

Alan Ziter is the director of the NTC Foundation, which is renovating a former Naval Training Center in San Diego into an arts center. He co-chairs the San Diego Regional Arts & Culture Coalition.

As a San Diegan, I optimistically believe San Diego is already a world-class arts city. Sure, the grass may be greener in places like Paris, New York, or San Francisco, but we have plenty of green grass to behold here. I have two words for anyone rolling their eyes already: Balboa Park.

But I concede San Diego must develop several attributes to become a better world-class arts city. First, San Diego needs to develop into a city with stronger culture. That is to say that San Diegans must increase their hunger and concern for excellent art, because this demand will fuel arts growth and supply for both San Diegans and the world to enjoy. This is simple economics.

Second, San Diego must develop into a city that receives more significant arts support from its local government, in particular financially. For example, the New York City Department of Cultural Affairs, which funds many arts and culture non-profit organizations, projects, and festivals in New York City, has an annual budget of more than $150 million per year. This is more than 10 times what the City of San Diego allocates for similar causes. San Diegans must also do more privately to support the arts financially. San Diego will close the gap artistically with other higher regarded world-class arts cities if it closes the financial investment gap.

Third, San Diego must develop into a city whose large arts institutions and venues pursue patrons of all demographics. The city should showcase local and amateur artists in an appropriate measure with famed and foreign ones. Inclusiveness will increase economic investment in arts and enrich arts culture in San Diego.

Jason Whooper works as an employment litigation attorney in San Diego, California, and serves as a commissioner for the City of San Diego Commission for Arts and Culture.

San Diego already has the most important element in place already to become a world-class arts city: institutions and local artists that produce art of a very high quality and with great integrity. I’ve been impressed across the board since coming here last summer by the performing and visual arts in San Diego—it was a real surprise for me. We also have a group of cultural leaders in place who want the arts be integral to the conversation about what makes our city great, and want to work together in real ways to make San Diego’s cultural life even richer.

I think what still needs to be developed is a real understanding by citizens and officials of the impact of the arts. As arts leaders, we spend a great deal of energy trying to quantify our economic impact, but it goes much deeper than just looking at the number of jobs created or dollars spent by arts consumers. What really will move the needle in this conversation is beginning to understand at how the arts create a sense of place that is an enticement for visitors to San Diego and for individuals and companies considering San Diego as new home.

David Bennett is the general director of San Diego Opera. Previously, he was the executive director of Gotham Chamber Opera, in New York City.