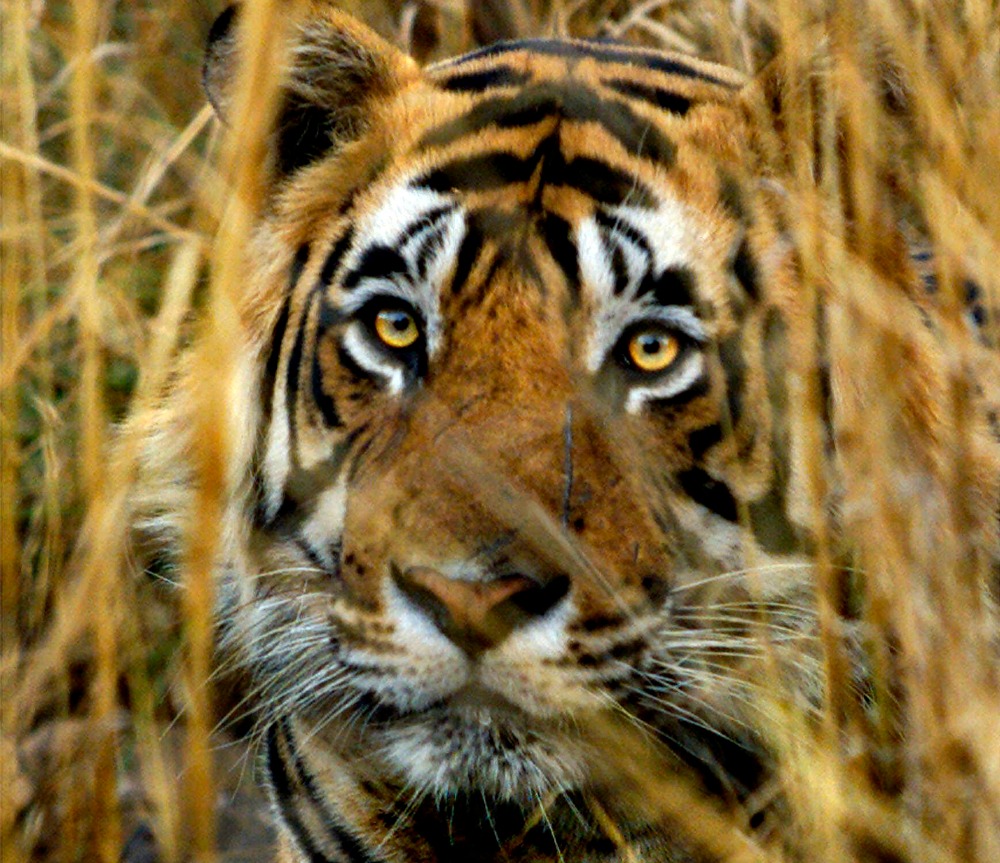 FILE - In this March 23, 2000 file photo, an Indian tiger looks out from a cover of straw grass in Ranthambhore National Park in India. India's top court banned tourism in tiger reserve forests across the country in an effort to save the endangered big cat. (AP Photo/J. Scott Applewhite, File)

Tigers are for most of us a hypothetical necessity.

Hypothetical in the sense that very few of us spend any time around tigers outside of zoos, though we interact with images of tigers on a daily basis, depending on what type of cereal we eat, sports team we root for, or comic strip we read.

Necessities in the sense that most of us would agree that the world really, really needs tigers; that tigers must remain lurking in the jungle, with their stripes rippling under the dappled light. The existence of tigers is a certification that wildness still exists and that conservation works. If we are going to live in skyscrapers with antibacterial countertops, use Skype for transcontinental chitchat, and actually dine on a substance called Soylent, we need to know that somewhere these gorgeous, powerful, and unpredictably violent animals still roam. The further we live from danger, the more important it is that the tigers be out there.

Tigers in India are a conservation success story, a bright orange stripe in what has otherwise been a century of heavy extinction. A hundred years ago, India had tens of thousands of tigers, but by the early 1970s they had dwindled down to a mere 1,200. Prime Minister Indira Gandhi started Project Tiger in 1973, relocating 200,000 people away from designated tiger zones, and creating buffer zones between tigery jungles and more developed areas. In 1975, tigers were listed as an endangered species. Tiger numbers have risen and fallen over the years but in January of 2015, there were 2,261 tigers in India—70 percent of the world’s wild tigers. (There were about 13,000 non-wild tigers in 2010.)

The Paris Climate Accord signed in December made preserving tropical forests a key strategy for dealing with climate change, and Project Tiger and other initiatives in the Sunderbans, the giant mangrove swamp on the border of India and Bangladesh, seem to offer a successful model for that: Careful stewardship can preserve whole biological zones, complete with beautiful wild predators. But on closer inspection, Project Tiger is also a cautionary tale about what happens when tigers (and conservation) are a bigger priority than the humans who live nearby.

Some people have paid a very high price for the world’s few tigers. People who live in the buffer areas around the Sunderbans have suffered from so many deadly tiger attacks that there are about 3,000 so-called tiger widows in India and 10,000 in Bangladesh. A few weeks ago, I happened across a journal article titled, “Ecopsychosocial Aspects of Human-Tiger Conflict: An Ethnographic Study of Tiger Widows of Sundarban Delta, India,” published in Environmental Health Insights earlier this year. The study was written by Dr. Arabinda Chowdhury and three colleagues who work in an emerging field called ecopsychiatry.

Dr. Chowdhury, a psychiatrist who spends part of his time working for the National Health Service in the U.K., is particularly concerned about the psychological cost of human-tiger conflict. From 2001 through 2006, he and his team surveyed more than 3,000 households in the Gosaba area, which is right at the edge of the tiger reserve, then did psychiatric evaluations of 49 tiger widows, spending as long as three days with each woman.

Before they ever came face-to-face with a tiger, these women’s families were very poor. Encroaching seawaters have made fields salty, forcing farmers to find other ways to earn money. Entering the tiger zone to get wood, hunt for honey, or catch tiger prawn seed have become the main local sources of income, but they require paying the government for a permit. Men from poor families haven’t been able to afford the permits so many sneak in at night. In the Indian area of the Sunderbans, about 40 people—mostly those sneaking around without permits—are attacked by tigers every year.

After they lose their husbands to tigers, widows become much poorer. The measure of extreme poverty is living on $1 per day, but many of the widows and their children in the survey survived on just $6 per month. They frequently starved and ate foraged roots and scraps from better-off families. Because many of their husbands were killed while working illegally, they were not able to have funerals or publically mourn them for fear of punishment by authorities. The widows had few skills: Of 65 tiger widows in one survey, only three could read.

But the widows’ poverty has been amplified by another factor. In that region tigers are “not just an animal, they’re a god-like concept,” as Dr. Chowdhury put it, and tiger deaths are seen as signs of the wrath of the forest goddess Bonobibi. Families and communities shun tiger widows. One woman told the team that she was waiting until her children were grown to kill herself. “The meaning of life has changed completely after his death. The relatives became distant, [the] community looks down on us and excluded us from any social festival.” The psychiatric team diagnosed many of the widows with major depressive disorder and dysthymic disorder, and (using a series of questions) determined that the women’s scores on a test of stigma were approximately twice those of other widows in the area.

The idea that we can measure a conservation project by a simple metric—number of tigers—gets complicated when you look at those stigma scores of tiger widows. Saving tigers is a worthy goal, but it requires political will to make sure that the people who live close to the tigers have enough resources to keep them out of harm’s way. (And to make sure that measures to protect tigers, like requiring expensive permits, do not harm the poorest.) The plight of the tiger widows is just the top layer of a much larger problem: a lack of electricity, clean water, transportation, health care, or industry surrounding the conserved areas, where the World Bank estimates that 1,700 children under 5 died in 2008 alone from dirty water and poor sanitation. The charismatic tiger brings our attention to the tiger widows, of course, but the toll of filthy water is many times higher. Conservation needs a moral compass that considers human costs.

India has been debating how to better balance conservation and development for decades, and in 2006 the country passed legislation on the rights of forest people, but that was not extended to the Sunderbans. Since the study, Dr. Chowdhury says, some things have improved in the buffer zone, and a Bangladeshi group called LEDARS has helped many tiger widows on the other side of the border. In central India, a nonprofit called Satpuda works with more than 80 villages near tiger reserves to provide jobs, medical care, and education—in addition to doing tiger conservation. Dr. Chowdhury has a dream of training people in villages to do basic psychological counseling as part of a medical team, while encouraging highly skilled psychiatric professionals to visit during their vacations. But it will require a lot of political will to address the deep problems in the area: poverty, population growth, changing climate, and the human-tiger conflicts.

The Western environmental movement of the 1970s aimed to protect wild animals from humans, but the next environmental movement can’t succeed morally or practically unless it also protects and enhances the lives of the poorest humans. When we finally get down to combatting global warming, we also need to tackle development aggressively. This will mean facing up to the real-life tensions between the ideal of living “naturally” in nature and letting nature live.

Ironically, the best approach for humans may be to simply leave nature to the tigers. Indian academics estimate that if sea levels continue rising in the Sunderbans and strong tropical storms keep hitting the area, it’s going to be too dangerous for human beings to continue living there and as many as 13 million climate refugees from the mangroves in India and Bangladesh could flee. There’s a growing discussion that the better solution in the long run may be to move the humans to urban areas with electricity, clean water, jobs, and access to education.

Then, like us, these Sunderbans exiles may live in dense cities, work in high rises, chat long- distance, and eat strange manufactured foods. And the tigers can continue to roam wild. Somewhere out there.