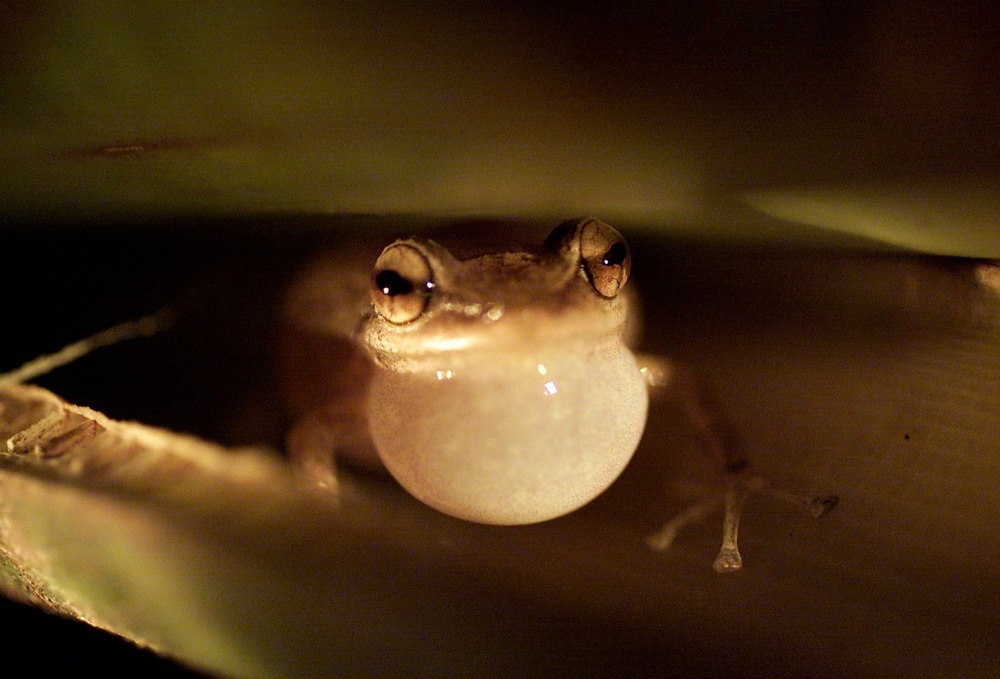 For some people, spring begins with the sound of birds. For me, it’s frogs.

All winter, frogs crouch hidden in the leaves, their outsides frozen so hard they’d make a “clink” if you dropped them. They survive because the interior of their cells are propped up by a sugary antifreeze peculiar to frogs. As the weather warms up, they unfreeze and reanimate, like something from a fairy tale. And then they find themselves a nice muddy spot and begin singing.

Frog songs are meepy and beepy, some clattery, others deep. If you have a big enough collection of frogs, the puddles around you will vibrate with a whole froggy symphony, heavy on the percussion. There’s a pond near my house in Maine that fills with spring peepers, whose high-pitched chirps make a loud cacophony that sometimes organizes, for a few seconds, into something like a pattern, before separating. I wonder whether the frogs really sync up, or whether my brain is working overtime to organize the sound. The racket at the pond seems to hijack my brain—thoughts of grocery lists, taxes, and politics are replaced by the seething urgency of frog talk.

Scientists have counted about 7,000 species of frogs worldwide, but modern life is tough on them. Since 1995, 168 species have gone extinct and nearly 2,500 species’ populations are in decline. Frogs respond to small environmental changes: They are sensitive to chemical pollution in water and noise pollution near their breeding puddles. Invasive bullfrogs eat up tasty smaller frogs, the chytrid fungus has devastated frogs in the West, and a parasite that lives in snails has caused deformed frogs. And there is climate change. There are many reasons to mourn the frogs (and even more reasons to save them!) but what I appreciate about them is that their songs give us one of the clearest experiences of what it’s like not to be human. Stop and listen to the choruses in the spring and you get an infusion of froggy priorities: the mad biological cycle of mating, egging, morphing, and frogging.

One winter evening about five years ago, my boyfriend played me his CD of New England frogs. The first songs on the recording were the spring peepers. Then we heard the mournful foghorn of the bullfrogs, the duck-like chuckle of wood frogs, the implosive green frog, the dreamlike trill of the American toad. Listening revealed two things.

First, frogs sing for a purpose. The peepers’ song serves almost like a puffy profile on a dating website: “Here I am! I’m big! My genes are excellent.” When a female hears this call from her species, she’ll hop or swim in that direction. When the male senses a female in front of him, he will give her a big long hug from behind, and try to transfer that package of genes. At this point, the female may realize she’s being hugged by the wrong species of frog and she’ll shout a call that says, “Whoops! Wrong Frog. Release me.” Males who suddenly find themselves hugged by another male also have a “Release me” call. If you grab a frog in a suggestive way with your fingers, the croak you’ll hear is “release me.” If you’re a halfway decent frog, you’ll let that one go. Frogs are often confused, but they aren’t boorish.

Secondly, frog songs make an excellent date night soundtrack. We still put the froggy “mix tape” on and sit side by side on the couch, holding hands. After 300 million years, it’s no surprise that frogs have game.

I called the maker of the CD, frog listener Lang Eliott. He started recording frog songs in southern Missouri in the early 1970s using the same kind of massive reel-to-reel tape recorder that Nixon used for the Watergate tapes. Since then, recording equipment has gotten much smaller, but Elliot has continued to stand up to his neck in swamps both warm and cold to get close to his singers.

Observation is what he does (his master’s thesis was on chipmunk behavior) but observation also possesses him. In 1988, he realized that recording soundscapes of frogs and birds was his calling. “I’m not doing them for scientific or documentary purposes but for their effect on the human psyche. Which is something you get immersed in, hypnotic, relaxing.” He wants listeners to “dissolve” when they put on headphones.

Elliot makes all of his best recordings at night, when there are no planes overhead, no cars in the vicinity, and it’s dark. “It’s a fabulous time to experience in part because you don’t get distracted by seeing. The soundscape is most poignant,” he says. He describes weeks in Florida where he sleeps by day and works in the swamps by night, alone with the sounds. Sometimes, at dusk or at dawn, the birds will sing against the background of the frogs.

The best way to sneak up on a frog, Elliott says, is to avoid getting in the water—frogs sense wavelets. A small frog chorus will immediately get quiet if you come near. (One reason for frog declines is road noise, which discourages frog courtship.) But a really big frog chorus, at the height of breeding season, in an otherwise quiet area, simply cannot be stopped. At that time, you can find specific frogs in the pond by bringing a friend and two flashlights. If you stand at different places and aim your flashlights towards the croak, the spot where your beams cross is where the frog is. Alternatively, you can look for the reflection of their white neck pouch on the water that seems to go in time with the calls.

I asked Elliot if frogs sing in sync. He acknowledged that our brains are always looking for patterns, but explained that frog songs are basically random, though every frog is on a similar rhythmic schedule. In musical terms, they’re not trying to play in unison but they wait the same number of beats between croaks. As a result, they sometimes fall into sync and then fall out again. In addition, some frogs do counter-singing, and some seem to follow each other. Elliot says that if you can sing like a frog you can sometimes get them to follow your lead.

Elliott hasn’t seen signs of the big changes happening with frogs around the world in the mostly eastern frogs he records. Still, climate is having an impact: A study from upstate New York found that the first song of the spring peepers is now 11 days earlier than it was in 1949.

Life as the frog listener has changed Elliot so that his seasonal rhythms skew amphibian. He describes himself as “spring centric.” “I live for it. My mind is planted there.” The spring is the most intense time for him, as he listens as the frogs and birds get louder, “blooming with sound,” and then taper off to the buzz of bugs in the summer. He now sees the entire year as part of spring. “You know what’s a good sign of spring? The first frost.” The first frost starts the winter bird breeding, which leads, inevitably, to spring.

We spend most of our days driving past lovelorn frogs at 65 miles per hour. Spring offers a chance to listen to that great organizing principle of nature—chance: the thin, teeming boundary between the survival of one’s genes and the end of them. In the syncing and separating of the frog symphonies, in their chorus of “pick me” and “release me,” you can hear the combination of randomness and striving that is the history of everything.