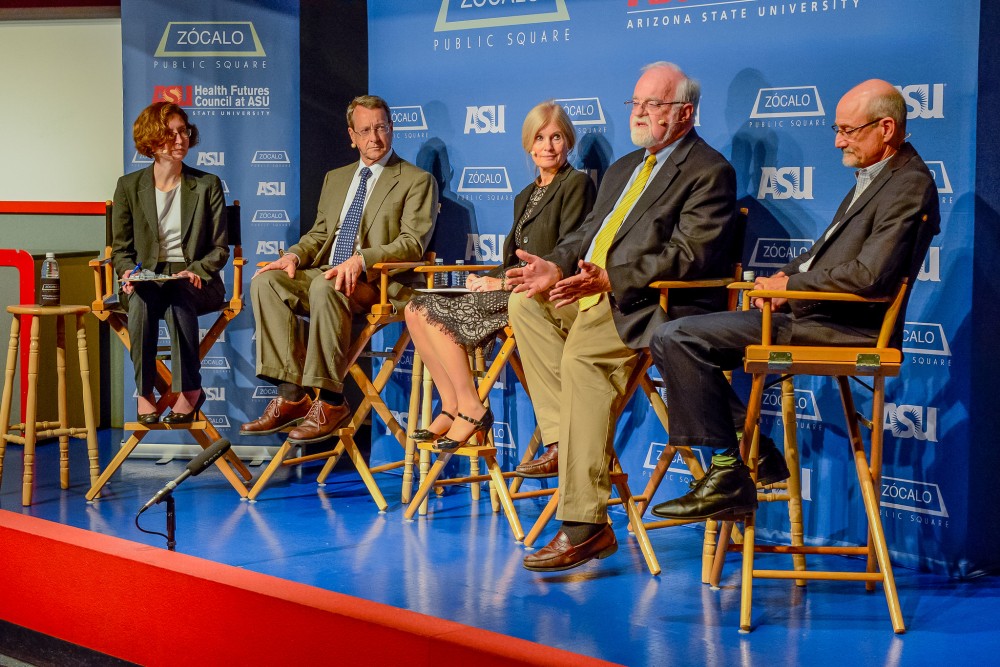 Are the baby boomers going to bust the health care system?

That’s the big question Wall Street Journal reporter Anna Wilde Mathews posed in her opening remarks to a Zócalo/Health Futures Council at Arizona State University event last night, held at the Arizona Science Center in Phoenix. With America’s elderly population on a path to nearly double by 2050—up to 83.7 million—and health costs only rising, the country is charging headfirst toward the biggest strain its health care system has ever seen.

“Will we be able to get the care when we need it?” Mathews, who covers health insurance and policy and moderated the evening’s discussion, asked. “And how much will that cost?”

On hand to tackle this daunting topic were four panelists: ASU economist Marjorie Baldwin, CEO of Arizona Integrated Physicians Keith Dines, executive director of Long-Term Quality Alliance Lawrence Atkins, and CEO of the National Coalition on Health Care John Rother. While they debated what specific kinds of interventions would ensure that future generations have reliable access to care, they fundamentally agreed on the big picture: There’s trouble ahead, and the more we can do today to prepare for the coming challenges, the better we’re going to be able to prevent an all-out crisis.

On one level, some of the largest changes our society needs to embrace are conceptual, the panelists suggested. From carefully reconsidering spending strategies to get more from the dollars that already go into health care (by some estimates, up to 30 percent of the money we spend on health is wasted, Rother pointed out) to reconceiving our relationship with care providers (we need to “look at health care as consumers,” Dines suggested), there’s a lot of work to be done to improve the current system. And seniors can no longer expect for every aspect of care to be paid for. “We can’t afford to have it all,” Baldwin said.

On a nuts-and-bolts level, how would these changes actually happen? How do we ration care, balance deductibles, manage out-of-pocket caps on insurance costs, and reduce the often-devastating expense of long-term care? To address these complexities, Mathews steered the conversation toward three major issues: drug costs, end-of-life care, and payment models for care providers.

On soaring drug prices, Atkins said “the problem is we have a lot of expensive drugs but not the mechanisms to get value from them.” He called this a matter of “opportunistic pricing”: The pharmaceutical industry charges high prices for its products when it can, without regard for the people who are dependent on them, as opposed to making its money from providing much-needed drugs that have the greatest best effects and largest social impact. “We have to get much better at really measuring the value of drugs and pricing them [accordingly],” Atkins said.

Baldwin doesn’t think the drug industry—one “we love to hate”—is the main culprit. She argued that focusing on reducing hospital and physician costs is more important in the overall effort to save money. Even if expensive, Baldwin added that “when drugs keep people out of hospitals, they’re actually lowering the costs of treating specific conditions”

She pointed to Germany and Australia, both of which have imposed price restrictions on their pharmaceutical industries and, in her view, suffered from a lack of innovation as a result. She mentioned one expert’s take: “If you slap price controls [on the pharmaceutical industry], you better like the drugs you have, because you’re not going to get new ones.”

On end-of-life care, Mathews pointed out that a disproportionate amount of Medicare spending comes at the very final stages of life, when expensive technology is used to try to prolong life—though not necessarily at the will of everyone involved in medical decisions, including the person suffering. As Dines explained, “up to 50 percent of health care expenses are spent in the last nine months of a patient’s life, and often interventions expedite end of life instead of expand it.”

The topic is so challenging, he continued, because for decades death has been taboo. Many active physicians were never trained in how to discuss end-of-life options with patients, so people aren’t aware of palliative care and other ways to deal with dying besides fighting it with all technology available, regardless of cost—both economic and in terms of quality of life.

Payment models for providers are perhaps the most complex challenge of all. “Data shows that how you pay providers affects the quality of care they give,” Mathews said. The Centers for Medicare and Medicaid Services have been looking for ways to improve how doctors are paid, so how can we best incentivize quality care?

The panelists talked about the benefits and shortcomings of different models, most notably “capitation,” in which doctors are paid a set amount of money to provide all the care for certain patients, regardless of how many procedures these patients receive. No one system is perfect, they agreed—which makes any route a challenge, especially when it comes to finding actual ways to measure the quality of care provided.

In a lively question-and-answer session following the discussion, the panelists tackled the arguably larger issue of how to convince people to live healthier lifestyles so that care isn’t so direly needed and expensive in the first place. “We’ve been talking about health care as if the medical system is the answer,” Rother said, “but if we really wanted to change things and drive down costs, we need to be talking about population health”—issues like smoking, drinking, lack of exercise, and other unhealthy habits weighing Americans down both physically and financially.

On this topic, the four panelists agreed that doctors, hospitals, and government can’t solve our health problems alone. In addition to institutional innovation, everyday Americans are going to have to take responsibility for their own health, too, though there was some disagreement over the extent to which insurance pricing should take into account a person’s pre-existing behaviors. The consensus on stage was that Americans wouldn’t accept what could be seen as a punitive approach, but Baldwin noted that it seems to be accepted in other insurance arenas. If you’ve had a number of accidents, for instance, you will likely pay more for your drivers insurance than someone who hasn’t.

If there is good news to report, the panelists agreed it may be the fact that there is a great deal of data-driven experimentation going on that could lead to innovation, some of it driven by the much-maligned Affordable Care Act. But all the answers cannot come from Washington or policymakers, as some of the thorniest issues remain cultural.

“The sooner we do something, the sooner we can fix things,” Baldwin said. “We can make some fundamentally easy fixes now. If we wait, it’s going to be surgery.” 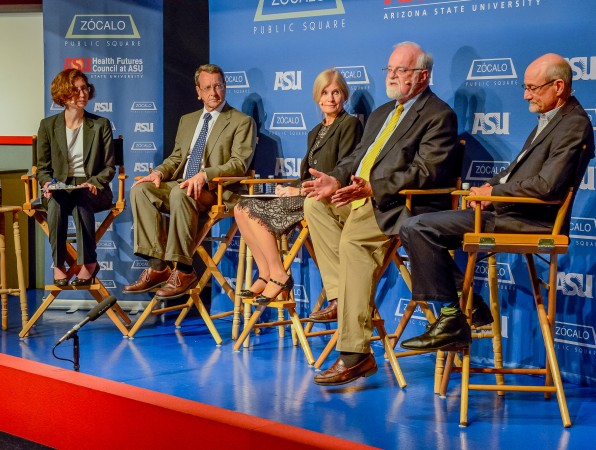 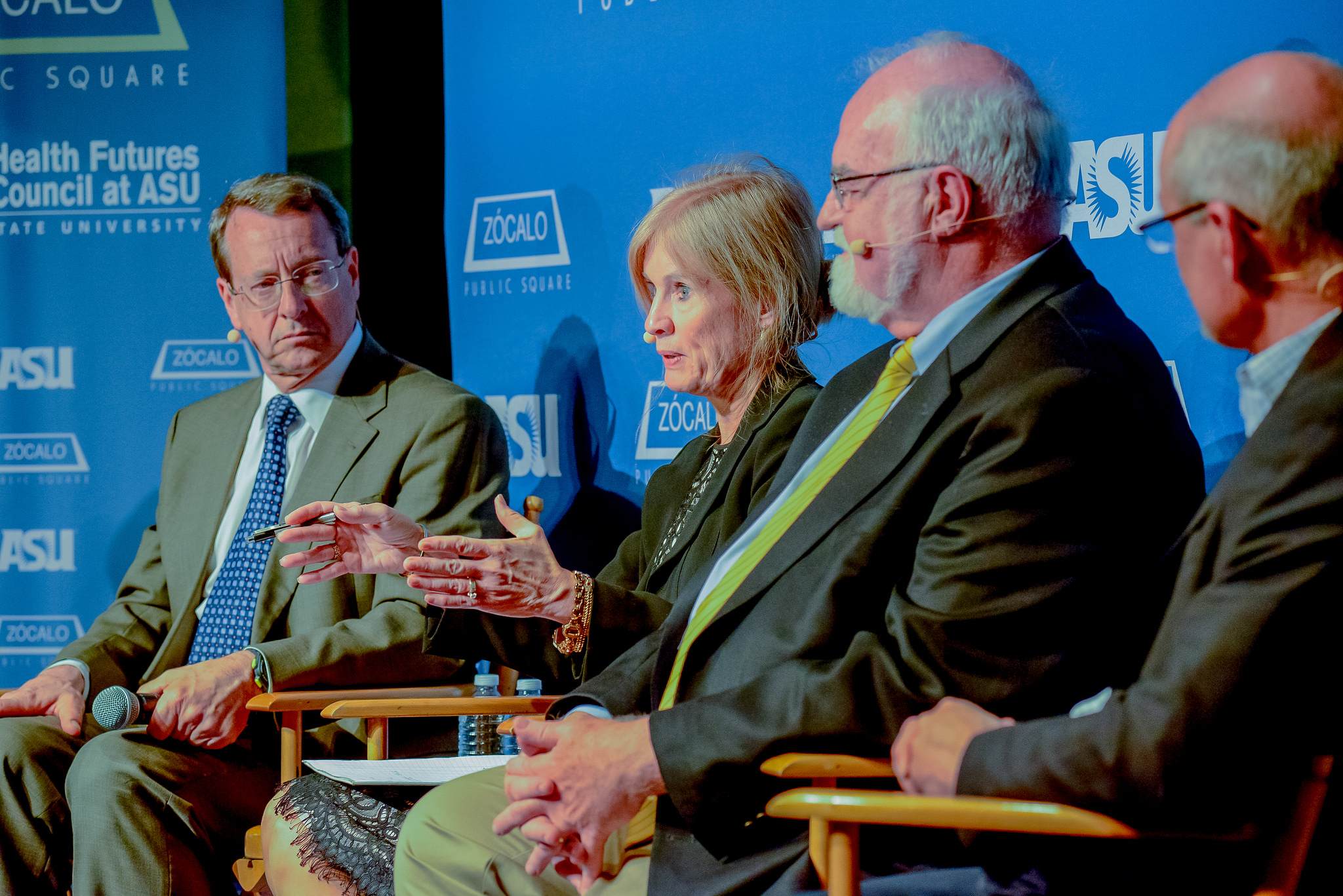 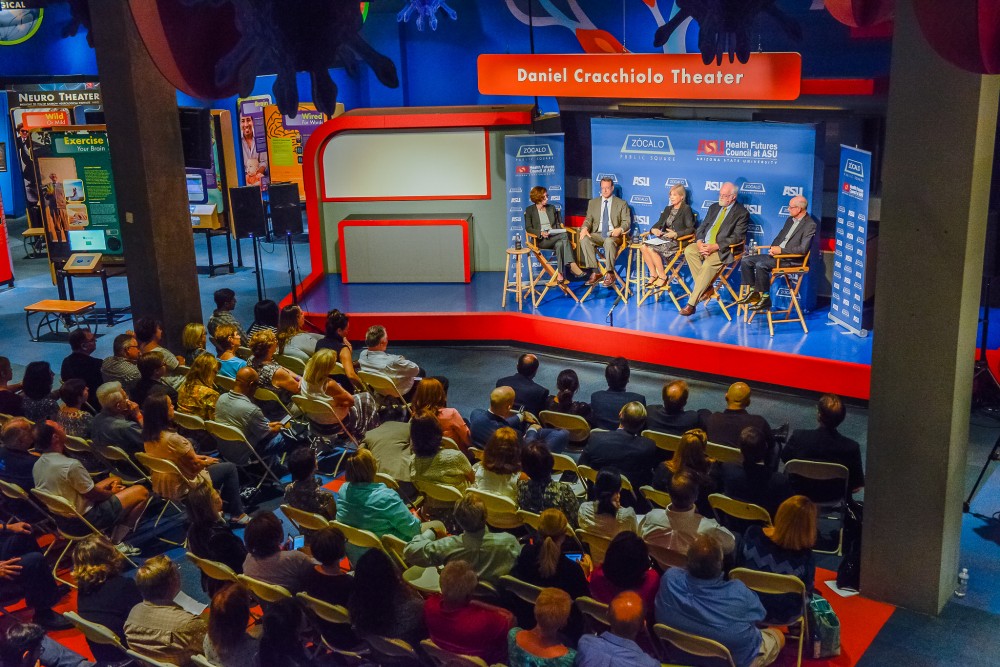 A full house at the Arizona Science Center in Phoenix 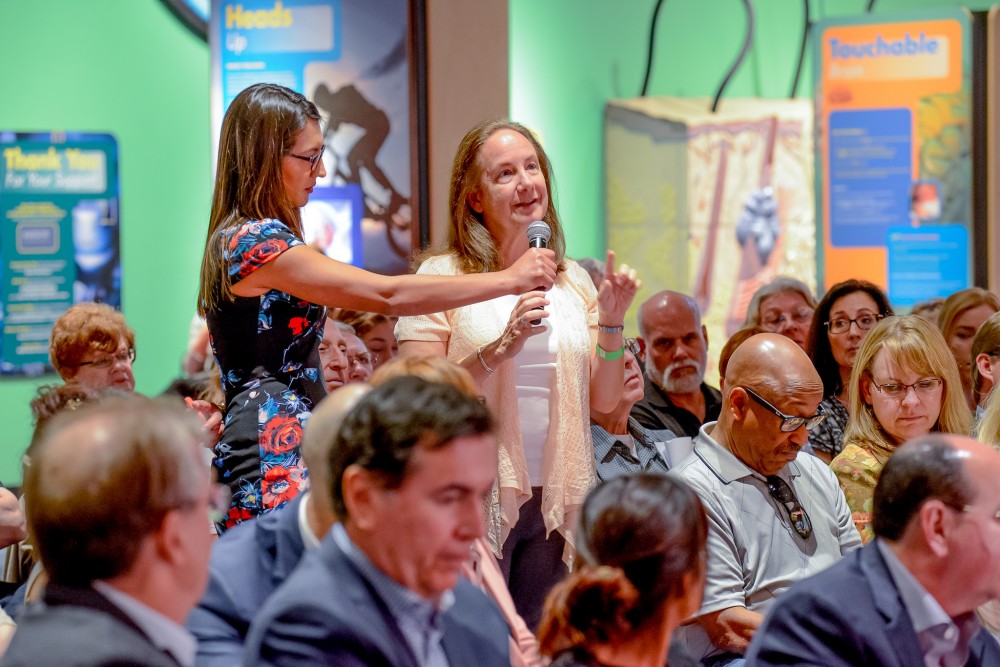 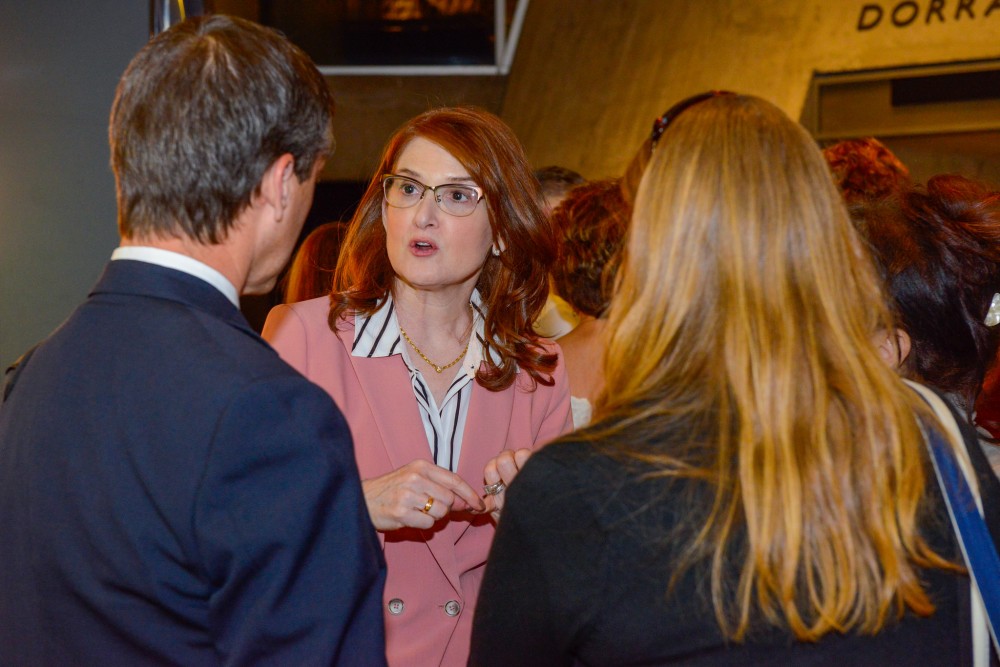 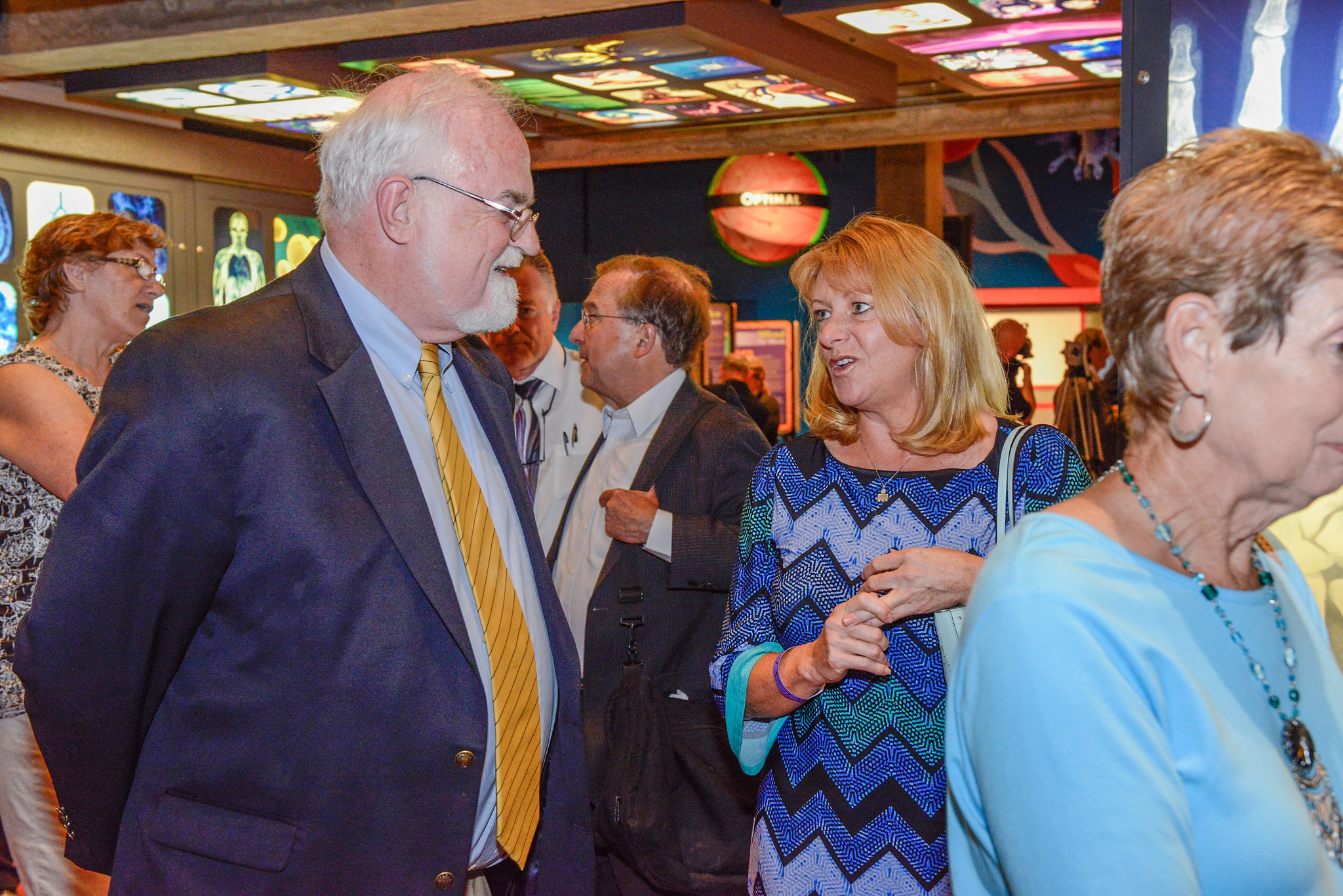 Panelist John Rother, CEO of the National Coalition on Health Care, speaks with guests at the reception