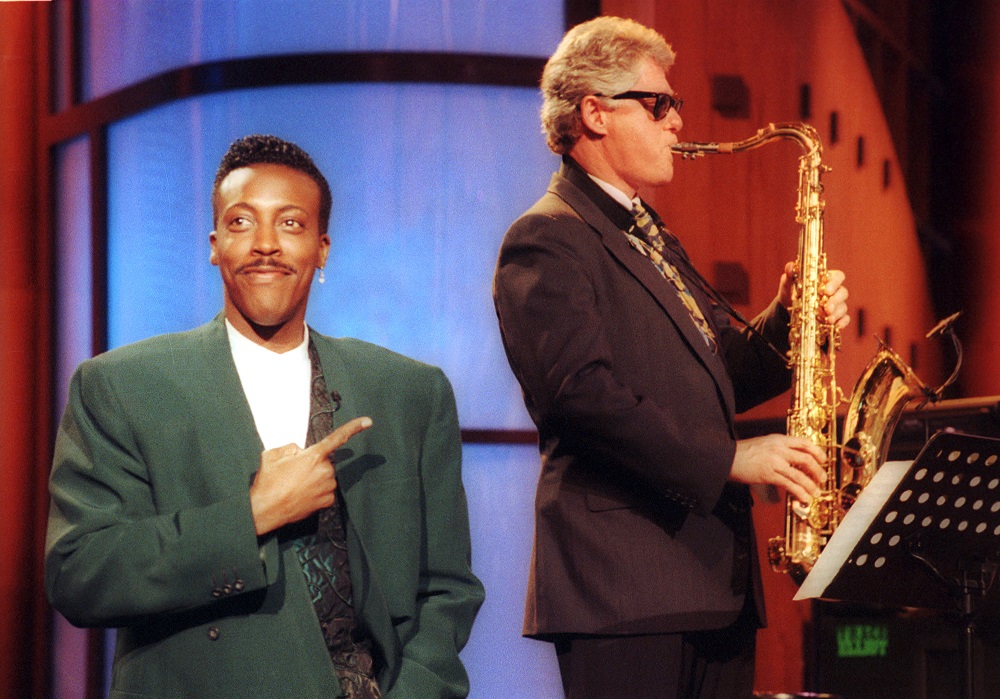 The last decade of the previous millennium is suddenly all the rage, claiming a growing slice of our cultural mindshare. Monica Lewinsky is on the speaking circuit. American cable networks have served up series based on the O.J. Simpson trial and Anita Hill confirmation hearings, as well as remakes of everything from Twin Peaks to the X-Files. And, as we contemplate sending the Clintons back to the White House, the ’90s are framing many of the policy debates underlying this year’s presidential election. Clinton-era economic globalization, anti-crime efforts, welfare reform, and financial deregulation are all on trial this election year.

Nostalgia for the ’90s is triggered by plenty of contemporary prompts, but the trend is also a matter of generational scheduling. We’ve acquired the requisite amount of distance from the decade to allow it to come into focus as a distinct, coherent period of time, the way the 1980s came into focus for us in the last 15 or so years, and the way the “aughts” will in another decade or so. In addition, the children of the ‘90s are now coming into their own as cultural gatekeepers in movie studios and media, able to indulge in and share their personal nostalgia.

More than anything, the ’90s in retrospect were an exuberant interlude between the Cold War and the post-Sept. 11 era. Hardly anyone would dispute that. The debate is over whether you think we wasted this exuberant interlude by indulging in mindless pursuits of no lasting impact, or whether the decade stands, as Bill Clinton asserts, as a consequential time of sound governance, impressive innovation, expanding opportunity, and prosperity.

I am with Clinton in this debate, but it isn’t hard to see the appeal of the counterargument that this was a decade—as Seinfeld, the iconic TV sitcom of the ’90s referred to itself— “about nothing.” The notion is that American society, liberated from the decades-long nuclear standoff with the Soviets, was allowed to exhale, and focus on frivolity. Even in the political realm, the Inquisition of Clinton for his sexual peccadillos (or the peccadillos themselves, if you insist) can be interpreted as an admission that this was a new era of lowered stakes, when politics wasn’t constrained by the exigencies of confronting existential threats.

As a society, we struggled in the ’90s to assess risk, and this was as true in foreign policy as it was in the business world and in politics. The decade that started with much angst about declining American economic power (remember the odd popularity of Paul Kennedy’s history tome on the decline of great powers and worries about how Japan was taking over?) and a stubborn recession would end with strong economic growth and soaring financial markets amidst what then Federal Reserve Chairman Alan Greenspan called “irrational exuberance.”

In foreign policy, the end of the Cold War allowed America to consolidate our capitalist model as the default for the international order. It also made policymakers far more tactical and opportunistic about weighing the costs and benefits of engaging American military power around the world, especially since we were no longer in a global contest with the Soviet Union. We oscillated between being enamored of our sole superpower status and being mindful of our historic reluctance to play global policeman. We were stunned at how easy it was to defeat Saddam Hussein’s army in the first Gulf War, but then chastened by the loss of 18 soldiers in a task force under the Joint Special Operations Command in Somalia. Soon thereafter, we tragically stood by as genocide took place in Rwanda. Later in the decade, somewhat belatedly, we led NATO to destroy ethnic Serbian militarism in the Balkans, but allowed looming threats from non-state terrorist actors to fester elsewhere, like Afghanistan, with fatal consequences in the 2000s. When it came to national security, it was the case-by-case decade.

Many of the institutions and approaches from the ’90s may be under siege in today’s political climate, but their legacy continues to be impressive.

However, the sense that we were no longer stuck in a divided, zero-sum world proved enormously beneficial for cross-border collaboration and economic expansion around the world. The Europeans transformed their common market into a full-blown union, with a shared currency; closer to home, the North American Free Trade Area was born; in Asia, the world’s most populous nation became more integrated into the global economy; and a loose set of governing trading rules became the World Trade Organization.

With nationalism resurgent in 2016, and even well meaning First World elites fetishizing locally sourced everything, I miss the spirit of those days: the recognition that we are all in this together, and the ambition to raise living standards around the world.

Globalization and technology exacerbated inequality within many countries over time. But it’s less often acknowledged that the single most important economic story of the past two decades is the unprecedented decline in dire poverty around the world, and the expansion of a global middle class. Many of the institutions and approaches from the ’90s may be under siege in today’s political climate, but their legacy continues to be impressive.

On the domestic front, too, the ’90s were the opposite of a wasted decade. The U.S. economy registered its longest economic expansion ever, from March 1991 to March 2001, creating nearly 25 million jobs in the period. Americans enjoyed rising wages, low inflation, and accelerating productivity growth, thus almost forgetting about economic cycles and the concept of risk. Uncle Sam benefited from the good times, as government deficits gave way to healthy surpluses. The financial exuberance around the internet’s adoption proved to be irrational in the end, with all the buzzy talk about a “new economy,” but the hype around the transformative power of the new technologies was well deserved.

For Americans living in cities, the decade saw a vast improvement in our physical surroundings as well. I lived in New York in 1990, then mired in the fearful mood captured in Bonfire of the Vanities, Tom Wolfe’s 1987 novel. When I returned near the end of the decade after a stint away, I found Manhattanites as likely to be worried about the Disneyfication of their city as they were about their personal safety. Violent crime in New York declined by more than half in the 1990s, and public spaces throughout the city were reclaimed for public enjoyment. The same was true in cities across the country.

It’s as reasonable to second-guess the decade’s bipartisan anti-crime legislation and strategies as it is to second-guess our embrace of globalization in those years. But the conversation should start with a recognition of how much things improved. Pretending the 1990s were a wasteland of frivolity is a recipe for losing sight of that exuberant decade’s bountiful, lasting legacies.

*An earlier version incorrectly referred to the 18 Americans who died in Somalia as Marines. They were Army soldiers in a task force assembled from several branches of the military.