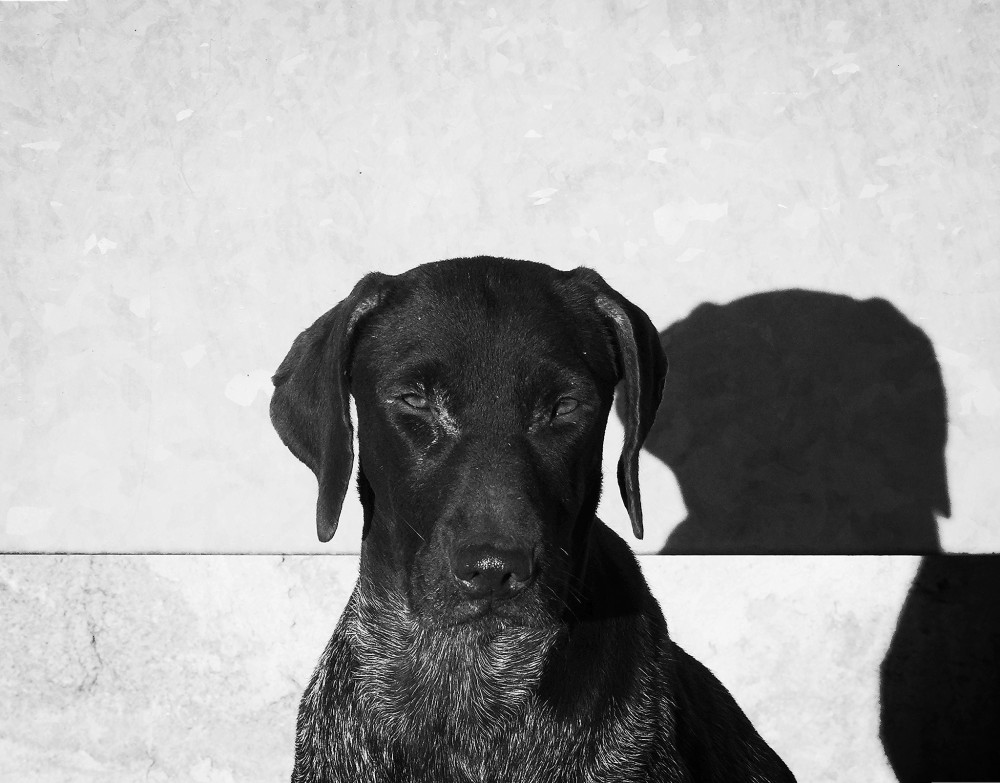 It’s easy to mistake Ozzie as ferocious. His teeth are jagged ivory. His fur is dark as night. But his eyes are the true windows into his soul. Warm, brown, they reveal a kindness that ultimately puts even the wariest houseguest or potential playmate at ease.

Ozzie’s my fourth black dog. Starting with a sweet Labrador mix in childhood, I have nurtured a love affair with dark-coated canines for decades. I’m not alone in this bias; Labrador retrievers are the most popular dog breed, according to the American Kennel Club, and black labs in particular are bred for their intelligence, energy, and protectiveness. My childhood companion, Lena, was a well-mannered black lab/springer spaniel mix who had all of these qualities in abundance. She was a constant companion on road trips, family outings to the park, and even at my father’s office.

Yet if you listen to many animal workers, and many pet owners, you would think my infatuation is unusual. Black animals generally are thought to repel, not attract. Humane shelters report that large black dogs have more trouble finding homes than do other dogs. The phenomenon even has a name: black dog syndrome.

There are practical explanations. Black animals can be frightening. Black animals of all sizes and breeds are harder to photograph in the shadows of a kennel. Their expressions are harder to read due to the lack of facial contrast. But as a psychologist, I’ve studied the phenomenon, and my research suggests that the explanation for this syndrome, if it actually exists, has nothing to do with the nature of the animal. Instead, it’s based in the cultural associations of the color black itself.

Across nations, folklore, literature, and popular culture have long portrayed black animals as undesirable. Black is widely perceived as the color of evil and doom. The Egyptian god of the underworld, Anubis, was depicted as a black dog (or as a man with a dog’s head) to represent the discoloration of a corpse after embalming. In the folklore of the British Isles, a black dog was a ghostly being whose appearance was regarded as a harbinger of death. Perhaps drawing on this cultural metaphor, Sir Arthur Conan Doyle used the image of a black dog as his specter of horror in The Hound of the Baskervilles. The term “black dog” has been used since at least as far back as Samuel Johnson to describe the darkest depths of depression. Black cats also have negative connotations. In the Middle Ages, they were associated with witchcraft, often joining their owners in a fiery death at the stake. In much of the western world, they still are perceived as unlucky. (Although in parts of Asia and the United Kingdom, black cats actually are associated with good luck—except when one crosses an intended path.)

Psychological research confirms these traditional associations. In one study, for instance, the penalty records of National Football League and National Hockey League teams with black uniforms were found to rank near the top of the leagues. Furthermore, people who looked at pictures of these teams consistently dubbed them as more “aggressive” and “bad” than teams wearing lighter colors. These findings suggest that the color black may bias the judgments of referees, and even increase the aggressiveness of players themselves.

Conversely, studies also show that vibrant color, and especially color contrast, is highly appealing. Attractive color has been identified as a critical factor in product purchases in up to 90 percent of impulse buys. Web design research indicates that contrast in color (known as the isolation effect) can visually guide people to click on computer images. Color seems to be an important feature of branding in all fields of marketing, including pets.

But surprisingly, in the case of dogs, these psychological associations actually might not matter. Black dog syndrome, as a psychological phenomenon, is probably nonexistent. Since my early research on the topic, numerous studies have found that the syndrome may simply be an artifact of something called “base rate fallacy.” Due to the dominance of the dark-coat color gene, there are more black dogs and cats than any other color. This preponderance makes it appear that these animals are disproportionately represented in the shelter population. Moreover, contemporary research shows that prejudice against black dogs is not as prevalent as previously thought. In a 2013 study, participants were asked to rate pictures of dogs, colored black or white but otherwise identical, in terms of their perceived personality attributes. The white dog was rated less friendly and more dominant. Several other animal welfare researchers have confirmed that for dogs, coat color is less important to human perceptions of canine temperament than breed or other physical features such as size, ear conformation, facial features, and tail length.

Black cats, on the other hand, are a different story. They’ve been the focus of less empirical study, but research that controls for factors such as sex or age has found that black cats do in fact take longer to adopt from animal shelters than their lighter or multi-colored peers. Despite the fact that black coat color seems to be genetically linked to friendlier disposition and better health in cats, black cats are thought to be more energetic, aloof, and bold than multi-colored or lighter colored felines. And the additional time spent incarcerated contributes to a vicious cycle. The longer cats spend in shelters, the more their health and emotional well-being declines, which makes them even less desirable.

Whether it’s real or not in a technical sense, black dog syndrome still sometimes may have real effects. The simple belief that the phenomenon exists may be leading to something of a self-fulfilling prophecy: People might hesitate to adopt black dogs because of information they barely remember, or information from a less-than-credible source (a common cognitive heuristic called “source monitoring error”). As a result, fewer may be adopted, and the false beliefs may be perpetuated. And the consequences can be deadly. When shelter workers make assumptions about adoptability based on coat color, euthanasia may be disproportionately used to reduce the numbers of shelter animals that are alleged to be unadoptable.

Thankfully, there’s a growing push for us to recognize our misguided assumptions. Last year, one Utah animal shelter embraced what we know about the importance of appearance in product marketing by hiring a photographer to depict its black animals in a series of glamour shots. The aim was to allow the dogs’ personalities shine through their shadowy exteriors. And it worked; potential adoptive families lined up to meet them.

Ozzie, like all my pets, was a rescue animal. He was taken from a foreclosed house where he lived in a rabbit cage for his first three months. At first, Oz was an unsavory-looking companion, scrawny and timid, and my partner and I wavered before committing to adoption. But my love of black labs won, and now he brings our home so much joy. Like the dogs in the Utah animal shelter’s photographs, he is a reminder that first appearances can be deceptive. With pets, like anything else, color is not always an indicator of what lies beneath.