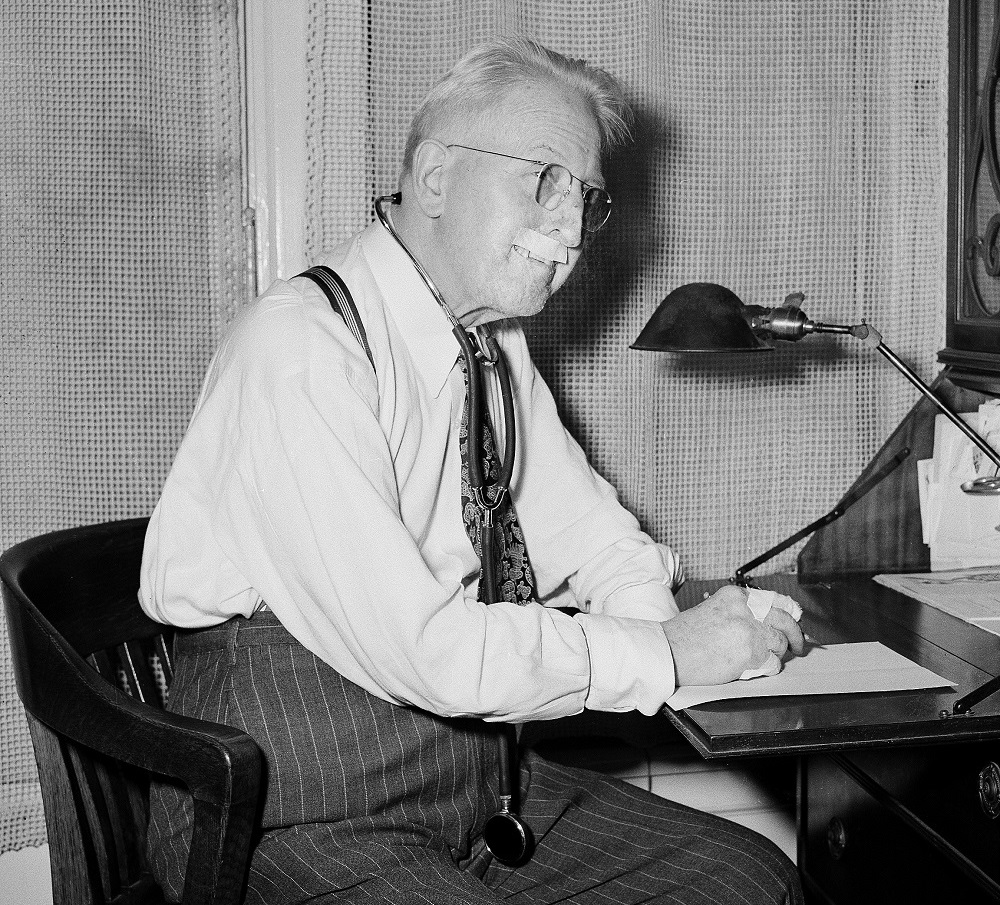 Radiation is a paradox. On the one hand, it’s a lifesaving tool. As powerful energy that can pass through solid matter, it’s often used in medicine for everything from diagnostic X-rays to cancer therapy. But radiation also can be deadly. If handled carelessly, it causes cancer.

No one was better witness to the split personality of radiation than Chicago physician Emil Herman Grubbe, who lived from 1875 to 1960. He was the first to recognize that radiation might cure cancer. But he, like many American innovators, learned it the hard way.

Grubbe ran a small electric light bulb company at the end of the 19th century. At one point, he wanted to expand his business into manufacturing other products. While combing through scientific journals, he came across an instrument called a “Crookes tube”—an electrical device resembling a large light bulb that was used widely by physicists to study the properties of electrons traveling through a vacuum. Grubbe decided to manufacture Crookes tubes to sell to them. 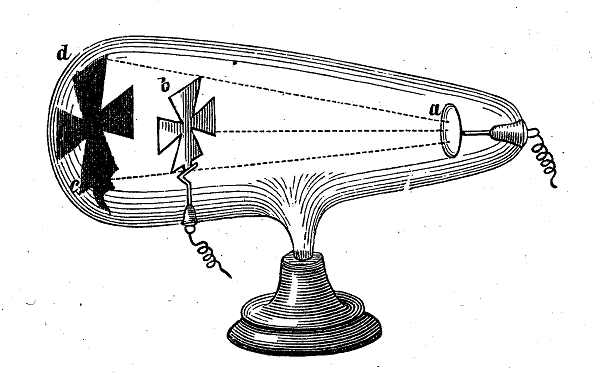 As soon as Grubbe began testing different designs, however, his hands became itchy, swollen, and blistered. At first, he had no idea why, but soon learned that a physicist in Germany, Wilhelm Roentgen, had accidentally discovered that Crookes tubes emit mysterious penetrating rays. Roentgen called these invisible rays “X-rays,” because he didn’t know exactly what they were. Grubbe suspected that it was the X-rays coming from his Crooke’s tubes that caused the burns on his hands.

When Grubbe mentioned this connection to one of his professors at the Hahnemann College of Medicine, where he was studying part-time to become a physician, the professors suggested a novel idea: If X-rays were so damaging to the normal tissue of his hands, they might be effective in destroying diseased tissues such as cancerous tumors. With that remark, on January 27, 1896—just one month after Roentgen’s publication of the discovery of X-rays—the medical field of radiation therapy was born. 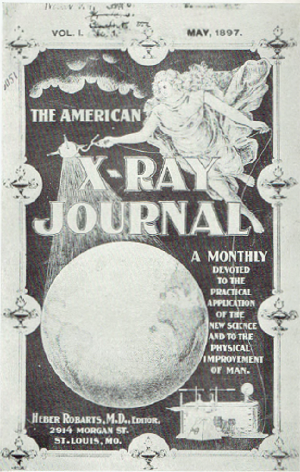 Cover of an 1897 scientific journal devoted to X-ray research

Today heavy regulation requires many stages of preclinical testing before treating patients, but Grubbe boldly tried X-rays on a cancer patient just two days later. Rose Lee, who had advanced breast cancer, was desperate. She had two prior surgeries to remove her tumor, but the cancer kept coming back. On referral from one of Grubbe’s professors, Lee sat for a total of 18 X-ray treatments at the light bulb factory. Grubbe simply positioned the Crookes tube over the tumor and turned on the electric current for a few minutes, with little understanding of what would be the appropriate dose. The treatments did reduce her pain. Nevertheless, she died a month later.

Grubbe was not discouraged. He saw a number of other late-stage patients over the next several years at the light bulb factory. Though most died just like Lee had, he knew that the doctors were referring only their worst cases to him. He hoped that by showing even modest improvement in these end-stage patients, such as reduced pain and slowed tumor growth, doctors might be willing to send him patients with earlier-stage disease, where actual shrinkage of tumors was possible. This is in fact what happened. The doctors soon started sending patents with early-stage disease, and Grubbe started getting remarkable clinical remissions!

To appreciate why Grubbe’s clinical results were considered so remarkable, they need to be put in the context of the time. In 1896, there were virtually no effective medical treatments for most diseases, let alone cancer. Furthermore, there was no understanding of how diseases grew and spread beyond germ theory, which only applied to infectious diseases. On top of this, the American physicians of the day had divided into two warring camps—the allopaths and the homeopaths—each with diametrically opposed philosophies about how disease should be remedied. In other words, it was an extremely confusing time for patients suffering with serious illnesses; it was hard to know who was a huckster and who was actually practicing according to the laws of science.

Grubbe did not understand the mechanism by which X-rays destroyed tumors, but he likely believed that his approach worked because it conformed to the theories of homeopathy, the guiding principle of the medical college he was attending. Whereas allopaths basically believed that what didn’t kill patients made them stronger—leading them to use noxious drugs and aggressive treatments—homeopaths held to the principle that agents which cause specific symptoms in healthy people can be used as treatments for the same symptoms in ill patients. Homeopathy’s principles are wrong, but Grubbe was enjoying success. Ironically, his success was likely because of homeopathy’s second equally flawed principle: The therapeutic benefit of any agent is enhanced through dilution.

Although he never explained his reasoning, Grubbe probably treated his patients with multiple small doses—“fractions”—in keeping with this dilution principle. It was only decades later that scientists discovered why fractionating doses definitely improves radiation therapy outcomes and homeopathy had nothing to do with it. It turns out that tumors are more sensitive to the killing effects of fractionated X-ray doses because normal tissues are better at recovering between the X-ray treatments than tumors are; so the tumor cells are preferentially killed when you spread out the dose over time.

The alleged homeopathic basis for radiation therapy was not the only thing Grubbe was wrong about. He also believed that radiation injuries were completely reversible with time. He downplayed the significance of burns on doctors’ hands and patients’ skin, saying that the burns could be controlled with a little petroleum jelly and that they would eventually disappear. To his credit, he did recommend protecting the normal tissues of his cancer patient by shielding their tissue with lead foil, but he made no recommendations to physicians about shielding themselves during patient irradiations.

Presumably, he also took no precautions to protect himself. By 1929, he had had multiple surgeries for a tumor on his upper lip that severely disfigured him. Over the following years, he had more and more surgeries and multiple amputations. He even removed 15 cancers from his own body by means of electrical cauterization. (It is not clear whether he ever treated himself with radiation.)

During this time, his radiation therapy practice slowly dwindled. It’s likely that his patients had second thoughts about subjecting themselves to his therapy when they saw their grossly disfigured doctor. He retired in 1948, and by 1951, he was so badly disfigured that his landlord asked him to vacate his apartment because his grotesqueness was scaring away tenants. When he died in 1960, his death certificate said he died from pneumonia while harboring multiple skin cancers.

Why Grubbe ignored the dangers of X-rays is a mystery. He must have been aware that other health practitioners were taking precautions. As early as 1898, a Bostonian dentist, William H. Rollins, had designed and widely marketed a metal box with a diaphragm aperture, like a camera shutter, to contain Crookes tubes and thus limit exposure to scattered rays. And in 1901, Rollins’ brother-in-law, the physician Frances H. Williams, discussed specific protective measures in his massively popular volume on X-rays. Rollins and Williams never suffered any radiation injuries.

One likely explanation for Grubbe’s neglect is that his initial success with X-ray treatments may have given him a false confidence about his understanding of the mechanisms of how radiation affects tissues. He was working under a false premise, but his hubris made him bold, not only with regard to his patients’ health but also with his own.

Like many American innovators, he was a flamboyant self-promoter, well known to embellish and exaggerate. But he was also known to lie and he failed to publish his original findings. So his claims of priority in radiation therapy, made many years later, were understandably met with much skepticism. But at least with regard to the essential facts of his initial radiation therapy activities, independent investigation of historical records has largely confirmed his claims.

Grubbe’s story shows how very tempting it is to think we are correct in our ideas simply because the outcomes of our actions have turned out well. We need to recognize that there is always a substantial risk of being right for the wrong reason. And the price we pay for our misguided confidence may be very steep. But we should also appreciate Grubbe’s boldness, which was the key to his success, just as boldness has been essential for many American innovators. It took other physicians decades to ultimately figure out the biological mechanisms that explained Grubbe’s treatment successes. But history hasn’t enshrined their names. Naïveté can be forgiven, but you can’t have innovation without some bravado.