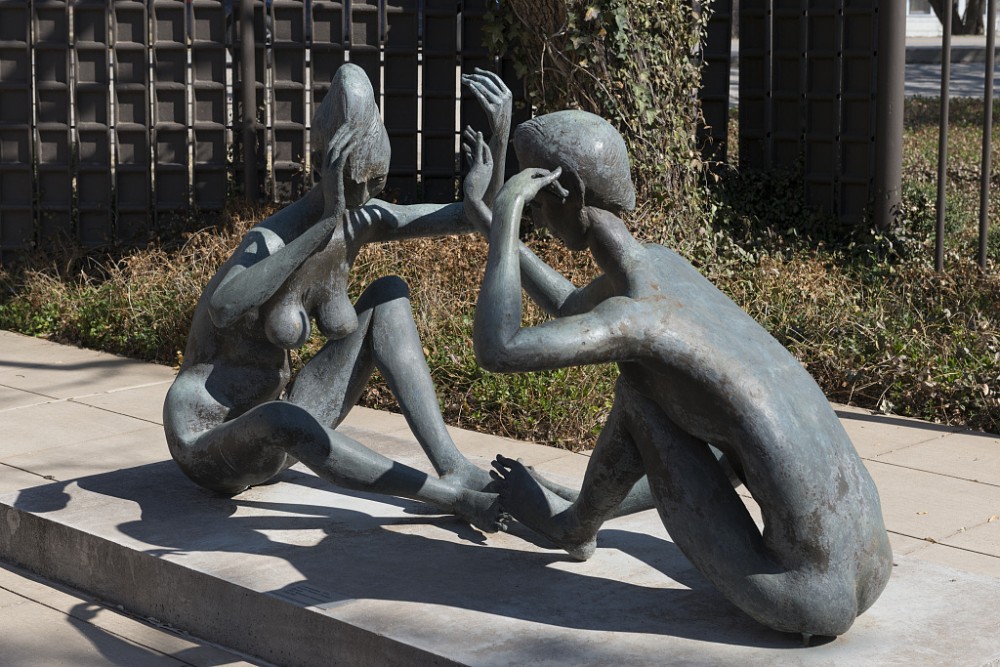 There’s an explosion in demand for non-digital skills

What was once private is now increasingly public

We insulate ourselves in “echo chambers” of agreement

When you’re texting, you don’t have to worry about bad breath

What could be more human than conversation, and what better time than now to converse? The desire to connect is a powerful force, technology a mighty conduit.

Last month, when renowned astrophysicist Stephen Hawking joined Sina Weibo, China’s version of Twitter, he racked up more than 2 million followers in two days. His first post, which appeared in both English and Chinese, read: “In my physical travels, I have only been able to touch the surface of your fascinating history and culture. But now I can communicate with you through social media.”

Yet, as the platforms for communication have multiplied, and with the means to connect now constantly available on our ubiquitous mobile devices, these “connections” can come with a cost: the loss of real-life human interaction. Why meet in person when you can converse on Facebook? Why answer a call when you can send a text? For every Hawking, there are countless hawkers. On social media, marketers of everything from corn chips to cruises invite us to “join the conversation.” But how much actual conversation is taking place?

As a preview for Zocalo’s sixth annual book prize event, “Why We Must Relearn the Art of Conversation,” we asked communications scholars and linguists: How has the emergence of digital technology changed the way we communicate with one another? What are the advantages and disadvantages?

There’s an explosion in demand for non-digital skills

Ironically, the spread of digital technology has prompted a veritable explosion in the demand for non-digital skills. The world has produced a multitude of MBAs and engineers but an undersupply of executives with the essential communication-related soft skills critical for success in the digital age. Turns out that numbers and algorithms aren’t enough. Those who figure out how to identify, hire, and train people with those rare skills will win the race. Those who don’t will lose.

My team from the USC Annenberg School for Communication and Journalism conducted more than three years of detailed research and interviews with C-suite executives. We came away convinced that market leaders know digital technologies have changed the ways we communicate with each other. But they are not sure how to respond. They do know the answers must be unconventional, beyond tech solutions. So while Businessweek has reported that the single most valuable skill that 1,300 corporate recruiters seek in their prospective employees is communication skills, the exact definition of those skills remains too vague and underappreciated. Soft skills are harder to provide than hard skills, and according to McKinsey’s Global Institute, the undersupply of these “interactive” skills is costing four sectors of the American economy between $800 billion and $1 trillion annually.

To close the talent gaps, we have worked diligently to spell out those skills and find ways to nurture them among college, high school, and graduate students, as well as mid-career and senior executives. We are working with a wide range of partners to provide what we call “Third Space Thinking.” These are not the two “hard” skills of engineers or conventional business managers, but the core communication skills of listening, understanding cultural contexts, empathy, adaptability, intellectual curiosity, and 360-degree thinking. Taken together, these essential talents constitute a new way of thinking about the world that complements conventional thinking. Having employees with superior hard skills is an advantage. Having employees with both superior hard skills and amazing soft skills is a super-advantage.

We do not have good language to capture what technology is doing to our society. It is not just about “smartphones,” or the internet, or digital technology. We are connected to everyone in the world, all the time, at virtually zero cost, without filters or intermediaries. I call this trend “radical connectivity.”

We take our phones with us to the bathroom, to the bedroom, and invite interruption. The writer and editor Michael Harris calls it “the end of absence.” Paradoxically, this radical connectivity can make intimacy much, much harder—but it can also connect us remotely to people on the other side of the world.

Ultimately, radical connectivity’s greatest chance may be its impact on institutional power. I believe one of the greatest transfers of power in human history is taking place, from institutions to individuals. If you asked someone in the early ’70s what a computer was, they would describe a machine that would fill your living room. Today, most Americans carry around on their person a digital device that is an order of magnitude or two more powerful than the giant, institutional machines of the 1960s and ’70s.

The personalization of that technology power is manifest in the devolution of our public media (like the decline of newspapers) and the strange circumstances of our political process. There is no “public” any more—only a series of interlocking networks, hosted by a handful of large digital platform companies like Google and Facebook.

Nicco Mele was recently named the director of the Shorenstein Center on Media, Politics, and Public Policy at the Harvard Kennedy School and authored the book The End of the Big. Prior that, he was the Wallis Annenberg chair in journalism at the University of Southern California and the deputy publisher of the Los Angeles Times.

What was once private is now increasingly public

Since the emergence of writing more than 5,000 years ago, technology has helped shape communication. As the means of production evolved (from clay tablets, papyrus, and paper to the printing press), so did our messages and audiences. Tele-technologies (the telegraph, telephone, radio, and television) allowed us to communicate at a distance in real or near-real time. Now networked computers and mobile phones are resetting conversational norms.

Email and texting, along with their social networking cousins, have significantly relegated spoken communication on telephones to second-class citizenship. Where once we picked up the phone (landline or mobile), increasingly we reach for a keyboard or keypad, worrying we might be imposing by calling unannounced. (“Phone” no longer always involves “phonation”—yes, a real word that means “the utterance of sounds through the use of vocal chords.”)

Example: If I want to reach my adult son, I first check Find Friends (a GPS-based system on my mobile) to see if he’s at home. Next I text, asking whether it’s a good time to talk. If the stars align, my phone rings.

These new conversational norms have upended our experience of private versus public communication. In the days of the family landline (or even earlier, party lines), other people might overhear our conversations. Mobile technology makes telephones personal: The calls or messages are just for us. Yet because mobile phones are portable, we often conduct personal conversations in public space. This individual device ends up rendering many private exchanges public. Add in speaker phones, forwarding of messages, and re-postings, and the erosive impact of digital technologies on privacy magnifies.

Naomi S. Baron is professor of linguistics and executive director of the Center for Teaching, Research, and Learning at American University in Washington, D.C. She is the author of Always On: Language in an Online and Mobile World and Words Onscreen: The Fate of Reading in a Digital World.

We insulate ourselves in “echo chambers” of agreement

Digital technology is a blessing and a curse.

The blessing is that it gives us the ability to stay connected with loved ones across the miles. A parent traveling on business can read a book over Skype to a sleepy child at home. Amazing.

But there are pitfalls.

One hazard is that we can filter out voices we don’t want to hear, insulating ourselves in “echo chambers,” connecting only with those with whom we agree. Another hazard is anonymity—online comment sections are littered with unfettered hostility because participants don’t have to own what they say.

We would be wise to remember that digital tools are enhancements, not replacements for the most sophisticated communication tool ever invented: the human body. Emoticons are not emotions; your Facebook page is not your face.

That’s why I’m passionate about our in-person engagement programs like Civil Dialogue, which brings people of all stripes together in the same room, respectfully exchanging views on controversial topics. But we realize that technology is here to stay, so we are also exploring ways to translate the core values of civil in-person communication to civil online communication.

What Edward R. Murrow said about television in 1958 still applies to technology today: “This instrument can teach … illuminate … inspire. But it can do so only to the extent that humans are determined to use it to those ends. Otherwise, it’s nothing but wires and lights in a box.”

Murrow’s “wires and lights” are now microchips, but the challenge remains: It’s not the apps, it’s how we use them that matters.

John Genette is president of The Institute for Civil Dialogue and the civil communication research fellow at the Hugh Downs School of Human Communication at Arizona State University.

When you’re texting, you don’t have to worry about bad breath

Interpersonal interaction has always been artificially enhanced. There is no such thing as unmediated interaction. Many are the media human beings use in face-to-face exchange: clothing and jewelry, make-up and perfume, money and status, gender and race, language and accent, gifts and flowers, letters and pictures, networks and institutions.

Whoever thinks we can go back to some kind of natural or pure communication is not sufficiently acquainted with the natural history of our talkative species.

Giving up the idea of a ground zero of technology-free communication helps us see that any form of communication has its advantages and disadvantages. I’d suggest two crucial changes wrought by digital media.

First, digital media restrict our plurality of self-expression. Erving Goffman, the great sociological theorist of interaction in a pre-digital world, saw everyday life as a drama in which each self could play many roles depending on the situation and context. On a platform such as Facebook, however, one has only a single face among one’s many “friends.” Acting before a crowd requires greater consistency.

The once fashionable idea that the self had as many colors as a chameleon has utterly vanished from academic theorizing. Now we live in a world of “profiles,” a term that two decades ago, as the German media scholar Andreas Bernard has pointed out, was only used for criminals. Forensic techniques—which seek invariance and fixity—now define selves.

Second, digital media remove many risks of face-to-face interaction but put many new ones in their place. Anytime two people meet in the flesh there is risk, danger, and opportunity. What will happen? A handshake or kiss, an exchange or act of violence? One of the biggest daily risks of face-to-face interaction—to stay with Goffman—is embarrassment.

Online or texting, you don’t have to worry if your breath is bad, your hair is combed, or you are doing something else. You are released from the discipline of paying attention in real time. Even a few seconds to think over your response is a performance-enhancing drug: No wonder so many people prefer interacting online!

John Durham Peters teaches media studies at the University of Iowa. His latest book is The Marvelous Clouds: Toward a Philosophy of Elemental Media.