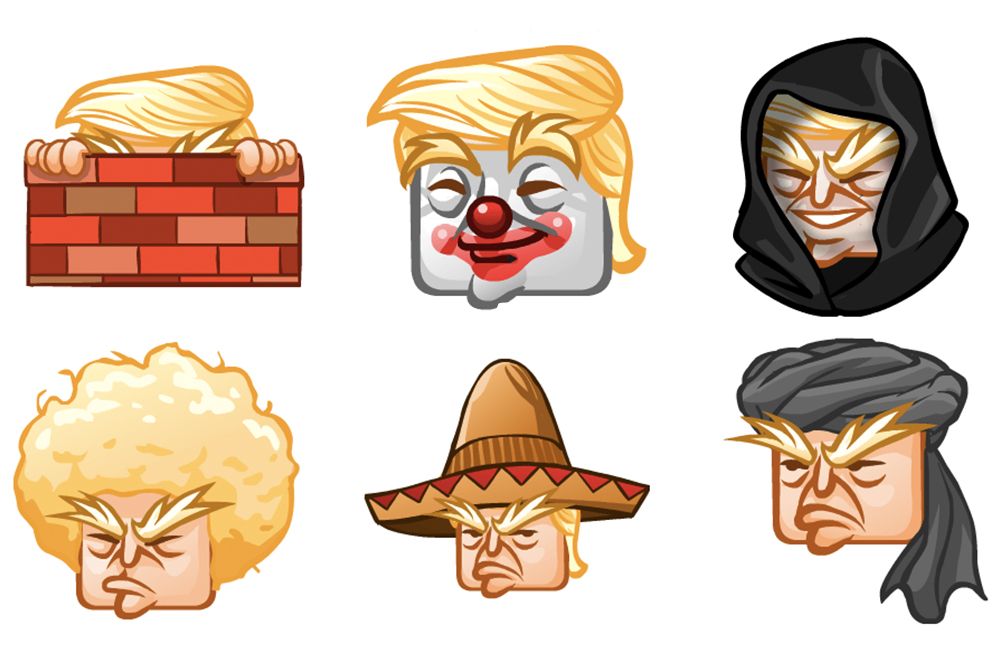 Our four-year presidential cycle is also a four-year satire cycle: Nothing provides fodder for humorists like a presidential campaign. That’s especially true this year. But while all the candidates have been thoroughly mocked, none in living memory has attracted the scale and intensity of the satire unleashed on the presumptive Republican nominee, Donald J. Trump.

Google brings us page after page of Trump cartoons. He was skewered on two raucous South Park episodes, and Trump parodies and imitations appear nearly as regularly as the NBC logo on Saturday Night Live. John Oliver tore into him on his Sunday review. Maureen Dowd, Gail Collins, and other columnists mock him. The Onion thrives on Trump material. The humor website Funny or Die streamed a 50-minute biopic with Johnny Depp in “Donald Trump’s The Art of the Deal.” Satirists in several European countries and Mexico have jumped on the subject with glee.

All these sources agree: Trump is ridiculous, and ludicrously ill-equipped for the presidency. But satire has not stopped him. One enthusiastic critic declared that John Oliver’s show on Trump was an “epic take-down”; but as Australian comedian Ben Pobjie pointed out, it did not take Trump down.

Satire, of course, is hardly the only weapon that has failed to make a difference to Trump’s success. On May 3, he embarrassed those who predicted his downfall when he all but clinched the Republican nomination. But comedians face a particular challenge with Trump: His behavior and proposals are so outlandish as to make it difficult to distinguish satire from reality. The Trump phenomenon confounds political ridicule.

In this, the candidate offers the perfect illustration of just how satire works—and doesn’t. We can see in Trump the three features that define this type of humorous critique.

First, distortion and exaggeration are standard tools of satire. But how to distort the distorted, how to exaggerate the exaggerated? As an Economist writer points out, Trump “already speaks in superlatives and hyperbole. He’s already a walking caricature of himself.” Everything about him is oversized. He is a billionaire with many and various businesses—giant towers, golf courses, casinos, a (defunct) university—all buoyantly marked as TRUMP enterprises. He celebrates his accomplishments with superlatives—“great,” “amazing,” “incredible,” “unbelievable.”

His promises, too, are unbelievably “huge”: He will smash the Islamic State group, bring China and its 1.3 billion people to heel, and spend more on defense while cutting taxes. Also, he will protect Social Security without raising the deficit. Then there is his modest proposal to deport 11 million undocumented immigrants and make the Mexican government pay for a “beautiful” wall across the entire southern border.

Second, satire is an offensive art—impertinent and impolite, sometimes angry and even cruel. But Trump has ventured into areas of verbal cruelty and insult where no satirist would dare to go. Trump declared that John McCain is not a war hero “because he got captured. I like people that weren’t captured, okay?” (This from a man who avoided the Vietnam War by several student deferments and a medical deferment.) Mexican immigrants, Trump said, include many “rapists.” Trump even did a crude imitation of a physically disabled New York Times reporter; responding to criticism by the conservative columnist Charles Krauthammer, who is paralyzed from the waist down, Trump complained: “I get called [names] by a guy who can’t buy a pair of pants.”

His behavior and proposals are so outlandish as to make it difficult to distinguish satire from reality.

Then there are his comments about women. Challenged by Fox News’ Megyn Kelly over past derogatory remarks about women (“fat pig, dogs, slobs, and disgusting animals”) Trump complained of Kelly: “You could see there was blood coming out of her eyes, blood coming out of her whatever” (presumably a reference to Kelly’s menstrual cycle). Defiance of normal social constraints is also evident in his language: He boasted that he would “bomb the shit” out of the Islamic State group and gleefully repeated an assertion from the audience that one of his opponents was a “pussy.”

So in these first two aspects, satire of Trump is self-defeating. But the third and final aspect offers an opening: Political satire directs its vitriol at the danger of concentrated power.

There is more than a whiff of despotism in Trump’s proposed ban on Muslim visits to America, his belated repudiation of David Duke and the KKK, his approval of torture against terrorists, his admiration of Vladimir Putin, and his angry reaction to disrupters at his rallies. (“In the good old days this didn’t used to happen, because they used to treat them very rough.”) Some, noting Trump’s jutting jaw and bellicose statements, saw a comparison to Mussolini. Bill Maher found Trump if not Hitlerian, “at least a little Hitler-adjacent.”

Still, though, satirists cannot touch a strong core of Trump support. If some of his claims and promises are oversized, to supporters they hold the promise of bold solutions. Though many Trump voters are from the working class, they are not put off by the candidate’s vast wealth because it frees him from special interests and super PACs. If some of his statements are a little intemperate, Trump in their view “calls it like he sees it,” articulating anger at the political elites for the loss of decent jobs through benighted trade policies and pandering to racial and ethnic minorities. As for Trump’s raunchy language, which especially troubles evangelical supporters, he promised not to do it any more. Where others fear Trump as a despot, supporters see the kind of leadership needed to “Make America Great Again.”

They laugh not at him, but with him as, in Tweets and at rallies, he mocks rival candidates, the party establishment, Obama, the liberal media, and—his favorite target—“political correctness.”

Yet the very factors that endear him to his supporters alienate him from many others within the Republican party and in the larger electorate. Polls indicate that Trump is the most unpopular major-party presidential candidate on record.

And satirists, meanwhile, have not given up. Trump remains a prime target of ridicule in every medium. The Boston Globe, for example, produced in its Opinion section a parody front page from a Trump presidency. Headlines include “Deportations to Begin,” “Markets Sink as Trade War Looms,” and “New Libel Law Targets ‘Absolute Scum’ in Press.” Trump did not see the joke: “They made up a story… I mean, the whole thing is made up.”

But this was not entirely made up. The story was an extrapolation, with some exaggeration, of what Trump had actually proposed. The question is whether its version provides a useful and witty insight into the reality it parodies. The Globe considered the paper’s fake front page “an exercise in taking a man at his word.”

It could be that his word will change—that he will now act in a less outrageous, more “presidential” manner. But satirists are likely to keep trying to find a way to get Trump. Their strongest warning may be that, in the light of his record thus far, a Donald Trump presidency would transport us into an alternate universe where the distinction between the satire and the reality would be all but completely extinguished.