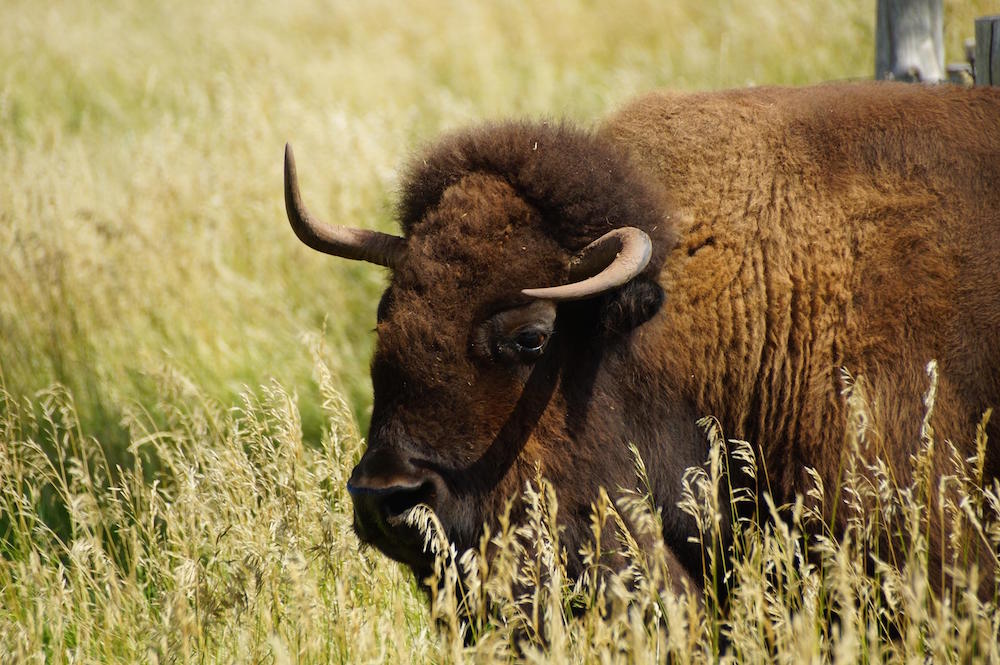 With my wife Jill, I own a herd of 500 buffalo who range across 25,000 acres of western South Dakota. They eat only grass and have the freedom to move many miles every day. They have a very good life. The large predators are all gone and without them our buffalo would soon overpopulate and damage the grasslands if left on their own. There is also the need for us to make a living.

So every year we harvest about 950 animals raised to our criteria—100 of our own buffalo, 150 from conservation groups, about 300 belonging to Native American tribes, and about 400 from private ranchers. Our small, independent meat company, Wild Idea Buffalo Company, turns them into steaks, ribs, jerky, and ground products that we send all over the United States.

You’ll notice that I said “harvest” rather than kill or slaughter. This is partly out of respect for the animals and partly a delicate way of differentiating our intimate operation from the large industrial slaughterhouses. But the term is not really a euphemism because, more like a gardener than most modern livestock growers, we go to the field where the buffalo live and pluck them from the grasslands while they are completely at ease. For us killing is a sacred act—not only for the animals but also for the humans who perform the act—and thus for the people who eventually eat the meat.

During the 1980s and most of the 1990s I raised cattle in the standard industrial model. I had calves every year, separated them from their mothers at about six months of age, and sent them off on trucks to feedlots in Nebraska, where they were fed corn in confinement. The whole process put them through months of panic and stress, causing them to excrete stress hormones like cortisol, which changed the flavor of their meat, and also made them lose weight. The industry views this as an economic problem. I came to view these terrified calves as a moral problem.

After a 15-year stint as a biologist and then meeting Jill, I began to reject the economic paradigm of feedlots and industrial slaughter. My work as a biologist led me to understand that converting healthy grasslands to sterile corn fields was an irresponsible insanity. Hanging around with Jill—a chef who makes Sunday meals in the old tradition and insists on finding sustainably grown food—made me realize that our food system was similarly problematic. Now I cringe to think of all the calves I loaded into semi-trailers and shipped off to ignoble deaths at the industrial slaughterhouses. After fattening on corn, they’d proceed through a production line of chutes and hydraulic conveyors until they reached the stun guns that knocked them out. They were hoisted upside down, bled to death, and immediately disassembled. A Detroit car plant in reverse. Treated like so much rubber and steel rather than living beings.

Slaughter wasn’t always like this. In my youth in rural Ohio it was a community event. I remember somber men splitting carcasses with a hand saw and pigs being butchered on a door laid across the tailgate of a pickup truck. We children would take our turns squatting beside the gut piles, learning the basics of life by poking them with a stick.

Sometime in the 1960s and 70s the process of killing changed. The butchers who work for us say that in the big, efficient, industrial plants, the job becomes monotonous and the workers become callous.

But what was the alternative to industrial slaughterhouses for our buffalo? Once Jill and I decided to change, we had to find a realistic alternative. Government regulations define how we treat, kill, and process animals. Most of these well-intended regulations have to do with cleanliness.

As I combed through the mountain of regulations I found an obscure but promising paragraph that referred to field harvest—killing animals on farms where they were comfortable and unstressed. When I asked our state meat inspectors about this they were willing to listen.

My work as a biologist led me to understand that converting healthy grasslands to sterile corn fields was an irresponsible insanity.

We found a co-op in Washington state that had read the same obscure paragraph in the Meat Inspection Act that I had. They had set up a trailer that satisfied all of the regulations. Jill and I flew out to look at this mobile abattoir and found that the co-op members had already done the hard work of making it regulation compliant. We watched as the customized truck and trailer pulled up at the farm at about the same time the federal meat inspector arrived and the humane slaughter of cows, sheep, and pigs commenced. The next day we were talking to the company that had made the trailer.

Our hopes were soon tempered by the reality of cost: a cool $250,000 for a custom truck and trailer that would meet our needs. That was far beyond our budget but word spread about our nascent plan and a like-minded investor stepped up.

Our version of the mobile harvester was a semi with trailer fitted out for cold Great Plains winters with large tires and heated water lines. Our winches had to be heavy-duty enough to bring a 1,500 pound buffalo into the trailer and get it up onto the skinning cradle. We worked out a low-velocity copper bullet that would just hit hard enough to stun the buffalo without passing through and endangering other buffalo in the herd.

But the mechanics of the slaughter was only half the process: We wanted to make sure that the buffalo never panicked. Before we did our first harvest, we spent thousands of hours learning to move through the herd in a pickup truck, gently, slowly, moving at oblique angles—never rushing. Taking advantage of the naturally docile nature of buffalo, we had to learn to take our time, training ourselves as much as them.

We were coached by an old friend by the name of Rocke Afraid of Hawk. Rocke and I had worked on a ranch together as young men and even then he saw meaning in everything and believed in all sorts of supernatural events. I have never been much for religion and spiritualism but Rocke could make a guy a believer. For the next 40 years we did not see much of each other but we came back together just in time for him to help me understand what the relationship between buffalo and men could be.

On the first day of the buffalo harvest Rocke told me that if he sang and beat on a small buffalo hide drum the buffalo would become even more at ease. I humored Rocke by letting him drum softly from the bed of the pickup. A very skeptical meat inspector rolled his eyes as he sat in the cab beside me. But, when we stopped 30 yards from the herd, a two-year-old bull stepped away from the rest. He turned his head to me and presented an easy, perfect target. He went down with a single shot and none of the other buffalo moved. Rocke was still singing in the back. When the inspector’s eyes caught mine, they were full of surprise. All I could do was shrug and shake my head.

After I backed the pickup into place, we bled the unconscious bull, and then picked the body up with an old hay bale lifter that we’d rebuilt to do the job. “Well,” Rocke said, “I told you.” He spoke matter-of-factly as he pinched a bit of tobacco from his cigarette and sprinkled it into one of the buffalo’s nostrils. “You just got to respect them.”

And then we drove the buffalo over to the mobile harvester where our butchers got to work.

So respect them we do. The men we hired to do the harvesting understood what Rocke was talking about. They turned the job of killing back into the solemn celebration it has been for 99.9% of human history. We’ve been killing that way for 12 years now. We’ve worked out how to run an operation that doesn’t stress the buffalo or the humans, and along the way the buffalo have reconnected us to the sacred. Our harvest crew smudges the rifle, the knives, and themselves with the smoke from a smoldering sage bundle every day before they begin their work. Our meat cutters, office staff, and the folks who make the jerky and smoked meats thank the buffalo for the honest work they have given us. We rest easy knowing we’ve treated our meat like the sacrament that it is.