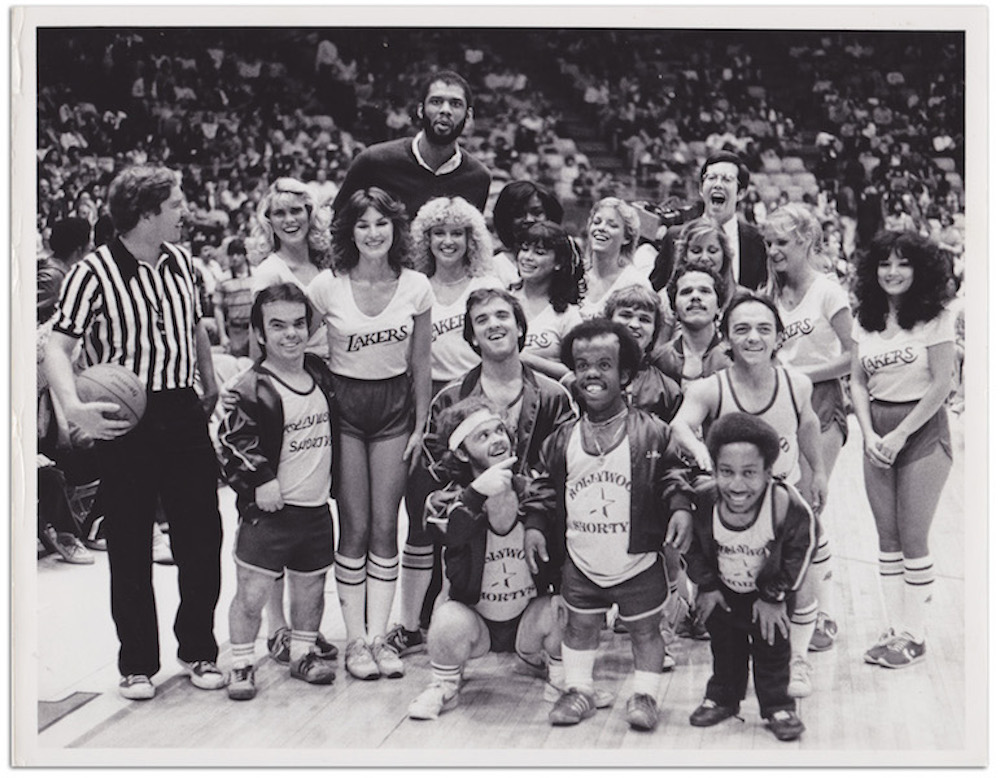 My dad had a saying he would recite when I didn’t want to throw another bullpen session on the backyard mound he had built for me to improve my fastball: “Hard work always has a payday.” I admit, this axiom sounds embarrassingly archaic in the internet age where celebrities are made in mere minutes. That doesn’t mean it’s not true. What follows is a story of a group of guys who worked hard and had their moment in the sun.

The time: December 5, 1982. The place: Los Angeles. The storied Showtime-era, Lakers, coming off an eight-game win streak, were facing the Philadelphia 76ers for the first time since defeating them four games to two in the previous season’s championship series. Kareem Abdul-Jabbar opened up scoring with a signature sky-hook before Dyan Cannon had even reached her seat. It might have been a normal Sunday evening at the Fabulous Forum in Inglewood. But it wasn’t.

Moments after the first-half buzzer had sounded and Magic Johnson & Co. had disappeared into the locker room, the Laker Girls, led by a 19-year-old Paula Abdul, took the floor clad in headbands, tube socks, gym shorts, and T-shirts. Emerging onto the court after them were nine little men in gold basketball uniforms. On their backs were fractions in place of whole numbers, and on their chests in big, blue lettering were the words “HOLLYWOOD SHORTIES.” 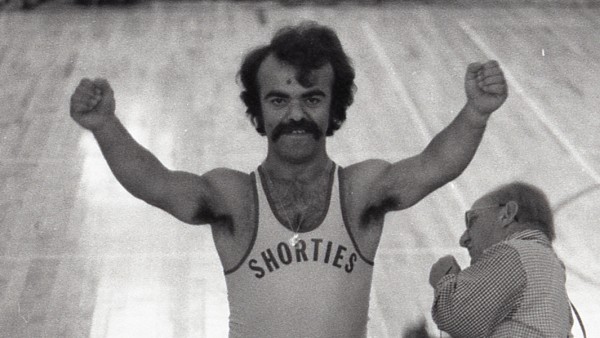 Movies may have paid the bills, but for the Hollywood Shorties, hard work paid off on the court.

The Hollywood Shorties baseball and eventually basketball teams had been founded in 1949 by legendary dwarf entertainers Billy Barty (a renowned character actor) and Jerry Maren (of Lollipop Guild-Wizard of Oz fame) as a rare opportunity for little people to gather publicly. As their athletic skill increased, so did membership and their popularity. By the early 1980s, the Shorties had created a niche in entertainment akin to the Harlem Globetrotters, playing exhibitions from Gladstone High in Covina to the Fabulous Forum with their signature blend of comedy and basketball prowess. 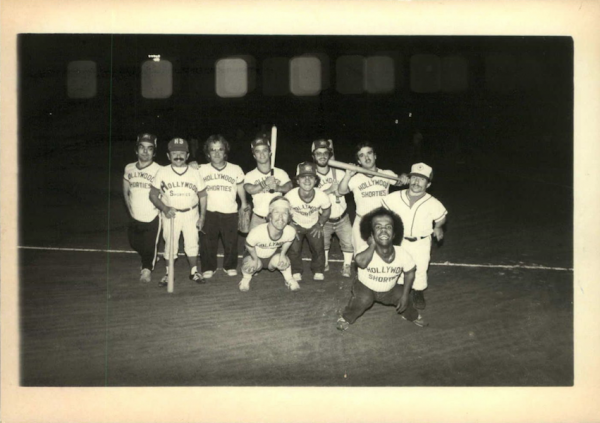 On December 5, 1982, the Shorties’ lineup included rebound king Mike “Pebbles” Gilden, fireplug Kevin “Animal” Thompson, and Adonis-like Chris “Bam-Bam” Romano, who would go on to become the reigning powerlifting champion in the Dwarf Athletic Association of America. But the main attraction was Tony Cox, known simply as “T.C.” At 3’6” his arms barely encompassed the basketball, yet he could hit long-distance three pointers with astounding accuracy.

The Lakers would lose 114-104, but ask anybody who was there and they likely won’t remember that. What the crowd would remember is that at halftime a basketball team of dwarves ran circles around the Laker girls in the wackiest basketball game they had ever seen. But even more than that, those who had the great good fortune to bear witness to that game would remember the shot.

This was not a playoff game. Technically speaking, this was not even an NBA game. This was a five-minute spectacle, an exhibition basketball game between quasi-recognizable dwarf actors and the Laker Girls. This was halftime entertainment of the most frivolous variety, perhaps better suited for a vaudeville stage than a professional basketball arena. But when Tony Cox’s underhanded three-pointer swished through the hoop, none of that mattered.

“Did you see that?!” “How did he do that?!” “Was that underhand?!?!” Laker fans were stunned and thrilled, and let out a roar so loud the Lakers themselves heard it in the locker room. “Who in the world are these guys?”

Who in the world were the Hollywood Shorties? A fair question. The fact that they had been making the scene throughout the Southland for over 30 years at that point had failed to make a strong impression on the general public. Their most widely publicized events had been charity matches versus the moms of Galaxie Little League, or the leaders of the Azusa Chamber of Commerce, or the inmates of the California Rehabilitation Center in Corona, or the student-faculty all stars of Lawndale High—none of which had made them household names. 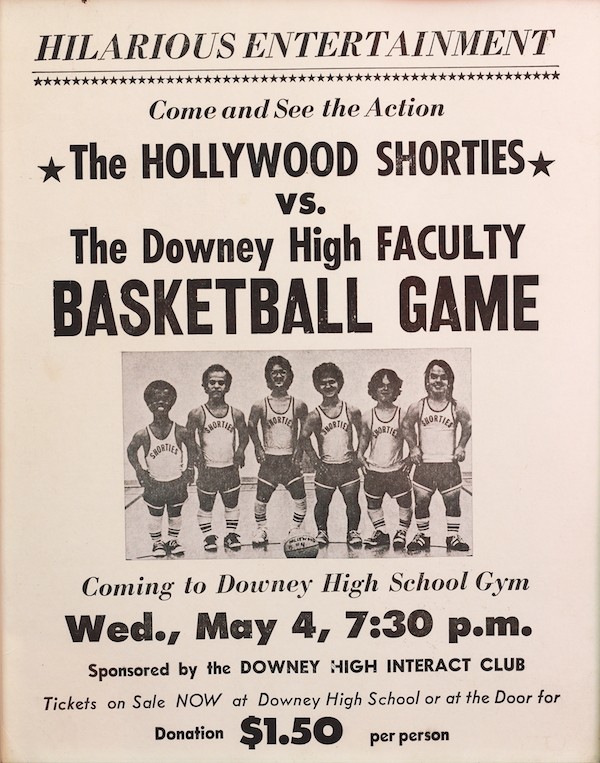 Charity matches against the moms of Galaxie Little League and Azusa Chamber of Commerce didn’t quite make the Shorties a household name.

For anyone, a moment such as the Shorties experienced would be wonderfully exciting. But for a group of little entertainers, who had suffered all the indignities and more of Tinseltown, and when they did book a show were forever hidden behind another monster mask, or elf mask, or leprechaun mask—for these men, the chance to show their natural talent in such a dramatic and public way amounted to nothing less than a mountaintop experience.

More than three decades later, the Hollywood Shorties talk about that day as if it were yesterday. “Ohh, it was just so big,” says Joe Gieb.

A native Texan, Gieb caught the first train to clown college upon graduating high school. After traveling for several years with the circus, he landed in Los Angeles where he was immediately plugged into the dwarf community, which, for an able-bodied young man, inevitably meant the Hollywood Shorties. By 1982, Gieb had played in dozens of basketball games with the Shorties, but of only one of them does he say, “I’m still high on that one.” 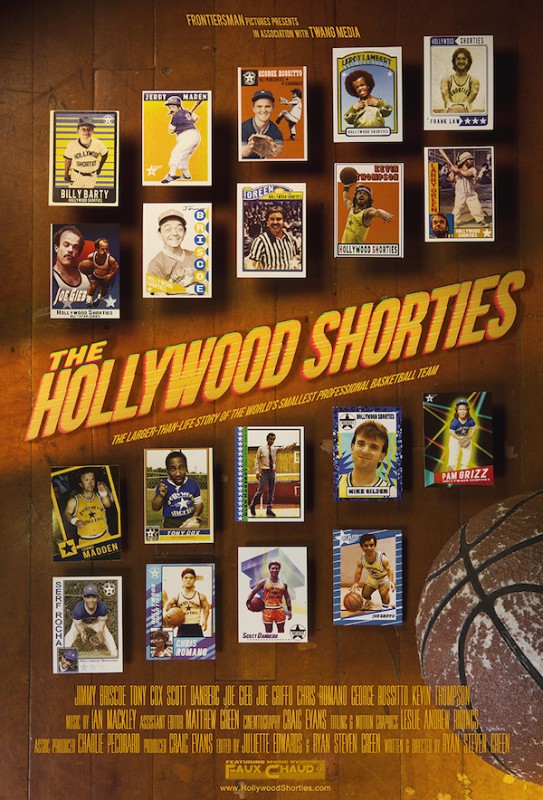 A new documentary on the Hollywood Shorties details the team’s formation, fame and lasting legacy.

George Rossitto was involved with the Shorties from age 8, when he was brought onto the baseball team as a batboy. The son of short stature actor Angelo Rossitto (of Beyond Thunderdome, Master Blaster fame), Rossitto opted for the practicality of a career in aeronautics rather than follow in the footsteps of his father, but he never walked away from the Hollywood Shorties. And in 1976, founder Billy Barty handed over the managerial reigns for the Shorties to George, who immediately named basketball the Shorties’ primary focus.

Playing the Laker Girls was actually George’s idea. In 1982 it was still possible to call the Forum, be connected to the Director of Promotions, and with simple charm and wit land a halftime gig on the biggest stage in the NBA. As George puts it, the experience was, “A high that you couldn’t even think about.”

Today, Tony Cox is remembered more for his turn as a thief in the 2003 dark comedy Bad Santa than for the three pointer that sent the Forum into a frenzy. He shrugs off questions about working with Michael Jackson in Captain E.O., but when asked about hitting that three he can’t contain his smile: “I’ll never forget that moment—that crowd, that noise.”

While The Garbage Pail Kids Movie paid some of the Shorties scale, Under the Rainbow provided weeks of overtime, and Jedi placed Shorties (aka Ewoks) squarely in the annals of cinematic history, each of these can be easily classified under the heading “Right place, right time.” And though it paid them each just pennies, only of that halftime game at the Fabulous Forum might it rightly be said that, “Hard work always has a payday.”

The Shorties would go on to play many games against the Laker Girls throughout the 1980s. Other NBA teams would also provide them a stage, including the Los Angeles Clippers, Sacramento Kings, Golden State Warriors, and Seattle Super Sonics.