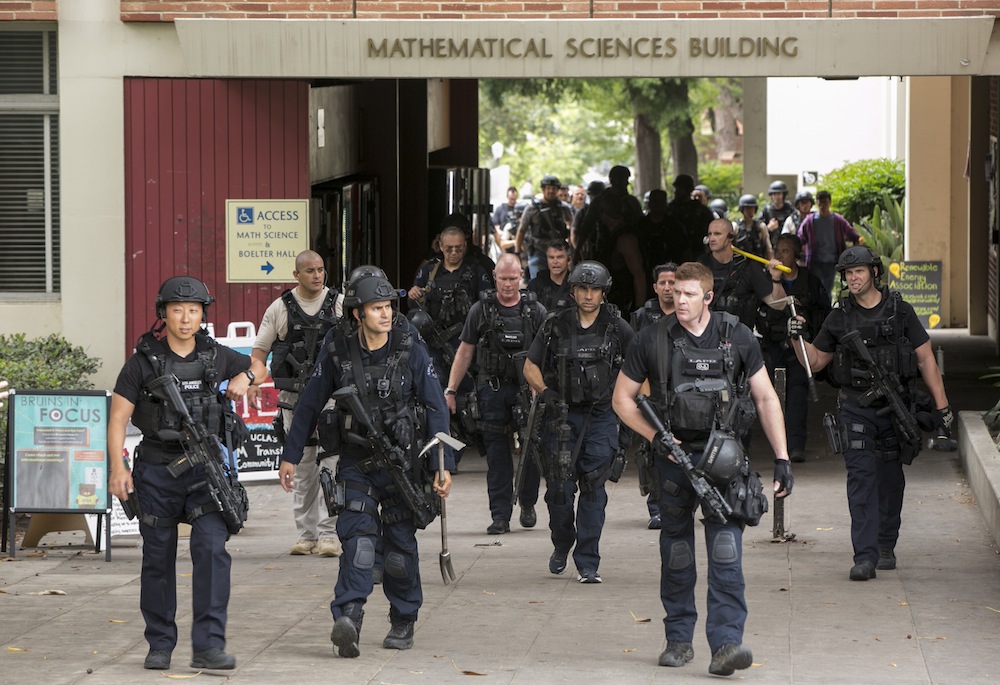 A good part of what was so distressing about this month’s active shooter episode at UCLA was the familiarity of it all.

The death of William Klug, a brilliant and affable young professor, at the hands of a mad former graduate student, was the chief tragedy. But as our campus was taken over June 1 by a veritable army of armed law enforcement personnel in helicopters, police cars, and trucks, I couldn’t help but think: Here we go again.

In a society facing an epidemic of gun violence, universities are, at their best, havens of freedom—sites of the free exchange of ideas, free and open interchange between diverse groups, and free movement across the sovereign campus island. But our freedom is being eroded as we hunker down in preparation for the next burst of deadly fire. Indeed, the vigilance with which we act on our campuses today takes a toll on that exhilarating sense of liberation—from ignorance, bias, and convention—that the university once offered.

I remember well the sad realization I had after Sandy Hook, that it now made sense to introduce active shooter preparation training for the UCLA History Department, of which I served as chair from 2010 to 2015. In 2013, we had our first preparedness session with an officer from the University of California Police Department. The announcement to our faculty, staff, and students noted that:

An “Active Shooter” is defined as a situation where one or more suspects participate in a random or systematic shooting spree, demonstrating intent to continuously harm others.

It’s an unfortunate sign of the times that we need to think this way, but it is very important that we be as prepared as possible for such an event. In that kind of situation, there are specific things we can do to protect ourselves and those around us.

In point of fact, the randomness of these acts constrains our ability to protect ourselves. If we are in the wrong place at the wrong time or are the intended target, there is little to be done. Nonetheless, the active shooter trainer tried to prepare those in attendance for what to do: run from open spaces, closet yourself in your classroom or office, lock the door, turn off the lights, and keep silent.

These are all sensible suggestions. But I was struck, after a second preparedness session, by the indeterminacy of what to do in a situation in which you find yourself in the same room as shooters. The options, as the UCLA Emergency Management webpage tells us, are three-fold: “Stay still and hope they don’t shoot you, run for an exit while zigzaging [sic], or attack the shooter.”

Fortunately, most of us never have and never will have to face that rather harrowing set of choices. In the meantime, we on college campuses usually put this prospect out of our minds. The more vigilant among us may pay increased attention to our immediate environs, locate exits in rooms, or even run through versions of game theory as we contemplate escape scenarios in our minds.

My own sense of vigilance was heightened during the time I served as department chair, especially when I would meet with irate and sometimes disturbed students. I would ask staff colleagues adjacent to me to pay special attention to any abrupt noises. I would also sit relatively close to the students and follow their hand movements in order to be able to act quickly if they took out a weapon.

I chided myself for engaging in this kind of suspicion-ridden activity, for it seemed to violate the basic trust that underlies the teacher-student relationship. And yet, I couldn’t stop myself from going through a mental checklist of preventative measures.

This is our reality now. Of course, we should follow the Australians and set in place tighter regulation of gun ownership. And of course, we should develop far better strategies and devote far more resources to help those with mental illness. These are absolute no-brainers. What more needs to happen to demonstrate their necessity?

Active shooter preparedness sessions are highly imperfect. They reveal that emergency management is an art, not a science. But these sessions are the best we have at present. And it is all the more important to undergo such training in the absence of far-reaching policy changes necessary to reduce the number of shootings.

In the meantime, even as we know that there will be more episodes, we must fight against the understandable impulse to constrain ourselves even further by censoring our words or altogether altering the ways we interact with colleagues and students out of fear. Difficult as it may be, we must endeavor to preserve that essential freedom of mind and movement that propels the university to do its important work for students and society alike.