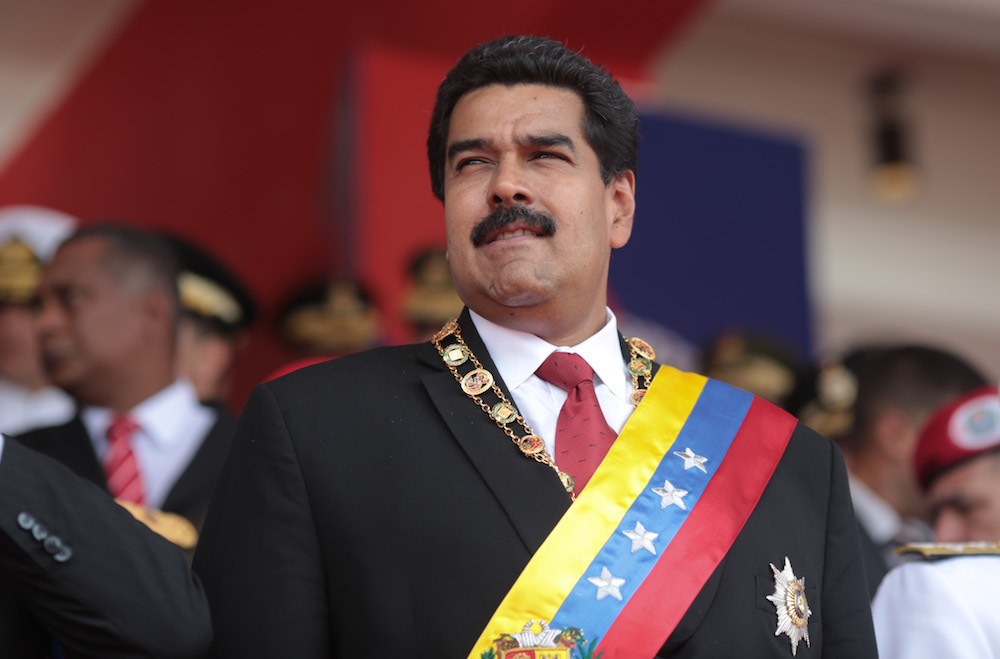 At least on paper, both Europe and the Americas seem equally committed to being democracies-only clubs, willing to defend and preserve the rule of law in member nations. In practice, however, it may be unfair to compare the perplexing web of regional Latin American organizations with the European Union. The juxtaposition of the EU’s recent statement of concern over the rule of law in Poland and the long-overdue response by Latin American and Caribbean governments to the decades-long political crisis festering in Venezuela is a striking case in point.

On June 1, after more than five months of discussion with the Polish government elected in October 2015, the European Commission issued an opinion expressing its concerns over the new conservative government’s packing of the country’s constitutional tribunal and changes to the public broadcasting law.

Compared to Venezuela, which has suffered from a steady two-decade-long erosion of its democratic checks and balances, Poland’s peccadilloes are pretty small stuff. Since his assumption of the presidency in 1999, former president Hugo Chávez and then his handpicked successor Nicolas Maduro (elected with a slim 1.5 percent margin in 2013 after Chávez died from cancer), have diminished democratic institutions, politicized the state, harassed and imprisoned political opponents, and closed down independent media.

In 2004 Chávez and the Chavista-dominated National Assembly expanded the supreme court from 20 to 32 judges, packing it with partisan jurists. Lower courts have suffered the same fate. Opposition mayors and local governments found their funds cut and the creation of parallel pro-Chávez offices showered with resources from the once-flush (back when oil prices were high) federal government. Independent media were shuttered for trumped up reasons or passed to mysterious pro-government owners in inflated buyouts. Independent journalists and political opposition leaders have been harassed and attacked by the government and by state-created private militias, such as La Piedrita, los Tupamaros, Simón Bolívar y Alexis Vive. In 2014, the sexual assault of a university student sparked national protests that led to more than 40 deaths, the arrest of more than 200 opposition politicians and well-documented charges of arbitrary detentions and torture by state security forces.

There appeared a slight ray of hope in December 2015 when the unified opposition bloc—defying a biased electoral system—won what appeared to be a supermajority of two-thirds of the National Assembly.

The hope, though, was short lived. Before the new legislature could be seated, the pro-government electoral commission refused to accept the victories of the deputies from Amazonas province (three of whom were opposition and one Chavista), alleging pre-electoral violations, thus denying the opposition its super majority. And since the new legislature has been sworn in, the reduced opposition majority has seen its bills rejected by the supreme court and the executive branch, including a bill to provide amnesty to political prisoners and one for a presidential recall referendum.

Today, there are more than 100 political prisoners in Venezuelan jails, including one of the leading opposition figures, Leopoldo López, who was indicted for sending “subliminal messages”—yes, you read that right—to supporters allegedly inciting them to violence. López has since been declared a prisoner of conscience by Amnesty International. At the same time, the economy is in shambles, with GDP expected to contract by more than 7 percent this year and inflation expected to hit four digits.

The only constitutional means of resolving the country’s deep polarization and the unpopularity of the government is a recall referendum triggered by 20 percent of voters. Earlier this year, citizens collected several million signatures requesting such a referendum. The effort, though, has been mocked by the president and vice president and the decision of whether to allow citizens to continue to collect more signatures is in the hands of the solidly pro-government electoral commission (the Comision National Electoral—CNE).

Venezuela’s slide into authoritarianism has elicited hardly a collective peep from the region’s many multilateral organizations, almost all of them purporting to defend democracy and human rights. In fact, Latin America and the Caribbean may have the distinction of being the most heavily networked, multilateralized, summit-oriented region in the world. There’s the 70-year-old Organization of American States (OAS) and its Inter-American system of human rights, the Southern Cone Common Market (MERCOSUR), and the more recent creations of the Union of South American Republics (UNASUR) and the Community of Latin American and Caribbean States (CELAC)—all of which count Venezuela as a member, and are supposedly committed to defending and protecting democracy and human rights.

There were two reasons for the muted response to Venezuela’s drift away from democratic rule. First, all of those hemispheric democracy clauses are couched in a traditional respect for national sovereignty and an aversion to intervention in the affairs of other countries. When there were any rumblings of concern over the situation in Venezuela or the need for credible election monitors, Chávez, Maduro, and their allies in the region immediately raised the flag of national sovereignty and accused critics of being interventionists doing the bidding of the gringos. Unfortunately, the long history of U.S. interference in the region and a misstep by the Bush administration to embrace an anti-Chávez coup in 2002 gave the Venezuelan government fertile ground for those fevered conspiracy claims. 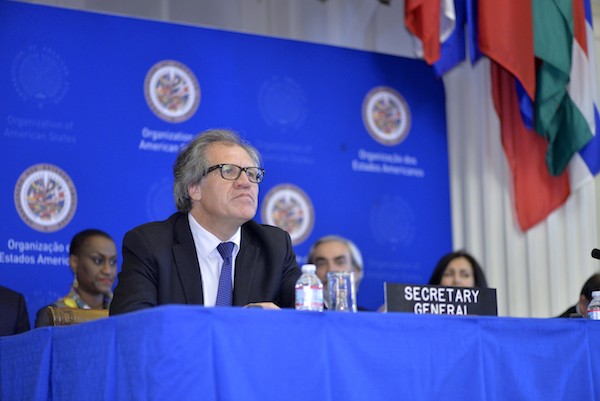 Luis Almagro during his inauguration as OAS Secretary General in 2015.

But it wasn’t always this way. Not long ago the OAS established a series of unambiguous resolutions to safeguard democracy on the continent. The first, Resolution 1080, adopted in 1991, committed the organization to convene its permanent council in the event of an interruption of the constitutional order (read: a coup) for a country’s possible suspension from the organization, and the imposition of sanctions by the other member states. The OAS has acted on this resolution in Haiti (1991), Peru (1992), Guatemala (1993), and Paraguay (1996).

Over time it became clear that the greatest threat to democracy was no longer the old bugaboo of military golpes but the erosion of democracy from within—of elected presidents steamrolling the checks and balances of power, intimidating free media, and shutting out opponents. In response, in 2001 the OAS approved the Democratic Charter, recommitting the regional body to the same steps as Resolution 1080, but this time defining democracy as representative democracy and detailing the set of transgressions, such as an attack on freedoms of the press, that violated representative democracy.

Problem was, the lines are fuzzy, and it has been difficult to determine at what point measures that diminish the independence of media or the judiciary should trigger collective action. The Charter’s target transgressions lacked the clarity of a coup, and the OAS, as a body of presidentially-appointed ambassadors, tends to favor executives. Indeed, until now the Charter has only been invoked in cases of the removal of presidents. This is made all the more difficult by OAS rules and tradition that the body’s decisions need to be made, if not unanimously, then by consensus—meaning that any government that may be sympathetic or tied to a rogue elected president could effectively veto any concerted regional action.

The emergence of leftist governments across the region in the aughts, elected after Chávez in Brazil, Argentina, Chile, Bolivia, and elsewhere on the continent, also added a solid bloc of support for Venezuela’s “Bolivarian” government within the OAS and other multinational bodies. Whether through ideological affinity with Chávez’s self proclaimed 21st Century government or a deep-seated resistance to anything that appeared to be pro-American interventionism, this new crop of left-of-center governments turned a blind eye to the transgressions of the Venezuelan government. At the same time, through an oil-giveaway program to the energy-strapped countries of the Caribbean and Central American, the Venezuelan government has bought for itself a loyal bloc of opponents to any efforts to punish the regime for its autocratic transgressions. The few tepid efforts to raise a debate over human rights violations in Venezuela were effectively stymied by Venezuela’s Caribbean client states and allies, ranging from the Dominican Republic to Saint Kitts and Nevis and Saint Lucia and every country in between in the Caribbean Basin—each of them, by the way with one vote in the Permanent Council giving the bloc 18 votes.

The regional consensus that led to Resolution 1080 and the Democratic Charter has frayed, due to a weak definition of representative democracy, ideological feuds, and greed. Nothing meaningful has ever been done by the OAS to raise concerns about the democratic deterioration in Venezuela.

That is until now. Political changes throughout the region—the election of a conservative president in Argentina eager to redirect his country’s foreign policy away from Caracas and closer to Washington, as well as the crisis within Brazil’s ruling Labor Party—have undercut regional support, and tolerance, for Venezuela’s anti-democratic antics. At the OAS, meanwhile, a more aggressive Secretary General, Uruguay’s former foreign minister Luis Almagro, has also begun to speak out. In the lead up to Venezuela’s 2015 legislative elections, Almagro raised his voice over allegations of voter intimidation and vote-buying. His concerns provoked the usual name-calling by Maduro (who referred to him as “trash”), but helped turn global attention to the pre-electoral violations occurring and may very well have ensured a relatively balanced ensuing electoral process.

The OAS leader hasn’t backed down since. Last month, Almagro complained about the escalation of state violence in Venezuela and the growing possibility that the government was going to thwart the recall referendum. Maduro responded with the usual vitriol, accusing the OAS Secretary General of being an agent of the CIA, provoking from Almagro a surprisingly sharp open letter that not only opened with the direct, undiplomatic statement “I am not a CIA agent,” but also accused Maduro of attempting to deny “the people that [referendum] vote,” making him “just another petty dictator, like so many this hemisphere has had.”

In this public and not-so-diplomatic spat, Almagro exercised his authority under Article 20 of the Democratic Charter to convene the permanent council to consider sanctioning Venezuela for its anti-democratic actions. Almagro, in sharp contrast to his immediate predecessors leading the OAS, had aggressively asserted his power to invoke the Charter. This week, the organization’s Permanent Council will hold a long-overdue discussion on the state of democracy in Venezuela, but any further action will need to overcome the still solid bloc of Venezuela’s allies in the region (such as Bolivia and Ecuador), and the institutional quirk that requires full consensus on any action.

Will regional shifts and the leadership of a clearly strong-willed (and possibly thin-skinned) secretary general be enough to finally force a course reversal to shore up the hemisphere’s collective commitment to democracy, and to do something about Venezuela’s downward spiral? Whatever the outcome of the OAS Permanent Council’s discussions this week, the damage has already been done. Nearly 20 years of Chavismo have left Venezuela on the brink of becoming a failed state, home to one of the worst economies in the world; armed forces deeply involved in narcotics trafficking; federal, state, and local governments effectively gutted; and a deeply polarized population.

Ultimately, it will be Venezuela’s neighbors that will have to deal with the inevitable chaotic aftermath of this period. But imagine what could have been if they, like the EU’s actions regarding Poland, had started challenging Venezuela early on over its rule-of-law distress signals.

It may or may not be too late to shore up Venezuela’s democracy, but there is still time to renew this hemisphere’s commitment to democratic principles and set limits on flagrantly undemocratic and destabilizing behavior in the future.