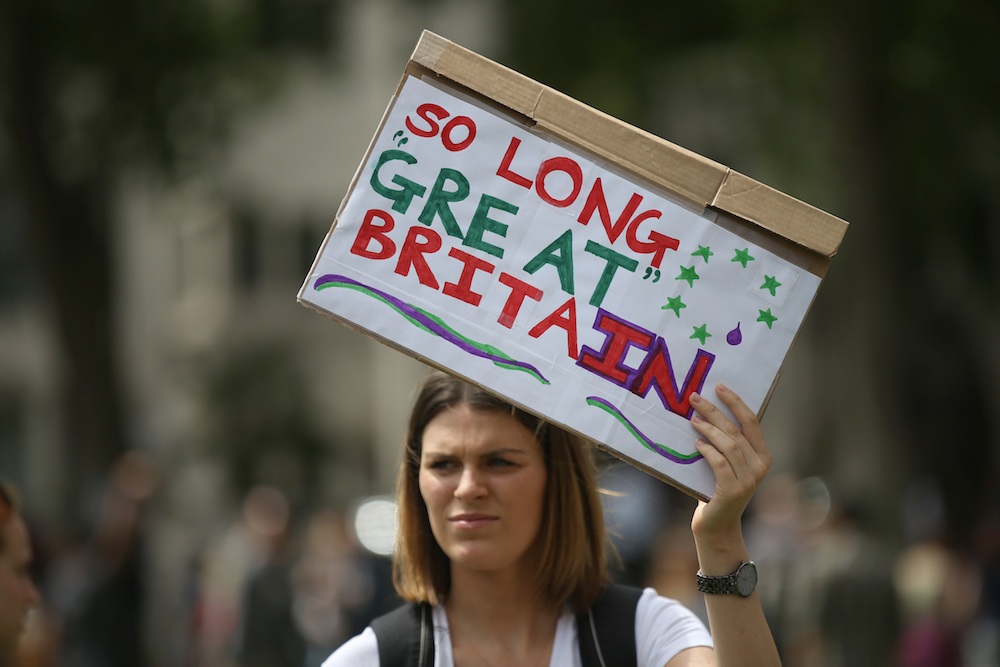 Shortly after the result of Britain’s referendum on the European Union was declared last week, an academic colleague remarked to me, “the final curse of the empire is that the imperial dream is destroying the imperial heartland.”

Britain’s long association with imperialism was a major undercurrent in the campaign to leave the EU. Disregarding the realities spelled out by economists and others as to the impact of a leave vote, the Leave campaign emphasized what Britain might once again become, if freed from what they described as the yoke imposed by the EU. (You could practically hear the strains of “Rule, Britannia!” in the background). The Leave campaign was a potent reminder of how imperial politics have long played out in Britain, the self-declared guardian of individual freedom bent on a civilizing imperial mission in the rest of the world.

The U.K. Independence Party’s notorious poster showing long lines of migrants allegedly clamoring to enter the country conjured a mythic colonizing era: a time when Britain controlled the regions from which today’s would-be migrants have fled, when Britain “ruled the waves,” when Britain truly was “Great.” That the migrant worker in the U.K. does the jobs that these voters don’t want and won’t do was lost in the dream of imperial greatness.

But what, realistically, would a return to empire look like almost two decades into the 21st century? After all, it’s obvious there can be no return to imperial conquest or dominance for Britain. But the Brexit dream worked precisely because it was steeped in nostalgia and regret for a past that many ‘Leavers’ believe should never have been abandoned in the first place. 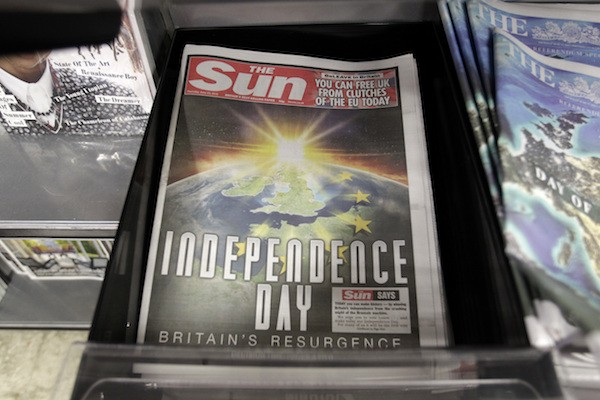 The front page of the Sun newspaper reporting on the EU referendum on a news stand in London on June 23.

The Leave campaign’s appeal to patriotic imperialism was inevitable; it has long been used by those in power to rein in a fractious working class, and to conjure associations with white skin and nationalism. National pride in Britain has repeatedly rested on misty remembrances of the glory days of empire, a vision already riven with the easy racism now rapidly re-emerging in an impossibly divided Britain. With a vote as close as we saw in the referendum (52 percent leave, 48 percent remain), the substantial divides in British society can only get worse.

Britain’s relationship to the EU itself—and its predecessor, the European Common Market— is rooted in its own imperial legacy. After initially opting not to join the EU in the late 1950s, Britain changed its mind and launched what became an increasingly desperate campaign to gain entry. The French leader Charles de Gaulle twice vetoed Britain’s application (in 1961 and again in 1967) for membership, largely on the grounds that its principal ties were more imperial than European. And Commonwealth leaders around the world did not look kindly on Britain’s bid for European recognition, fearing that it would diminish Britain’s commitment to trading relations with their countries.

It would be 1973, and after a change in French leadership, before Britain would be granted admission. Two years later, a referendum on whether Britain should continue its association with Europe was met with resounding approval—more than 67 percent, with a turnout approaching 65 percent.

The 1975 referendum took place as the empire was disintegrating and the greater part of Britain’s former colonial possessions had been lost. In light of this immense change, Britons overwhelmingly saw Europe as offering, in effect, a realistic alternative to what they understood to be a loss of power, economic prowess, and British dignity.

The reason empire mattered in 2016 is precisely why it didn’t 41 years earlier—remaking Britain in the image of imperial greatness was far more persuasive at a moment when it could be clothed in a nostalgic post-colonial glow than at a time when colonies were disappearing at a clip. 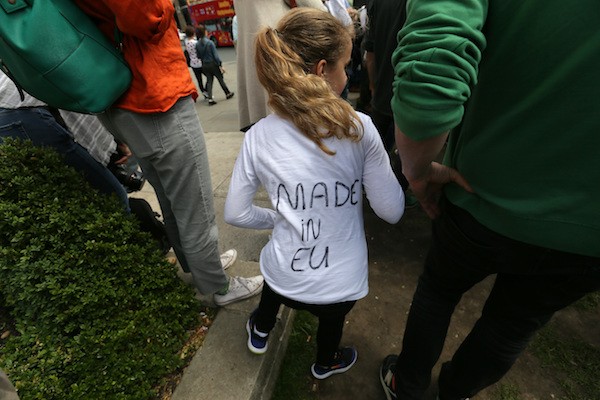 Demonstrators opposing Britain’s exit from the EU hold a protest in London on June 25.

How different were the issues in 1975 from those that have dominated in 2016? The Leave campaign, 41 years ago and now, was an odd mix of far-right and radical left concerns. In 1975, the British Communist Party and the white supremacist National Front, as well as the Scottish National Party and their Welsh counterpart Plaid Cymru, opposed membership as did about a third of Prime Minister Harold Wilson’s cabinet. (Only the radical shift in attitudes among the Scottish National Party, now firmly pro-Europe, has changed much since in this roster of opponents.) Back then, the arguments for leaving Europe were not so different from the arguments heard in recent months: national concerns about the loss of British identity and sovereignty to critiques of an over-weaning capitalist bloc in Europe. In 1975 and again in 2016 the vote was cast in the shadow of de-industrialization, unstable employment outlooks, and a vocal anti-immigration lobby.

Margaret Thatcher, prime minister from 1979 to 1990, began as pro-European but became increasingly unhappy about the direction of the EU. Only two years after she signed the Single European Act, designed to make European laws and policies more uniform, she expressed concern over a European super-state dominating local needs. Her ideas were increasingly rooted in a nostalgic idea of Britain’s former imperial greatness even as she implemented often-ruthless programs of economic modernization. In the campaign she waged in the Falkland Islands off Argentina in 1982, a vision of glorious imperial Britain stamping out foreign despotism and corruption captured the public imagination and helped immensely in securing her re-election in 1983, even against the backdrop of relentless working-class immiseration. With most of the empire now gone, the business of yearning revival could begin in earnest. Under Thatcher, Britons were urged to admire and revive Victorian values and imperial dreams.

Notwithstanding the fact that the Thatcher years saw the final episode in the dismantling of Britain’s once vast empire (the last territories in southern Africa, most of the Caribbean, pockets in the Pacific and, of course, the agreement to return Hong Kong to Chinese rule), this idea of restoring the ‘great’ in Great Britain was, and remains, a potent propaganda move.

Across England the theme heard most often in the past few weeks has been that an independent sovereign Britain could once more be great. Of course, that has been the battle cry of right-wing politicians and demagogues since the early 20th century. It was the message of pro-imperial politicians when Germany’s rise threatened British power in the early 1900s. It was again the message when migration from former colonies became substantial after 1945, giving rise to increasingly draconian immigration laws. And it was at the core of the success of the Leave campaign last week.