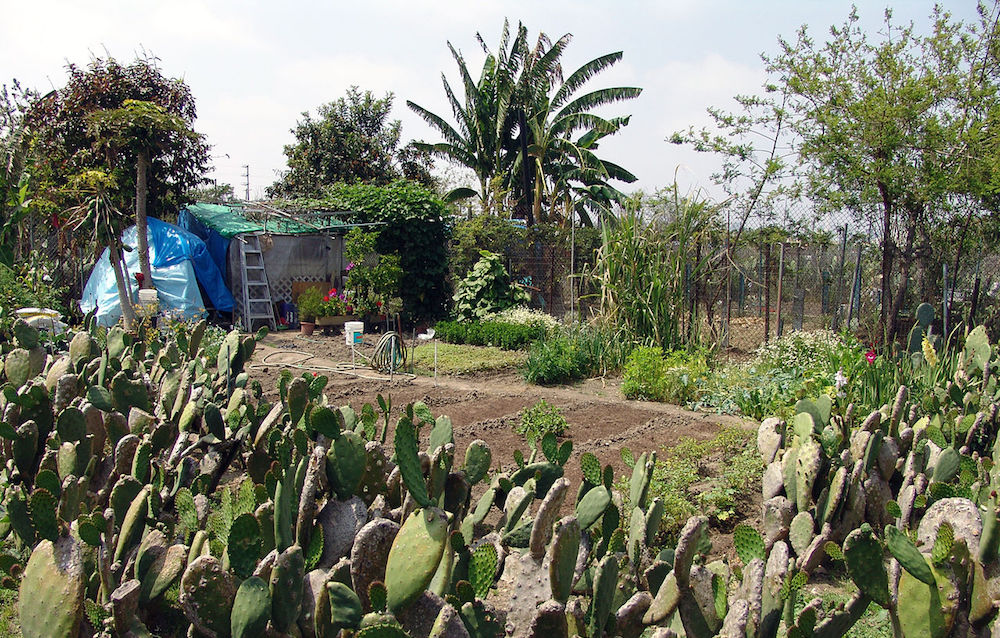 “Hey man, did you ever just lay in the grass and look at a cloud pass?” said Marlon, a physically fit, 30ish African-American man. He was in South L.A.’s Martin Luther King Park with Antar Tichavakunda, a member of a research team from USC who’s working with me on a multi-year study to understand how people use the area’s parks.

“Cloud watching” is not just a data point for researchers like myself, it’s also a critical moment for Marlon, who had recently been “on vacation” (a local euphemism for being in prison) and had come to the park to gather his thoughts. Something about listening to the wind rustle tree leaves and staring at the clouds drew him to the park.

Many civic leaders and organizations are working to make more parks and community gardens in South Los Angeles, but in my sociological research, I’m trying to figure what actually brings people to these places. How do people use these sites to create a sense of place and belonging? What are some of the social benefits?

Los Angeles is said to be the most park-poor big city in the nation. But in reality, there is lots of beautiful open park space here—it’s just located far away from the neighborhoods where it’s needed most. Griffith Park, with over 4,000 acres of natural wilderness areas, hiking trails, shady picnic areas, and recreational facilities, remains distant from the low-income urban neighborhoods where most African Americans and Latinos live. The Santa Monica Mountains National Recreation Area is even more distantly located.

Of particular concern is South Los Angeles, a sprawling metropolis of its own, spanning across 45 square miles, much of it lacking tree canopy and green spaces where local residents may gather.

The City of Los Angeles and L.A. County, aided by non-profits and philanthropic efforts, have been trying to create more parks. Starting with Mayor Antonio Villaraigosa’s plan to add 50 parks and continuing with L.A. County’s current Parks Needs Assessment study, public agencies, sometimes assisted by non-profits and supported with private funding, are making progress—building new parks and improving the infrastructure, especially in poor communities where people of color live.

But what’s going on at the parks and community gardens that already exist in those neighborhoods?

For over a year now my students and I have been going to public parks and community gardens located in Watts, the historic South Central Avenue district, and the Vermont Square-Slauson neighborhoods. For months, we visited at different times of day, and different days of the week, recording our observations. Finally, I selected four sites where we are conducting conversational, audio-recorded interviews with park users and community gardeners.

Los Angeles is said to be the most park-poor big city in the nation. But in reality, there is lots of beautiful open park space here—it’s just located far away from the neighborhoods where it’s needed most.

So far, we’ve found that the men of South L.A. are going to the parks and community gardens, in part, for these meditative, therapeutic moments, for solace and sanctuary, to get healthy, to have fun with friends, and to enjoy close-up encounters with plant nature. We’ve also seen that there are far more men and boys than women and girls using the public parks and the largest community gardens.

Why? First, there’s still a fear factor. In the aftermath of deindustrialization in the 1980s and 1990s, public parks and streets in South LA became violent, dangerous spots. Crime is now down, gang violence has subsided, and today one is much less likely to come across gang fights than in the past. But fear remains. Growing up in South LA, many youth were explicitly instructed by their parents to avoid the parks, and this is especially true for women and girls.

In an ideal world, women and girls would feel free to be here too, but our gardens and parks reflect society, and we have a society where women face sexual harassment and unfair domestic burdens, restricting their activity at parks and community gardens. Many women also don’t think these parks are safe.

In another series of interviews conducted with community residents, a number of women told me they prefer to drive to parks in more affluent neighborhoods to jog, power walk, or take their kids to the playground.

When women and girls do come, it’s typically in the company of children and family. This is an extension of domestic duties—supervising young children on playgrounds, watching kids at soccer or baseball practice, or attending a family picnic. Some of the parks feature recently installed exercise equipment, and you might see a mother and daughter or two friends using the equipment. But the indoor Zumba classes that have proliferated in storefronts and rec centers around South L.A. seem to be more popular alternatives for women’s exercise.

Not only are the parks sites of conviviality and relaxation primarily for men and boys, but the big expansive community gardens in Watts—Stanford Avalon Community Garden and the Greater Watts Community Garden—are also predominantly male. At these sites, there are some women who are very dedicated, talented gardeners, but they are fewer in number, Men over age 55 predominate.

When I ask the male gardeners why there aren’t more women tilling the soil, they say the women are tied up with looking after kids, and cooking and cleaning, or that the women are lazy and don’t want to do the work. It does take substantial time and hard labor to cultivate here. Some of the garden plots span 1,500 square feet, and that takes lots of muscle, dedication, and time to do the work.

Growing food here, he told me, allows him to express his “amor por la tierra,” his “love of the land,” and these quiet moments watering, weeding, or de-thorning nopales bring him peacefulness.

We were surprised to find that men are using these green spaces to create therapeutic moments of tranquility and time for reflection. One Sunday afternoon as I traipsed around Stanford Avalon Community Garden, I noticed Jose, whom I had interviewed several months before, sitting in silence by himself at the back of his plot, eyes-downcast. Now in his 40s, Jose was born in Mexico and started working in L.A. factories full-time at age 14. He now works in construction six days a week. On Sunday he dedicates all day to his garden, where he grows a spectacular array of vegetables including squash, chile, corn, Swiss chard, and strawberries. On this particular afternoon, he had finished with the hard labor of turning soil, and he sat in Zen-like solitude, intently and skillfully de-thorning nopale cactus paddles, preparing these as food gifts for relatives. Growing food here, he told me, allows him to express his “amor por la tierra,” his “love of the land,” and these quiet moments watering, weeding, or de-thorning nopales bring him peacefulness.

Just south of this garden, also below DWP power lines, African-American gardeners, the majority of them men over 60, are growing vegetables from heirloom tomatoes to a wide variety of collard greens, feeding themselves, family, and community members, and finding tranquility and connection in the process. As 63-year-old James explained to me, he enjoys the “freedom of mind,” he finds at the garden. “It’s like yoga, but it’s more physical,” he explained. “It gets me that sanctuary, that freedom of mind and free thought.” He said he takes pleasure in giving away about 95 percent of what he grows.

The public parks and community gardens of South L.A. are also places where men can experience themselves as responsible family men, a claim that can be tenuous for some. At the parks, fathers can take their kids to soccer games, baseball practice, or family picnics, and at the community gardens, they can grow food for their family members. There are many activities t hat draw men and boys together too, including sports, skate parks, drum circles, playing dominoes or cards, or just hanging out and enjoying one another’s company.

The right to congregate in public outdoor spaces in the city has not always been a given for African-American and Latino men in South L.A. neighborhoods. Many have faced danger on the street or police harassment. Relaxing at the park feels like an achievement, both for the individual and the community. The street violence and crime that ruled South L.A. a couple of decades ago has now declined. Sure, there is still danger, and men, especially younger men, need to negotiate threats and turf disputes at the public parks.

Even Crip-controlled parks can serve as healing sites. Charlie, a 55 year-old veteran of violence on mean streets, prison, and military service, found a comfort zone in such a park. “We all started outside,” he said. “I feel like everybody needs to have a space for green. If you can’t breathe, then it’s some place you don’t feel comfortable…That’s what we come out here for.”

Moments of chill and relajo—that’s what the men of South LA are finding in green spaces. This speaks to the power of plant nature, to the therapeutic aspects of being outside, where you can “blow off steam,” inhale fresh air, and touch soil with your hands, or like Marlon, hit the pause button to gaze as a cloud rolls by.

While urban planners, public health officials, and park advocates have publicized the role of parks and community gardens in combatting obesity and diabetes, maybe we also should recognize the parks and community gardens as assets for improving overall mental health and well-being too. After decades of divestment in parks and gardens, the people of South LA need the new and improved green spaces they are starting to get. Everyone does.