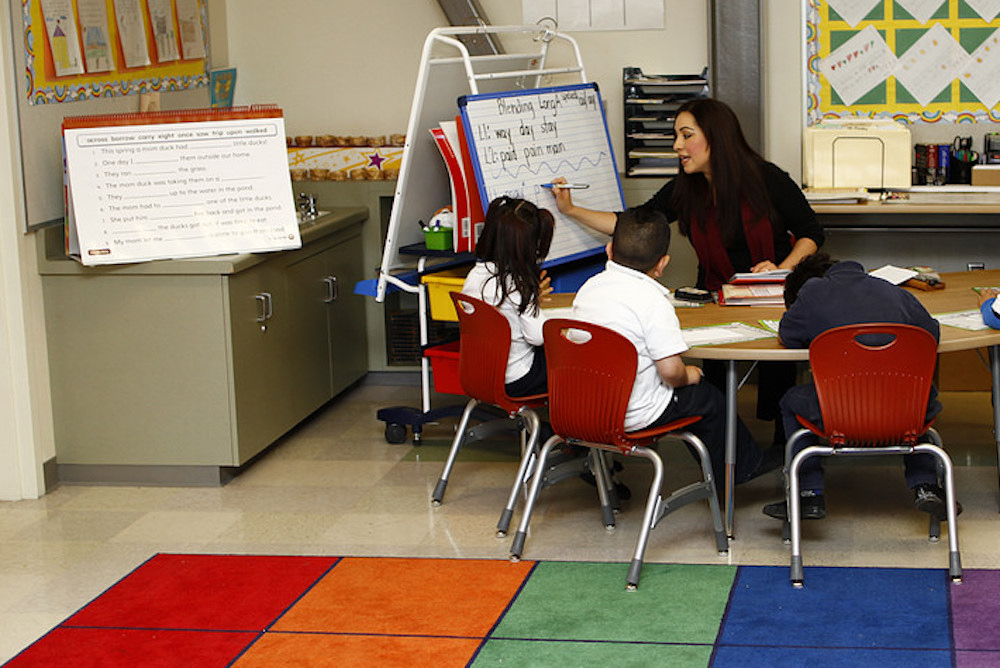 Four years ago, when I was asked to be the summer principal at Florence Griffith Joyner Elementary in Watts, I was nervous about working in South Los Angeles.

I grew up in Lennox, a poor area near LAX Airport that has many of the same obstacles as South L.A., but I grew up thinking, like too many other people, that South Los Angeles was a place to fear. So coming to work quickly proved to be a revelation. I fell in love with the children and families of South L.A. I’ve been working here ever since, most recently as principal at Dolores Huerta Elementary.

Part of the connection I feel to the school is personal; I see myself both in the students and teachers, and I don’t want them to feel the way I did in schools. I was put in an English as a Second Language (ESL) class until sixth grade because my last name is Gutierrez, even though English is my first language. Teachers told me that I would not go to college; I even heard teachers talking about other options for kids like me. When I was growing up, I had no idea that I was part of a failing system.

But in an eighth grade science class, my perspective shifted after I saw Ms. Luz Castillo at the head of the classroom. She was the first Hispanic female teacher I ever had. I thought for sure her parents must be rich. How could she be a teacher? But as the year progressed, I got to know Ms. Castillo better and realized that she had a similar upbringing as my own. She was by no means rich, her parents spoke Spanish, and they were “normal.”

She told me that I was smart. She even gave me an award that year for best science student. It was the first time in my life that I truly believed I could go to college. It turns out it was her first year as a teacher, yet she helped to change my personal reality.

When I became a teacher, I vowed to be just like Ms. Castillo. I was going to tell my students about my journey and convince them that they were just as capable because I was just like them. And I certainly tried to instill that belief in my students.

When I was growing up, I had no idea that I was part of a failing system.

In 2009, I received my first Reduction in Force (RIF) letter—that’s the name for the notice letting you know that you’ve been laid off. That was the teeth of the Great Recession and the state budget crisis, and thousands of teachers, many of them younger teachers like me with less seniority, received similar letters.

I spent the entire summer applying to various schools but I was hoping to be called back to my teaching position at Stevenson—I loved my job and I loved my students. About a week before school started, I was notified that I made it back on the hire list and I could return to my school. But two years later, I wasn’t that lucky. I was RIFed again and I was unable to return to my position.

So I decided to apply for an administrative position. It was a moment of sadness but also of excitement. As much as I didn’t want to leave the classroom and my position as the school’s intervention coordinator (which means working with students who get off-track), I was excited to begin a new chapter where I would have greater impact and influence on our educational system and our students.

As an administrator, I’ve tried to better understand the many needs of students in South L.A. Our students need to focus on their studies every day, but many of them have experienced things— related to violence, health, poverty and trauma—that most adults have not lived through.

I’ve responded to those needs in two ways. The first is by making sure that we have the highest academic expectations for students, so that they don’t fall behind. Those expectations give focus to us and to our students. At the same time, we must provide a very loving and safe environment.

The key to providing such an environment is getting all stakeholders on the same page. Every person who steps foot on campus needs to live and breathe the belief that all children can achieve. I’ve heard people say many times that parents do not want to be involved in their child’s education, but that is far from the truth. Parents here want the best for their children and they want to be involved and support their kids—they just don’t always know how. It really takes a strong school community to bring in parents and provide them with tools to support their children—academically, socially, and emotionally.

At Dolores Huerta Elementary, we do this by hosting a variety of workshops, events, and social gatherings as well as a Parent College led by the Partnership for Los Angeles Schools. Our parents are welcomed to our community as partners—they share the decision making through committees, classroom walks, and open forums. This year we even worked together to better the surrounding community by conducting a day of cleaning in the community, as well as walk-to-school events and some advocacy for safer streets.

Parents here want the best for their children and they want to be involved and support their kids—they just don’t always know how.

Every morning, I personally open the school gate and say, “Hello” and ask, “How are you doing?” to every child. We have 470 students. When I see in their eyes that they’re not having a good morning, it’s my job to pull them aside and ask them if they would like to talk. I reassure them that we all care about them and believe in them and if there is anything they need they can come to us.

On Monday mornings we have an assembly and we always recite our vision, which includes three powerful words: Scholars, leaders, and proactive citizens. It is my goal that all the children are reminded at least once a day that they are scholars, leaders, and proactive citizens, that we believe in them, and that they can achieve personal excellence. I know that this must sound like just rhetoric to most bystanders, but the reality is that those words have to become our truth in every essence of our work to truly reach educational equality.

One of many examples from this year involved a student who had a difficult time the previous year. He was falling behind in his academics and was getting into trouble. This year, we made it a goal to help this student lift his confidence and get back on track. So the parent volunteers in his teacher’s classroom and our out-of-classroom staff made it a point to encourage him all year long. He joined my Google Club (through which I teach coding after school on Fridays through a Google curriculum called CS First) and became a leader on campus. He ended up getting two awards at the end of the school year, one for attendance and another for academics. I am so excited to see what he becomes in the future.

Recently, I hosted my principal’s monthly coffee for all school stakeholders. Since it was the last meeting of the year, we decided to run our meeting a little differently. We ran what we call a Restorative Justice Circle that included parents and staff members; we also held a separate restorative circle with teachers. We reflected on the school year and our work together and our efforts to invite all stakeholders in our journey to student academic achievement. As we went around the circle sharing our funniest, most memorable, and most challenging moments, I became a bit emotional because I felt so proud of our community and how much we have grown.

This year we received our first SBAC scores (Smarter Balance Assessment Consortium—tests that are aligned with the Common Core), and we scored above the district average in mathematics. We have also just received our literacy scores in the district assessments that we take each year, and on average our students increased by three reading levels.

Most importantly, we made progress in our shared goal this year to give students a voice and produce richer discussions and collaborations. When you walk into our classrooms, your hear students discussing their reasoning around their math work and debating the best way to model their solutions. You hear them presenting on the solar system and the significance of the literature they just read. You see the excitement for learning.

Staff, parents, teachers, and community members have stood together for a long time in order for us to be able to say that.

Yet, our children deserve more. They deserve all of us to fight for them, to fight for social justice and educational equality in the school and in South Los Angeles. In the words of Cesar Chavez and our school’s namesake Dolores Huerta, “Si Se Puede!”