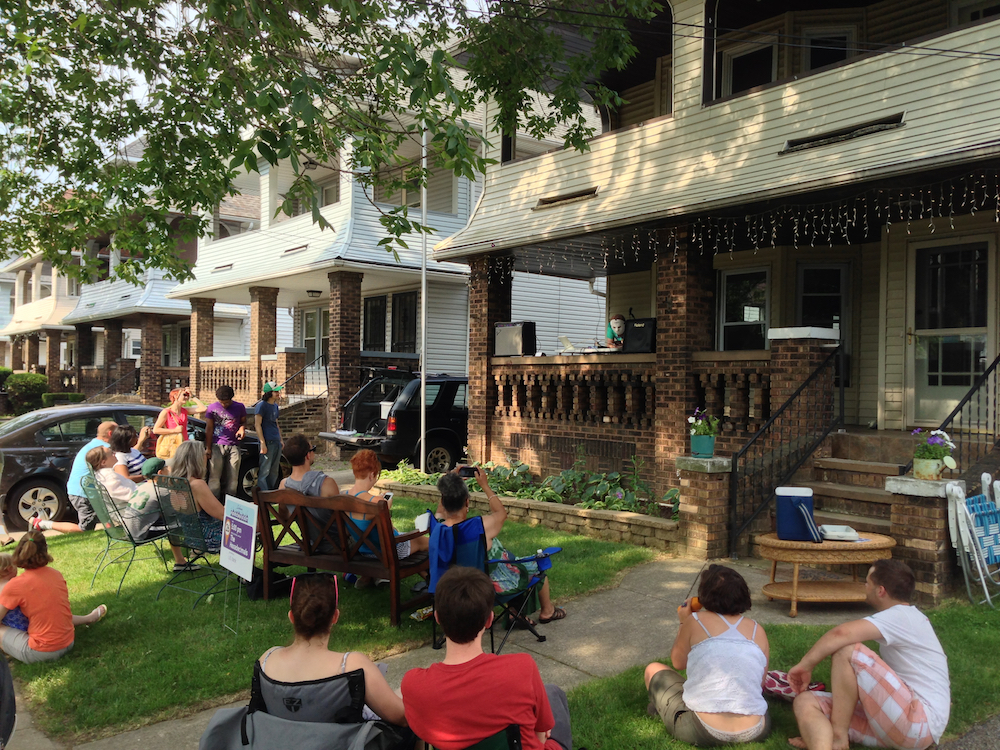 In the middle of February, when the temperatures dip below freezing, Clevelanders are frequently found huddled together for warmth in one place: outside—yes, outside—under the crisp night sky, watching local bands.

Tens of thousands of people flock to Brite Winter, an annual festival featuring six stages of music, DJs, artists, ice carving, and food trucks. The event takes place outside—snow, sleet, or sunshine—in a different Cleveland neighborhood each year, often near some signature piece of Cleveland’s infrastructure. In 2016, Brite Winter popped up underneath the city’s majestic steel bridges on the Flats adjacent to the Cuyahoga River, a once-decaying entertainment destination that’s been revitalized by restaurants, bars, and concert venues.

Brite Winter embodies Clevelanders’ resiliency—a good trait to have when you’re wrangling with four months (or more!) of our winter. It’s also a demonstration of how this city, despite challenges ranging from the climatic to the economic, never stops playing. The city is now small enough that when you go see a show, you’re likely to see someone you know. Music is so unavoidable here, 12 months out of the year, that it’s easy to forget that not every place is like this.

Cleveland’s been a cutting-edge music city for decades. In 1952, local radio DJ Alan Freed threw a concert known as the Moondog Coronation Ball at the Cleveland Arena. This event, which featured then-popular acts such as The Dominoes, Paul Williams and the Hucklebuckers, and Tiny Grimes and His Rocking Highlanders, is considered to be the first rock ‘n’ roll concert.

In the late ’60s, The Velvet Underground played so many gigs in Cleveland they called it their “home away from home.” David Bowie’s first U.S. concert was September 22, 1972, in Cleveland at Music Hall. And both Rush and Bruce Springsteen received career breaks (and boosts) thanks to the support of local rock radio station WMMS. 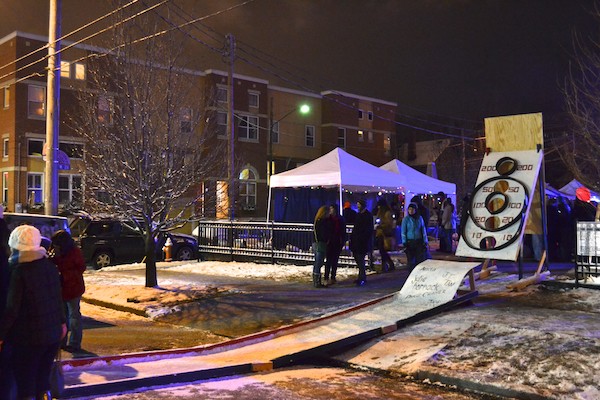 Many influential underground acts have flourished here too. The Outsiders and power-pop aficionados The Raspberries became beloved rock bands in the late ’60s and early ’70s (respectively). Later in the ’70s, proto-punk acts such as Mirrors, Rocket From The Tombs, and The Electric Eels gave way to the mighty noise-rock troupe Pere Ubu and punk band Dead Boys. In the ’80s, evocative post-punks Death Of Samantha and the pop-leaning band The Mice made waves. In the ’90s and beyond, Cleveland’s hardcore scene and hip-hop community spawned various factions and movements that made waves well outside of the city.

Why has so much important music emerged from Cleveland? Residents are unpretentious and can smell insincerity from a mile away—no matter what the genre, if the music’s not genuine, it won’t fly here. Plus, the city’s status as an off-the-beaten-path metropolis, coupled with a low cost of living, lets musicians experiment with impunity. Creativity is both encouraged and applauded.

Accordingly, ingenuity is a hallmark of Cleveland’s music venues, many of which are in historic buildings representative of the city’s grit, heritage, and traditions. The popular Beachland Ballroom was once a social and political gathering place called the Croatian Liberty Home. Today, the two-room venue includes an intimate tavern where the audience can get nose-to-nose with the stage, and a larger ballroom where a disco ball casts a festive glow over shows. The creative space is utilized by national touring acts of all genres as well as local bands. In fact, the tiny tavern hosted early shows from The White Stripes and The Black Keys.

To the west in the funky enclave Lakewood, the old-school bowling alley Mahall’s 20 Lanes has become a mecca for up-and-coming punk, emo, hip-hop, rock and comedy acts. In the venue’s basement, it’s common to see throngs of people thrashing to a rock show right across the hallway from serious bowlers.

Meanwhile, an unpretentious shot-and-a-beer joint called The Happy Dog pairs legendary hot dogs with an eclectic variety of music, like soul and polka DJs and hip, national touring bands. Then there’s the proudly dive club Now That’s Class, which rounds out the West Side music scene with a vegan-friendly menu and shows featuring noise bands, up-and-coming punk and hardcore bands, and renowned legends.

On the east side of town, venerable venues such as The Grog Shop—which has hosted the hippest rock, hip-hop, and punk acts for over two decades—and the sophisticated, jazz-oriented supper club Nighttown add diversity. In and around Downtown, venues such as the House of Blues and waterfront Music Box Supper Club, as well as the legendary rock venue the Cleveland Agora and outdoor riverfront amphitheater Jacobs Pavilion at Nautica, bring out-of-town acts to the city. 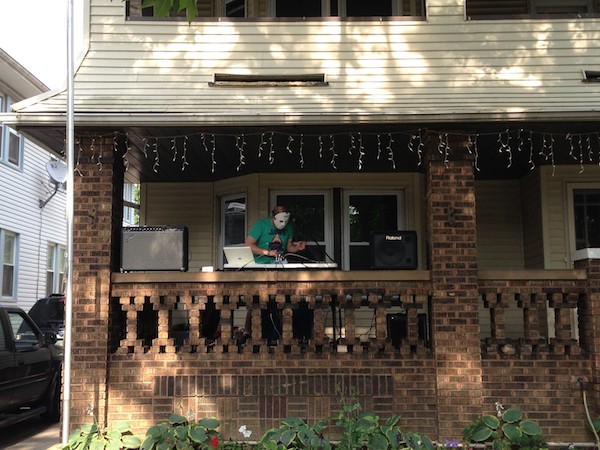 These venues draw different clientele: For example, the seated venues Nighttown and the Music Box Supper Club book music geared toward an older crowd, while the Agora’s metal-heavy slate draws passionate fans of all ages. But the scenery is unparalleled—for example, gigantic freighters often pass directly behind the Jacobs Pavilion during shows, causing artists to stop and wave at workers on the ship.

Cleveland’s homegrown artists such as Cloud Nothings, The Lighthouse and The Whaler, FreshProduce, and Wesley Bright and The Hi-Lites don’t always limit themselves to gigs at traditional concert venues. Consider the annual Larchmere PorchFest, when local bands perform on the stoops of houses in a quaint, artistic East Side neighborhood every June. Throughout the day, patrons stroll around the neighborhood with lawn chairs, stopping every so often in strangers’ front yards to take a seat and hear everything from folk and hip-hop to bluegrass to rock ‘n’ roll. It’s a gigantic, multi-street block party that draws fans from all over the city—and artists from all corners of the music scene. Unofficially, it’s the kickoff to summer in Cleveland.

During these warmer summer months, all of Cleveland’s nooks and crannies come alive. Edgewater Park and Euclid Beach Park host weekly concerts showcasing local talent amidst their lakes and greenery. Everything from cover bands to blues acts to the city’s legendary soul-funk troupe Kinsman Dazz Band make appearances. Locals enjoy from the patios of favorite restaurants, like Gordon Square’s cozy Luxe Kitchen and Lounge, and beloved barrooms, like the 1930s Tremont institution Prosperity Social Club. The venues in the downtown theater district, Playhouse Square, host the annual Tri-C JazzFest, which in 2016 threw the spotlight on legends such as Maceo Parker, Chick Corea, and David Sanborn.

Thanks to the attitude towards the arts in Cleveland, music isn’t something people have to carve out time to appreciate. Instead, tunes and sounds are an integral part of cultural institutions or events. Transformer Station, a contemporary art-driven annex of the Cleveland Museum of Art, hosts weekly summer concerts on the front lawn. This year’s slate includes everyone from Ethiopian pop act Debo Band, to the Sahara-based blues band Tamikrest, and the tropical-leaning Ondatrópica.

And (perhaps unsurprisingly) live music is a staple of the Rock and Roll Hall of Fame. Locals play on the outdoor plaza, while the venue’s popular monthly Sonic Sessions showcase up-and-coming touring acts from around the globe. The Rock Hall and its sister institution, the Library and Archives, host frequent talks, performances, and book readings. These events are often free, too, which is perhaps the biggest advantage for locals. History comes to us and camps out in our backyard.