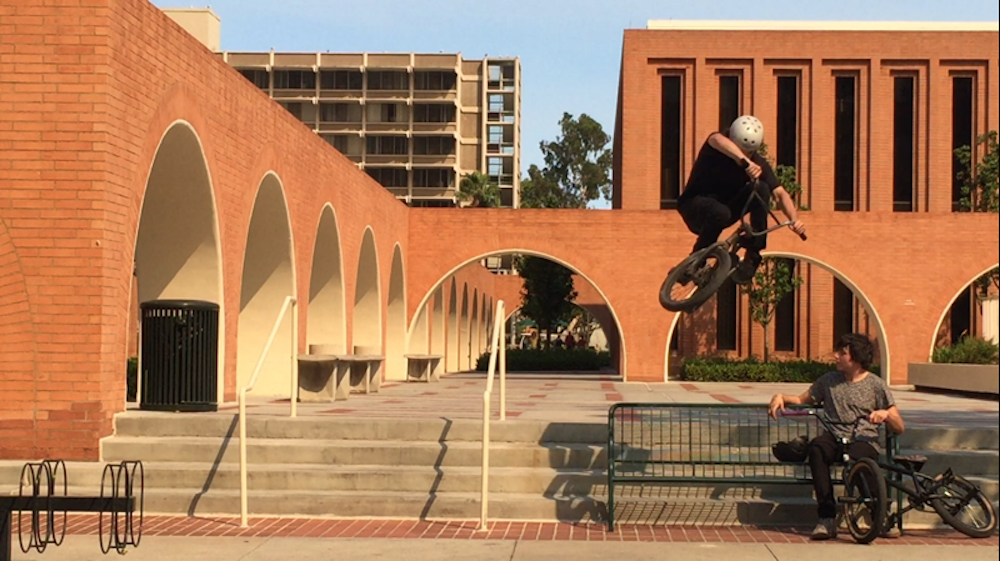 Rather than spending time in the sunshine on my last day of exams, I found myself strapped onto a gurney, an accidental passenger in an ambulance speeding down the wrong side of the street.

My mind was fuzzy, but the last thing I remembered was riding my bike toward the edge of a hilltop, with the intent to gap to a patch of concrete at the hill’s base. In doing so, I would have to air over a small metal electrical box that stuck out of the hillside. I had pulled this trick off countless times, and there was no doubt in my mind that things would go off without a hitch.

Unfortunately, I was wrong.

Injuries are a fact of life when you ride BMX, which stands for bicycle motocross. At first BMX was strictly a racing sport, but it has since evolved into a freestyle pursuit in which riders do whatever tricks they like in any place that works—from dirt jumps to skate park ramps to 10-stair handrails. Riding BMX in the streets, a big part of the thrill is finding obstacles that weren’t designed for extreme sports, and making them work for tricks.

And therein lies the sport’s allure. As the late BMX legend Dave Mirra said, “I’d risk the fall, just to know how it feels to fly.”

While it’s true that the thrill is fundamental to the BMX appeal, for me, riding is a more complicated matter, one tied up with childhood friendship and life-changing risks.

My BMX obsession started in 10th grade, when a classmate named Van became high-school-famous for posting photos of himself doing wall-rides in his dining room. The first time I met Van he was riding his bike full-speed down a garage ramp. He boosted off of a speed bump and into the air before pedaling back around to introduce himself. We hit it off right away. I was blown away by his confidence, and I soon noticed that when I was with him that same confidence bubbled up in me. I’d watch him ride with local pros, and imagined myself pulling off the stunts that seemed to come so naturally to him. But whenever I tried to ride Van’s bike, the magic that allowed him to leave the ground seemed to dissipate as soon as I touched the handlebars. My interest stayed frozen at the level of spectacle.

High school ended, and Van and I lost touch. But a few years later, while studying in Ireland, I found a man selling a top-of-the-line BMX bike for a fraction of what it was worth. Being pretty much alone in Ireland, my bike became my closest companion. I spent the next few months practicing hops, spins, and wheelies. I could almost hear my old friend yelling advice at me, telling me to pull my front end up harder or to remember to counter-steer when my bike began to roll backwards.

As the late BMX legend Dave Mirra said, “I’d risk the fall, just to know how it feels to fly.”

Though I was a novice with a foreign accent, Galway’s local BMX crew was quick to take me under their wing, and I soon discovered what’s since become my favorite thing to do on my bike—gaps. The term can be used as either a verb or a noun, and describes an area that can be jumped over, or the action of jumping such an area. You could say that you’ve gapped an area once you’ve jumped from one space or object to another, without touching anything in between.

I knew I was hooked the day I gapped a set of stairs that ran down to the water in my local park. The set was larger than anything I had ever jumped before, and the wet stone walkway at the bottom made for an unreliable landing space.

For weeks, I had stared at the spot and imagined myself jumping it, but was always too afraid to actually try. Then, one day, I went for it. I must have looked inept hurling myself down those stairs as clumsily as I did, but I’ll never forget the fleeting feeling of freedom that came to me as I flew through the air.

Most everything I’d learned in my life had come to me slowly and incrementally, and I was used to messing things up a few times before I succeeded. On that day, it felt great to do something right on the first try. When I jumped off the stairs, the desire not to fall and die was so strong that it pushed the very idea of failure out of my mind. As soon as my tires reconnected with the ground, I knew I had to chase that feeling. I’ve tried to carry this state of mind into everything I do, not thinking about the multiple tries it might take to get something done. If you remove the idea of redos from your mind, you’re much more likely to succeed the first time.

When my semester abroad wrapped up, I packed my bike into a giant box that ended up weighing almost 50 pounds, and brought it home with me. I didn’t realize just how attached I’d grown to my most beloved possession until I went to collect it from baggage claim. A note from TSA alerting me that they’d opened the box triggered a pang of violated concern in my gut.

Soon after returning to the states, I packed my bike up one more time, and prepared to attempt the largest gap of my life, moving 3,500 miles from my childhood home in Baltimore to Los Angeles.

Once I arrived in L.A., it felt like I had stepped into the center of the BMX world. When I needed new parts for my bike, I took it to OSS, a store in the Fashion District that runs the biggest BMX blog on the Internet. At the store, a few of the pros regularly featured on the site were hanging out and were quick to introduce themselves to me using their first names when I walked in. And after a few months, I ran into Van, who had just moved out here, while we were on our bikes. On that day, BMX reinvigorated a friendship I thought I’d lost.

One of the best things about riding in L.A. is the group street rides. I’ve gotten the chance to ride with almost all of my idols, as nearly every pro rider makes at least one trip to Southern California each year. On a recent Saturday, several hundred riders headed out en masse from Thee Block, a BMX culture store in East Hollywood. No roads were shut down, and no police cars escorted us.

A group of BMX riders mobbing the streets of downtown L.A

Most riders—including me—go without brakes. We stop by dragging our feet against our back tires or the ground. While this can lead to high-speed accidents and ruined shoes, it makes bikes simpler to fix, more maneuverable without any pesky brake cables, and generally sleeker-looking.

Riding in such a large pack, no stopping was required.

Through some telepathic choreography, we began weaving through the gridlock on Santa Monica Boulevard in a great snaking motion that didn’t bother slowing down for red lights. At the top of a hill on West Fourth Street we attempted something equal parts reckless and fun. All 300 of us rocketed down the hill, riding straight across the bridge that runs over the 110 Freeway into downtown Los Angeles.

On the other side of the bridge, we were met with a wall of cars. Some riders saw this as more of a challenge than an inconvenience, cutting and weaving through the mesh of traffic. One boy even went so far as to jump his bike onto the hood of a stopped taxicab. To the disbelief of the cab’s passenger, the kid rode straight off the back of the car, rolling his bike right over the rooftop taxi sign.

Our final destination was a ramp made from parking barriers placed atop a concrete incline in a private lot. A security detail was there to greet us, but once the guards saw what we were doing, they didn’t make us leave. One guard commented, with, perhaps, a tinge of envy, that we had “a hell of a party” going on.

A young boy turned to his father, and asked if it would be okay for him to try riding the ramp, saying he was afraid that the other bikers would make fun of him for not being good enough. After a few words of encouragement, the boy decided to give it a shot. He pedaled hard, made it up the incline, and tapped his front tire on the base of the parking barrier. As he rode back to his dad, the riders he passed bent down to give him high-fives.

Fast-forward a couple of months to that day that found me in shock trauma, my arms tangled amidst tubes. I hadn’t quite cleared the gap, and even with a helmet, the impact of my fall was enough to knock me unconscious. My best guess was that my tires had slipped out when I landed short on the wet grass.

Once I recovered from my concussion and climbed back on the BMX saddle, the lasting pain was one of embarrassment. After riding away from countless close calls, my “big crash” was a slip-and-fall less than two feet, into a grassy hill.

Still, you could trip and break your neck right outside your front door, no bike required. My fall that day—unimpressive as it seems—could have been fatal. I often ride alone, but fortunately for me, on that day, Van was with me. BMX nearly did me in, but Van made sure I lived to ride again.