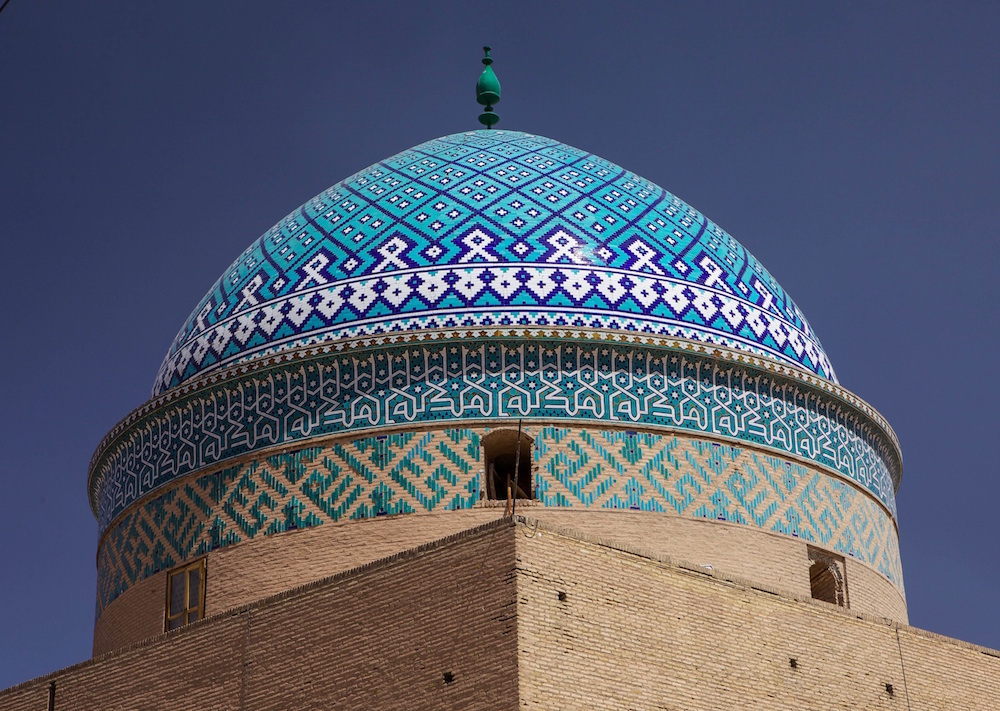 The green dome of the Omar ibn Al-Khattab mosque in Los Angeles interrupts the low skyline with a quiet gravitas. The mosque has been here since 1982, next door to the University of Southern California, its minaret a beacon for the Muslim community that clogs Exposition Boulevard with traffic every Friday afternoon for congregational prayers. When I was younger, this was where my community held funerals and weddings, Ramadan dinners, and Eid celebrations. At sunset, we gathered in the great prayer hall, in the glow of dying sunlight and fluorescent bulbs, and prayed our Maghrib prayers.

The dome at the Omar ibn Al-Khattab mosque is largely decorative, as most domes are. Inside a large chandelier hangs heavily from a chain attached to the apex of the dome, crystals reflecting shards of light. Windows situated along the rim of the dome collect sunlight and disperse it throughout the hall. When the Imam finally makes the adhan, the call to prayer, it echoes elegantly throughout the room, the sound magnified as it travels along the arch. But as domes go, it is a modest one, its interior painted in white.

The domed structure predates Islam. It became a dominant form of architecture because there was no wood for roofing in the Middle East in the seventh century. Instead, they used clay bricks to build, arranging the blocks in circles to form a dome. Domes soon became hallmarks of royal architecture, adorning the buildings honored, says historian Oleg Grabar, with “princely presence.” The Islamic civilizations that came to pass would adopt the architectural form for their own holy buildings, inheriting the reverence they once conferred to secular palaces. 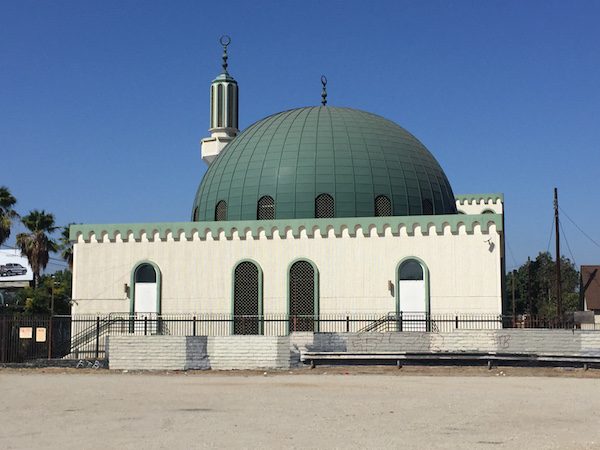 Domes acquired a functional use, helping Muslims orient themselves toward Mecca for prayer. But they acquired symbolic meaning as well, as vaults to heaven. “In actual fact,” writes Nebahat Avcioglu in Identity-as-Form: The Mosque in the West, “Neither the Koran nor Traditions—the sayings of the Prophet—dictates a shape for a mosque or its accompanying structures. Few Muslims would even disagree with the idea that there is no need for a mosque to pray.”

And yet mosques all around the world bear domes. In Turkey, domes behave as lighthouses for roving believers in search of quiet places for prayer. Tourists cluster in the back of mosques to take photos of the dome interiors, painted extravagantly with Koranic scripture and geometric design. In Iran, these patterns coat the dome exteriors, rendered in vibrant colors. In Southern California, too, these domes dot the landscape. The King Fahad Mosque in Culver City is topped with a smaller dome, but its interior is painted decadently with red and white inscriptions and overlaid with gold filigree. The Omar Al Farouk Mosque in Anaheim is topped with an extravagant rose gold dome. A green dome sits on the roof of the Islamic Society of Orange County in Garden Grove. Collectively, these mosques constitute a topography of Muslim-American existence in the Los Angeles, each one a center for faith-based community-building. 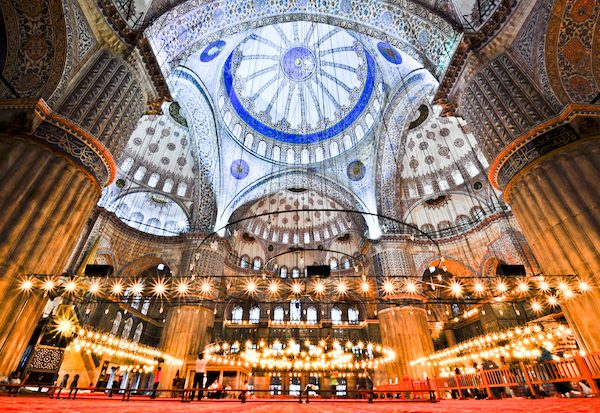 I used to go to the mosque with some regularity, and when I did, seeing the dome peek up from the skyline as I approached that corner of Jefferson and Exposition boulevards always evoked in me in singular feeling of belonging. This city is so hostile to so many inhabitants, its extensive sprawl isolating and alienating and its public services meager and allocated selectively. But L.A. had inscribed a place made specifically for me—a Muslim-American—and marked the territory with one of the most recognizable symbols of Islam, the dome, along with its sister symbol, the minaret.

There is power, however minute, in visual representation. Ernst J. Grube, a historian of Islamic art, surmised that this was, in fact, the role domes played in Islamic architecture. “The dome appears to be a general symbol, signifying power, the royal city, the focal point of assembly; it can therefore serve both religious and secular purpose,” he wrote in Architecture of the Islamic World—Its History and Social Meaning.

This is also the case in the contemporary U.S., where domes decorate the tops of government buildings and other secular facilities. I once mistook the domes of the Shrine Auditorium for those of a mosque. Located only a few blocks away from the Omar ibn Al-Khattab mosque, the Shrine, now a popular event venue, has all the signifiers of Islamic architecture—arched doorways, a dome at each corner, ornate geometric etchings. Los Angeles architects John C. Austin and G. Albert Lansburgh wanted the building to emulate a Moorish palace. 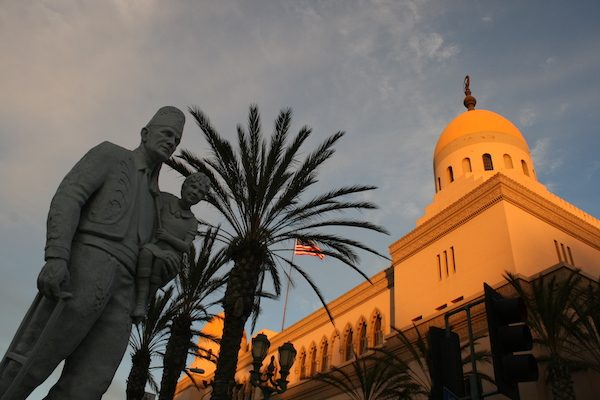 The Shrine Auditorium in Los Angeles.

Before a fire ravaged the building and necessitated a renovation in 1920, the Shrine was called the Al Malaikah Temple. It served as a meeting place for members of Shriners International, a masonic fraternity that has borrowed other symbols of Moorish tradition, all the while distancing itself from any Islamic or Middle Eastern connotations. “The Order of Shriners International, so far as the historical record shows, is an American institution,” they write on their site. “Oriental signs, tokens, and costumes were adopted by those who originated the Order for the sake of pageantry. The jeweled costumes, the picturesque Arab and Fez, all appealed to the organizers and the result today is the greatest Fraternal Order the world has ever known.”

Sometimes I still drive by the Shrine Auditorium and feel a Pavlovian heart-tug at the sight of those domes. The building’s outline has the appearance of something that should belong to me. But its architecture is a facile homage to the culture that gave birth to it. Its domes, after all, are not visible on the inside. There is no adhan echoing within its walls. At the prayer hall of the Omar ibn Al-Khattab mosque, our whispered supplications are dispatched up and collected in the hollow of the dome.