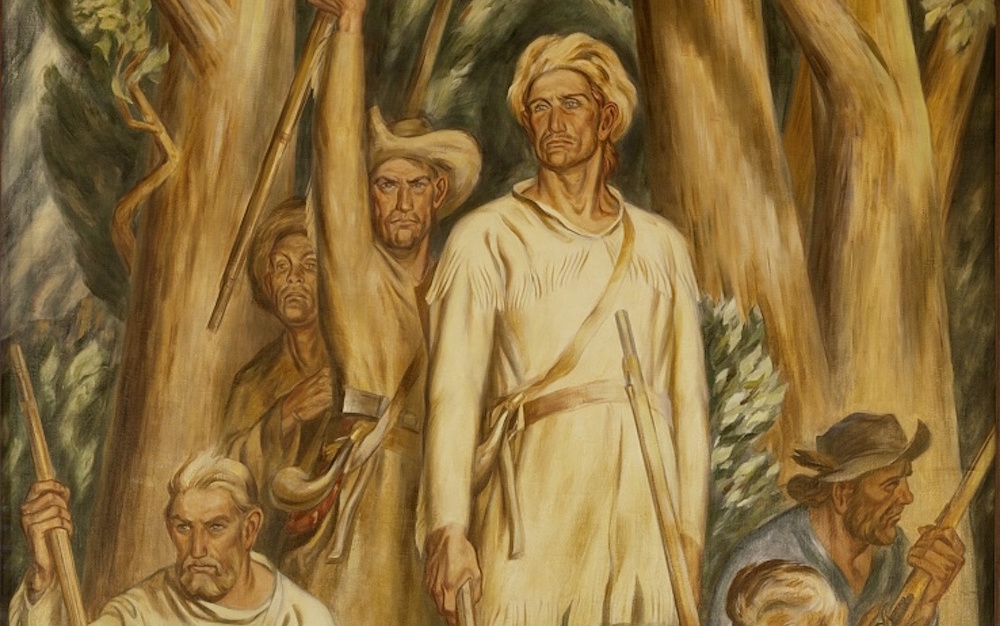 So I didn’t grow up learning about Daniel Boone and his exploration of the frontier around the time of the American Revolution. If I’d heard of him at all, I probably thought, like many people, he was fictional. But go back to my British Columbia elementary school and there he is, in a 1985 copy of National Geographic on the shelf of improve-yourself reads. That year I was 10, permed and brace-faced and not terribly happy, often sniffing around for something more alluring than modern life. The crusted hull of the newly found Titanic on the cover caught me. But when I parted the magazine with my thumb, it fell open to a pen-and-ink drawing of a man carrying a body, open-eyed and loose-jointed, a spill of blood pouring from its mouth. The caption said it was Boone, who turned out to be an actual person, holding his dead son. Every day at free time I read that article, gawking at the pictures of Kentucky and the westward trails Boone helped open in the 1700s, and at that illustration. I didn’t know why.

Certainly America had a kind of mystique, even in 1985. Crossing the border into Washington state was a palpable change. The landscape was no different, but the licence plates and the slightly elongated vowels were. The unapologetic motel names (The Apple, The Deep Water) and the chatty gas station signs (Come on in! Canadian dollars at par). Baby Ruth chocolate bars and Chuck E. Cheese restaurants, known only from TV commercials on the U.S. stations we got. The gigantic Paul Bunyan statue looming out of the redwoods in Klamath, California, which was cloaked with a kind of glamour in spite of its splintery edges. As we made a pit stop during a childhood road trip to Disneyland, a woman there told me Bunyan was a real person; then my parents said he wasn’t. The U.S. seemed built out of legendary things. It seemed built for travel and for looking.

I didn’t think about Daniel Boone during these childhood trips, or once I moved into the next grade. I can’t remember thinking of him again at all until I was pregnant for the first time, lying on the dusty carpet of my study, which was soon to morph into the baby’s room. My first book, a story collection, was about to come out, and I was trying to figure out what to write next. Maybe it was the horrible dread of losing a child that made it surface, but that National Geographic picture snapped back into my brain. I asked the library to dig up the magazine, and once I saw it again properly, I realized I’d remembered it as a photograph, which of course it wasn’t and couldn’t have been. I knew then what I wanted to write about was Daniel Boone—Dan to me now—and 18th and early 19th century Kentucky, and what happens when legend is mapped onto actual people and places.

My novel, All True Not a Lie In It, is about Dan’s life and family. It tries to get at how it felt to believe in a paradise just beyond the mountains, to be full of an urge to pick up and move on, regardless of the wreckage chained to that desire. The journey is of course the American narrative, from Adventures of Huckleberry Finn to Lolita to Road Trip. Travel and its aftermath seem to me the root of America’s story about itself—colonial exploration and immigration, slave ships and escapes, Native American seasonal movement and the eventual reservation system. 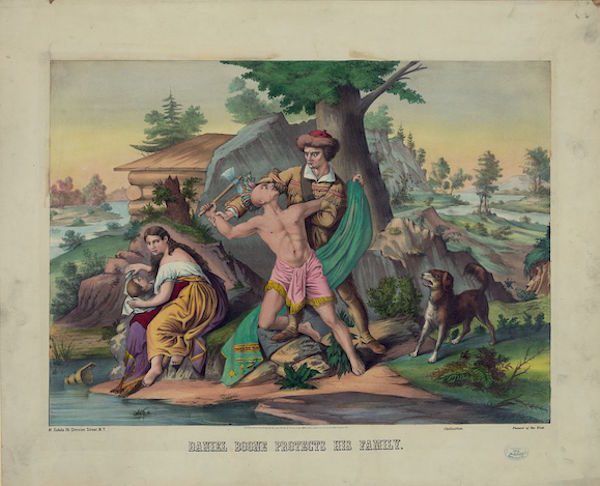 Dan grew up an immigrant’s son in a Pennsylvania Quaker community, close to several Delaware and Catawba native communities, and when the family was booted out of the group, they left the area to look for more freedom and land. Dan never really stopped, exploring through North Carolina and the Blue Ridge mountains, and later taking his wife and children into the Kentucky wilderness of his fantasies. Those fantasies and the travel that fulfilled them led to his son’s death, his daughter’s kidnap, and his own capture and adoption by Chief Blackfish of the Shawnee. He was heavily remorseful for the damage to his family, but rarely stopped moving them on in search of something better.

The actual events of his life are dramatic enough to seem invented, as many writers have realized, and embellished, over the years. For instance, many people think he was at the Battle of the Alamo in Texas, which occurred after his death, confusing him for Davy Crockett (unhelped by the fact that actor Fess Parker played both Davy Crockett and Daniel Boone in different 1960s TV shows). This seems an American tendency, too: the capacity to reinvent the self (we see you, Madonna), but also to reinvent someone else in a desired image (JFK as King Arthur). People in the 20th and 21st century want to see Dan in a coonskin cap, though he never wore one and in fact hated them. And white Americans in Dan’s time wanted a recognizable national hero, a man fighting for the newborn country against its royal oppressor, a crack shot, fair but firm in dealings with so-called “Indians.”

This desire to create a legend attempts to paint over any dullness or ugliness in a life, but different shades of ugliness sometimes get painted on. Twenty-five years after Dan’s death, just as westward expansion into native territory exploded, he was re-buried, with a new monument featuring “Indian-fighter” carvings placed on his grave. I think this twisting of his life would have discomfited Dan, who seems to have felt deep closeness to his adoptive Shawnee parents and sisters, avoided fighting as much as possible, and was likely most comfortable with the native way of life in the wilderness. But again, this is a matter of seeming.

I know I call him Dan—and I know Dan is my invention, this figure already imagined again and again and re-created one more time. As a child traveling south, I thought being American meant having a built-in expansiveness, a sense that there is always somewhere else to go. I see that now in Daniel Boone. But after writing this book, I also think it means an ability to see double, to perceive, even dimly, that a person actually lived while overlaying that life with wishes, ideas, the stories one wants. For Americans, the exact details of Boone’s life have always seemed to matter less than his suitability for legendary status. The stories that surround him helped people in his time and for centuries afterwards smooth over the cost of relentless expansion. A gift and a blindness. My version of Dan has both.