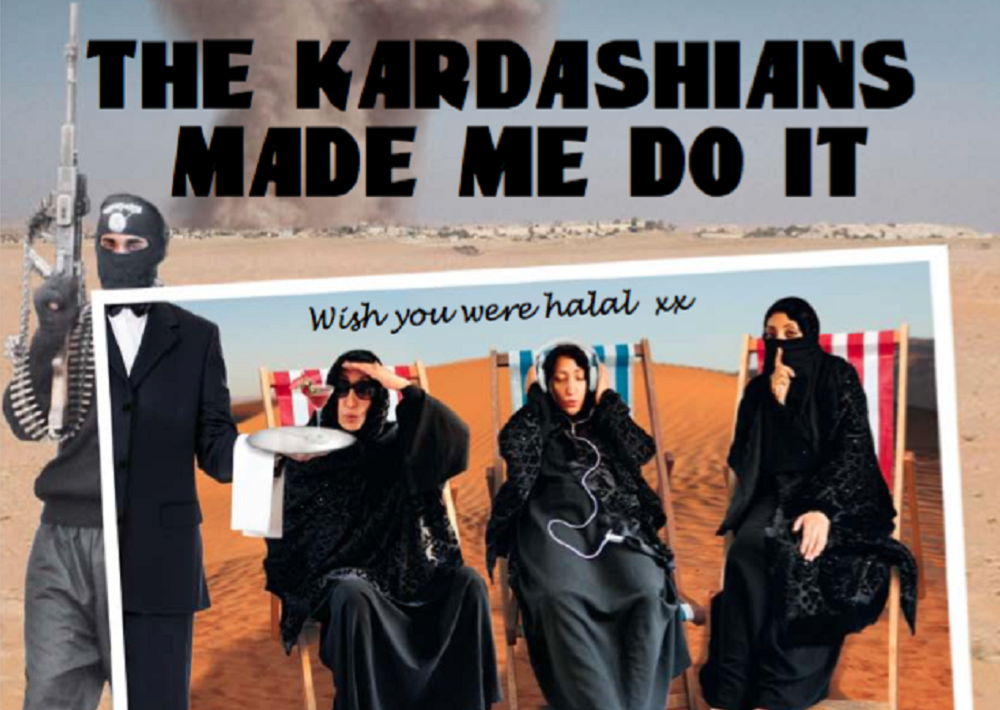 I thought it was important to let everyone know about my struggle to rip follicles from the root of my face, armpit, and chest every three weeks at a cost of 50 pounds a go. It was a frivolous routine, but that’s how I liked my comedy then—apolitical and areligious. As a Brit of Pakistani Muslim descent, there was always a pressure to explain “my people”—so occasionally I’d liven it up with a few jokes about suicide bombers or arranged marriage. But mostly I stuck to the superficial, and it went down well enough in British clubs filled with drunk men who thought an arranged marriage was something you organized yourself.

There were exceptions, however. One day after doing a show that I thought was funny, for example, a journalist approached me and asked why I was making jokes about something as trivial as my moustache. There were so many other important issues, he insisted—honor killings, terrorism, Zayn Malik. “What a waste of a good Muslim!” he exclaimed.

I tried to explain to him that I’m really not what would be considered “good.” I stalk men, I tell jokes, I wear a G-string on a Tuesday. This certainly wasn’t the first time someone’s expected me to be a professional full-time representative of my religion and, as always, it was too much. I wanted to joke about what I wanted to joke about. So I continued to seek refuge in my moustache and revert back to the mundane material that anyone—an Asian woman, a black man, a white guy—could use. I was just like everyone else, which is exactly what I wanted.

It went on like this for seven years until last February, when three teenage girls from London packed up their bags during the school holidays and went to join ISIS. The news created a media firestorm across the U.K. Most teenagers were getting drunk, reading Harry Potter, or watching RuPaul’s Drag Race, but these girls decided to join the world’s worst most barbaric terrorist group?

The story, however, rang differently for me. I immediately thought I knew why they had gone, and felt I had to say something. And I did more than say something—I made it an entire comedy routine.

You may not think that young women risking their lives and well-being to go to one of the most dangerous places on earth would make for humorous fodder. But I had known girls like this. As a native Brit, I had been brought up like these young women, and I instinctively realized that their rash decision had nothing to do with religion. This feeling was confirmed as I watched one of the girls’ sisters testify to Parliament. She explained that she couldn’t understand why this happened, “My sister was into normal teenage things,” she said, “She used to watch Keeping Up with the Kardashians.” Yes, I thought, that’s probably exactly why they left.

I wrote a show about the episode—dubbed, of course, “The Kardashians Made Me Do It”—and based my material on actual things the girls said and did. For instance, police investigating the families’ homes found a handwritten checklist one of the girls made of things to buy before she left: makeup, body lotion, bras, new knickers … and an electric hair remover. “Wait, you’re going to join a sixth-century barbaric terrorist organization, and you are thinking of doing your bikini line? They’re not going to let you out of the cave, never mind let you shave your legs. And if you’re doing your bikini line, you’re probably too old for them anyway.”

… the reason I think these girls have gone is not radicalization; it’s sexualization. They’ve seen these ISIS guys on TV and yes, they’re barbaric. But they’re also macho … they’ve got guns … they’re hot!

In this way, my show makes clear that the reason I think these girls have gone is not radicalization; it’s sexualization. They’ve seen these ISIS guys on TV and yes, they’re barbaric. But they’re also macho, they’re hairy, they’ve got guns, they’ve got a rebellious cause—they’re hot! “Yeh I’ll have a bit of that, he’s a bit of all right.” These girls think they’re going to get an AK-toting Muslim version of Brad Pitt or the One Direction of Islam. Oh how wrong they are. There’s nothing new about being attracted to the bad boys, even if they are barbaric men—Rihanna and Chris Brown, Pamela Anderson and Tommy Lee, Punch and Judy. They’re just the latest to join the unfortunate club.

After taking the show public, I expected hate mail, abuse, and threats from people objecting to what I say in my performances. But to my surprise, for a long time I had nothing. Not one negative email, not even from my dad! Come to think of it, I got more abuse for talking about being a hairy woman than joking about jihad.

Instead, the overwhelming response to my show has been audience members telling me things like, “I never saw it that way, you made me see things differently,” or “I was laughing … I didn’t expect to be laughing at this!” Of course, it’s a comedy show not a documentary. I’m a comedian, not CNN.

In fact, the only serious backlash I’ve received for the show has come from the right-wing media. They went after me after I told some of my jokes on a popular daytime talkshow, reprinting some of the more outrageous—and often grammar-challenged—social media posts from “furious” viewers (“Glorifying this woman making jokes about ISIS and terrorism is disgusting!”) and suggesting I was a terrorist sympathizer.

Ironically, it’s the same right-wing mouthpieces that expect “my people” to condemn violence committed by any Muslim-identified terrorist anywhere in the world. Yet when I speak up to belittle and satirize ISIS for the absurdity of the fake jihad-chic lifestyle they sell, I get told to shut up. I’m on their side and they still attack me?

It made me realize that when media talking heads say “Why aren’t Muslims speaking up?” they don’t really want us to speak up. We ruin their tidy us-versus-them narrative. It’s not that they don’t want to hear jokes about ISIS, either. It’s just that they want to hear them from comics like Louis C.K., Bill Burr, and Daniel Tosh. Safe white guys they can relate to and feel comfortable with. Even Donald Trump can get away with saying things like, “Obama was the founder of ISIS” under the guise of “sarcasm.” I’m a brown Muslim woman who is suggesting other ways to look at these situations—maybe the real reason why young girls go off to marry ISIS fighters is less about religion and more about sex and rebellion—and I get accused of supporting terrorism.

Fortunately, freedom of speech—that valuable touchstone of Western democracy—usually comes around to making room for new voices. This is especially true in comedy. The Jews were able to make fun of the Holocaust. The Irish were able to make fun of the IRA. Now it’s time for Muslims to be funny. Let us fight our own war on terror with laughter—it may work even better than the bombs.