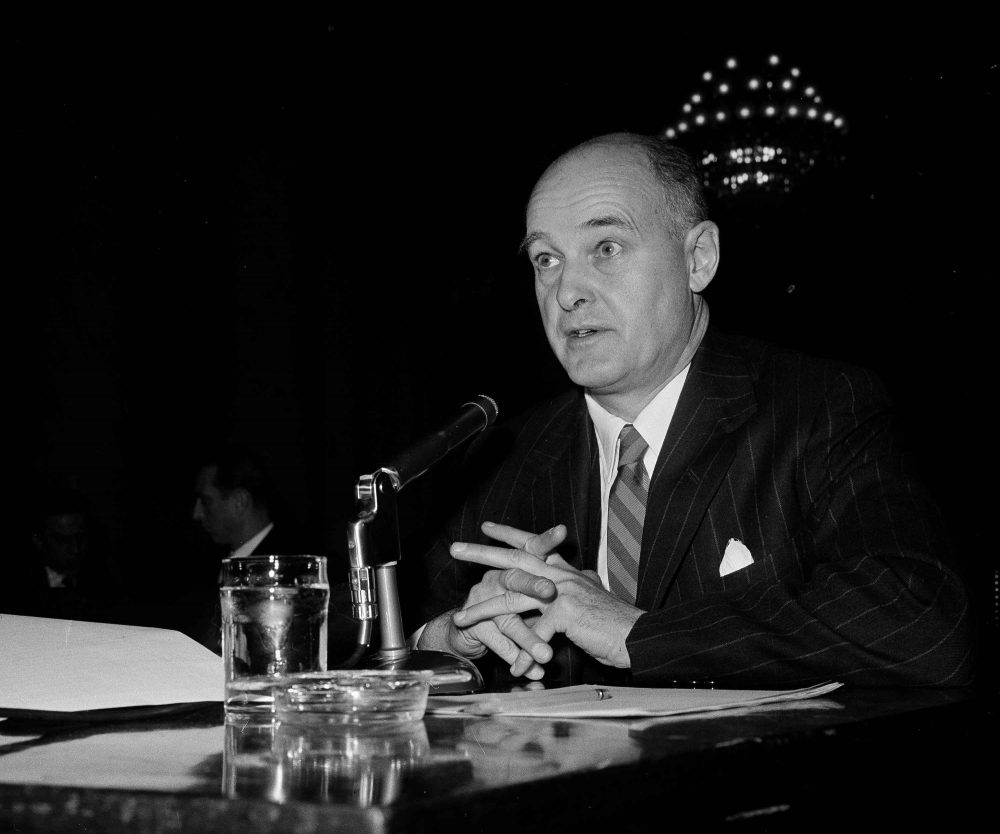 The enduring irony of George F. Kennan’s life was just how much the architect of America’s Cold War “containment” strategy—aimed at stopping Soviet expansionism—loved Russia.

Kennan arguably played a larger role in shaping the U.S.’s view of a major foreign power, and thus our relations with that power, than any other American in modern history. That the power in question was the Soviet Union, and the time in question the crucial period after World War II, made his outsized influence all the more remarkable.

He brought an authoritative blend of scholarship and experience to posts as diplomat, ambassador, State Department policy adviser, and Princeton-based professor—exerting his influence on American strategy from both inside and outside the government. For an entire generation of U.S. officials who guided the nation’s foreign policy in the Cold War, Kennan became the preeminent guide of all things Russia. His main legacy: Advising Americans how best to restrain the Soviet threat.

Yet despite the key role he played on the U.S. side of the adversarial relationship, Kennan was deeply enamoured with Russia. In diplomatic postings across Europe in the 1920s and ‘30s, he mastered the language – “No American spoke Russian the way George did,” according to one colleague. Over the course of his long life (Kennan died in 2005, aged 101), he read and re-read the great works of 19th-century Russian literature and travelled the country as frequently and extensively as he could. While in London in May 1958, he went to see a performance of Anton Chekhov’s The Cherry Orchard and recorded a powerful reaction in his diary:

Seeing The Cherry Orchard stirred all the rusty, untuned strings of the past and of my own youth: Riga, and the Russian landscape, and the staggering, unexpected familiarity and convincingness of the Chekhovian world—it stirred up, in other words, my Russian self, which is entirely a Chekhovian one and much more genuine than the American one—and having all this prodded to the surface in me, I sat there blubbering like a child and trying desperately to keep the rest of the company from noticing it.

His Russian self and American self would make for uneasy Cold War companions. And although Kennan profoundly admired the nation, his heart ached for how Lenin and Stalin had so brutally altered its path.

Kennan’s warm feelings toward Russia were even known by Mikhail Gorbachev, who met Kennan in 1987 in Washington, D.C. and told him, “We in our country believe that a man may be the friend of another country and remain, at the same time, a loyal and devoted citizen of his own; and that is the way we view you.” This recognition by an adversary made for a moment of profound personal satisfaction for the former diplomat.

Kennan was best known to most Americans as the Cold War’s Paul Revere who sounded the alarm in 1946 that the Soviets were coming (into Central and Western Europe). Frustrated by the Truman administration’s inability to appreciate the magnitude of the threat posed by Stalin’s Soviet Union, the then American chargé d’affaires in Moscow cabled Washington in what was to become the most famous communication in the history of the State Department. In his nearly 6,000-word “long telegram,” the diplomat emphasized that the Soviet Union saw no path to permanent peaceful coexistence with the capitalist world. Stalin—fuelled by nationalism, deep-set fears of external attack, and Marxist-Leninist ideology—was determined to expand his nation’s power. But, Kennan explained, the Soviets were weak, and if the Western World made it clear they would put up a strong resistance at any incursion, the opportunistic menace could be contained.

The telegram’s impact was profound. Circulated quickly and widely, it was read by the secretaries of War and the Navy, and later by President Truman himself. It became required reading for senior members of the armed forces and was also cabled to America’s embassies and missions abroad. The sheer force of the argument persuaded many in power in part, as one Truman aide remarked, because “Kennan tied everything together, wrapped it in a neat package, and put a red bow around it.”

“Kennan tied everything together, wrapped it in a neat package, and put a red bow around it.”

Kennan was recalled to Washington in May 1946 and made Deputy Commandant for Foreign Affairs at the National War College. Ten months later, writing anonymously under the letter “X,” Kennan published an essay in Foreign Affairs titled “The Sources of Soviet Conduct” that elaborated on his long telegram’s diagnoses and recommendations, this time for a public audience. Mr. X, as the author became known, compared the Soviet Union to a wind-up toy that would move relentlessly in a particular direction unless a barrier was placed in its way. He pulled from his extensive knowledge of Russian history to create a psychological profile of a totalitarian regime where truth was fluid and worldviews were informed by “centuries of obscure battles between nomadic forces over the stretches of a vast fortified plain” and assaults over the centuries from Mongol hordes from the East and Napoleon’s and Hitler’s formidable armies from the West. These memories of death and destruction melded with an expansionist communist worldview. The result was a state determined, no matter how long it took, to amass a powerful empire that would protect the motherland from any enemy. In other words, there was to be no meaningful engagement with this Russia for a long time to come.

To restrain Moscow, Kennan advised that “the main element of any United States policy toward the Soviet Union must be that of a long-term, patient but firm and vigilant containment of Russian expansive tendencies.” This sentence was to become his policy legacy. Finally, here was a compromise between an all-out war of superpowers and a passive peace strategy that would invite opportunistic Soviet aggression. Be patient. Show strength. Wait for the inevitable fall. In addition to then President Truman, who put this strategy into full force as the Cold War began, eight more presidents would go on to subscribe to variations of this seminal policy.

Although he continues to be best known for his advocacy of containment, it is important to note that Kennan largely intended it to keep communist incursions out of Western Europe and Japan via non-military means: economic aid, propaganda, political warfare. This vision was played out in policies such as the Marshall Plan, which he played a key role in designing as the first-ever head of the State Department’s Office of Policy Planning. His narrowly tailored vision of containment, as we now know, didn’t last. From the end of the Korean War to the fall of the Berlin Wall, Kennan consistently criticized the ways in which his policy was hijacked—from justifying militarized containment of low-stakes countries like Vietnam to defending the anti-Russian flames fanned by demagogic McCarthyites to being used to rabble-rouse ordinary Americans into supporting the nuclear arms build-up under Reagan. Though he continued to weigh in on major foreign policy debates from posts as U.S. ambassador and as a scholar at the Institute for Advanced Study, he lost most of these battles.

Even after the dissolution of the Soviet Union, Kennan continued bemoaning what he considered the misappropriation of his views. In an op-ed for The New York Times in 1997, for example, Kennan prophetically warned that Bill Clinton’s eastward expansion of NATO would be a fateful error. The move to include Poland, Hungary, and the Czech Republic in the Cold War-era military alliance, he wrote, would only serve “to inflame the nationalistic, anti-Western and militaristic tendencies in Russian opinion.”

Kennan correctly surmised that NATO expansion would sour future U.S.-Russian relations. Although the man had many blind spots, particularly in his elitist and ethnocentric resistance to a more democratic and heterogeneous vision of America, his read of how Washington’s actions would be perceived in Moscow was almost always on point. And it was probably Kennan’s “Russian self”—his deep knowledge and empathy with the history, language, land, and literature that animated the Russian people—that made him so much more adept than his American-minded contemporaries. George Frost Kennan may be remembered as the architect of Western “victory” in the Cold War, but he was also one of the most empathetic American friends Russia has ever had.