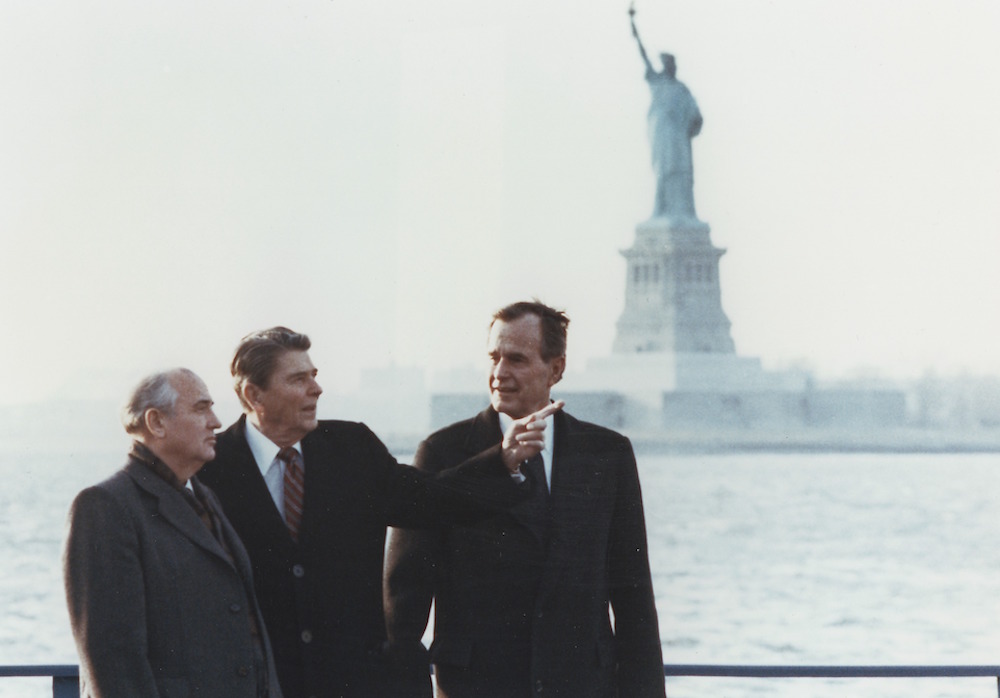 Donald Trump’s views on U.S.-Russia relations bring to mind something that Shakespeare points out in King Lear—that sometimes the court fool is the only person telling the truth.

Washington’s foreign policy establishment is an imperial court of a particularly Byzantine kind, and when it comes to Russia and certain other areas of policy, the court’s insular, conformist, and bipartisan consensus has so crushed free discussion, essential critiques have been banished to the fringes. No Washington analyst or commentator who values his or her career, and wants to be recognized as residing within the narrow confines of mainstream American “nationalism,” is likely to have the guts to challenge settled wisdom when it comes to U.S.-Russia relations.

Enter Trump. The candidate may be a professional TV clown, with buffoonish and dangerous opinions on a wide array of issues, but when it comes to Russia, his views merit serious consideration.

The U.S. media obsesses over Trump’s rather grotesque personal admiration for Vladimir Putin, and the authoritarian, macho, tough guy image that both seek to portray. But this focus allows the media and foreign policy analysts to avoid addressing the actual content of Trump’s broader Russia policy.

Perhaps that’s not surprising, given how the U.S. media and commentariat have long conflated Russia with Putin. Russia’s behavior is often portrayed as springing from the personal whims of a brutal dictator, rather than reflecting an overwhelming consensus among Russian policy elites and society—a consensus with deep roots in Russian nationalism, strategy, and Russian history. Of course, that does not make Russian external policies correct. It does, however, make them enduring, coherent, and largely predictable. They are unlikely to change significantly even after Putin retires from the scene.

Russian actions found objectionable in Washington are most often supported by all significant factions of the Russian opposition, who can be more nationalist than Putin. But challenging “Putin” may seem an agreeable and cost-free occupation for Washington’s policy elites; challenging Russia has a rather more challenging ring to it, for anyone who knows history.

… the policy elites’ attitudes towards Russia reflect beliefs deeply entrenched in American culture. These collective beliefs have a grip so powerful that they can lead people to act against their interests …

These days, Washington policy elites rarely articulate reasons why continued confrontation with Russia is in the interest of ordinary Americans. This goes back to a collective failure to answer a question set by the realist thinker Owen Harries, former editor of The National Interest: that if the Cold War with Soviet Communism was indeed an essential and epochal struggle requiring the transformation of U.S. institutions and the massive mobilisation of U.S. resources, then why did the end of the Cold War and the Communist threat not naturally also lead to a transformation of institutions and a demobilisation of resources?

For Trump, the failure to adjust the U.S.-Russia relationship to a new reality serves the entrenched policy establishment, not the American people. The pillars of Trump’s retrenched nationalism (which he shares with far-right European political factions like Marine Le Pen’s French National Front) rest on what he claims are the real interests of ordinary U.S. citizens: restrictions on immigration; protection against terrorism, which threatens the lives of Western citizens in a way that the Russian government has not the slightest desire to do; and the management of trade relations so as to protect the jobs and living standards of ordinary people. On these issues Russia is either irrelevant or an ally.

Foreign policy and national security elites, meanwhile, have become so bound up with a continuation of Cold War institutions that abandoning them would amount to a mortal threat to their personal and institutional interests, and so the necessary structures of hostility and confrontation have to be continued. By this I don’t mean to impute conscious individual cynicism and opportunism to most U.S. foreign policy experts. Rather, the policy elites’ attitudes towards Russia reflect beliefs deeply entrenched in American culture. These collective beliefs have a grip so powerful that they can lead people to act against their interests, and even (as in war) against their survival.

In the case of the U.S. policy elites, what followed the end of the Cold War can be summed up in the curious trajectory of Paul Wolfowitz and his beliefs. In 1992, Wolfowitz, then serving as Undersecretary of Defense for Policy in the George H.W. Bush administration (under Defense Secretary Dick Cheney), together with his assistant “Scooter” Libby, wrote an advisory calling for the U.S. to prevent the emergence of any potential rival, not only on the world stage but in any one region of the world, and be prepared to use force unilaterally to this end. In other words, the USA should be the sole and permanent hegemon in every part of the world.

Leaked to The New York Times, this document alarmed much of the U.S. policy establishment and commentariat, who wasted no time in pointing out that no country in history had achieved this sort of hegemony, that it would impose a massive burden on U.S. resources, that it would conjure up enemies who otherwise would have no reason to be hostile to the USA, and that the fading of the global Communist threat made such hegemony less necessary than ever. In effect, the plan amounted to U.S. global primacy for the sake of U.S. global primacy and was promptly disowned by the Bush administration itself.

Remarkably, in subsequent years the basic principles of the Wolfowitz/Libby paper were gradually and quietly adopted as strategy without serious debate by both the Clinton and George W. Bush administrations. After the overwhelming U.S. victories in the first Gulf War and in NATO’s Balkans campaign against Slobodan Milosevic, by the late 1990s both Republican and Democratic foreign policy elites were lulled into thinking that the American “hyperpower” could have its way in a newly “unipolar” world with relatively little effort. And America’s civic nationalism has always believed passionately that U.S. power in the world is a force for good, morally justified, and welcomed by all people of good will in the world.

Washington’s own expansionist policies have thus been sold to the U.S. public as necessary to defend the USA against Russian aggression—even though since the end of the Cold War there has been no recorded Russian threat against the U.S. …

If Hillary Clinton wins in November, these principles look to be the guiding light of U.S. foreign policy in the next administration as well. Barack Obama, by his own confession a cautious realist at heart, was only able to slightly moderate this approach to the world, with its deep roots in the old nationalist (“exceptionalist” if you like) belief in America’s role, duty, and right to lead the world towards freedom and progress.

This approach led to the bipartisan U.S. strategy of extending NATO, first into Eastern Europe and then into the former USSR itself, contrary to promises made to Mikhail Gorbachev in return for Soviet agreement to German reunification. This was accompanied by the creation of GUUAM—a bloc of Georgia, Uzbekistan, Ukraine, Azerbaijan, and Moldova that was supposed to erode Russian influence in Central Asia and the Caucasus and replace it with U.S. leadership. (It should be noted, by the way, that Uzbekistan and Azerbaijan are open dictatorships, with Uzbekistan widely understood as an exceptionally repressive one.)

At no stage was there any serious attempt to address the obvious question of why Washington, after two centuries of completely ignoring these former Soviet regions, had suddenly developed a vital national interest in them; or whether there was anything that ordinary Americans could conceivably gain from the inevitable confrontations with Russia that would result from acting on this new interest. Instead of seeking to answer these questions, let alone raise them, Washington’s establishment has engaged in intellectual and moral sleight of hand: the Russian reaction to U.S. encroachment into Russia’s centuries-old influence in its near-abroad has been exploited to create an image of Russian expansionism and revisionism. Washington’s own expansionist policies have thus been sold to the U.S. public as necessary to defend the USA against Russian aggression—even though since the end of the Cold War there has been no recorded Russian threat against the U.S. homeland or its citizens.

Russian actions may have been correct or incorrect in particular cases (thus incorrect on the annexation of Crimea but obviously correct in opposing the U.S. invasion of Iraq and intervention in Libya), but they have been overwhelmingly reactive to those of the USA.

None of this should be read as a plea to vote for Donald Trump. Quite apart from his odious personal character, in the area of climate change alone— by far the greatest real challenge facing America, along with the rest of humanity—Trump’s stance, like that of most Republicans, should disqualify him from any high office. But international co-operation on climate change and any other important international issue (such as the fight against ISIS) depends on some measure of international harmony. And if the bipartisan Washington strategic consensus under a second President Clinton continues to counteract international co-operation by provoking serious crises with Russia (and China, for that matter), then Trump the clown will have had the last laugh.