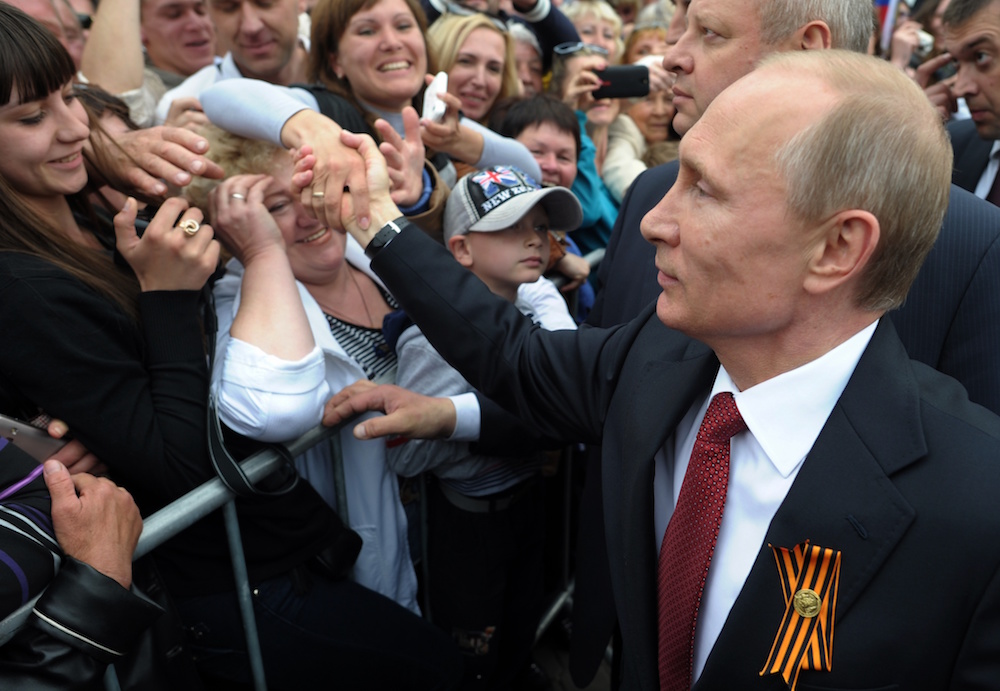 On Sunday, Sept. 18, millions of Russians went to the polls in national legislative elections that delivered Vladimir Putin’s United Russia party a decisive win, netting more half the popular vote and three-quarters of seats in the Duma, Russia’s parliament. Unlike five years ago, when tens of thousands of people stood out in the snow to protest for free and fair elections, there were few cries of fraud, and no discernible protests. Instead, Putin’s cause was aided by a low voter turnout that you can read as a sign of complacency, nonchalance, resignation, or tacit acceptance. Whatever the cause, it’s enough to infuriate Putin critics at home and (likely more so) abroad. Where’s the outrage? Where’s the opposition to Putin?

Mostly, it seems, not in Russia. And it may be time for those of us in the West to grudgingly admit that our Eastern friends like their leader. In fact, they seem to really, really like him.

To put this latest referendum in context, let’s think about all that’s happened between the Western world and Russia since 2011-2013, when anti-government protestors were last taking to the streets in droves.

In the interim years, there was the annexation of Crimea by Russia after its ally, Ukrainian then-president Viktor Yanukovych, was run out of office in Kiev. There were subsequent sanctions. There was action threatened, and sometimes taken, over dueling interests in Syria. There were the Sochi Olympics. There was the international outcry after Russia implemented anti-LGBTQ legislation. There were falling oil prices and athletic doping scandals. There was the passage of a law that allows civil society groups to be put on a list of foreign agents if they accept foreign money or are politically engaged (the list now numbers over one hundred organizations, including independent pollster Levada, which was targeted on the eve of the election). There was derision over Mitt Romney saying Russia was our greatest geopolitical foe. There was derision over Barack Obama saying otherwise.

Throughout, journalists have been harassed, and opposition figures silenced (and, in the case of Boris Nemtsov, killed).

… voting behavior [among Russian citizens] was likely influenced by a popular notion that Russia is surrounded by enemies—and that only a president like Putin and members of his party can protect them.

And still Vladimir Putin’s approval rating sits at 83 percent, up nearly 20 points from the time of his 2012 re-election. A fact that, again, is hard to face in certain quarters.

But, to quote Chekhov, “Mother Russia is vast,” and the vast majority of its people—including over a quarter who reside in rural areas—do not live in Moscow, St. Petersburg, or Vladivostok. They are divorced from the “foreign agents” and opposition figures of the cities, and want what so many people the world over want: To have enough money to eat and drink, enough to find a place to live, and to be left in a quiet peace. Whether we accept it or not, opposition to Putin is small and (at least geographically) contained. And those members who are not in jail or tired of arrest threats, like Soviet dissidents before them, cannot seem to agree on how to bring free and fair politics to Russia.

There may be something to the idea that Moscow’s persistent political persecution of the opposition and Putin’s high approval ratings are related, an opinion that’s been floated by America’s former ambassador to Russia Michael McFaul and echoed in a recent speech by President Barack Obama. And yet, to the extent that this criticism reaches ordinary Russians, it rarely influences their political outlook in the way Western elites intend.

We deride and mock Putin, and assume the Russian people should do the same. At the very least, we say, they would criticize him if they were free to do so. But Putin isn’t just popular because he keeps Russians from seeing alternate paths for themselves. He’s been able to gain and keep power because ordinary Russians saw themselves, and continue to see themselves, in him. They also see Putin as their protector. In the wake of the most recent election, the Moscow-based daily Vedomosti wrote that voting behavior was likely influenced by a popular notion that Russia is surrounded by enemies—and that only a president like Putin and members of his party can protect them.

In other words, when the West criticizes Putin— the man who stabilized Russia after a decade of discord, who told them they were great after the world told them they’d lost, who pointed out that Uncle Sam shouldn’t get to dictate how they live—the Russian people see us criticizing them. When we say that they only vote for Putin because they’re afraid or deluded, they may well feel not only insulted, but also justified in their political outlook. An outlook which will likely continue to be tied to how they perceive us perceiving them.

There are, to put it mildly, autocratic checks on civil society. And there are Russians who already want—and who have been arrested for, and who have died for—a freer, fairer society. But the fact is that many Russians won’t feel compelled to demand another choice so long as they see the necessity of a leader who will, first and foremost, be there to defend them from a hostile world. Tough talk like the American president likening their leader to a bored child slouching in the back of the classroom; the U.S. Congress cheering Russia’s isolation during a State of the Union address; or the leadership in Washington considering the Ukraine as an extension of the NATO alliance doesn’t boost Putin’s detractors—it only enshrines the problematic leader’s worldview.

In the technical language of political science, the calculus for many of the Russians who bother to go out to vote today boils down to this: Putin may be a bastard, but he’s our bastard. If Westerners really want to see his popularity wane, they best not give him justification to stay.