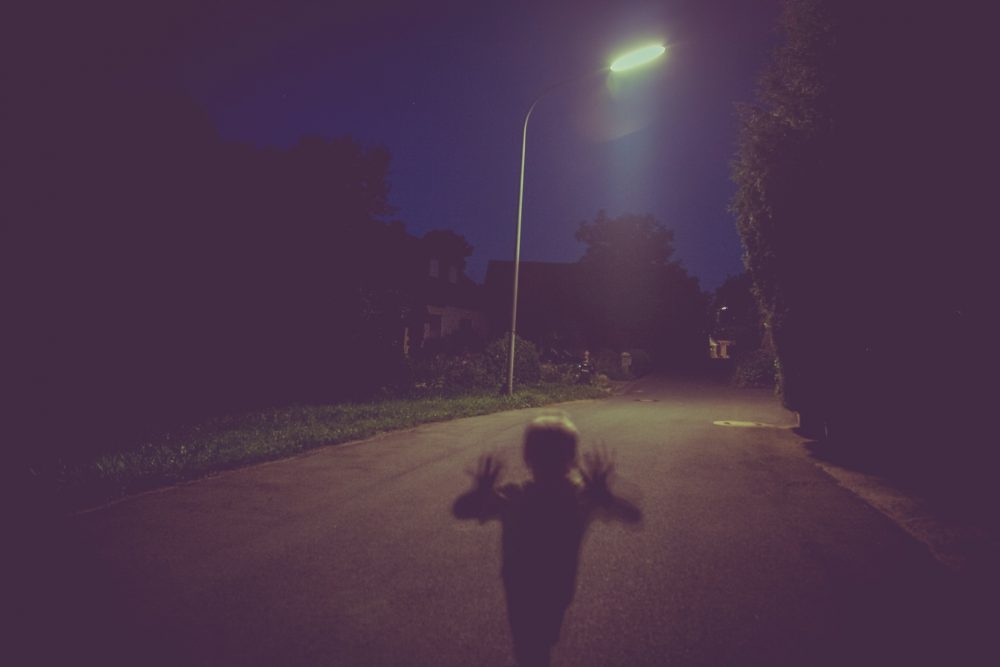 Rawhead and Bloody Bones
Steals naughty children from their homes,
Takes them to his dirty den,
And they are never seen again.
—Traditional Nursery Rhyme, Yorkshire, UK

Ours was a safe neighborhood. Postwar cinderblock cottages stood unlocked in the shade of date palms that in summer cluttered our yards with vinegary, fermenting medjools and at trimming time offered their branches to boys for secret forts and clubhouses. Older children ran wild until evening dinner call, extending their explorations far afield to distant canals and vacant lots, disobeying their parents by ditching their toddler siblings who, somehow, always found their way home.

When the sun went down, the world changed: Elongated shadows trembled on concrete sidewalks, inchoate shapes lurked in dark alleys, eldritch rustlings shook the oleanders, bogeys and bugaboos squatted in the drear corners of fenced yards, and nameless terrors crouched like gargoyles in the tops of trees. Malevolent phantasms swooped low, and things went bump in the night.

Such horrors were irresistible to the imaginations of nine-year-old boys. After dinner we would sneak outside, daring to confront the night in rites of passage that put our bluster and moxie to the test. Our most dangerous adversary was the Booger Man who wandered abroad in search of wayward children who stayed out after dark. It was said that he wore a black trench coat and a broad-brimmed hat that hid a face no one had ever seen. Venturing into the neighborhood’s most isolated enclaves, we invoked him in games that ended with imagined sightings and full-scale retreats to the safety of brightly lit front porches.

Psychologist Bruno Bettelheim tells us that children find a symbolic resolution of their fears in traditional fairy tales, where the monstrous is clearly delineated and escape is assured in Happily-Ever-After endings. Certainly, we were no strangers to the Grimms and Hans Christian Andersen, but our truest monsters in the Phoenix, Arizona of 1959 were those in our imaginations.

The Booger Man was one of these, but in time he proved too much an abstraction, lacking the intimate presence necessary to all ghouls who strive to terrorize the young. He was a faceless shadow lurking in the shrubbery and nurturing a dark agenda of “getting” whoever came within reach of his long, grasping hands. What he did when he got you was uncertain, for he was slow and easy to escape—no one, to our knowledge, had ever been gotten.

Literary great, and master of the macabre, Edgar Allan Poe personified our propensity for courting the unthinkable. In the Imp of the Perverse, he made us consider a malevolent goblin who whispers in our ear tempting us to stand on the edge of a cliff and consider the consequences of jumping. We may never follow through, but the exhilaration of pushing the envelope of sane thinking can lead us into the sublime. A supreme heightening of the emotions can be achieved though the contemplation of the horrific, said the 18th century philosopher Edmund Burke.

After a time, our encounters with the Booger Man no longer took us to this place, but we found a successor who himself had pushed the envelope, and paid a dire price for his hubris.

In our imaginations, the boy who had chosen to host our newest tormentor morphed into a vile, misshapen thing that lurched and clawed and slavered like a rabid dog.

In the late 1950s, the Kiva Theater in Old Town Scottsdale supplemented its usual fare of European art films with Saturday afternoon children’s matinees. On one of these Saturdays, after crawling through the aisles in search of fallen change and throwing melted M&M’S on the heads of unsuspecting viewers in the front rows, we watched First Man into Space, a science fiction/horror flick cheesy in premise and execution but filled with possibility for young adventurers who played games with the night.

It told the tale of a test pilot who flew higher than any man had flown before. Losing control of his craft, he bailed out into a suspicious cloud of extraterrestrial particles. Encrusted in meteor fragments and hideous to behold, he survived his re-entry and roamed the countryside in search of human blood. First, he broke into blood banks but afterwards pursued the citizenry, killing several before being brought down by clever scientists.

That night, the Booger Man went on sabbatical and First Man into Space made his debut. As with the rituals that called forth his predecessor, we sought him out in the neighborhood’s darkest recesses, wary of the moment when one of us would be possessed by the tortured soul of the test pilot who had disobeyed his superiors and ventured into the unknown. In our imaginations, the boy who had chosen to host our newest tormentor morphed into a vile, misshapen thing that lurched and clawed and slavered like a rabid dog. Arms outstretched, he came for us, and with a collective shriek of “First Man into Space!” we scattered once again for the sanctuary of our well-lit homes.

First Man into Space, like the Booger Man, faded into memory as we approached adolescence. But for a while he gave shape to our fears where his faceless counterpart fell short. Being “gotten”—the horrific consequence of succumbing to the temptations of Poe’s imp—was palpable in the bloodlust of an irradiated zombie with a backstory and a physical presence in a possessed victim. He joined a distinguished cadre of childhood terrors, such as La Llorona, the ghoulish Weeping Woman who abducts and drowns children who get too close to water, or the Mogollon Monster, the devourer of Boy Scouts who wander too far from their campsites after dark. Like the venerable English bogey Raw Head and Bloody Bones, they all were hideous, immediate, and supremely threatening—in other words, perfect for the dark play of children.

The allure of shadowy places and the creatures that inhabit them doesn’t end with childhood. Today the Booger Man’s cyber-cousin Slender Man lurks in both his home on the internet and the waking world, challenging millennials to participate in the dialogue between belief and disbelief that characterizes the urban legend.

Legend tripping—the visiting of haunted houses, cemeteries, and other locales connected to extraordinary or supernatural happenings—has long been popular with teens and young adults. If those of us who have left our childhood behind approach such experiences with an uneasy, obligatory cynicism, we would do well to think back to the joy of the screaming retreat to the safety of the front porch, and, when contemplating the question of “ghoulies and ghosties and long-leggety beasties,” hedge our bets by invoking the last line of a traditional Scottish prayer: “Good Lord deliver us.”