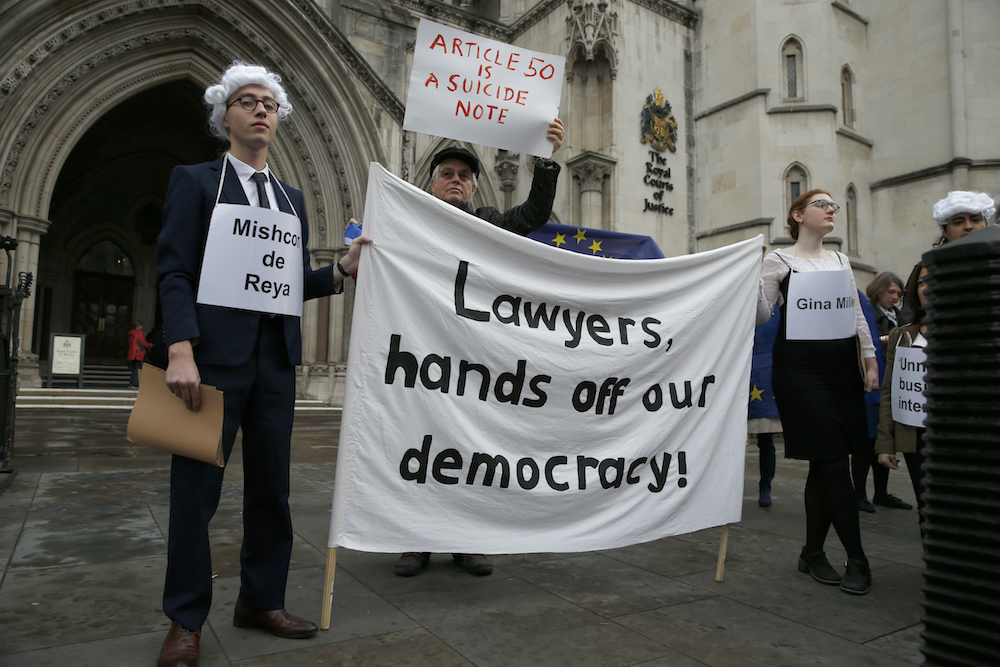 Donald Trump is America’s Brexit. Whoever wins the presidential election, Trump’s candidacy has made possible a level of public incivility that we’ve not seen in this country for many years. Racial epithets, demeaning comments about women, people with disabilities, immigrants, and refugees are back in the public discourse. Although many politicians raced to distance themselves from the recently-reported “locker-room” banter between Trump and a Bush family member, it’s also noteworthy that a surprising number of people have claimed these kind of private boasts, though distasteful, are normal—even acceptable and harmless.

What’s that got to do with Brexit? More than you’d think. When Britain voted early this summer to leave the European Union and go it alone, a large number of those who voted to leave did so explicitly because of concerns over immigration. Tensions ran high in the days surrounding the vote. Immediately following the result of the referendum, police all over the country noted a rise in racial hate crimes. Reports flooded in of foreigners being spat at and snarled at on Britain’s streets, and told to go back to where they came from. This hatred of other people, of those viewed as non-Britons, escalated on the night in late August when a gang of English youths murdered 40-year old Polish immigrant Arkadiusz Jóźwik as he was eating pizza in Harlow, just south of London, in what is widely suspected to be a hate crime. Perhaps most notoriously, on 16 June, a week shy of the vote, a man shouting “Britain first” shot and stabbed Jo Cox, a young Labour Member of Parliament. When he was asked in court a few days later to state his name, he replied: “My name is death to traitors. Freedom for Britain.”

Back on this side of the Atlantic, it’s been reported that supporters at Trump rallies have sometimes cried not just for jailing Hillary Clinton, but also for killing her. Trump’s own veiled threat of “Second Amendment” action at a rally in North Carolina in early August had many wondering whether he was inciting potential armed violence. Last year after a campaign rally in Alabama where several white Trump supporters assaulted a Black Lives Matter protester who interrupted the candidate’s speech, Trump responded on Fox News, “Maybe [the activist] should have been roughed up.” In March in St. Louis, Trump claimed “Part of the problem and part of the reason it takes so long [to kick protestors out of campaign stops] is nobody wants to hurt each other anymore.” And the list goes on. And on.

In both campaigns—the U.S. presidential bid and the U.K.’s European referendum—the movement of people from nation to nation, and the economic consequences of that movement, has played an outsized role. Whether it’s Trump complaining about Latinos or Syrian refugees, or the Leave campaign’s poster showing a seemingly unending line of dark-skinned migrants under the headline “Breaking Point” (a poster ironically released the same day Jo Cox lost her life), it’s once more acceptable to speak openly and disparagingly of immigrants, refugees, and of others who don’t “belong”–those who don’t look, or sound, or seem like a particular conception of what makes “us” as nations.

Brexit and Trump share values that have ignited a new era of hatred and intolerance—which neither side of the Atlantic can afford.

Trump visited Scotland (which voted overwhelmingly in favor of remaining in the European Union) the day after the U.K.’s June referendum. He said there were “great similarities” between the vote and his campaign, including that “people want to take their country back” and “they don’t necessarily want people pouring into their country.” His words echo not only those of the haters, but also of the woman who is now Britain’s Prime Minister, Theresa May. Just a year ago when she was Home Secretary and in charge of immigration policy, she declared at the annual Conservative Party conference that “millions” of people wanted to come to Britain, and that their presence would doom the economy, drive wages down, expand the criminal classes, and make it impossible to build a cohesive society. The speech was pure Trump (albeit delivered in complete sentences), though it was given at a time when few in the U.S. believed Trump could be a serious contender. In both countries, interestingly, the foreign-born residents—41 million in the U.S. and 8 million in Britain—amount to some 13 percent of the total population.

In both countries, this type of rhetoric reveals a regression in recent years that has brought open statements of intolerance and bigotry back into mainstream discussion, often in the name of freedom of expression. Hatred of difference has a long and always ugly history. It was only after 1945, with the horrors of Nazism fresh in people’s minds that derogatory commentary—whether about people of different backgrounds or religions, women, those with disabilities, or migrants—began to retreat from open conversation. Slowly but surely, it became less and less acceptable to make casual anti-Semitic, racist, or sexist comments in public. Instead, such expressions moved to the periphery, the province of fringe organizations and privately expressed antipathy.

But the pushback against migration in much of the industrialized world, fanned by manipulative politicians scapegoating outsiders for all societal woes, has allowed this bigoted talk to return to our political landscape in recent years. Trump and his counterparts around the world couch their blunt rhetoric, which often involves the denigration of difference, in the message that freedom lies in the ability to speak the unspeakable, and that political correctness has made us skirt around real problems and real frustrations that we ignore at our peril. For Brexit supporters, for those who stump for Trump, and for white supremacists and the Alt-Right, diversity has become the favored whipping post. And it’s not just speechifying. The murders of Jóźwik and Cox in the U.K. and the violence at Trump rallies are a painful testament to the dangers of this new manifestation of discontent. Just last week a Conservative MP asked his Parliamentary colleagues how Britain could be made great again, echoing not only Trump’s campaign slogan but a speech delivered in 1950 by a young Margaret Thatcher.

The night before the referendum last June, Nigel Farage, leader of the ultranationalist U.K. Independent Party (UKIP) and a major architect of the Leave campaign, stated in a speech that his opponents had “lost faith in their country.” When Trump, as he will surely do, invokes his “Make America Great Again” slogan the night before our own election, we can only hope that his strikingly similar sentiments don’t seal this country’s fate for the coming years too. Brexit and Trump share values that have ignited a new era of hatred and intolerance—which neither side of the Atlantic can afford.