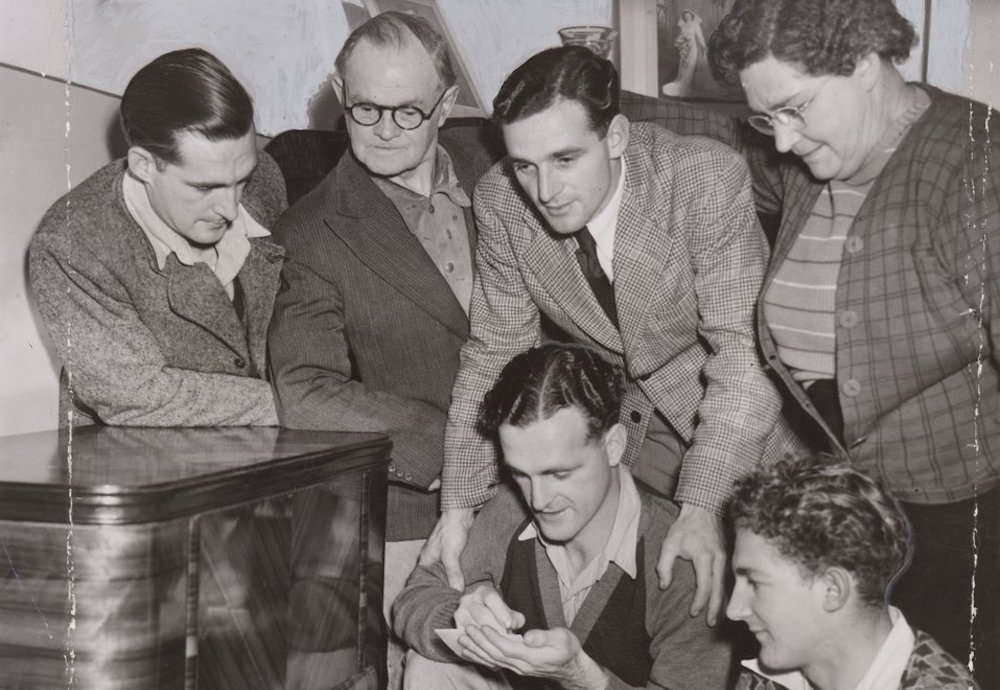 The digital age, we are told, has made media more immediate, more democratic, more visceral than what came before.

I have my doubts. Was there ever anything more visceral than the radio of the early 20th century?

When I was a child in the Los Angeles of the 1930s, our family never missed a broadcast of The Lone Ranger, and the introduction, always accompanied by Rossini’s William Tell Overture, is still fixed in my mind.

“A fiery horse with the speed of light, a cloud of dust and a hearty Hi-Yo Silver! The Lone Ranger! With his faithful Indian companion, Tonto, the daring and resourceful masked ride of the plains led the fight for law and order in the early western United States. Nowhere in the pages of history can one find a greater champion of justice. Return with us now to those thrilling days of yesteryear. From out of the past come the thundering hoofs of the great horse Silver! The Lone Ranger rides again!”

Then one evening father looked up from his newspaper and told us of a disconcerting news item he’d just read. The actor who played our hero had fallen asleep at the wheel of his auto and died in the ensuing crash. The date was April 8, 1941. I was 10.

The news did not end our fascination with the radio. To the contrary, it deepened it. The death left us children consumed with curiosity—what would happen to our radio hero? For weeks we tuned in to find out. For several programs the storyline was that the Lone Ranger was critically ill and unable to speak above a whisper. When he recovered a new actor, Brace Beemer, had taken over the role. His powerful voice, whose immediacy I still feel all these years later, was the voice we all came to associate with the Lone Ranger, until the 1954 demise of the series.

Radio’s democratic spirit marked a revolutionary leap from all that had come before it. Suddenly all of us could enjoy performances once reserved for privileged live audiences in a theater. And contrary to TV, there is something egalitarian about a medium in which voice, coupled with your imagination to make of it what you will, is king. It didn’t matter what people looked like or what they wore.

The radio served children well. Let’s Pretend, billed as “radio’s outstanding children’s theater,” was broadcast on Saturday mornings and featured stories taken from old fairy tales, played out by child actors, from the brothers Grimm and the Arabian Nights.. It ran from 1934 to 1954 but I was a listener in 1939 and 1940. Cream of Wheat sponsored the program and its theme song became so familiar that in time I memorized it:

Cream of Wheat is so good to eat;
Yes, we have it every day.
We sing this song, it will make us strong
And it makes us shout HOORAY.

Makers of that era’s radio programs weren’t afraid to produce shows that were smart or educational. Quiz programs were particularly popular, from the highbrow “Information Please,” to “Double or Nothing.” Regular panelists on such shows included the journalist John Kieran, the pianist-composer-comedian Oscar Levant and the intellectual Clifton Fadiman. I particularly enjoyed their extemporaneous witticisms. When one guest identified Reza Pahlavi as the Shah of Iran, Fadiman asked, “Are you shah?” The guest John Gunther, instantly replied, “Sultanly.”

Dr. I.Q. was a popular quiz show that took its questions seriously. Seven microphones were manned by program assistants stationed throughout the theater looking for contestants. Occasionally an assistant would announce, with a hint of impropriety, “I have a lady in the balcony, Doctor.” The fast pace of the show kept it from boring listeners. It was sponsored by Mars candy and if a contestant could not answer a question, they received sincere condolences, “I’m sooooo sorry, but a box of Dr. I.Q. candy to the lady.”

Gangbusters, a program produced “in cooperation with police and federal law enforcement departments throughout the United States,” was a precursor to a genre that remains a TV mainstay to this day. Adding a measure of authenticity was the name of Col. H. Norman Schwartzkopf of the new Jersey State police who became prominent for his role in the investigation of the kidnapping of the son of Charles Lindbergh—his son would become famous half a century later for leading U.S. forces in the Gulf War. The broadcasts began with a blast of a policeman’s whistle, shuffling feet, a breaking window, a ringing burglar alarm, a police siren and the sound of a firing machine gun. The Shadow told of the adventures of Lamont Cranston who had a talent for making himself invisible—literally. “Who knows what evil lurks in the hearts of men? The Shadow knows!” The show was a particular favorite of children, including this one. Other notable crime fighters were The Green Hornet (whose theme song was Rimsky-Korsakov’s “Flight of the Bumblebee”), Calling All Cars, Charlie Chan and Dick Tracy.

I had a low tolerance for horror stories. One program I avoided after listening to a few was The Hermit’s Cave. The narrator came on and to the background of howling winds, said, “Ghost stories, weird stories, and murders, too. The Hermit knows them all. Turn out your lights. Turn them out!” It sent chills up my spine before the narrative had even begun.

Radio’s democratic spirit marked a revolutionary leap from all that had come before it. Suddenly all of us could enjoy performances once reserved for privileged live audiences in a theater.

I preferred comedies; radio invented the situation comedy, long before the genre became a TV staple. Among them were Fibber McGee and Molly of 79 Wistful Vista. Fibber exaggerated a lot. The mayor of the town he lived in was named La Trivia and a leading citizen bore the name Throckmorton P. Gildersleeve. Listeners never tired of the moment in each show when McGee opened his closet door and a cascade of rubbish tumbled out. It was a standing gag.

Many comedians had radio shows. Red Skelton, Fred Allen, Abbot and Costello, Eddie Cantor and Jimmy Durante were just a few. But my favorite was Jack Benny. Benny had a repertory company that included Eddie “Rochester” Anderson, singer Dennis Day, bandleader Phil Harris, and announcer Don Wilson. Benny himself was the butt of many jokes that included his penny-pinching personality. One bit of schtick had a robber approach him and say. “Your money or your life.” A long pause followed. When the robber became impatient, Benny retorted with, “I’m thinking. I’m thinking.”

A program I looked forward to listening to was the Lux Radio Theater hosted by Hollywood director Cecil B. de Mille. He had an unmistakable voice that introduced the program with “Greetings from Hollywood, ladies and gentlemen.” The program presented movies without film, featuring well-known actors—Clark Gable, Barbara Stanwyck, Bette Davis, and James Stewart.

Symphonies were radio staples. The NBC Symphony Orchestra under the direction of Arturo Toscanini broadcast from 1937 until 1954. The Boston Symphony, The Cleveland Symphony, the Philadelphia and the Detroit Symphony orchestras were also broadcast. My introduction to classical music was listening to the Saturday night broadcasts of the Chicago Theater of the Air presenting operatic works like The Vagabond King, Madame Butterfly, Carmen, The Merry Widow. Robert McCormick, publisher of the Chicago Tribune, introduced the works.

Radio listeners of the 30’s learned that New York City was a uniquely spectacular place. Grand Central Station, broadcast on Saturday mornings, had me convinced with its opening:

As a bullet seeks its target, shining rails in every part of our great country are aimed at Grand Central Station, heart of the nation’s greatest city … (Train sound, ssssss) … Grand Central Station! Crossroads of a million private lives! Gigantic stage on which are played a thousand dramas daily!

The stories that followed were mostly forgettable. But I never forgot the introduction. I finally visited New York—many years later, and first on my list of places to see was Grand Central Station.

I was not disappointed.