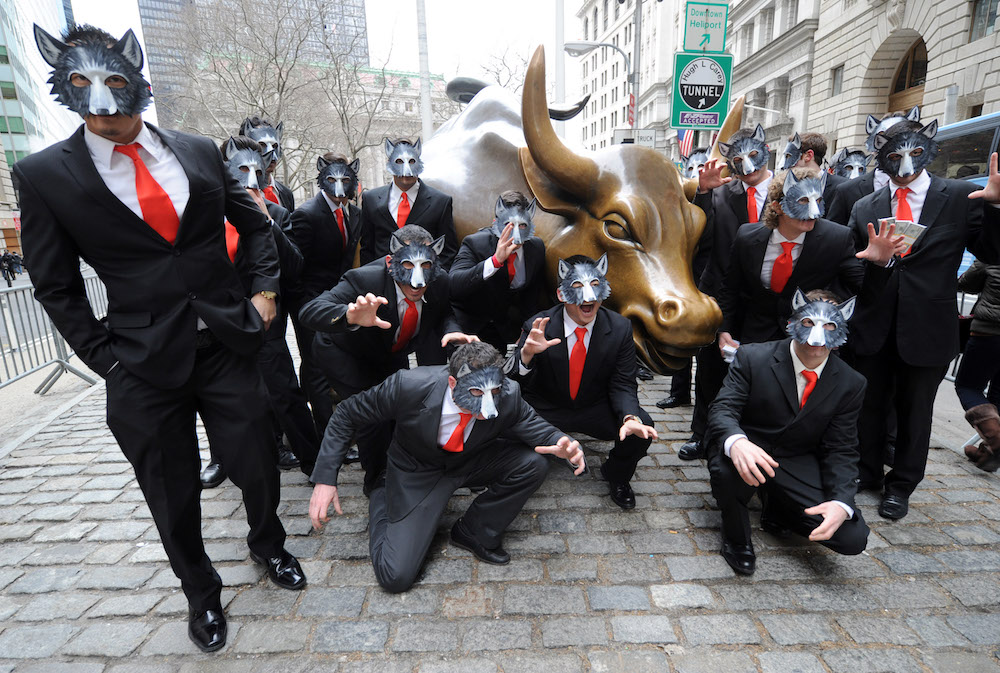 A pack of “wolves” surround the Wall Street Bull in 2014 in a nod to the hit movie The Wolf of Wall Street. Photo by Diane Bondareff/Invision for Paramount Pictures/Associated Press.

You should be celebrating the fact that the stock market is soaring.

I fear that with all the politicized talk of “Wall Street” and the images that shorthand conjures up in our minds of rapacious bankers and hedge fund managers, we’ve lost track of what the stock market is really all about. A bright young colleague of mine recently said she’d put a little money in the market, had seen it appreciate, but was now feeling a bit guilty about her “blood money” and wanted to cash out.

I fear her disdain is common among millennial progressives, who aren’t likely to break out in celebration if and when the Dow Jones Industrial Average breaks through the 20,000-point milestone it has approached in recent weeks. A Gallup survey last spring reported that only 52 percent of respondents had any money (or a spouse’s money) invested in the stock market, the lowest percentage in several decades.

That’s a shame. The stock market is not only a barometer of our nation’s business ingenuity, it’s also a testament to our shared commitment to a meritocratic form of participatory democracy.

I was reminded of this reading Shoe Dog, Phil Knight’s engaging and refreshingly candid memoir. The Nike founder recounts how financially stressful the company’s early days were, not only at the very beginning but well after it had become apparent that consumers craved Nike’s revolutionary running shoes, and the company was doubling its sales every year. The trouble was, the faster the scrappy Oregon-based competitor to the Adidas behemoth grew, the more nervous its bankers became, having to finance Knight’s vision “on the float,” paying the costs for each new product cycle before their revenue came in to cover the bills. The only answer, which Knight resisted until 1980, was to raise capital by going public; only then was Nike’s long-term success assured.

The stock market enabled the swoosh to eclipse Adidas as an iconic global brand, giving consumers more choice and, yes, making Knight and those who chose to back him billions of dollars in the ensuing decades. And now the stock market is the only reason scrappy Under Armour has itself been able to scale up to take on what it considers—as Knight once considered Adidas—the dominant but unimaginative incumbent in the industry based in Oregon. The market’s wonderfully subversive that way.

It’s become a political trope to talk about the distinction between “Wall Street” and “Main Street” but what a stock market allows is for the most worthy ideas from Main Street to grow and succeed. Think what you will of the bankers on Wall Street, but the market is really about whether we will all be able to benefit from the inspiration of a Phil Knight or a Steve Jobs, and those who will improve upon what they have done.

The stock market is not only a barometer of our nation’s business ingenuity, it’s also a testament to our shared commitment to a meritocratic form of participatory democracy.

Knight’s initial hesitation to going public—the significance of the phrase itself is worth appreciating—arose from the same reason the rest of us should appreciate the stock market and seek to preserve its central role in our economy. He understood that once a company trades its shares on the market, it is accountable to the public. In exchange for being able to raise money from perfect strangers like you via your pension fund or 401(k), companies listed on the stock market are forced by landmark New Deal era legislation to embrace a radical degree of transparency, reporting quarterly results and any reverses they suffer along the way. Their managers, meanwhile, become directly subservient to outside shareholders. Knight had no choice but to embrace such transparency—his parents were not in a position to lend him millions of dollars to bankroll his company’s growth.

Which brings us (sorry) to Donald Trump. Our president-elect’s personal story, business practices, and worldview don’t reflect the ethos of the stock market. Indeed, the opaque and dynastically-run Trump Organization is the antithesis of a democratic, publicly-traded company.

It’s a fun mental exercise to imagine Trump having to navigate the challenges of running a publicly-traded company all those years, if he hadn’t been able to take the aristocratic route of being financed by his father, around the same time that Knight was having to access the public market. Imagine Trump having to report each quarter to pesky journalists, analysts, and institutional investors how the company was faring, and why. Imagine him having to file public disclosures about all his vindictive litigation, and having to address pointed questions about why the CEO of a modestly-sized company was flying around in a 757, and appointing relatives to run various divisions, not to mention tarnishing the company’s brand by disparaging Latinos, Muslims, women, and plenty of other Americans.

Who knows, maybe Trump’s company, thus cured of its cult of personality, would have become a more formidable enterprise, one more closely resembling its creator’s hyperbole. Trump himself would have been long deposed, or long-since reformed into a person better qualified to represent and work on behalf of competing stakeholders and interests in a strategic manner—better qualified, that is, to be President of the United States.

Of course the stock market is far from perfect. Capitalism entails risk, and for every windfall pension funds or individual investors reaped investing early in the likes of Microsoft and Nike, plenty of money has been lost backing bad ideas. You’re smiling now if you bought into Facebook when it started trading publicly and frowning if you invested in Twitter. But who’s to know where each will be in five years? And worse than the speculative uncertainty inherent in stock investing is the recurring sense, triggered by accounting and insider trading scandals, that the market may be rigged by people in the know.

Yet for all the scandals that have afflicted Wall Street, our system is far more efficient at funding worthy ideas to spark innovation and create jobs than any secretive and closed Trumpian world ever could be, where equity can only be raised from family, immediate associates, or a bank loan officer. Our system, with its relentless insistence on transparency and disclosure, is also far better at minimizing fraud. The rule of law and a certain level of social cohesion are key prerequisites for a system in which people are willing to fund ventures beyond their immediate circle; it’s no accident the first functional modern stock market was established in the cosmopolitan, relatively tolerant and egalitarian Dutch Republic, as opposed to a more static, dynastic society. And it should be a source of pride to Americans that our stock market remains the envy of the world. It’s easy for less open societies (see China) to open their own stock markets, but these don’t require the same level of transparency of listing companies, or protect the rights of minority shareholders to the degree ours does, which is why the best companies from those countries still yearn to be listed in our stock market.

The stock market shouldn’t be a partisan issue. It’s a shame that progressives don’t balance their justified outrage at some of Wall Street bankers’ excesses with an acknowledgment of the democratic essence of an accessible stock market that allows entrepreneurs and innovators to fund their companies and take on complacent incumbents. Without dynamic equity markets, our economy would be dominated entirely by private companies like the Trump Organization and business tycoons who inherited their dominant position. It’s a shame that President Obama hasn’t felt more comfortable explaining the market’s meritocratic ethos and applauding his own results in tripling the stock market’s value since its recession lows in the early days of his administration. It’s a shame that politicians from both parties spent this entire populist-tinged election cycle bad-mouthing the market, making millions of younger Americans like my colleague feel like they should stay away, or feel guilty if they don’t.