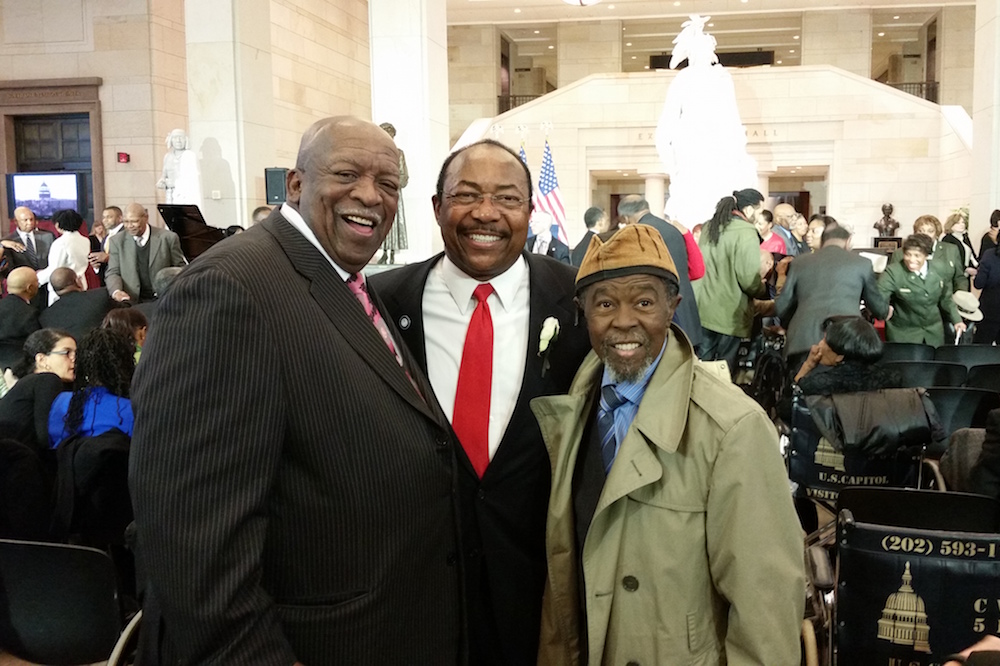 A Biblical passage, Luke 12:48, states to whom much is given much is required. That is the attitude I have taken since I learned that I was given the gift of Dr. Martin Luther King, Jr.’s voice.

It was not a skill that I developed. I woke up one day and realized I could speak in the same rich voice, with the same baritone and rhythm that Dr. King used. I have never been sure that I would always have this ability, but miraculously it has not wavered. I started in 1969, a year after King’s death, and have been quoting and performing his speeches for 47 years.

I’m now 71, well beyond the 39 years King lived, but I remember well the first time I performed my rendition of a Dr. Martin Luther King, Jr. speech, at the Dootsie Williams Dooto Music Center on Central Avenue in Compton. At the time, I was employed by the Compton Fire Department (and was the only black person in the department) and was moonlighting as the chauffeur for Compton Mayor Douglas F. Dollarhide. While I drove him around, I recited the “I Have a Dream” speech for him, attempting to sound like Dr. King. He liked it well enough to suggest putting me on the program as a speaker at the annual NAACP banquet in 1969.

I prepared by listening, over and over, to an LP of Dr. King’s speeches. That first time in 1969, I gave the “I Have a Dream” speech. It was unlike any experience I’d had before. When I spoke, I felt Dr. King’s presence, as though it wasn’t me doing the speaking. Instead, he was speaking through my body. I was merely the instrument the sound came from. I had real goose bumps when I finished.

The speech received a standing ovation. People told me that they thought Dr. King had come back from the grave. They said I looked like him and I sounded just like him. From that night on, I have been reciting his speeches. People respond as though I were him. On occasion, after a performance, people have talked to me or treated me as if I were Dr. King. This is humbling, but it doesn’t feel like a burden. It’s joyful.

My ability is God-given, and it is also—I believe—a product of where I’m from. I grew up in Linden, Alabama, the third of 12 children, and I experienced segregation and integration first hand. I drank from a “colored” water fountain, used a “colored” restroom, and rode in the back of the bus. My younger brother Richard was the first student to integrate Linden Elementary School, and after his first day of school, the Ku Klux Klan came to our home and burned a cross in front of our yard.

After graduating from Linden Academy, the black high school in Linden, I enrolled at Selma University. In 1963, John Lewis, now a Congressman, came to my dorm to recruit students to join the civil rights movement. One way he motivated us was by telling us that Martin Luther King, Jr. was coming to town and we needed to get involved. He told us that we were the ones who would benefit from civil rights, and our children would also be the benefactors. My father warned me not to get involved; he said he sent me to school to get an education, not go to jail. But I, like many other students, joined anyway. I protested and was arrested with Lewis, Dr. King, and others in front of the federal court building in Selma.

When I spoke, I felt Dr. King’s presence, as though it wasn’t me doing the speaking. Instead, he was speaking through my body. I was merely the instrument the sound came from.

In studying the life of Martin Luther King, then and since, I learned one of his most important lessons: In life, there is no crown without a cross. Some people will demonize you and put down your efforts when they don’t like what you do. Dr. King preached and lived that it is God’s will that we look out for the poor and the least among us. When we do this, we should expect confrontation, false accusations, and lies. Some people, such as Dr. King himself, have to face physical death to free others from a permanent psychological death.

Facing lies and danger is not new to our current times; Dr. King taught that pain and misunderstanding are to be expected when fighting injustice. The hardships he endured took a toll on him, but did not discourage him from continuing to preach love and pursue justice.

I have the comfort and honor of sharing King’s voice with people of all backgrounds, ages, and religious affiliations; it is work with particular resonance this time of year, as we celebrate his birthday. I have been pleasantly surprised at how children respond to the recitation of King’s speeches. I’m amazed at their attention span. Even when I’m done they ask for more. There is something about Dr. King’s spirit, determination, and passion for justice that even kindergarteners and first graders get. This brings me immense joy.

Older students respond too. When I taught Civil Rights and the Law at California State University Long Beach in the 1990s, I started each class with a short recitation from Dr. King. My students would come to class a few minutes early to be sure not miss it.

I love all of Dr. King’s speeches—especially “We Shall Overcome” and “I Have a Dream.” But my favorite is a lesser-known address, what I call the “Excellence Speech.” He shared versions of it several times—in Philadelphia in 1960, in Jamaica in June 1965 and at Glenville High School in Cleveland, Ohio on April 26, 1967. He argues that, despite the very real scars that discrimination leaves, racism cannot be an excuse to retreat from the pursuit of excellence. To the contrary, King argues, black people “must set out to achieve excellence in our various fields of endeavor.”

I can wake up in the middle of the night and recite it to anyone who calls.

At the ripe age of 71, I believe that much was given to me in the gift of Dr. King’s voice, but much is still required. I continue to perform his speeches—this week I will deliver excerpts at the Dr. Martin Luther King, Jr. Library in the city of Carson near Los Angeles. It is one of the greatest feelings in the world when listeners share how meaningful a speech is, and how I sound just like Dr. King. In my small way, I hope to help his dream live on.