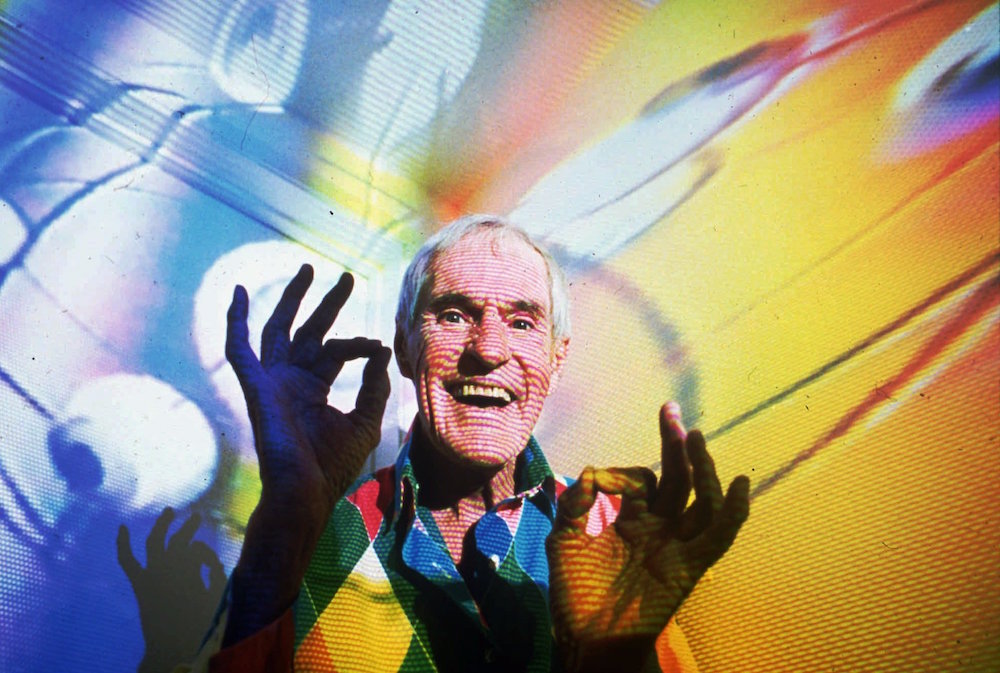 Timothy Leary, the former LSD experimentor turned computerized hallucination designer, in his Beverly Hills home in 1992 with video images from his show projected over him. Leary, who suffered from cancer, died in 1996 at 75. Photo courtesy of Associated Press.

In the fall of 1965, a 33-year-old father of three named Arthur King—a patient in the alcoholics ward at Baltimore’s Spring Grove Hospital—swallowed an LSD pill and lay back on his bed in a special unit called “Cottage Thirteen.” Sanford Unger, the chief of psychosocial research at the Maryland State Psychiatric Research Center, knelt beside King’s bed, holding his hand and reassuring the patient as he started to feel the drug’s mind-altering effects.

This was not a normal psychotherapy session. During his 12-hour experience, designed to help stop his destructive drinking habit, King sat on the edge of the bed and looked at the photo of his son that he’d brought. Suddenly, the child became alive in the picture, which initially frightened him. Then King noticed that a lick of his son’s hair was out of place, so he stroked the photo, putting the errant strands back in place. His fear vanished. Later, Unger held out a small vase with a single red rose. King looked at the flower, which seemed to be opening and closing, as though it were breathing. At one point, Unger asked him whether he’d like to go out to a bar and have a few drinks. King didn’t say anything but was shocked when the rose suddenly turned black and dropped dead before his eyes. He never picked up another drink.

Arthur King was one of thousands of research subjects who were given LSD, psilocybin, and mescaline as therapeutic tools in the 1950s and 1960s, often with government support and with promising results. But by the time King was enjoying his sobriety, the backlash against psychedelic testing had already begun. By the mid-1970s, the legal exploration of the therapeutic benefits of psychedelic drugs was over.

This research is only now gathering momentum again in a new wave of U.S. clinical trials into other drugs with psychedelic properties. In recent years, university administrators, government regulatory agencies, and private donors have begun giving the stamp of approval and the money needed for new and expanding research into the use of MDMA, also known as ecstasy, and psilocybin, the active ingredient in magic mushrooms. In 2017, for instance, the Heffter Research Institute and the Multidisciplinary Association for Psychedelic Studies, two organizations leading the psychedelic psychotherapy revolution, will begin a final round of government-approved clinical trials in which hundreds of new patients with post-traumatic stress disorder, depression, and severe anxiety will undergo therapy sessions fueled by MDMA and psilocybin. Now, as we enter into a new age of experimentation, it’s worth looking back at the route that got us here.

LSD’s effects were discovered in 1943 by Swiss chemist Albert Hofmann, who accidentally dosed himself and was amazed by the powerful psychoactive effects of a drug he had labeled LSD-25. Hofmann had been working with ergot, a rye fungus, hoping to develop a new and improved cardiovascular stimulant. His employer, Sandoz Laboratories, soon made the drug available to doctors and researchers, advertising it as a tool to better understand psychosis and to possibly help patients in psychotherapy. The first wave of American psychedelic drug research—secretly funded by the CIA and the U.S. Army—began in Boston in 1949. By 1951, U.S. intelligence reports revealed that the Soviets had purchased 50 million doses of LSD from Sandoz. That discovery kicked off a decade of bizarre and sometimes horrific U.S.-sponsored research into the use of psychedelics as chemical weapons. There were tests to see whether LSD could be used as a truth serum or possibly be sprayed on enemy troops as a kind of weapon of mass distraction.

Meanwhile, brain scientists and psychotherapists were conducting more socially beneficial experiments in laboratories and medical offices around the world. Through the 1950s and 1960s, more than 1,000 research papers were written about LSD, psilocybin, and other psychedelic drugs. Some 40,000 subjects were given these mind-expanding agents, and great progress was made in the understanding of how they might help people suffering from depression, alcoholism, and the psychospiritual distress that often comes with the diagnosis of a life-threatening illness.

Researchers in Canada and the U.S. showed that psychedelic-assisted psychotherapy could be more effective in treating alcoholism than existing treatments, including the 12-step program of Alcoholics Anonymous. In the late 1950s and 1960s, even AA co-founder Bill Wilson advocated the cautious use of LSD, experimenting on himself and a small circle of friends. Theologians and psychologists studied how psychedelic drugs could inspire creativity and evoke life-changing mystical experiences in healthy volunteers.

On the East Coast, a Harvard University researcher dosed seminary students with psilocybin to show that the active ingredient in magic mushrooms could inspire an authentic religious experience. On the West Coast, the International Foundation for Advanced Study in Menlo Park, California, did research indicating that LSD could be used to improve cognitive functioning and problem solving.

By 1963, however, these drugs had escaped from the carefully controlled domain of the researcher’s laboratory and psychotherapist’s office. Millions of baby boomers were coming of age and starting to experiment on their own with LSD, magic mushrooms, peyote, and other hallucinogens. A charismatic Harvard University psychologist named Timothy Leary reinvented himself as the “high priest” of the psychedelic counterculture. In California, a promising novelist named Ken Kesey gathered a Dionysian troupe of Merry Pranksters and put on a series of huge parties called acid tests, where revelers dosed themselves and danced to a new band called the Grateful Dead.

By the end of the decade, LSD and other psychedelic drugs, along with marijuana, were linked in the public imagination with the 1960s counterculture, the antiwar movement, the crusade for sexual liberation, and the rising popularity of Eastern mysticism, yoga, and meditation. It was the decade of sex, drugs, and rock ’n’ roll. President Richard Nixon called Timothy Leary “the most dangerous man in America.” His administration’s crackdown on psychoactive drugs became part of a broader political reaction against the liberation movements on the 1960s. Leary’s mantra of “turn on, tune in, drop out” was seen as a direct threat to the corporate establishment and the consumerist, materialist mindset.

LSD’s discovery kicked off a decade of bizarre and sometimes horrific U.S.-sponsored research into the use of psychedelics as chemical weapons, a truth serum, or even as a weapon of mass distraction that could potentially be sprayed on enemy troops.

In the 1970s news of the destructive, sinister research conducted in secret by the Army and the CIA began to get out. Back then, one of my first major stories as a young San Francisco journalist detailed how one of these tests, dubbed Operation Third Chance, destroyed the life of a U.S. solider who was falsely accused by being a spy, given massive doses of LSD, and “interrogated in a hostile environment.” Back in 1953, one Army scientist who specialized in biological warfare, Frank Olson, killed himself (or according to some conspiracy theorists, was murdered) following a psychotic incident that may have been exacerbated by LSD.

The crackdown on both recreational and therapeutic use of psychedelics was not simply a political reaction. It was part of a broader re-examination of the loose standards applied to all kinds of drug research in the 1950s and early 1960s. Today, there is a greater appreciation for the rights of patients and research subjects to be fully informed of the potential dangers and side effects of these compounds. LSD was and is an unpredictable tool when used carelessly—a fact that was discovered by both CIA operatives and counterculture crusaders.

These consciousness-raising substances are finally coming out of the drug culture and into the mainstream laboratories of universities and medical centers. Researchers are building on the findings from the first wave of research. Today, scientists and therapists are more cautious in their screening of patients and the use of double-blind, placebo-controlled research to try to separate the effects of the psychedelic experience from other therapies patients get. More emphasis is placed on follow-up work to integrate the insights from psychedelic drugs into one’s everyday life.

Over the last several years, I’ve interviewed scientists, therapists, and patients involved in this new wave of research into psychedelic-assisted psychotherapy. There was Nigel, a U.S. Marine and MDMA patient who’d struggled with psychological demons since returning from the war in Iraq; Carroll, a hardcore drunk who got her life back following treatment with psilocybin; and Richard, a cancer patient who was treated for depression at Johns Hopkins.

Their stories illustrate how the powerful mind-altering effects of these drugs—along with the gentle guidance of trained therapists—can lead to real psychological healing, often accompanied by experiences of oneness, awe, and wonder that are traditionally associated with dreams or religious excitation. Exactly how these substances work remains a mystery, but to my unscientific mind, it has something to do with the loosening of the ego and the opening of the heart.

What’s happening in many of these experimental circles is the coming together of psychology and spirituality. Even the self-proclaimed secularists in the psychedelic-assisted psychotherapy movement employ rituals that draw from Native American shamanism and the sacramental rites of the Roman Catholic Church. Atheists pound on drums and ring Tibetan Buddhist bells. Medical doctors with priestly decorum present MDMA and psilocybin pills to patients in special chalices.

Advocates of both the therapeutic and the spiritual use of psychedelics are already celebrating the start of the “post-prohibition era.” That party may be a bit premature, but the government crackdown in the 1970s and 1980s on scientific research and personal use of psychedelic drugs has certainly declined. Marijuana may be the model for changing attitudes and public policies about LSD, magic mushrooms, ecstasy, and other psychedelic drugs.

But much will depend on how all this will play out in the administration of President-elect Donald Trump. It’s not hard to see how the psychedelic research could, once again, be slowed by a renewed “war on drugs” by such hard-liners as Alabama Sen. Jeff Sessions, the man Trump wants to serve as the attorney general. On the other hand, decisions about the medical use of these compounds by the Food and Drug Administration are supposed to be based on science, not politics, and the Veterans Administration is desperately seeking new treatments for returning soldiers suffering from PTSD.

For Arthur King, the positive effects of LSD-assisted therapy are undeniable. King, whose story was first told in a 1966 television documentary produced by CBS News, was tracked down decades later by filmmaker Dennis McDougal. In 2009, Arthur was still sober and married to the same woman who helped him through his battles with the bottle. King was asked to look back and assess the long-term impact of psychedelic psychotherapy. He didn’t mince words.