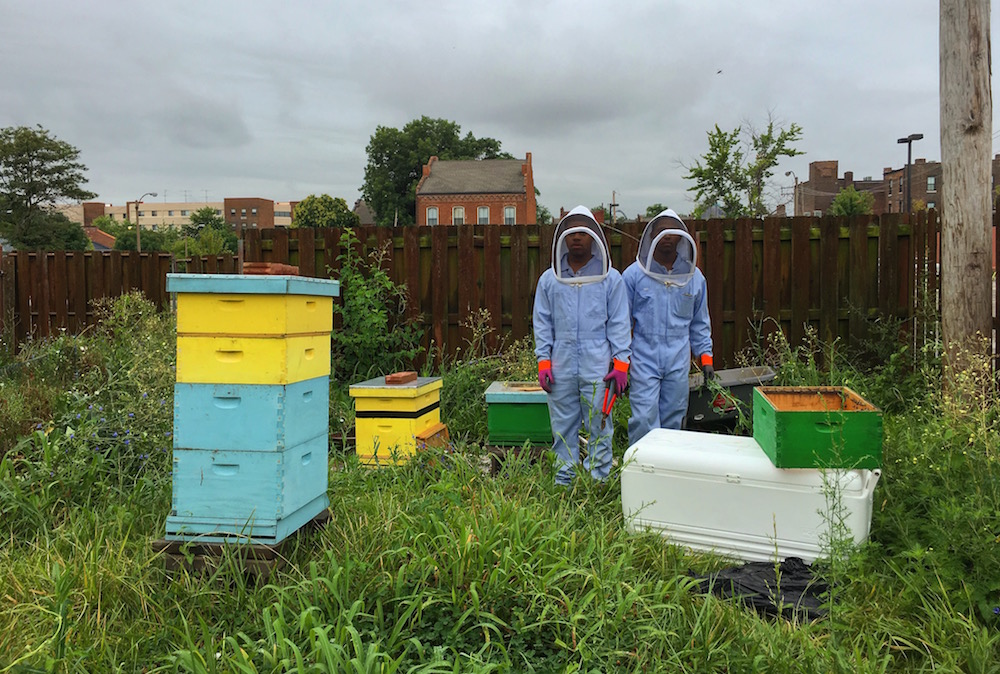 A bee sanctuary, inspired by a forest that overtook the site of a long-shuttered housing project, provides summer jobs for youth in St. Louis, Missouri. Photo courtesy of Juan William Chávez.

The plight of public housing projects conceived with the best of intentions and then failing horribly is by now well-known in communities across America. Less known—and still unfolding—is the story of what happens next, both to the people who lived there and the physical spaces those projects inhabited.

As an artist and cultural activist in St. Louis, Missouri, I’ve long been interested in the relationship between physical space and the needs of people and communities—in what works and what doesn’t. About a decade ago, I began focusing this question on the site where once stood Pruitt-Igoe, one of America’s most notorious public housing failures.

The project, named for Wendell O. Pruitt, an African-American fighter pilot in World War II, and William L. Igoe, a white former U.S. Congressman, was completed in 1954. It was located just two miles northwest of the Gateway Arch, and envisioned as one of the nation’s most ambitious attempts to address urban squalor. Its 33 highrise apartment buildings, with 2,870 units, were designed by Minoru Yamasaki, who went on to design the World Trade Center in New York City.

But the project was plagued with problems from the start, both in its design and in its profound inadequacy in addressing the economic, social, and demographic needs of residents. By the early 1970s, most of the buildings were uninhabitable, their hallways vandalized and their windows broken. In 1972, they were demolished via a spectacular, widely televised implosion that soon came to epitomize the failed trajectory of public housing nationwide.

Over time, and years of neglect, the vast vacant lot that was once the Pruitt-Igoe projects transformed into what I came to think of as the Pruitt-Igoe forest. In 2009, I was working on community-based art projects in North St. Louis. On my drive to work, I regularly passed the Pruitt-Igoe forest. Viewing it from the street, I daydreamed about what might be inside. At first, the forest seemed intimidatingly abandoned and potentially dangerous, but before long it beckoned me. I entered on foot to take photographs. I walked on weather-worn asphalt and saw overgrown weeds sprouting from dirt mounds, with bits of gravel, brick, and crushed concrete. Mosses revealed the vague outlines of old streets. There were a variety of native plants, and oak and hickory trees. I saw hawks, owls, rabbits, and deer. I had thought I would find the remains of a past civilization, but to my surprise I saw the beginning of a new community. This undisturbed vacant lot had become a sanctuary for an entire ecosystem.

I started thinking about Pruitt-Igoe’s mission. The development had been created to foster community. Could it somehow return to that function? Did any community exist at Pruitt-Igoe now? One day, as I photographed some bees pollinating a patch of native flowers, it hit me: These buzzing insects were Pruitt-Igoe’s new community. Bees and St. Louisans were in a similar situation. St. Louis’s population had fallen to its lowest in a century. At the same time—for reasons ranging from the use of pesticides and industrial farming to the loss of native plant habitats to illness caused by parasites—bees were dying off. This posed a threat to humans, since bees pollinate our food. Perhaps Pruitt-Igoe could provide a place to reinvigorate the partnership between bees and humans, creating a kind of sanctuary for both. Its story could end on a positive note, with one of the worst failures of public housing becoming a leading example of revitalization.

I thought I would transform the urban forest into a public preserve, cultivating community through on-site beekeeping and urban agriculture. The aim was to memorialize the past and provide opportunity for the future. But with Pruitt-Igoe’s fate tied up with controversial development plans—construction for a new “urban village” planned for the site still hasn’t begun—my scientific and artistic colleagues and I decided instead to initiate a one-acre pilot program that I called the Living Proposal, in the adjacent neighborhood of Old North. A Guggenheim fellowship and a Creative Capital artist’s grant provided funding to construct a sanctuary.

Working on a feral property surrounded by other vacant lots, we built our bee-friendly environment. We designed an apiary with two hives and garden beds, where we planted pesticide-free, pollinator-friendly native plants, vegetables, fruit trees and berry bushes so the bees would have a variety of food sources. Flowers bloomed, the pollinators arrived, and our beehives began to produce honey. Every season, the Living Proposal became more established, with strong and healthy hives. It became part of a bigger movement of urban beekeeping, committed to rebuilding the dwindling bee population. Scientists have found surprisingly high numbers of bee species in cities that are absent in nearby rural lands. According to St. Louis University’s Sustainability Science Lab, St. Louis is currently providing habitat for a third of Missouri’s bees. 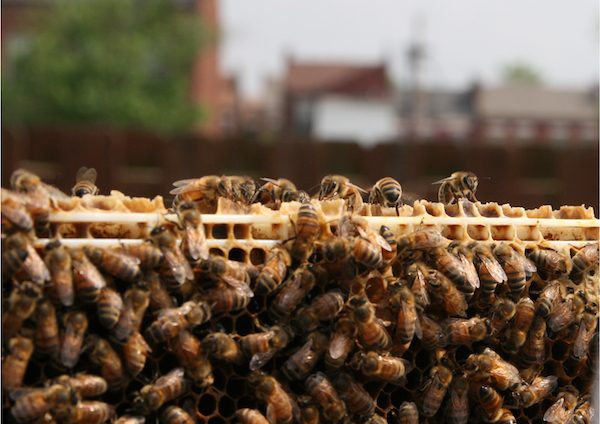 As the bees flourished in the sanctuary, it became time to incorporate our human neighbors into the hive. We developed the Young Honey Crew, a summer youth program that teaches students the importance of bees to our health. The students wear bee suits to inspect the hives, maintain the garden from seed to harvest, follow recipes to prepare food from the garden for lunch, and create artwork celebrating their connectedness to bees, the environment, and each other. The Young Honey Crew became especially meaningful in 2014 after the death of Michael Brown, the unarmed teenager who was killed by police in nearby Ferguson. With overwhelming tension and protests throughout the city, our students sought space to think, create, and talk. The Living Proposal became their sanctuary, a place for constructive contemplation.

From that point forward, our workshops focused more on community and collective thinking. In 2015 we invited our North St. Louis neighbor, Paulette, to initiate a senior women’s support group, the Wise Women. These queen bees of the community gather weekly to share a meal, support, and celebrate each other. Last year, with backing from Artpace San Antonio, we built the “Honey Trailer,” a vintage trailer designed for bee advocacy, health education, and job training. Starting this summer, the Honey Trailer—which is outfitted with solar panels, a grow room, a small kitchen a flat screen TV to provide information about bees, cooking, and our program—will visit schools, parks, festivals, and farmers markets around St. Louis and other cities.

Back in 2009, soon after I first started venturing into the abandoned forest, I made a sculpture, stacking defunct beehives to create a scaled-down version of a Pruitt-Igoe building. There were pheromone residues in the hive boxes, and they started to attract new bees. I was surrounded by the time the sculpture was completed. Not wearing any protective clothing I moved with hesitation, but my nervousness dissipated as the bees became less curious about my activity and more focused on the sculpture itself.

I saw the bees work as a group, build a haven, and use ideas to make honey: the alchemy of the studio within an ecosystem. The experience led directly to building the bee sanctuary. By creating a healthier environment for bees, we’re making a better environment for ourselves and our neighborhoods.