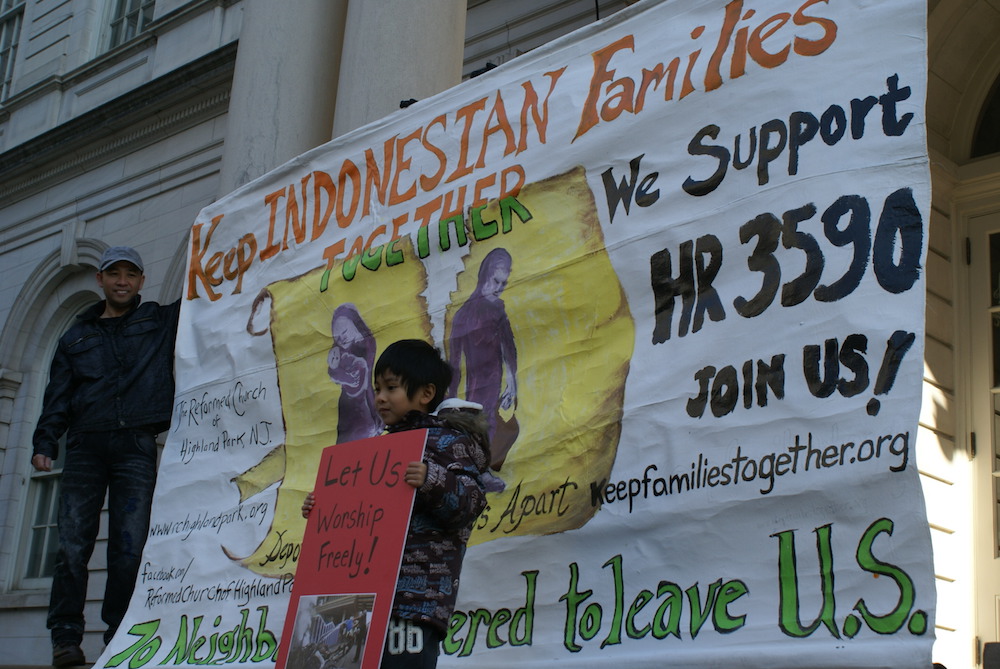 An Indonesian man and child brought attention to the plight of Indonesian Christians on the steps of New York’s City Hall in December 2011. Courtesy of Reformed Church of Highland Park.

In late 2012, I got a call from a church member. “Seth, Harry’s picking his daughter up from school? Is Sanctuary over?” he asked me.

It wasn’t, and Harry—an undocumented Indonesian immigrant we were sheltering in our church—wasn’t supposed to be out and about. In conversations with the media and our neighbors we had claimed, over and over, that the men we were protecting stayed put inside the walls of the church. It didn’t look good, my parishioner reminded me, for Harry to be walking around our tiny borough of Highland Park, New Jersey, the kind of place where the townsfolk know one another and can spot an outsider on sight. I knew he was right, but I also knew that from Harry’s point of view, picking up his daughter must have outweighed safety that day. I’d rather have bad optics than kill Harry’s soul, I told the church member.

We had been experiencing many of these uncomfortable moments. For 11 months—from the beginning of March in 2012, until mid-February in 2013—my congregation, the Reformed Church of Highland Park, offered sanctuary to nine Indonesians at risk of deportation. We offered it to keep families together and to keep the government from ruining lives and community, and because of our faith commitment to siding with the oppressed.

But we learned that while our sanctuary offered freedom from persecution and deportation, it was also a kind of jail. We were locking up free people—hindering the movement of men who had previously had at least the degree of “freedom” required to make a living, to cover the rent, pay for food, and otherwise contribute to their families’ well-being. They had the freedom to embrace—and be embraced—by their wives, to soothe their children, to be comforted by the feeling of family and community. Our friends might have been safe, but they were trapped, dependent on us for pretty much all of their material and emotional needs. Sanctuary turned out to be a perfect storm for depression and despair.

The refugees’ stories were tragic. Indonesians of Chinese descent, including many Christians, had first fled to the U.S. during the 1990s, targeted as scapegoats during the collapse of the Suharto regime. Saul, who was the first Indonesian refugee we sheltered, told us that his brother-in-law, a priest, was attacked in his own pulpit. Militants cut off his head and then torched his church. Saul’s story was not an anomaly. More than 1,000 churches in Jakarta and beyond were burned to the ground. 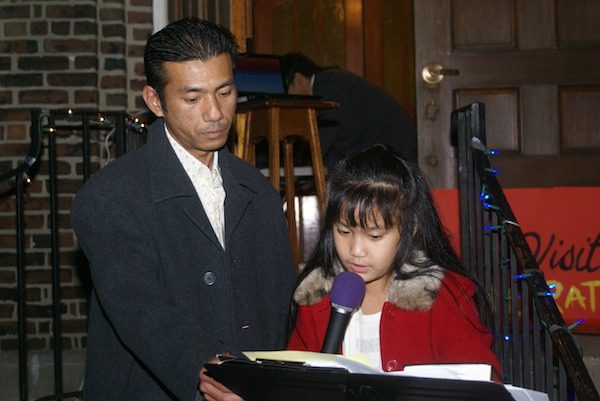 Many people fled, and thousands entered the U.S. on tourist visas. At least 3,000 came to New Jersey, where they got factory jobs. It was the late ‘90s, companies needed low-wage workers, and nobody was asking for work permits. The refugees overstayed their visas, with few consequences. Most opted not to file for asylum, in some cases for fear of government reprisal, or for lack of the language skills perceived to be necessary to make a successful case. But also, some later told me, Indonesians were surrounded by many other undocumented workers from many other lands. It seemed to be the American norm.

After 9/11, things changed, and by 2006, deportations were in full swing. The first people targeted were often the upstanding ones who had tried to work together with immigration authorities. One night in May of that year, in a town near mine, 35 Indonesian men were rounded up in a predawn raid. None were criminals. Almost all were fathers, with undocumented wives and some combination of older Indonesian and younger American children. We watched in horror as the men were all deported within a month. That was when our church vowed not to let the government abuse immigrant families anymore.

At first we took things slow, engaging in what I call “sanctuary behavior,” all within the law. After the raid, we invited the families of those who were taken—and who had fled their homes for fear that they, too, would be deported—to camp out at the church until they found new housing. We collaborated with immigration advocacy groups and supported pro-immigrant legislation. We visited detention centers, and held vigils. We forged a special relationship with U.S. Immigration and Customs Enforcement (ICE) in Newark that lasted for 11 months and brought temporary protection to many people.

It was only after that relationship broke down and agents started again coming—this time for Saul and others—that we began to wonder if it was time to take more drastic action. Our church board prayerfully and methodically considered the implications of going against the government. Ultimately we decided that the only way to help these men that would be truly useful, that might provide some protection from deportation, would be to lock them in the church.

Saul came first. In a few weeks, the others followed. By April we had transformed almost every Sunday School room into a bedroom, setting up futons that could be folded up during the day, so classes could still take place. At first, the sanctuary-seekers bathed in a kiddie pool; after a month, we installed two showers. We set aside a special section of the church kitchen for “sanctuary tenants.” Area churches brought food. One congregation donated a badminton net, which was put to frequent and appreciative use.

Our close-knit community rallied to the Indonesians’ aid. We worked to lift the men’s spirits, with games and hymn sings, and hosted dinners for their families on the weekend. Doctors provided free medical clinics. We kept watch for undercover ICE agents, who patrolled in unmarked cars, scouting for “fugitive refugees.” When a town manager expressed concerns about the church not being zoned for housing, we assembled a cadre of volunteers to stand sentry and conduct a daily “fire walk” to ensure everyone’s safety.

Sanctuary is beautiful, but messy. The narrative is written through real human lives. Those sheltered must have a voice, and the possibility to rewrite the narrative in ways that protect their hearts, minds and souls.

There were interviews: with CNN, with the New York Daily News, and with The New York Times. People were noticing what we were doing. It was exhilarating, for the Indonesians and for us. The media attention, the ICE sightings, the local support (and anger): all of it felt like important elements in the fight for justice.

But before long, the reality of what we were doing set in. Our guests were trapped, mere steps down the road from where their children played Little League and went to school—because of ICE, which would pick them up if they left, and because of us. I was putting myself and the church on the line, and they loved and respected us for it. They felt obligated to abide by sanctuary at its strictest definition, but, over time, the accumulated emotional weight of being shut off from free life was too much to take. People like Harry began to slip out to see their families.

Sanctuary proved psychologically draining for us, too. The hardest part was that there was no obvious end in sight. I felt very guilty about this, and struggled with extreme fatigue (I was also trying to keep up with my church responsibilities). When the men started to leave the premises, I had to unlearn sanctuary a bit. This could only work, I began to realize, if these men could escape from time to time to their true sanctuaries—their homes and wives and children. I had to learn to accept a possible accusation of fraud, as I publicly staked my reputation and the reputation of my congregation on the sanctity of physical sanctuary while privately knowing that those in my care were buckling under the rigidity of the claim.

As time dragged on we found ourselves not only supporting the men but also providing major rental assistance to their families, who were on the verge of losing their housing. One church couple renewed their vows to celebrate their 50th wedding anniversary and raised $5,000 to help with rent. That got us through a particularly difficult month. In all, we put at least $15,000 toward rental assistance.

I struggled to take things one day at a time. To be honest, it was way too scary to look into the horizon and not be sure how this would all end. In the end, I finally got through to Gary Mead, the head of Enforcement and Removal Operations for ICE, in Washington. He heard us out and instructed the ERO director in Newark to offer Stays of Removal to the refugees in our church. Our dilemma ended.

Now, nearly four years later, the Indonesians’ families are intact—a relief and a blessing—and life has returned to “normal.” Still, none have been granted citizenship. They would have benefited from Deferred Action for Parents of Americans, which never happened, or from other immigration reform efforts. I see them regularly. Some worship here. Some just stop by, to remember the blessings, and trials, of living here.

In recent months, with talk of renewed deportations, increasing numbers of congregations, colleges, and municipalities have said they want to extend sanctuary to their undocumented neighbors. I hope they do—whether that means providing physical sanctuary or engaging in creative, combative, and sustained “sanctuary behavior” such as protesting, advocating with officials, or vigils of support. I hope that as communities make this choice they’ll remember that sanctuary is beautiful, but messy. The narrative is written through real human lives. Those sheltered must have a voice, and the possibility to rewrite the narrative in ways that protect their hearts, minds, and souls.

And also, would-be sanctuary providers: Relish the moments of hope and possibility. Sanctuary can feel like jail sometimes, for those inside and for those offering protection. Thank God, for us, in the end, it felt like Shalom.