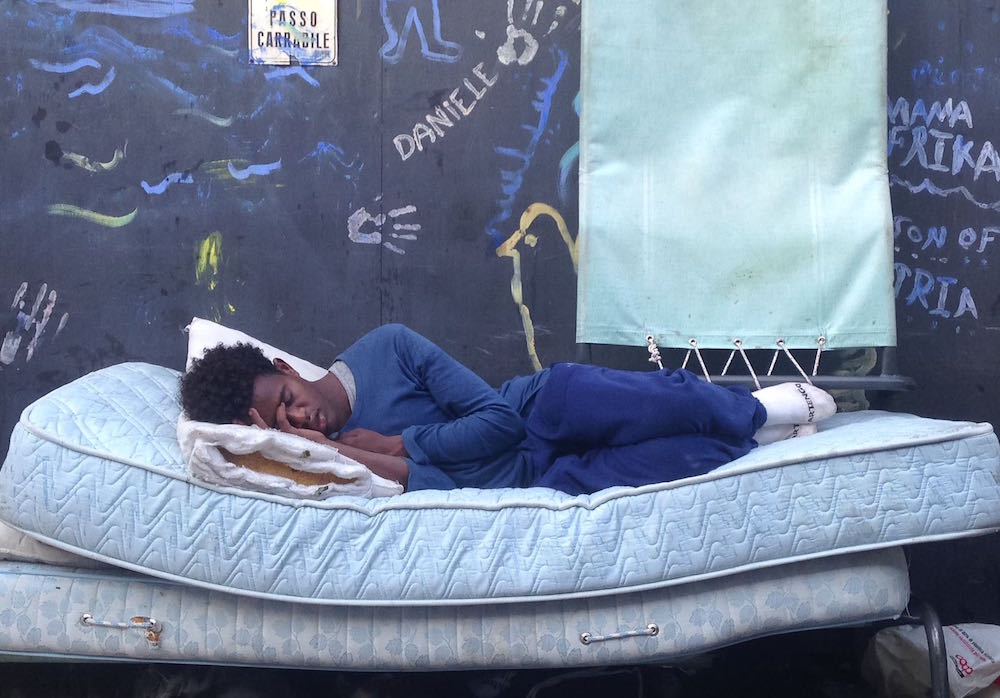 A refugee rests in the camp of Via Cupa in Rome, July 27, 2016. Photo courtesy of Viola de Andrade Piroli.

The Baobab Experience, inspired by the strong African tree whose long roots can stretch far away and, for us, even across continents and cultures, is the name chosen for a new way of welcoming migrants to Italy, based on empathy and respect for each individual rather than on an impersonal welfare mentality.

I work as an archaeologist, but two years ago the refugee crisis in my country moved me to make a dramatic change in my life and focus on helping those in need. Baobab was a brand new effort then, and I saw in it the possibility to transform the way we think about and treat migrants—a more human and humane approach.

I came together with other volunteers to provide migrants not only with a bed, a meal, and clean clothes, but with empathy, kindness, and curiosity about their lives, and with guidance and legal information about their status in Europe. Thus far our experience has been filled with challenges, but we are not giving up, and we hope our story will inspire others to adopt a similar model.

The Baobab Experience was born in the spring of 2015, near Rome’s Tiburtina train station, three miles east of the postcard locales where tourists flock. It was May 12, one day after the police had forcibly cleared migrants from the area nearby Ponte Mammolo metro station, where refugees from the Middle East, Africa, and Asia, many of them survivors of arduous and terrifying journeys across the Mediterranean, had been congregating for months.

Chased out of their temporary shelter, hundreds of migrants poured into a cultural center in Via Cupa, a few blocks southeast of the train station. The reaction of Rome’s citizenry was immediate: In just a few hours, thousands of donations were brought to the center, and dozens of volunteers showed up, ready to help in any way they could. Some would pop by to donate some basic necessities and end up spending the whole day in Via Cupa, helping out. Donors and volunteers of different ages, origins and experiences would work side by side for hours.

In just a few weeks, Via Cupa became a unique place, with a vital energy springing from the mix of cultures animating it. It also was a place where people who had spent months fleeing for their lives finally could stop and repose in relative calm and safety—a place where they knew that, when they talked, someone would be listening. That deep, reciprocal act of listening forged the bonds that gradually arose between the migrants and us.

While we were listening, Rome’s political institutions stayed silent, not wanting to get tangled up in such a complex situation. During that summer of 2015, Baobab welcomed a total of 30,000 migrants. Doing our best to accommodate 800 people at a time in a space that had been built to host 250, we were constantly battling unsanitary conditions. We began to speak out publicly about the struggles we faced, and to meet with local government officials to begin searching for solutions.

The Baobab Experience continued to grow, as our volunteers began to forge solutions to our many logistical challenges, and to organize assistance and activities for our migrant residents. They called weekly meetings, organized indoor gathering spaces, and set times for clothing distribution and meals—our volunteer cooks were preparing more than a thousand meals a day. They assembled “arrival and leaving kits” with basic necessities, such as soap, toothbrush, toothpaste, snacks, fruit juice and water. A basketball hoop and other sports equipment were brought to the center, and migrants were given tours of the city to help orient themselves in their new home.

We were constantly on the move, from parking lot to parking lot, trying as hard as we can to guarantee the essential needs of those migrants who have stayed and who are constantly being chased out and stopped by police demanding identification.

Meanwhile, other civic and charitable groups provided their skills and expertise, as well as space to collect, sort, and store donations. A sanitary squad and a legal team were created. Cultural mediators helped us to communicate across language barriers. Using a world map at the center’s entrance, we encouraged migrants to share their personal stories by pinpointing the routes of their journeys to Europe—and to plan the next passage to their final destinations.

But as autumn turned to winter, our situation changed. With cold weather discouraging migrants from making the perilous sea crossing, the number of new arrivals began to drop dramatically.

In December of 2015 the city shut down the center, with the promise that a new site with adequate living conditions would soon be found. But this promise never came to fruition—so Baobab had to begin welcoming and providing practical and legal information to the continuing trickle of migrants in the street, in front of the closed gate of what had been our center. This was when our group of volunteers evolved from being just a group of citizens brought together by their own solidarity, to formally establishing themselves as an association in order to be able to engage in formal talks with the city government. The Baobab Experience, up until then an informal collection of like-minded people, was formally born.

When spring came in 2016, and heavier migrant traffic resumed, we still had only the outdoor space of Via Cupa to welcome and shelter our new wave of guests. We began pitching tents in the street, and in a handful of days an informal camp was operating. Its conditions were even worse than those in the center. There was no running water, no electricity, and no kitchen to prepare meals.

And yet the Baobab spirit remained steadfast. If anything, it was more determined than ever not to give up our fight for human dignity. Although we had no building to offer the 20,000 people who arrived between April and September 2016, our feelings of brotherhood and sisterhood deepened during those days and nights together on the street. During uneasy nights, we turned to singing and dancing to lighten our mood and pass the dark hours. Once again, the strong support of the citizenry of Rome helped sustain us, and we also gained the backing of Italian and international cultural associations, which launched a petition supporting us.

Officials continued their threats of clearing the camp, and periodic, forced round-ups of migrants by police seeking identification documents never stopped. Migrants spent many anxious nights in police headquarters, often with no legal or cultural mediation to assist them. Despite our ongoing negotiations with Rome’s new city government—which, yet again, had promised a rapid solution to the problem—no alternative to our outdoor, informal camp has emerged.

On the last day of September 2016 the camp was cleared for good. Tents, gazebos, all the donations we’d received, and all the migrants’ personal effects were dumped by the police in the abandoned, locked building of Via Cupa, with no possibility for either volunteers or migrants to retrieve them.

From that moment on, we have been in our “itinerant phase,” constantly on the move, from parking lot to parking lot, trying as hard as we can to guarantee the essential needs of those migrants who have stayed and who are constantly being chased out and stopped by police demanding identification. It feels like a manhunt aimed at scaring and scattering us, trying to push us to exhaustion so that we will give up. For our part, we’ve given up on trying to negotiate with the local government, as every promise they’ve made to us has been broken.

But Baobab will not end. We have vowed to each other that Baobab will keep transforming itself in whatever ways are needed so that we can keep doing our essential work. Since the end of October 2016 we have been welcoming migrants in an unused public square behind Tiburtina train station. We continue giving a Baobab welcome to migrants whose long journeys have brought them here to Rome, trying to give them what we value most: the recognition of their precious individuality, and the desire to hear and keep alive their stories and their spirits.