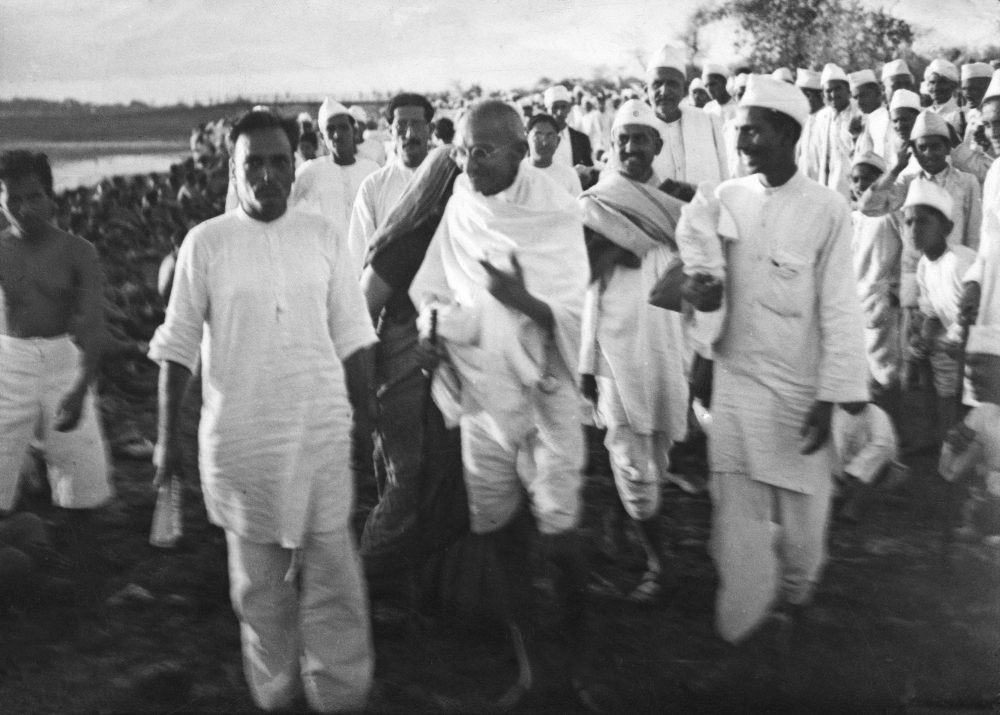 Mahatma Gandhi gives the last instructions on the beach near Dandi, India, as he and his supporters get ready to demonstrate at the Salt Satyagraha (Salt March) in which he and demonstrators marched 241 miles to the sea to make their own salt, April 6, 1930. Britain responded by arresting over 60,000 people. Photo by W. Bossard/Associated Press.

Early in the 20th century, M.K. Gandhi began to experiment with a novel form of political action, which he termed satyagraha. Gandhi first used satyagraha to protect the rights of Indian migrants in colonial South Africa in a series of campaigns over the course of a 20-year struggle. After World War I, Gandhi, now living in India and part of the movement for Indian independence, proposed satyagraha on a truly mass scale: a nationwide campaign of “non-cooperation” with British authorities. He asked Indians to boycott foreign cloth and withdraw from state offices and schools in order to disrupt the everyday machinery of government and expose the fragility of British claims to authority.

A decade later, in 1930, in his most famous and dramatic campaign—the salt satyagraha—Gandhi again used mass protest to make visible the illegitimacy of British rule. This time the tool was mass civil disobedience. Gandhi asked Indians to defy the salt tax, the government monopoly on the production and sale of salt. Disobeying this tax was too innocuous to justify violent state repression. But when undertaken on a mass scale it also proved impossible to ignore. Moreover, the salt tax disproportionately burdened the poor and became an evocative symbol of British disregard for Indian lives and interests.

Gandhi began the salt satyagraha by leading a group of his closest associates in a thrilling 25-day, 240-mile march. Each day the suspense around Gandhi’s imminent arrest and popular unrest excited public attention. The campaign culminated in nationwide boycotts and demonstrations with thousands upon thousands of arrests. Moreover, graphic accounts of the brutal beating of unarmed protestors circulated in the global media, turning public opinion against the British and bringing Gandhi and satyagraha to the world’s attention.

In the century since, satyagraha has become better known as nonviolent direct action or simply nonviolence, and it has spread globally, establishing itself as a potent force in the U.S. civil rights movement, the anti-authoritarian struggles of the 1980s and 1990s such as the “people power” movement in the Philippines and Czechoslovakia’s “Velvet Revolution,” and the Arab Spring of 2011. And yet, for all its success, what exactly nonviolent action is, and how it works, has become less and less clear, an ambiguity that could hamper its usefulness in a landscape increasingly characterized by intense economic and political polarization. 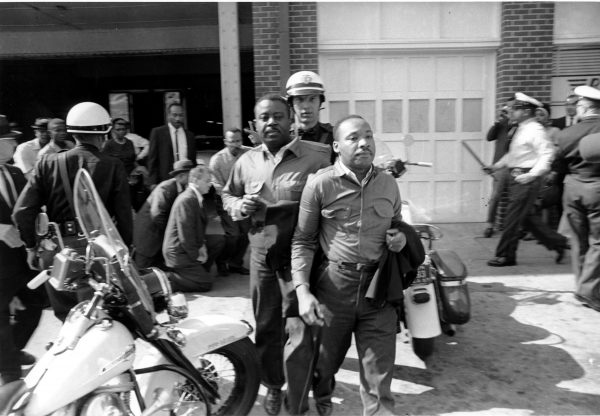 Rev. Ralph Abernathy, left, and Rev. Martin Luther King Jr., right, are taken by a policeman as they led a line of demonstrators into the business section of Birmingham, Ala., on April 12, 1963. Courtesy of Associated Press.

When we picture nonviolent protest today, we tend to imagine vast crowds occupying public spaces, marching, waving signs, chanting slogans, confronting state authority. For Gandhi, however, nonviolent protest required something more than the peaceful mobilization of large numbers of people. Its aim was not just to pressure the state but to move political opponents to rethink their positions and commitments. And to do that, Gandhi believed that protestors had to display and demonstrate disciplined fearlessness and a willingness to sacrifice. It was this kind of commitment that would work to persuade a political opponent by “opening his ears, which are otherwise shut, to the voice of reason.”

But is such a process of political persuasion truly possible? Ironically, nonviolence’s global popularity has increased alongside a decline of conviction in the power of nonviolent persuasion. Both the meaning of the word “nonviolence” and the concept of nonviolence itself have become ambiguous in the years since Gandhi’s great successes.

Globally, nonviolence has become defined as a set of universal and portable political techniques, but its goals have changed significantly over time. The first generation of activists shaped the nonviolence of the civil rights movement in the U.S. and the anti-nuclear protests in the U.K. They successfully built up a repertoire of protest techniques that captured and developed core elements of Gandhi’s original project. Successful nonviolent direct action came to be defined by two key aspects: disruption and discipline.

Disruption on a mass scale is without doubt the most celebrated feature of nonviolent resistance. Non-cooperation and large-scale civil disobedience, by using tactics like the mass boycott, can draw attention to unjust laws. Consider the bus boycotts and lunch counter sit-ins of the civil rights movement, which so effectively exposed the indignities of segregation. In both cases, the symbolic elements were tied closely to practical experiments in interrupting day-to-day activities. 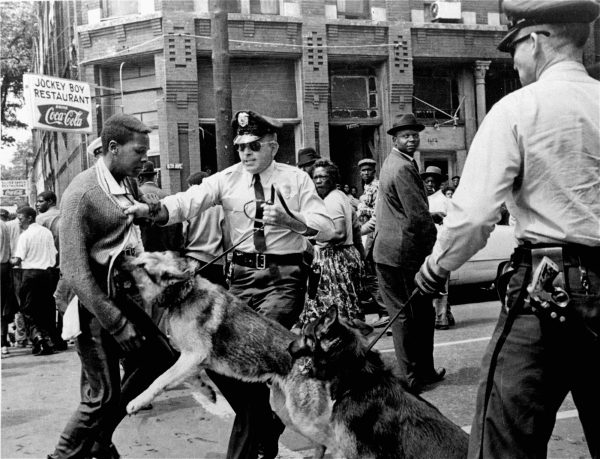 In this iconic image published in The New York Times on May 4, 1963, a 17-year-old high school student is attacked by a police dog in Birmingham, Ala.
Photo by Bill Hudson/Associated Press.

Over time, we have learned that nonviolence can draw participation from large numbers of people more effectively and efficiently than armed movements ever could. By either withdrawing participation and popular consent or criticizing and defying specific institutions and laws deemed unjust, successful nonviolent campaigns can puncture the legitimacy and authority of the state as such.

For protests to be nonviolent, however, disruption itself has to be disciplined. Protestors have to show restraint, often through a willingness to sacrifice and suffer. This includes everything from the discipline of walking and marching for weeks to stoically resisting the provocation and violence of police and vigilante groups. Instilling this kind of discipline and restraint were the main focus of the nonviolent training sessions and the codes of conduct that both Gandhi and Martin Luther King Jr. insisted upon when they embarked on large-scale campaigns. The need for discipline also informed the preference for silence, prayer, and song over fiery speeches and the shouting of slogans in nonviolent protests.

In Gandhi and King’s view, disciplined action would dramatize injustice and awaken moral conscience. For Gandhi discipline showed self-mastery; for King it showed dignity. For both men these moral ideals were key to the political and strategic success of the protests, which could force a recalcitrant opponent or public to stop and look critically at themselves, to ask whether their commitments and practices match their ideals. While confrontation, intimidation, or coercion might force opponents to reckon with protesters, only nonviolence had the potential to convert opponents.

The more confrontational the tactic—when the threat of provoking violence was at hand—the more crucial it was for nonviolent protest to maintain discipline. This unique combination would confuse and off-balance state responses to insurgent protest, as was powerfully demonstrated during Gandhi’s salt satyagraha and King’s Birmingham campaign.

For Gandhi discipline showed self-mastery; for King it showed dignity. For both men these moral ideals were key to the political and strategic success of the protests, … While confrontation, intimidation, or coercion might force opponents to reckon with protesters, only nonviolence had the potential to convert opponents.

Nonviolence entered a new era after King’s assassination, when radical social movements gained traction, and the importance of discipline and restraint dramatically declined in the late 1960s. To my mind, this has been the most fundamental but overlooked shift in the theory and practice of nonviolence. Partly out of confidence, partly out of impatience, radical protest instead celebrated what were considered to be more confrontational, transgressive, and authentic expressions of dissent and opposition. The nonviolence of Gandhi and King, with its emphasis on restraint, suffering, sacrifice, and persuasion, was increasingly characterized as a principled commitment to nonviolence but not a strategically successful one.

Nonviolent theorists and activists, including the influential Gene Sharp, today advocate for a more narrowly conceived “strategic” nonviolence. They celebrate the disruptive, confrontational, militant aspects of the history of nonviolence. And in so doing, what counts as nonviolence has expanded, most often in the direction of more elastic definitions, to the point where anything short of armed rebellion seems to count as nonviolent.

Clearly, collective programs of disruption have proven especially effective at undermining state legitimacy and toppling authoritarian regimes. This was the core lesson of the successive protest strategies of the velvet revolutions from Eastern Europe to Tahrir Square. And extreme or confrontational tactics, like those pioneered by AIDS Coalition to Unleash Power (ACT UP) in the 1980s and ’90s, can draw attention to injustice and build solidarity within a movement.

But in turbulent political times, when the primary goal of protest might well be to overcome polarization by reaching out to and persuading fellow citizens, disruption may prove much less useful. In India today, for example, Gandhian-style nonviolent marches still take place but they’re paradoxically used by political parties to intimidate and provoke. Whether these are genuinely nonviolent is rarely discussed. Even Anna Hazare’s famous fast against corruption broke most of Gandhi’s explicit rules because it was coercive.

In a time of escalating inequalities and resentments, we need to find a politics that enables us to relate to fellow citizens with dignity. To do this we should recover the lost traits of nonviolent discipline and restraint, remembering that nonviolence cannot simply be a symbolic or rhetorical gesture. The details of the organization and enactment of protests create a space for the difficult work of persuasion to take place, creating potential for a shared democratic political life. At its best, this disciplined nonviolent action can incite a reluctant populace to engage in acts of moral re-evaluation, repairing some of our divisions.