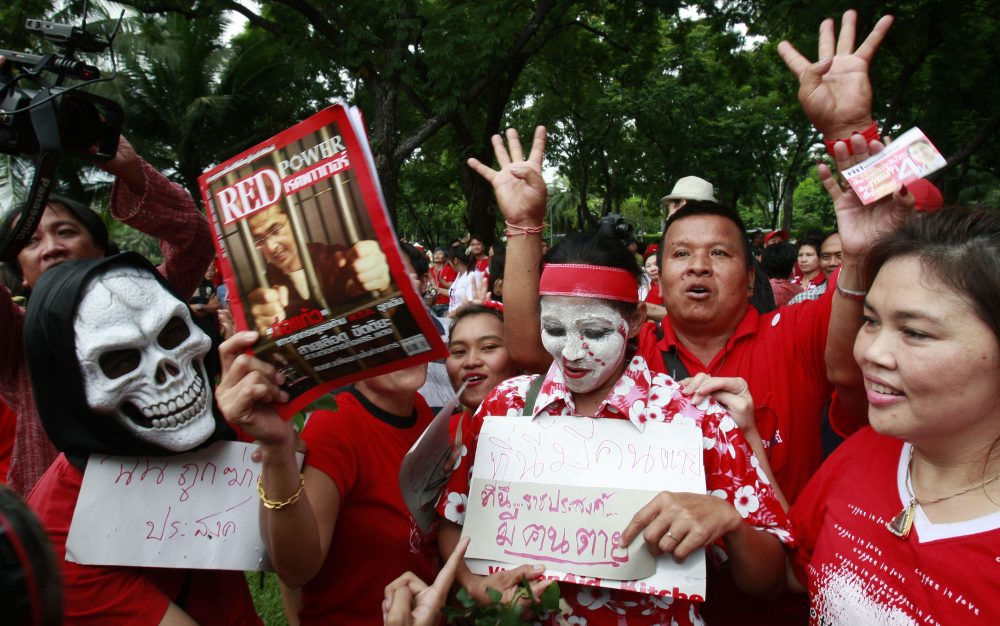 Members of the United Front for Democracy against Dictatorship (UDD) or Red Shirt put makeup on their faces at Lumpini park in Bangkok, Thailand, July 2010. About 200 UDD members took part in the gathering to show their unity and to defy the country's security act. Photo by Apichart Weerawong/Associated Press.

When Egyptians gathered in Tahrir Square to protest the regime of Hosni Mubarak in 2011, they brought with them a funny weapon against the guns and tear gas of the military: a sense of humor. They carried cartoons, sang parodic songs, and renamed the central garbage heap after one of the president’s agencies. In the short term, their humor was a powerful vehicle for nonviolent struggle against a potentially violent regime, and it followed in the footsteps of similarly antic protests in places as disparate as communist Poland and the Bush-era United States.

Humorous protest is a very sophisticated—and even tricky—tool to deploy against authoritarian regimes. As Hannah Arendt wrote in On Violence: “The greatest enemy of authority … is contempt, and the surest way to undermine it is laughter.” But laughter has political advantages as well as limitations, as I have discovered while studying its impact in Serbia and in my home country, Thailand.

Serbia offers a striking example of how humor can be used to resist an oppressive government. In the 1990s, this southeastern European nation faced numerous crises stemming from the breakup of the former Yugoslavia, including wars with newly independent neighboring countries, international sanctions, surging domestic crime rates, and the fearsome rule of Slobodan Milošević, the president of Serbia and, later, the Federal Republic of Yugoslavia. Many civic groups took to the streets to challenge the rule of Milošević, who retained strong support among rural Serbians. A heavy NATO bombing campaign in 1999 and mounting international pressure had weakened Milošević’s authority. 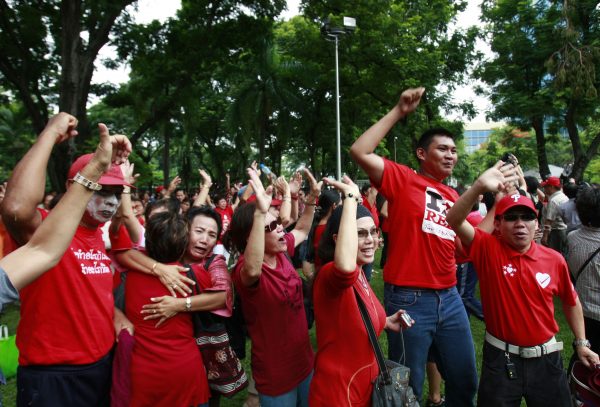 Members of the United Front for Democracy against Dictatorship (UDD) or Red Shirt cheer for news report of the by-election at Lumpini park in Bangkok, Thailand, July 2010. About 200 UDD members took part in the gathering to show their unity and to defy the country’s security act. Photo by Apichart Weerawong/Associated Press.

But it took the subversive humor of the Otpor movement (the Serbian word for “resistance”) to finally oust Milošević. Otpor did satirical street theater, parodic protests, and carnivalesque events—all of which were fun and easy to participate in. One of their most famous street skits was “Beating of a Barrel.” In the middle of Belgrade’s busy pedestrian streets, activists placed an empty petrol barrel with an image of Milošević on it. They invited passersby to hit the barrel with a stick they provided. Soon people were lining up to beat the barrel to show their resentment toward the regime. These actions conveyed a critical message to the Serbian public: Milošević was not to be feared, he was no longer legitimate as a leader, and there was a political alternative to him.

As the confrontation escalated, Otpor ratcheted up the ridicule. When the regime baselessly accused Otpor of being a terrorist organization, the activists didn’t respond by defending themselves with words, but instead dressed up in theatrical military uniforms and paraded around toting toy rifles. The crews walked through the streets ignoring traffic signs. Afterward, they proclaimed ironically, “This is a terrorist act because we didn’t obey the traffic sign. This is the kind of terrorists we are.”

Otpor also organized rock concerts and parties (sometimes joined by celebrities) to encourage people across Serbia to imagine a different Serbia without wars, poverty, and political instability. In October 2000, the persistent nonviolent campaigns waged by Otpor and other opposition parties helped remove the weakened Milošević from power. Leading activists from Otpor continued their nonviolent crusades, transferring knowledge of nonviolent protest strategies to other movements in countries such as Ukraine, Georgia, Lebanon, Iran, the Maldives, Burma, and more recently Egypt. 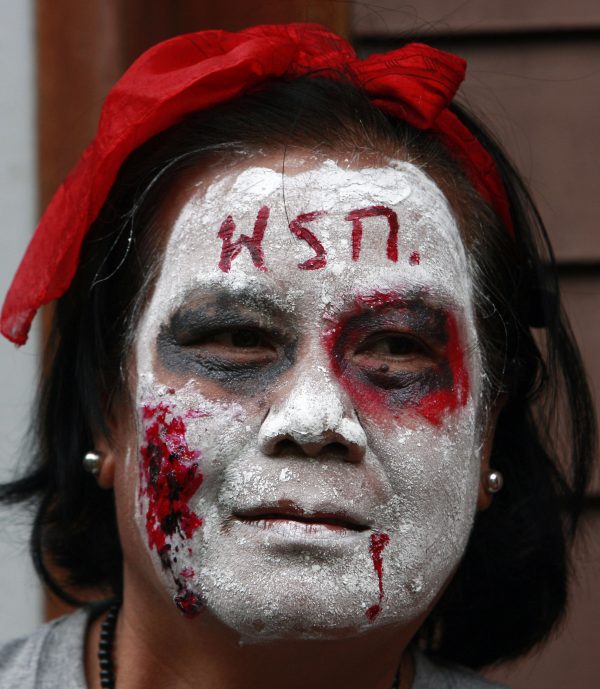 A member of the UDD or Red Shirt puts makeup on her face as a dead person at Lumpini park in Bangkok, Thailand, July 2010. Photo by Apichart Weerawong/Associated Press.

A decade later, humorous tactics showed up in Thailand, an unlikely spot because it’s a place where anti-elite jokes and gossip are considered weapons of “the weak.” But in 2010, a loosely-organized movement emerged that used humor to shake up a society that has been politically and economically dominated by the monarchy, army, and aristocratic elites for decades. Since the early 2000s, an alternative, democratic political party has gained increasing support. It was led by Thaksin Shinawatra, a Thai businessman who served as the country’s prime minister for five and a half years before being overthrown in a 2006 military coup. The party’s supporters, from the rural North and Northeast of Thailand, where inequality hit hardest, are sometimes known as the Red Shirts.

The political establishment saw this as a threat, mobilizing their partisan supporters—who became known as the Yellow Shirts—to the street, increasing the bitter political polarization that still grips Thailand today. In 2010, pro-establishment government forces cracked down on the anti-establishment Red Shirts, raising fears that the protesters would morph into an armed underground guerrilla group. Others worried that the government’s new draconian laws prohibiting public assembly would silence all opposition.

Out of this frightening moment came a group named Red Sunday. Led by Sombat Boongnamanong, a social activist, freedom fighter, and former theater performer, Red Sunday’s activities were intended to create a friendlier public face for opposition activities that wouldn’t run afoul of the government. They fused everyday activities (such as dining, donning certain outfits, shopping, and exercising) with political protest. In this way, Red Sunday’s demonstration did not look exactly like a conventional protest, except that they often used the color red. 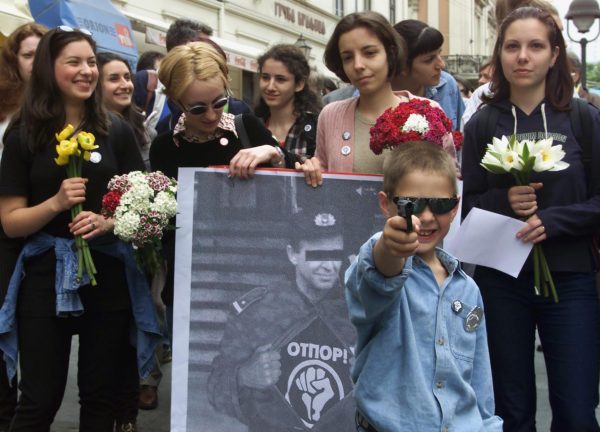 An unidentified Belgrade boy holds a plastic toy gun mocking police officers in Belgrade, Serbia, May 2000. Members of the pro-opposition student group Otpor, or Resistance, gave out flowers to policemen and appealed for their restraint in the worsening government crackdown on political opponents. Photo by Darko Vojinovic/Associated Press.

One of Red Sunday’s most memorable skits was an aerobic dance at the biggest public park in Bangkok in July 2010. Around 400 participants dressed in red sports outfits and ghost makeup intended to remind the public of the crackdown that had taken place few months ago. Like other park visitors, they gathered for a group aerobic dance routine popular among Thais. But theirs was unusual. The “instructor” led them in dancing to Red Shirt songs and in different silly steps that made the multigenerational crowd laugh and captured the attention of passersby. At other times, protesters would dress as ghosts, walk downtown, and hop on the monorail, reminding other passengers of the regime’s repressiveness. Protesters also would meet up for a picnic in a public park, go shopping at the mall en masse, or ride bicycles through Bangkok streets.

Red Sunday’s small acts of defiance carved out a space for political activism in a time of repression and despair, and normalized the act of resistance for Thailand’s middle class, which has traditionally supported the political establishment. The regime would have appeared ridiculous if it had cracked down on a bunch of aerobic dancers. This tactical advantage, called the “dilemma action” because of the bind it places the leadership in, is particularly useful for activists trapped under authoritarian—and unimaginative—rule. Red Sunday’s playful actions paved the way for the resurgence of the anti-establishment movement, which won an important electoral victory in 2011.

The experiences of Serbia and Thailand show how humor can be deployed differently, and toward different ends. In Serbia, Otpor used humorous protest actions in a systematic way, with a well-crafted strategy of nonviolent defiance, with hundreds of local chapters across the country attracting broad-based support. As a result, as the number of humorous events increased, their impact was multiplied. In contrast, Thailand’s Red Sunday was an ad hoc group working on a smaller scale. 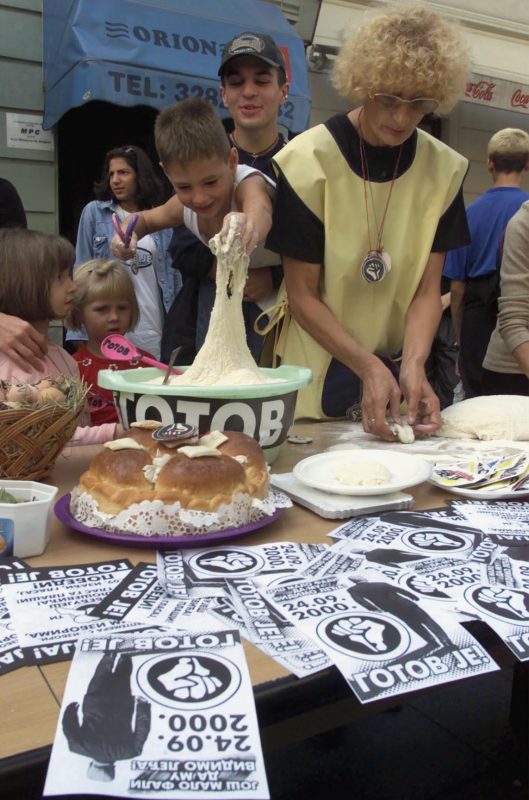 Serbian children play with flour around an activist of the anti-government group Otpor, or Resistance, during a protest action entitled “Let’s spice up the food,” meant to bring awareness of the importance of Yugoslav national elections in September 2000 in Belgrade. Photo by Darko Vojinovic/Associated Press.

More importantly, while Otpor used humor offensively, Red Sunday used it defensively. Otpor wanted to step up the political momentum to topple Milošević and transform the Serbian political landscape. Red Sunday’s humor, on the other hand, sustained nonviolence as a movement when the Red Shirts were on the brink of becoming militarized, a transformation that could have undermined their long-term goals by provoking another government crackdown.

But the two campaigns also had a lot in common. Both helped reduce fear among the populace and induced participation in protest activities. They also drew media attention to protest movements, increasing publicity and political momentum. And they reversed the effects of repression by exposing the incongruity between a regime’s claims and the reality of its rule.

Finally, both demonstrate how humorous protest can offer a space for utopian enactment: encouraging people to imagine other political possibilities through parties, concerts, and festivals. This ability to imagine is extremely crucial for social change. People can be politically submissive if they think there is no alternative and change is not possible.

For activists, there are no limits to the supply of humor—after all, it comes from deep within our different cultures—but there are limits to how it can be used. Joking “with” others rather than “at” others is important, as is knowing what crosses the line and violates norms, and what does not. Jokes do not fly if they are out of context. Activists who know what, culturally, triggers laughter can use that knowledge to their advantage, even against the most seemingly omnipotent governments.