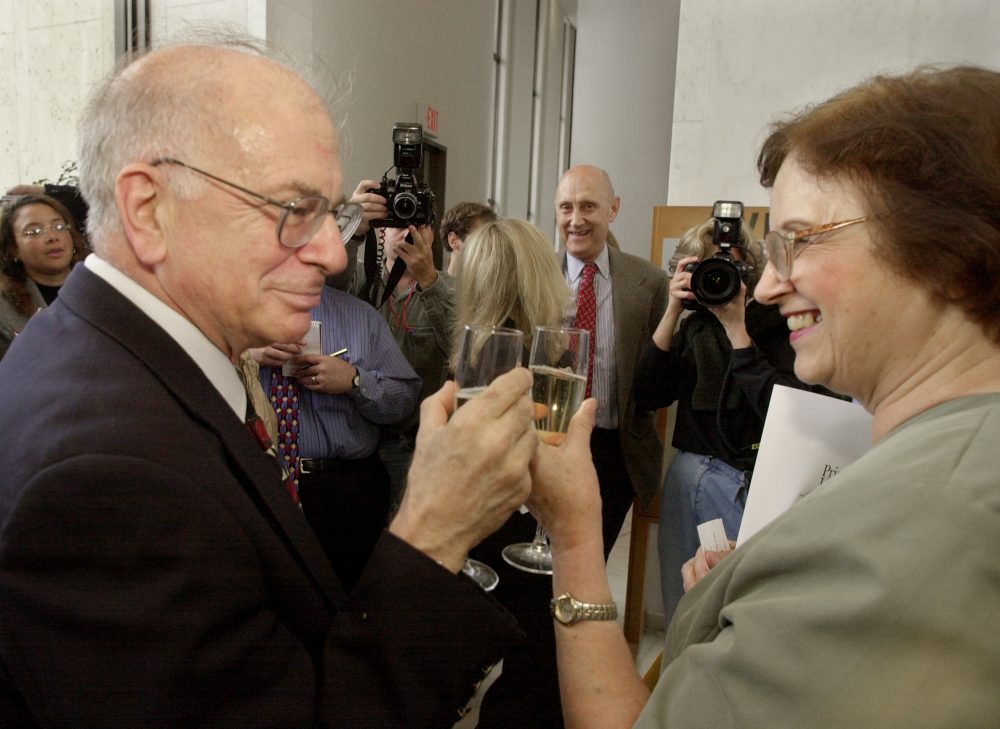 Psychology professor Daniel Kahneman, left, a U.S. and Israeli citizen based at Princeton University, and his wife Anne Treisman, also a psychology professor at the university, have champagne following a news conference at the school following his winning of the Nobel prize in economics in 2002. Photo by Daniel Hulshizer/Associated Press.

Where do big new ideas come from—the kind that break the mold and change how we see the world? As a sociologist, this has long been an interest of mine. So I was excited to read Michael Lewis’ new book The Undoing Project, which tells the story of Daniel Kahneman and Amos Tversky, the Israeli psychologists whose work on decision-making helped convince economists—and everyone else—that people aren’t nearly as rational as economic theory would predict. Kahneman and Tversky’s research on the cognitive errors to which we’re all prone was so transformative for economics that it scored Kahneman a Nobel Prize in 2002. (Tversky died in 1996.) How’d they come up with it? And what can we learn from their experience?

Lewis gives us a fast-moving tale with all the verve you’d expect from the author of Flash Boys and Moneyball. It focuses on how—for a time—two geniuses became joined at the hip.

Kahneman, nervous and self-critical, was a teenager when he fled occupied France with his family during World War II. Settling in Jerusalem before the 1948 war, he was part of the first wave of students to study psychology at the Hebrew University. He conducted psychological research for the Israeli army before heading off to graduate school at UC Berkeley.

Tversky, the child of Russian émigrés, had the self-confidence Kahneman lacked. A dazzling scholar with a mathematical mind, Tversky was also a paratrooper who’d been awarded a medal of bravery by Moshe Dayan, the Israeli general. After completing his military service, Tversky went to the University of Michigan for his Ph.D.

In 1969 Kahneman asked Tversky to speak in a graduate seminar he was leading in Israel. Tversky discussed a line of experimental research he’d learned about in Michigan. Subjects were presented with 20 poker chips, one at a time, said to have been drawn at random from bags containing different mixes of red and blue chips. (Lewis offers a slightly different description of the experimental setup.)

Researchers found that as people were presented with more reds or blues, they gave different estimates of the mix of each bag. If they were presented with a lot of reds, for example, they guessed the bag contained mostly red chips. Their guesses didn’t correspond perfectly with statistical theory—they were more conservative than the chip data warranted—but to the researchers who carried out the experiment, and to a young Amos Tversky, the lesson was that people had an instinctive understanding of probability.

Kahneman wasn’t impressed—and he told Tversky so. He thought it was obvious that if someone sees a lot of red chips, the guess is going to be “mostly red bag.” This isn’t necessarily because the human brain is hard-wired to understand odds. It could just be generalizing from something you’ve observed, with no clue at all as to the underlying mathematics.

Tversky was dumbstruck. Of course Kahneman was right. How had he not seen it before? But if humans don’t grasp odds effortlessly, how do they go about making decisions in situations where it’s important to understand probability, from investors gauging portfolio growth to doctors relying on imaging to make cancer diagnoses?

The answer, the two men came to conclude, is by relying heavily on intuition, perception, and cognitive shortcuts. This often leads to choices that are suboptimal from the perspective of strict rationality. Kahneman and Tversky began an intensely productive collaboration. In paper after paper they explored the errors and biases to which the human mind is prone. Together they laid the groundwork for an intellectual revolution not just in psychology, but also in economics, eventually providing the foundation for the new field of behavioral economics, which uses psychology to help understand economic behavior.

Kahneman and Tversky spent hours huddling together, devising new experiments, writing, being funny. As Lewis describes it, their innovative scholarship was one part the magic of collaborative synergy, one part sheer brilliance, and one part Israeli gumption: Getting human behavior right matters when your country faces existential threat every day.

This makes for a great story. But it left me wondering about the broader social roots of Kahneman and Tversky’s ideas.

You might not think where ideas come from is the purview of sociology. But early thinkers in the social sciences like Karl Marx or Max Weber—the German sociologist best-known for his writings on the Protestant work ethic—recognized that what intellectuals do and say can affect the course of society. Marx argued that intellectuals often develop systems of thought that advance the interests of the economic class they belong to. Weber held that the cultural values of an intellectual’s social group guide the direction of his or her thinking.

You might not think where ideas come from is the purview of sociology. But early thinkers in the social sciences like Karl Marx or Max Weber … recognized that what intellectuals do and say can affect the course of society.

Since these early theories, other ways of understanding the social origins of thought have arisen. For example, in a 1998 book the sociologist Randall Collins considered how the social networks of philosophers—who they know—influence their ideas. Collaborators are part of one’s network, but so are teachers, students, colleagues, and confidants.

One of the many philosophers Collins wrote about is Jean-Paul Sartre, who gave us existentialism, the mid-20th-century French philosophy extolling the virtues of authenticity. Sartre belonged to an elite intellectual network in Paris. Collins showed that existentialism took shape as Sartre brought together concepts and ideas that were already floating around in the café-society milieu.

Other sociologists study how ideas spread and make an impact. Marion Fourcade-Gourinchas and Sarah Babb, for instance, published a study in 2002 on why many countries abandoned Keynesian economic policies in the 1970s and 1980s, embracing free market theories and policies in their place.

Looking at developments in Britain, France, Mexico, and Chile, Fourcade-Gourinchas and Babb showed that policy makers glommed onto free market ideas partly because they thought deregulation could help their countries weather the economic turbulence of that period. But political reasons also mattered. In Chile, for instance, laissez-faire caught on after the 1973 military coup. General Augusto Pinochet, who wanted to get rid of the last vestiges of socialism, put the nation’s economic policies in the hands of Chilean economists who’d been trained at the University of Chicago, a center of free market thought. Free market thinking also had the backing of Chilean business groups concerned about their bottom line. If it hadn’t been for a complicated mix of economic, political, and cultural factors, these ideas wouldn’t have been able to make headway.

It almost goes without saying that if Lewis had written about Kahneman and Tversky from a sociological point of view, his book wouldn’t have been quite as exciting. Escaping from Nazis, jumping out of airplanes, forming platonic intellectual love affairs, showing up snide, complacent psychologists with pithy remarks—that’s tough stuff for sociological analysis to compete with. But something’s lost when you don’t pay attention to intellectuals’ social environments.

When I was reading The Undoing Project, I kept thinking about how economics became the queen of the social sciences in the post-war period. Scholars in other fields were jealous. Fame awaited anyone who could credibly show that the rationality assumptions at the heart of modern economics were, well, a stretch. (And that you could explain stuff better if you relaxed those assumptions.)

If you look at the all-time most cited social science articles, you’ll see two pieces by Kahneman and Tversky, but also a 1973 article called “The Strength of Weak Ties” by sociologist Mark Granovetter and an article published the same year by economist Oliver Williamson (another Nobel winner) titled “Markets and Hierarchies.” Both articles argued—against economic orthodoxy—that markets just aren’t places where efficiency and unbounded rationality reign supreme.

Around the same time, scholars of law and society were busy showing that law on the books is one thing; law as it’s actually practiced by judges, lawyers, and cops is quite another. And historian Thomas Kuhn had already come out with his famous account of paradigm change—claiming that even in science rationality doesn’t always prevail.

Kahneman and Tversky must have sensed that they’d discovered a potent line of attack against standard economic thinking. Their ideas thus had a lot to do with the state of the intellectual field at the time, the social and academic world they navigated: It provided powerful incentives for their collaborative work, and gave them an opening they seized.

As to why their ideas have gained so much traction recently with policymakers and the public (Kahneman’s 2011 book, Thinking, Fast and Slow, was a runaway best-seller), one hypothesis is that knowing something about behavioral economics has become a mark of status in business and political circles. On the heels of wild stock market valuations in the 1990s, the crazy real estate bubble of the early 2000s, and the subsequent crash, conventional economic models haven’t been looking so good.
Behavioral economics is a plausible alternative, and if you devise a new marketing campaign or a set of public policies based on behavioral premises, you’ll look pretty smart.

Stories about geniuses with big ideas are fun to read, but they’re not necessarily the whole story. Unless you have a sense for the social context in which ideas develop and spread, it’s impossible to get a proper handle on how much intrinsic value an idea may have versus how much it may seem to have in light of social factors surrounding it.